I knew that washing dishes in Antarctica would be cold -- but I didn't know it would become a life-or-death version of "Survivor." 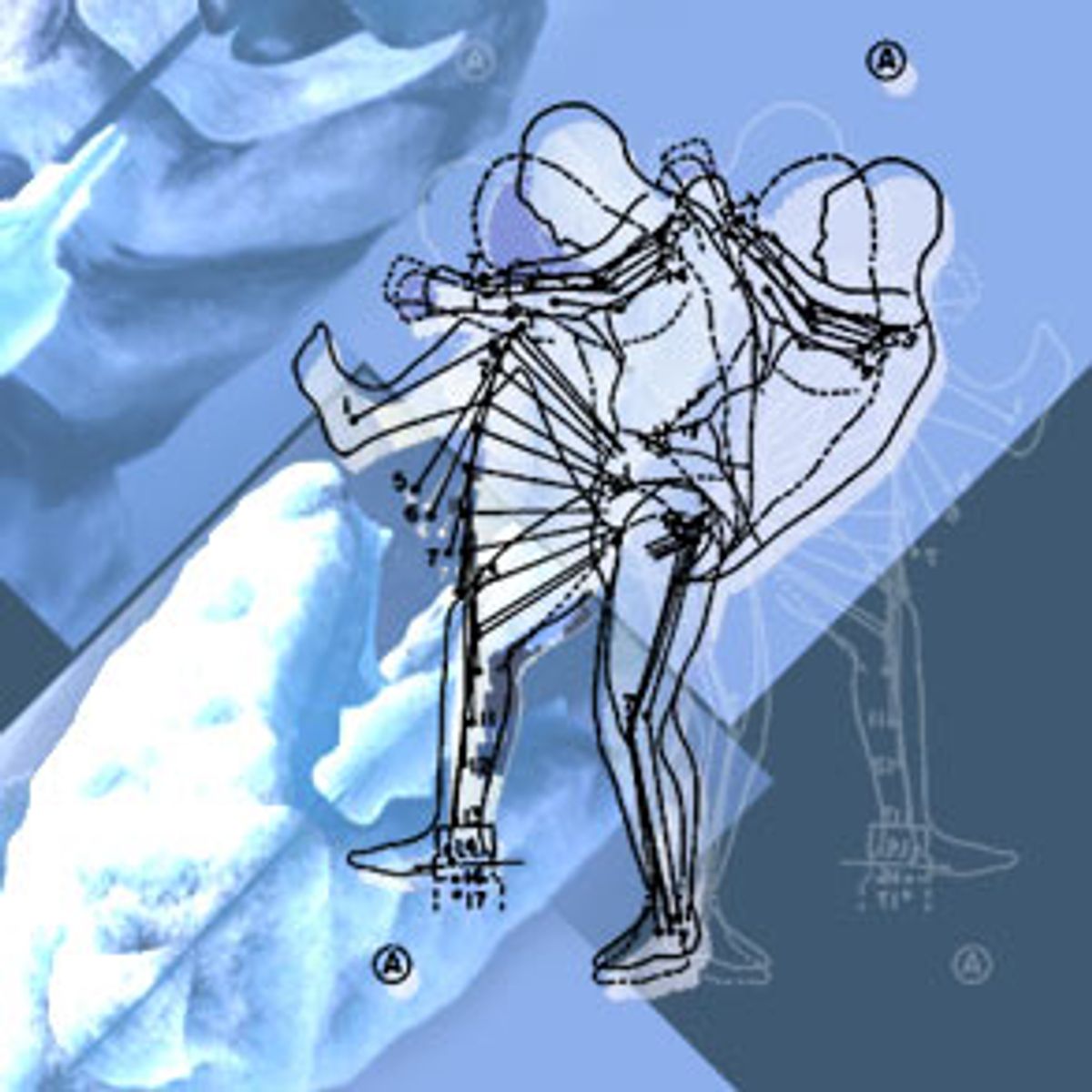 The ice runway at McMurdo Station is not only at sea level, it is the sea -- the Ross Sea. The ice has been shaved so that planes can take off and land on the ocean's surface. I didn't know it at the time, but as I stepped from that frigid runway into an airplane headed for the South Pole, I was leaving behind the elements that would soon save my life: sea level and oxygen.

About five months ago I left Salt Lake City to live in Antarctica. I'm not an adventurer, world traveler or thrill seeker of any kind. I've never gotten a passport. Nonetheless, I was in the mood for a change when the National Science Foundation offered me a chance to occupy a windowless room in Antarctica and wash dishes for 981 people. The contract guaranteed a place to live, $4.88 an hour, and the opportunity to work 60 hours a week cleaning up after scientists in a town called McMurdo Station, 900 miles north of the South Pole. I took it.

Not long after I landed in McMurdo, my skills were needed at the science station at the South Pole. "You may not be the best dishwasher in McMurdo," my boss told me, "but you're the one I'd like to get rid of. You're on the next C-130 flight to the South Pole. Pack your bags."

Shortly after I arrived at the South Pole, I was plagued by shortness of breath, headaches, difficulty in breathing, confusion. I knew everyone else there was breathing the same air I was; but it seemed their air had more oxygen in it. I talked to a few people about my problem until I was blue in the face. The consensus was that I should see Will Silva, get hooked up to oxygen, then possibly face the cold, hard fact that I couldn't hack it and go back to sea level.

A word about Silva: If you've read the book "Ice Bound" about Jerri Nielsen, the doctor who battled her own breast cancer at the South Pole, or if you've read almost anything about current happenings at the Pole, the name "Will Silva" is bound to show up. When I left for the South Pole, he was one of my heroes (and would soon be again).

But I put off seeking his help. Living at the South Pole is like being on the TV show "Survivor," except we wear parkas instead of swimming suits. If I went to the doctor, I could be evicted from the bottom of the world. That was not going to happen. My flame would not be snuffed out because I couldn't breathe.

So I went to work scrubbing dishes, ignoring the preliminary signs of potentially lethal pulmonary edema, or high-altitude sickness, which causes lungs to fill with fluid and creates extreme disorientation.

A TV screen in the galley at the South Pole broadcasts updates of the temperature, wind chill and barometric pressure. The temperature always seemed to be minus 47 with a wind chill near minus 70. Although the altitude of the pole is 9,301 feet, the barometric altitude read 10,400-11,000 feet.

I'm from Salt Lake City, certainly not the Mile-High City, but 6,000 feet or so above sea level. And, although I'm not an avid mountain climber, I have hiked higher than 11,000 feet at some point or another. Hadn't I? Eleven thousand feet seemed too low for altitude sickness.

Then, as I lay in my bed one Friday night, breathing in gasps that sounded as though I was sucking air through a water bong, I decided that the next day I'd better check the altitude of Mount Timpanogas and other mountains around Utah I had climbed. As soon as I woke up, I'd go to the Internet and find those elevations to reassure myself that I could handle a mere 11,000 feet.

But I didn't wake up the next day, because I couldn't go to sleep.

The feeling that kept me awake is best described as lying in bed and slowly suffocating. It wasn't that I didn't want to get up and go see Dr. Will; it was that I couldn't. I couldn't move. Couldn't breathe. Couldn't will the energy to get help. Couldn't believe it was suddenly this bad.

As I lay there, I tried to diagnosis my illness.

On Friday, I had lugged my gear across the South Pole camp and moved from one shelter to another -- from what's known as a Jamesway into a Hypertat, two canvas-and-wood variations on the Quonset hut. The Jamesway was brown and dark. The Hypertat was blue and dark. It was like living in a Louie-bloo Raspberry Otter Pop instead of a Hostess Ho Ho.

It was obvious to me then that in the running around, my lungs had gotten frostbitten. I reckoned they looked like a freezer-burned piece of high-fat hamburger.

My diagnosis, however, didn't help me move.

At 6 a.m., when I should have been getting up to go to work, I simply could not get out of bed. The nearest phone was in the bathroom. The nearest bathroom was outside -- 50 yards and minus 50 degrees away.

If only I had some food in my room , I thought, enough food to give me the energy to get me from the bedroom to the medical station, which was located inside the large silver geodesic dome that protects the main buildings (including the communications office and galley) from the frigid elements. I looked at my floor, hoping the last guy who lived here had left behind something more than his piss jar. A few crumbs from a midnight snack. Anything.

Peering under the bed for the first time, I spotted a stained tin can -- the chamber pot of the last resident. In the can was a urinal mint calcified to the bottom and sides of the olive can.

I knew that soccer players en route to a match in Chile once ate their best friends to survive death. In the Donner party, family members ate other family members to survive. I asked myself, "Were the nutrients I could gain from another man's urine enough to save my life? Is it better to die gasping for air or choking on frozen urine?" I decided to die trying.

First, though, I'd get dressed so I'd be ready to dash out the door once I was juiced on the urine. I took a gurgled breath and struggled into my pants. I tied my shoes. I didn't need a shirt, just my warm National Science Foundation jacket. I grabbed the sleeve and yanked the jacket off a hook above my head onto my body. It plunked down with a thud. Goose down should not thud.

And then it hit me. A month earlier, Kevin the scuba diver who cuts holes in Antarctic Ocean and dives beneath 10 feet of ice, gave me a Cadbury chocolate bar. "Put the candy bar in your sleeve," he told me, "because in Antarctica, you'll never know when you need emergency energy."

Seven times on the day he handed me the bar, and six times on the next, and 11 times on Monday, and once on Sunday, I felt as though I were having a chocolate emergency. I'd open the Velcro on my sleeve, pull out the candy bar, and put it back in my sleeve. What constituted a real emergency, I decided to wait and see.

And there, thank God, it still was. In one mouthful I ingested all the calories, fat content and sugar one Cadbury bar could muster. I got out of bed and staggered to the Silver Dome of the South Pole.

I have no idea how long it took to get into the medical building. I can remember every step. On the door there was a sign said something like, "Please use the door on the other side of the building." I don't recall exactly what the sign said because I didn't understand the words. I stumbled through the door which said "Don't go through this door" and rasped: "Help, I need some oxygen."

But the only person there was a patient. She told me the doctor was the fourth door on the left. I started to walk away from her and realized I couldn't count to four.

"I can't count the doors," I told the other patient. "Will you tell me when I'm at the right door."

"Jesus Christ! What the ...!? Jesus Christ! I just went to bed a minute ago! This better be important!" shouted the voice on the other side.

Will Silva opened the door.

Then, peering at my face, more quietly: "What's wrong, Phil?"

"I think my lungs are frostbitten."

"There's no such thing."

I was still focused on my inability to count. The number four, in one of the quadrants of my brain, seemed so unattainable. "A, B, 3, R .. . one, three. Shit."

As I tried to count, Will took my vital signs. My resting heart rate was 125 and my blood oxygen level was 50. During the physical I had had in order to come to Antarctica, my doctor said I had one of the lowest resting heart rates of a fat guy she had ever seen. My heart had plugged away through the cholesterol chambers of my body at a calm 42 beats a minute. The average man has an oxygen rating of 100. My oxygen physiology of 50 rated me an F. I was flunking out of breathing. I was seriously ill.

Will gave me a gas mask full of oxygen and soon, I said aloud, "One. Two. Three. Four. Can I go to work now? There are lots of dishes that need to be washed."

Being able to count to four didn't necessarily mean I was healthy. There are a lot of numbers after four. X-rays of my lungs made it obvious to everyone that I had full-blown pulmonary edema. My lungs looked like bags of whole milk. I was told I wasn't going to be allowed to wash dishes at the South Pole. Not today. Not any day soon.

"Phil, look at your lungs," Will said pointing to the X-rays. "You were two to four hours away from possible death."

Within five hours, a C-130 landed at the South Pole and I was medevac'd back to McMurdo with a 314-pound green tank of oxygen.

I spent some time in the hospital and had a few days of bed rest. My lungs are clear again and I'm back behind the dish machine -- at McMurdo.

I now keep two chocolate bars in the pocket of my coat.