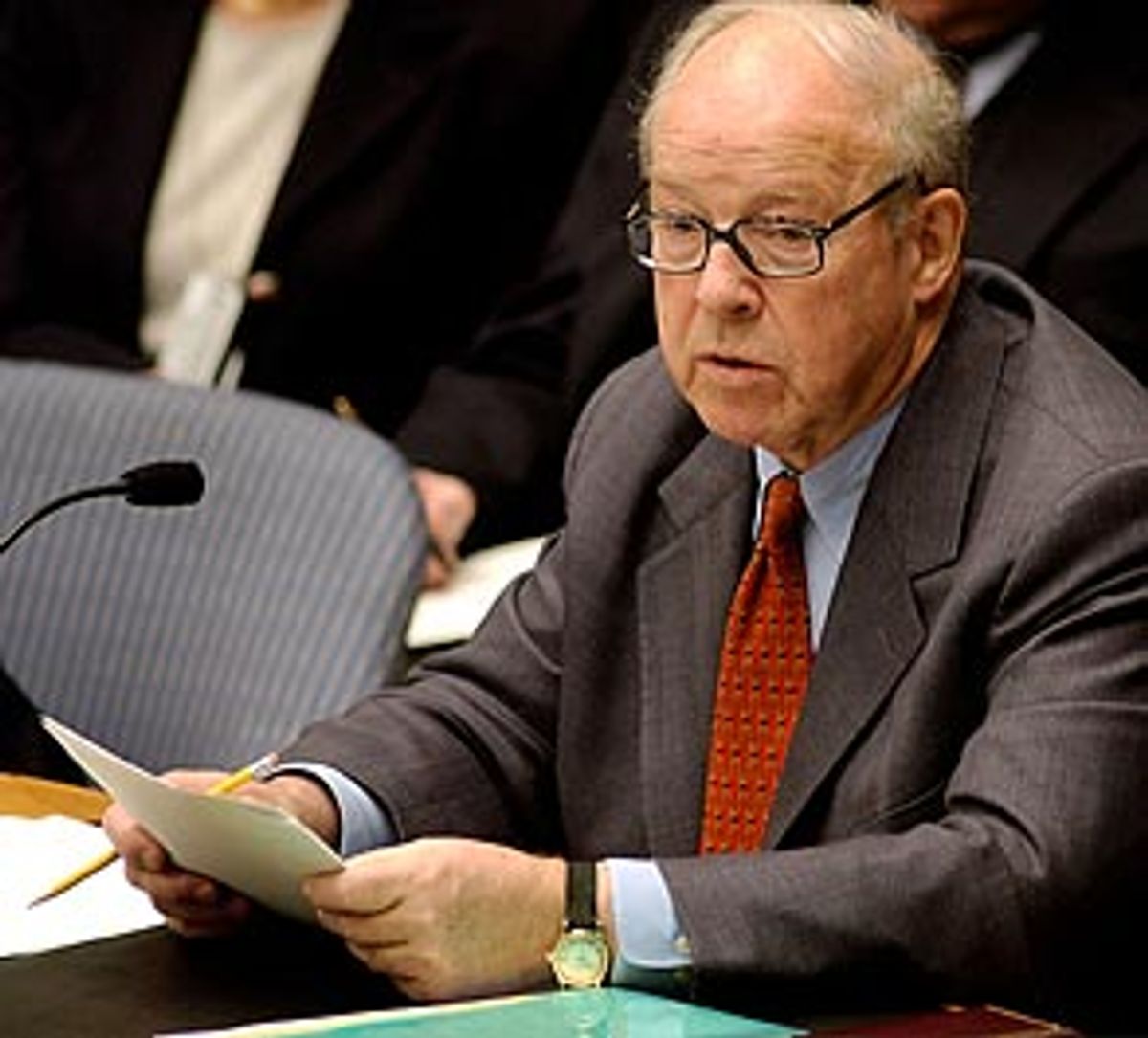 Chief United Nations weapons inspector Hans Blix delivered a tougher-than-expected critique of Iraqi disarmament efforts Monday, and though he stopped well short of condemning the regime of Saddam Hussein, it seemed clear that the Bush administration would use the report to bolster its argument for an invasion.

Under attack from France, Germany, Russia and China for racing into war before the inspection process was complete, the White House is certain to give Blix's comments a prominent place in Tuesday night's historic State of the Union address. The White House will carry its argument back to the U.N. later this week.

Blix would have made the White House happier if he'd uttered the phrase "material breach" in describing Iraq's lack of cooperation, or if his inspections colleague Mohamed ElBaradei hadn't joined leading members of the U.N. Security Council in asking Bush to forestall war so that inspectors could continue their work.

Still, the arms inspection team seemed to concur with repeated complaints from the White House in recent weeks that Saddam was acting in bad faith rather than moving to willingly disarm, as required by a United Nations resolution. "Iraq appears not to have come to a genuine acceptance -- not even today -- of the disarmament which was demanded of it, and which it needs to carry out to win the confidence of the world," Blix said in one especially strong rebuke.

Once played up as an important milestone on the road to war, Blix's report nonetheless seemed somewhat anticlimactic, coming at a time when Bush appears increasingly committed to launching a preemptive invasion of Iraq, regardless of what the inspectors find.

"The train has already started moving," says P.W. Singer, a foreign policy specialist at the Brookings Institute, noting that approximately 150,000 American troops have been sent to the region. "You don't deploy that many troops without an intent to use them. It's very hard to imagine any scenario where we'd be satisfied enough to pull them back."

The White House has seemed to follow a carefully crafted script in recent days, with escalating warnings and rhetorical attacks that could pressure Saddam into exile or persuade dissident forces to mount a coup. Then again, the gambit may be more straightforward: With administration officials uniformly warning that time is running out and insisting that Great Britain, Australia and other countries would join the U.S., they may simply be preparing the world for war.

Speaking through an unidentified source, the administration signaled late last week that it might be willing to give the inspectors more time. But that may be a few token weeks -- a cosmetic gesture that would give the U.S. and its allies time to get their troops and equipment into place. That's unlikely to mend the rift between Washington and its traditional European allies, such as France and Germany, who want inspectors to be given additional months, if not seasons, to complete their work.

"There's still fundamental difference about what constitutes a material breach," says U.N. expert Kenneth Rodman, professor of government at Colby College in Maine, referring to the type of obvious Iraqi violation that could trigger a war. For the U.S., the onus is on Saddam; for most Europeans it's on the inspectors.

In Monday's report, Blix detailed the questions that still remain about Iraqi stockpiles of deadly materials, including the nerve gas VX, artillery shells filled with mustard gas, and anthrax, something Iraq claims to have destroyed in the past.

Blix is scheduled to return to the U.N. in mid-February to deliver another update, but by then it will probably be even more obvious that war is imminent, with the U.S. moving toward an invasion in spite of resistance from France, Germany and Russia, among others.

In a series of recent interviews, experts in global diplomacy worried that such an approach by the Bush administration could do damage to the U.N. and to U.S. global credibility, with effects that may felt long after the battles in Iraq have ended.

Waging a war without U.N. authorization "would do real damage to the United Nations," says Mitchell Reiss, dean of international relations at the College of William and Mary in Williamsburg, Va.

Following the passage of the unanimous Security Council resolution last November, some U.N. observers hoped the international caucus could replicate its achievement of the Gulf War, when it corralled an expansive coalition and validated then-President George H.W. Bush's plan to remove Saddam's troops from Kuwait by force. Back then, Iraq's violation -- invading the sovereign nation of Kuwait -- was so obvious that the U.S. was able to rally international support for its position.

This time, however, arguing that Saddam must be hit preemptively has been more difficult. And in retrospect, the White House's key U.N. victory last autumn was not the clear-cut winner it was made out to be.

For the United States, and for Bush, there would be many drawbacks to invading without U.N. support. Some costs could be political: By a 2-1 margin Americans don't want the U.S. to go to war alone and without backing from the world body, according to a recent Newsweek poll. Already, the emerging field of Democratic challengers to Bush are making a point of challenging his rush to war.

If the White House does abandon the U.N., "it will damage U.S. credibility for years," says Joseph Cirincione, a senior associate at the Carnegie Endowment for International Peace. "It will look like a façade, that our interest in the U.N. and weapons inspections was fake."

That loss of credibility would be felt especially strongly in the Middle East, where the U.S. badly needs allies, says Singer. He notes that, tactically, the lack of U.N. cooperation would make it much more difficult for the U.S. to enlist the aid of key regional allies, such as Turkey and Saudi Arabia, whose governments are still reluctant to embrace a U.S. war effort that remains unpopular with their people.

The U.S. would also find it easier, and less expensive, to reconstruct Iraq following the war if the invasion were conducted under the auspices of the U.N. A recently completed study for the Association of the United States Army estimated that the cost of rebuilding Iraq would run $16 billion the first year alone and that 75,000 troops would have to remain on the ground following the war.

"If we go it alone, there might be a feeling among the international community of, 'It's your mess, you clean it up,'" says Reiss.

Others, though, argue it will be the U.N. that suffers in the long run for not being able to work with the United States. "After the war, how will Americans think about the U.N. if it turns out the United States cannot rely on the U.N. to help protect itself?" asks Tom Donnelly, a resident fellow at the conservative American Enterprise Institute, a Washington think tank.

The current impasse between the U.S. and its European counterparts can be traced back to the original U.N. Resolution 1441, which passed to much acclaim in November. The declaration insisted Iraq open its weapons programs and cooperate with the inspectors for the first time in four years, or it would face "serious consequences" -- code words for war.

At the time, the press played up the 15-0 vote among the Security Council as a diplomatic coup for the U.S., which somehow was convinced the French and Russians saw things from the American point of view.

But today's diplomatic morass was foreshadowed just hours after the resolution passed, when French and American officials came to surprisingly different conclusions about what it actually meant. Throughout the negotiations, the French had been insistent that the proclamation not contain a "hidden trigger" that allowed the U.S. to unilaterally declare war in the name of the United Nations the moment that Washington, and not the Security Council, deemed Saddam in "material breach" of the inspection regime.

The French, as well as the Russian and the Chinese, wanted to make sure the U.N. still played a key role after a resolution was passed. Last fall, French diplomats suggested a two-step approach: The U.N. would vote to send inspectors back, and then would have to vote again to authorize war.

That provided a framework for the final agreement, though France's two-step approach was folded into an extended one-step version. In other words, according to 1441, the Security Council would immediately reconvene to decide on war if Blix found Iraq to be in "material breach" of the disarmament resolution. And even if he did not uncover any dramatic findings, Blix was ordered to update the U.N. in person 60 days after the inspectors went to Iraq. That way, argued European diplomats, the United States was still bound to work through the U.N.

Within hours of 1441's passage, the White House made it clear that the U.S. in no way felt obliged to win passage of a second Security Council resolution in order to go to war and would go it alone, if need be.

If Iraq defies the resolution, warned Secretary of State Colin Powell on Nov. 10, "the U.N. will come together and act if military force is required. But if the U.N. is unwilling or unable to act, then the United States is prepared to act. And the president has made this clear."

"It was a classic diplomatic fudge," says Rodman at Colby College. "Two parties don't agree, so they agree to language that can be interpreted differently by different parties and hope the two sides will eventually agree." Singer concurs: "The reason everybody in the U.N. thought 1441 was such a great agreement was it avoided war," says Singer. "But the reason the U.S. thought it was great was it provided a case for war."

The fundamental difference wouldn't have mattered if Iraq had blatantly interfered with the inspection process, as it often did in the 1990s, or if inspectors had uncovered banned weapons programs. at that point the Security Council, with France and Russia's blessing, would have likely agreed to a second war resolution.

But Iraq's passive cooperation and the inspection team's inability to uncover a "smoking gun" has only highlighted the initial friction. "Fig leafs cover up important things," says Reiss, referring to the 1441 compromise.

Unlike France, Germany does not have veto power in the Security Council, so is not as important in the game of diplomacy now being played. And France, while arguing against waging an invasion right now, has been careful not to rule out supporting a second U.N. resolution for war. Some observers suggest Paris is simply playing hardball as a way to increase the price Washington will pay to get the French back on the war bandwagon.

That's why the U.S. has not given up on the U.N., with talk that the White House will try to pressure its critics by introducing a second resolution to the Security Council, in effect daring another country to veto authorization for war at a time when Saddam clearly has failed to disclose all of his weapons of mass destruction or to account for weapons that he once had.

Nonetheless, the White House would probably prefer to play brinksmanship with Saddam, not the U.N.