Salon columnist Carina Chocano talks about her new book, "Do You Love Me, or Am I Just Paranoid?" 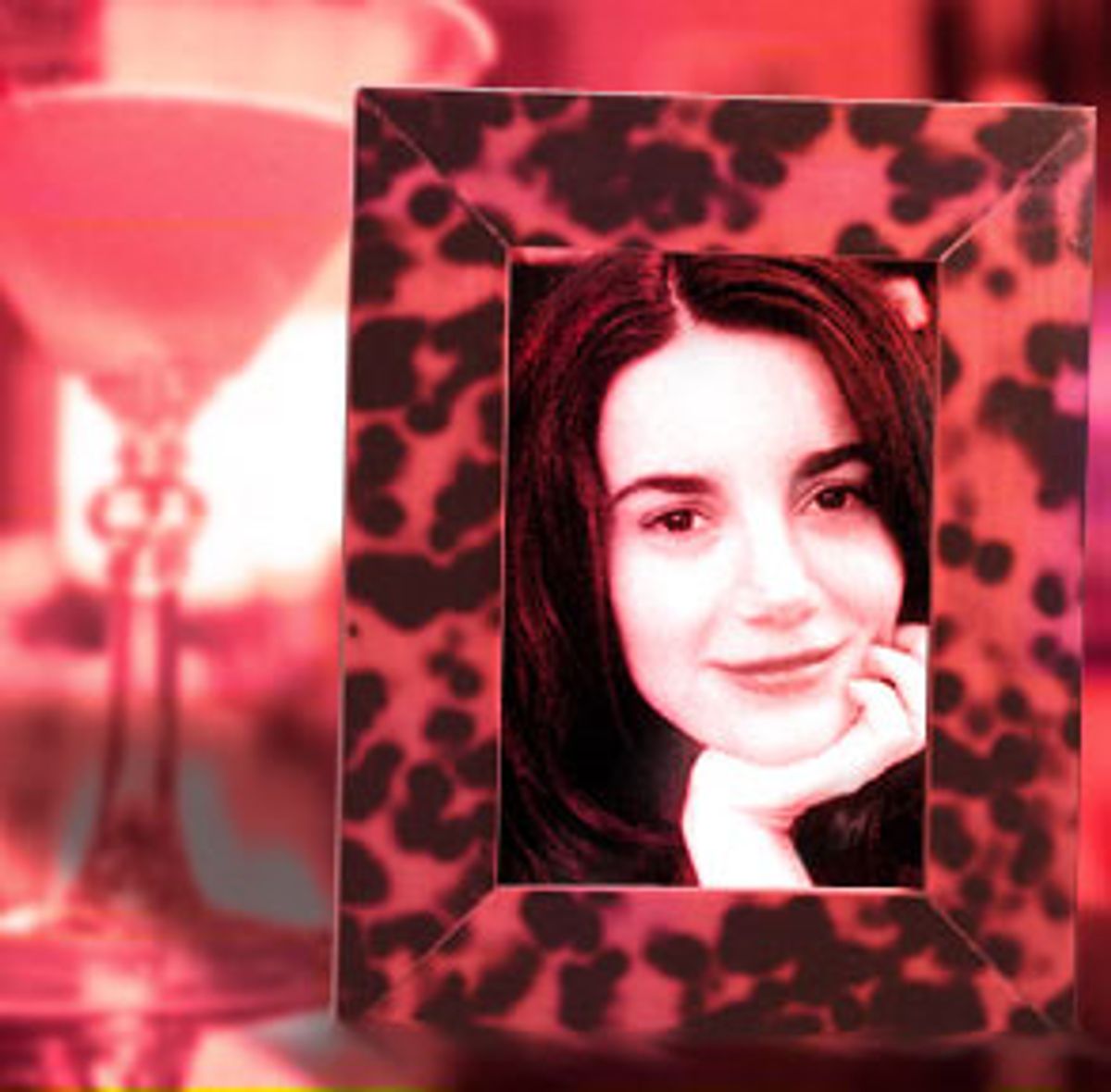 When I first met Carina Chocano -- whose first book, "Do You Love Me, or Am I Just Paranoid?: The Serial Monogamist's Guide to Love," was published this month -- we were in our early 20s, both of us recovering from major breakups with live-in boyfriends. We shared a flat in the Upper Haight in San Francisco and had lots of empowering late-night talks about staying true to ourselves and staying single for as long as possible. Before too long, though, we were both involved with new boyfriends. Then, a few years later, we went through more breakups, followed by a new round of boyfriends.

This pattern has continued over the past 10 years, with the two of us cycling through boyfriends about as often as the average person visits the dentist. Today, Carina lives a few blocks from me in Los Angeles, and we have lots of empowering late-night talks about staying true to ourselves and staying single for as long as possible. Thus, when Salon asked if I thought my interviewing Carina about her new book on serial monogamy would be inappropriate, I said that I couldn't think of anything more appropriate.

So Carina and I met at our favorite overpriced Los Feliz diner and tried very hard to discuss her new book with the dignified solemnity of professionals, rather than be swept away on our usual manic torrent of self-involved digressions. Instead of daintily picking away at salads Vanity Fair-style, we opted for a moodier combination of triple lattes and pancakes filled with chocolate chips and little marshmallows.

Is serial monogamy a trend, a cultural phenomenon, a paradigm, a rite of passage, or a triple-tough stain of coffee, tobacco and cherry pie on the proverbial dentures of our society?

All of the above. The only difference is that you cannot eradicate serial monogamy with baking soda and hydrogen peroxide. As a stain, it's very stubborn. As a trend, it's very trendy. As a rite of passage, it's the closest thing we have to one of those funny rituals in which young singles cover their bodies in paint and try to impress each other by dancing around, spears aloft, or get married off to a suitable stranger in exchange for livestock.

In our culture, we don't have clear rites of passage like those. Or rather we do, but you have to get cast in a reality show to be able to participate. So I think it's encouraging that we have developed our own rituals, i.e., the practice of bouncing from one relationship to the next. And there's no reason to look at it as some sort of dysfunctional repetition compulsion, either. Looked at from another angle (if you squint and make your eyes go sort of unfocused and blurry), it's not unlike reincarnation. You must strive to improve yourself in each of your love lives, or wind up being reincarnated as a bitter, angry parasite.

Why do you think so many people these days are serial monogamists?

In this day and age, we have a tendency to commit early and commit often. I think this has something to do with this thing we all learned in therapy about relationships being work. If relationships really are work, then the pay is really horrible, and maybe it's time we all started thinking about the advantages of going on unemployment.

The problem with the love-as-work model is that it's sometimes hard to determine what the exact job description is. Also, the start date can be confusing. A lot of people start "working" on their relationships as early as the first week. Anybody who has ever had a job knows that this is not a good sign. The first week should consist entirely of obtaining fun supplies from the supply closet, sitting around pretending to look busy, and calling all your friends on company time to rub their noses in it.

Although your book has "Guide" in the title, would you say it's more of an anti-guide or a reaction to the typical man-hunting guides on the market?

The original idea was to parody love manuals, because they are evil. They manufacture fear, then present themselves as the antidote to fear. My book wound up being a guide to having bad relationships. We all have them, so the book should make you feel like you're doing something right. Relationships are hard, but they're also really funny, when you think about them years later, once the rage has subsided.

Any ideas of how a person can break the pattern of serial monogamy?

There are only two ways known to man. The first is to cling tenaciously to a mental image of your ideal mate and reject all opportunities for love until the spitting image of your mental image magically appears. This method is also known as chastity. The second is to avoid formulating any mental image at all when entering into a relationship, and then form the image retroactively. It depends on whether if by "break the pattern" you mean "Keep whatever relationship you have together at all costs," or you mean "Never go out with anyone ever again."

I think I alternate between those two approaches, but I still end up a card-carrying serial monogamist. So maybe trying to break the pattern is the best way to ensure that the pattern is never broken.

Maybe we should start our own Serial Monogamist Sect, and at meetings we can sing, "May the Pattern Be Unbroken." Sort of like "Little House on the Prairie." But different.

What impact do you think the rise of serial monogamy has had on American culture?

Well, I think it has been a real boon to the relocation industry as a whole. People are renting a lot of those U-Haul trucks that fit a one-bedroom apartment's worth of furniture and buying lots of boxes, packing tape, Styrofoam peanuts, bubble wrap, even those little cardboard glass separators.

Also, I would think the couch business has been positively impacted, as our business school friends like to say, because everyone knows what happens to couches when unmarried couples move in together: They bring their two couches together into one apartment, fight about which couch is better, then finally agree to throw them both out and buy a new one. Then, when they break up, there's a major debate over who will get the new couch, and the loser has to go out and buy another new couch. The couch has become the ultimate expendable product. It's the new cigarette.

So, let's see, small truck rentals are up at U-Haul, couch sales are up, and used couches are more available than ever.

What are your qualifications for writing this book? Are you a relationship scientist?

Yes, I have a degree in relationship science.

Is that one of those online degrees where you pay to e-mail back and forth with some teenage customer service reps, and then they send you a piece of paper in the mail with your name and a gold stamp on it?

Yes, in fact, it is. But mine is honorary.

Even though I'm sure you've had only the most mature interactions with the opposite sex, what was the worst way that someone ever let you know that it was over?

One time, I had been seeing someone for about three months, and one day he seemed to be in a bad mood. When I asked what was wrong, he said: "The honeymoon's over. No more Mr. Sunshine." Naturally, we stayed together for another year.

How long was the longest relationship you've ever been in?

Well, let's just say longer than it takes an elephant fetus to gestate, and shorter than the Hundred Years' War.

How many years too long was that?

Are you optimistic about the existence of True Love?

Can True Love be purchased?

I think it really depends on where you shop. Me, I'm the kind of person who balks at spending $200 on a really nice pair of pants, then blows the same amount on four not-so-nice ones that wind up sagging in the groin area within a few months and live out the rest of their days balled up in the corner of my closet, listening to me complain about having nothing to wear.

About breakups, you write, "You may spend months of valuable time and effort turning your friends against your boyfriend, only to discover that you can't live without him at the last minute." Is there a way around this problem?

One of the most popular, time-tested methods is, of course, to promptly turn against your friends. Needless to say, this is in extremely bad taste, but a cornered rat has no time to think about protocol. Go for the throat whenever possible.

Hear, hear! In your book, you assert that cohabitation "is a great way to ensure that nuptials will almost certainly never take place." Why do you think living together makes marriage less likely?

I'm not exactly sure, but I think it has something to do with forgetting that you are not already married, and mentally jumping ahead to the next logical step in the sequence: divorce.

Your book is enjoyable partially because you take every point to an extreme, so that the whole thing reads like a farce, yet even the biggest exaggerations feel relevant and relatable. Do you feel your book is a direct reflection of your experiences with relationships, or is it more of a farcical romp through the worst that relationships have to offer?

Um ... The second part. Actually, I hope that it will make people who are having a hard time in their relationships feel better. It comes from a place of love.

How can people determine whether or not their relationships are going nowhere?

Well, I think all relationships go somewhere. It just depends on where you want to go. I also don't think that marriage is necessarily "the answer" to all relationships. I have had married friends tell me that the big advantage to being married is that not every fight winds up bringing up the question of whether or not you should stay together, however. I would imagine that this cuts down fighting time considerably.

How about a beauty pageant isolation-booth-style question: What advice would you give to a future generation of serial monogamists?

Follow your heart, even though it has a tendency to jump off bridges, and don't forget to floss.