Dark late-night of the soul 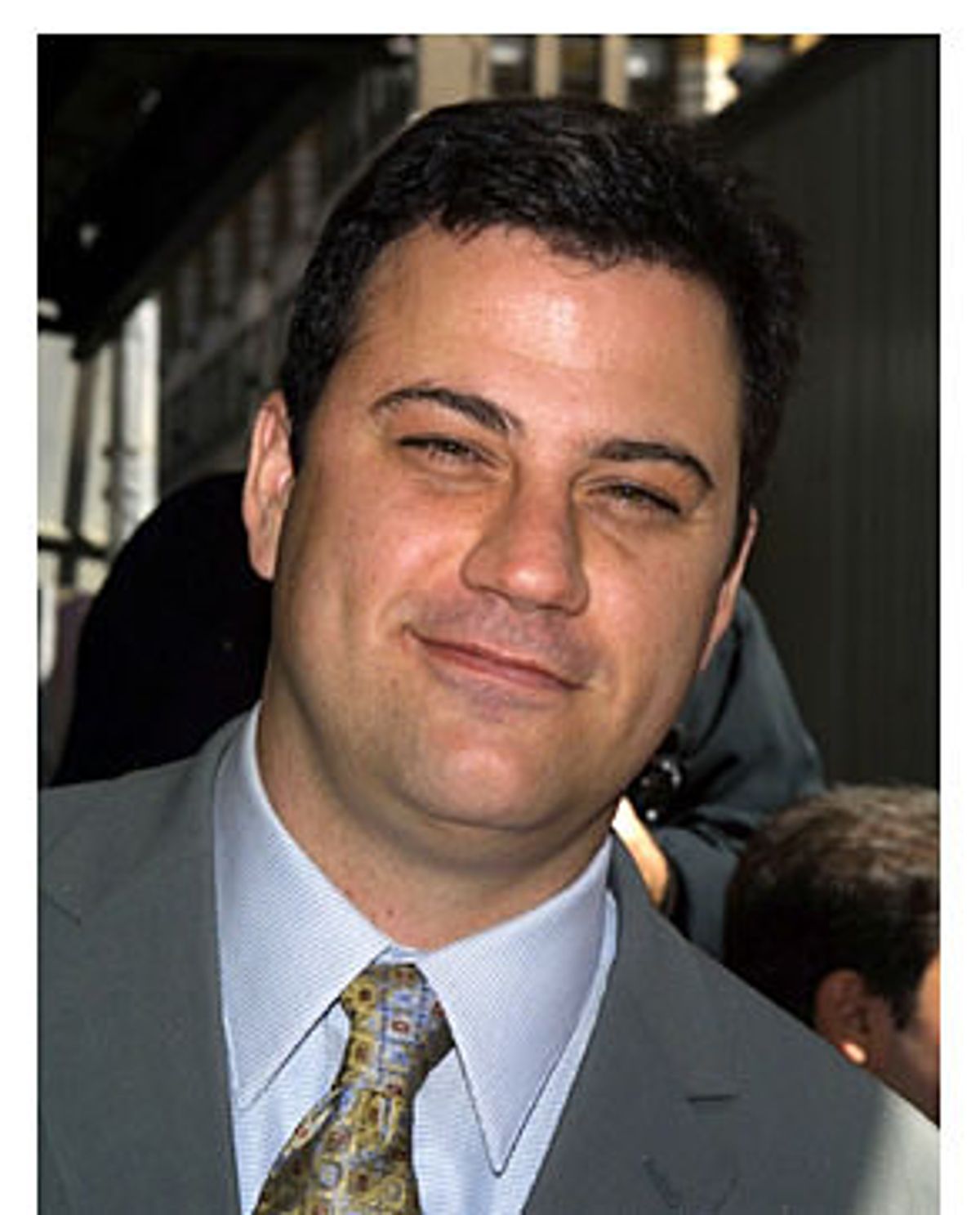 When David Letterman mocks his employers' cluelessness, the joke is on them. When Jimmy Kimmel does it, you want to send in a rescue crew. "Jimmy Kimmel Live" plays like a real, live "I'm a Celebrity, Get Me Out of Here." The difference is that you really do want to get the poor guy out of there, because the environment seems so hostile and he looks so very alone.

Only three days after embarking on his new adventure, Kimmel's normally cute, self-effacing regular-guy persona has started to veer into darker territory. He seems defeated. His opening-night joke ("Welcome to 'Enjoy It While It Lasts,' my new talk show"), as well as Ted Koppel's introduction ("Good evening, I'm Ted Koppel. There will be no special post-Super Bowl edition of 'Nightline' tonight, so that ABC can bring you the following piece of garbage"), hangs over the show like a dark, portentous prophecy.

Like, where are the guests? After three days on the air -- three long days spent in the "co-hosting" company of Snoop Dogg, a man whose conversational skills and extemporaneous wit would be put to shame by a volleyball with a smiley-face painted on it -- Jimmy has spent an inordinate amount of time visiting with security guards, deeply disturbed "paranormal experts," relatives and Tammy Faye Bakker. You can't blame him for not appearing to be fascinated or even quite engaged -- but then again, it is his job, isn't it?

One of the few innovations of "Jimmy Kimmel Live" -- the fact that audience members and guests were allowed to drink alcohol on the set, a presumed attempt to add "fun" to the proceedings, or perhaps a calculated attempt to impair audience judgment -- was nixed after one audience member vomited backstage on the night of the debut. Three days later, it remained a topic of conversation.

Another innovation seems to be that "Jimmy Kimmel Live" is a talk show in which nobody has anything much to say. There is no monologue, hardly a mention of politics or current events and nobody even seems to be promoting anything. Booking highlights have so far included George Clooney, the Rock and Al Michaels, the voice of "Monday Night Football."

Aside from Tammy Faye and the crazy ghostbuster lady, girls have stayed away in droves. Maybe they fear they will be inadvertently stepping onto the set of "The Man Show II." (Though how anyone could confuse the bloated, rococo set of "Jimmy Kimmel Live" with the "Romper Room"-on-Viagra vibe of "The Man Show" is beyond me.) Perhaps they are afraid of being asked to don bikinis and jump on trampolines. But even this seems strange, as Kimmel's mensch persona -- he is cuddly, friendly, slightly self-effacing -- was a benign antidote to Adam Carolla's motor-mouthed obnoxiousness on "The Man Show," and generally helped keep it from descending into total offensiveness.

Maybe celebrity publicists, not known for their willingness to take chances, want to see how things go for Kimmel before allowing their charges to spend a few unsupervised minutes in his presence. (Then again, we are not talking about an obscure little show on basic cable.) Whatever the reason, the utter absence of estrogen inspired Kimmel to present Tammy Faye with a sash and a bouquet on Tuesday night for agreeing to come on.

After canceling Bill Maher's "Politically Incorrect" last year and briefly flirting with the idea of building a show around Jon Stewart of "The Daily Show," ABC has decided that the best way to gain late-night market share in the 18-34 demographic is to keep things dumb, slow and harmless. Whether it will work is anybody's guess. But as long as we're guessing, I will venture to say that A) it's time to retire the whole 18-34 idea and start thinking in terms of "good" and "not so good," and B) if networks and advertisers are going to cling to the idea that audiences born within a particular 16-year period universally favor adolescent mediocrity to the exclusion of anything and everything else, then they should have at least let Kimmel bring the "Juggies" with him and kept the vodka handy.

As things stand now, Kimmel is a not-so-great conversationalist struggling to squeeze fun from a stone (or a stoned Snoop; show No. 3 included clips of show No. 2, in which the rapper's eyes had narrowed to the width of coin slots). A second-night gimmick intended to mock NBC's patently absurd "Blizzard Monday," in which its entire prime-time lineup was subjected to heavy precipitation, fell flat. Fake snow falling on a boring show somehow just highlights the "boring show" part.

Tuesday night's show ended on a particularly sad note, when Kimmel was reduced to announcing that the next night's lineup would consist of some musical guests and -- whoever else happened to turn up. Somebody please help him.