What went wrong with Terry Gilliam's dream of making a big-budget "Don Quixote" movie? As this documentary makes painfully clear, everything. 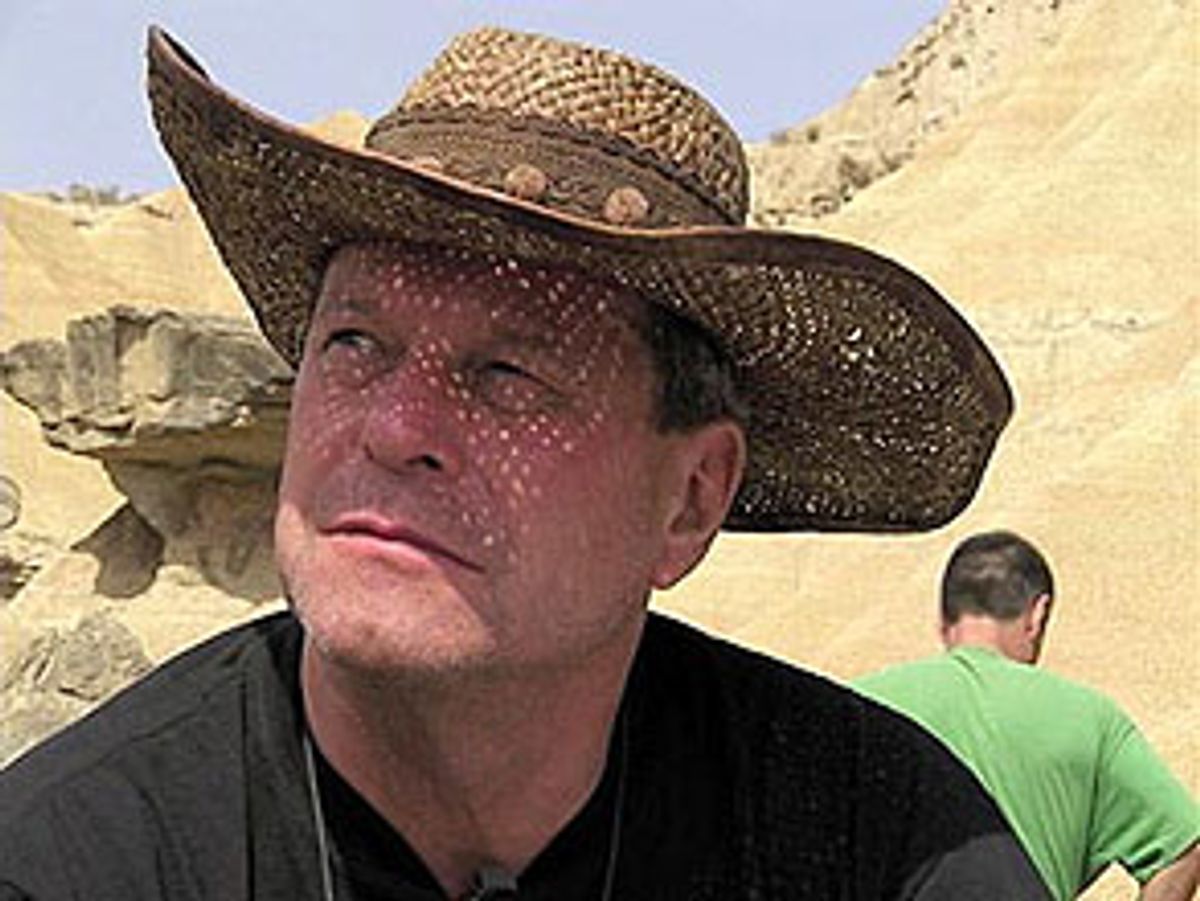 "Lost in La Mancha" tells the story of Terry Gilliam's aborted attempt to film "Don Quixote," and it's almost too painful to watch. As documentaries go, "Lost in La Mancha" does exactly what it sets out to do, describing the picture Gilliam was hoping to make and showing just how wrong it went. But it's also an elegy for every doomed picture that was never made.

There's something mournfully claustrophobic about "Lost in La Mancha," which directors Keith Fulton and Louis Pepe put together from footage shot during the "making" of Gilliam's film (at Gilliam's invitation) and from interviews that were done both during the filming and after the fact. Watching it is like being trapped in one of those nightmares where you need to get somewhere, fast, and you're distracted and delayed at every turn. Only in this case, the nightmare is happening to someone else, and it's costing an awful lot of money.

Gilliam had been hoping to make a movie version of "Don Quixote" -- it was to be called "The Man Who Killed Don Quixote" -- for more than 10 years, and in September 2000, the cameras finally started rolling. He'd already had a number of false starts on the picture, but that was nothing new for him. And if anyone could put "Don Quixote" on film, you'd think it would be Gilliam, who, often against the odds, managed to pull off ambitious and fanciful (though not frivolous) projects like "Brazil," "The Fisher King" and "12 Monkeys."

Then again, Orson Welles had dreamed of filming "Don Quixote" for years, and although he managed to complete some footage, the project died. Seeing what happened to Gilliam in "Lost in La Mancha," you're tempted to conclude that any "Don Quixote" film is simply doomed. But "Lost in La Mancha" is wrenching because it makes you believe that, with better luck and not much else, Gilliam could have pulled it off.

The movie had a $32 million budget raised exclusively from European sources -- that's a minuscule amount by Hollywood standards, but extremely high for a European-financed picture. It was half of what Gilliam knew he needed, but he went ahead anyway. And at the beginning of "Lost in La Mancha," things look at least vaguely promising. Gilliam had built a fine cast, which included the French actor Jean Rochefort (who would play Quixote) and Johnny Depp.

Gilliam knew exactly what he wanted to do (he'd been working on storyboards for years, some of which are shown in the film), and he already had a clear idea of how the picture should look. He had engaged the costumers, begun building the requisite windmills, and gotten craftspeople started on building the large army of puppet soldiers he needed for the picture. ("Elaborate" may not be a strong enough word to describe his vision.)

The director had already worked out some wonderful footage of a trio of "giants" who would descend upon Quixote. There's test footage of them racing toward the camera in slow-motion -- they're big guys made to look even bigger by clever camerawork -- and, with their giant bellies and wobbly pecs, not to mention their cartoonishly evil grins, grunts and groaning, they give you a sense of the grand good humor that probably would have permeated Gilliam's "Quixote."

But then the problems begin to pile up -- slowly at first, and then escalating at an alarming and almost farcical rate. (The camera often catches Gilliam chuckling to himself, or to the heavens; at times the only thing for him to do is have a laugh over his own bad luck.) If Gilliam had tried to dream up a movie about a disastrous film shoot, he couldn't have topped this one: The actors took forever to get to Madrid, where the movie was to be shot, and were arriving piecemeal. The filming starts out well enough, but toward the end of the first week of location shooting, a huge rainstorm descends (Pepe and Fulton's cameras capture the terrifying blackness of the sky): It destroys equipment but also changes the color and contours of the landscape. Gilliam and his team are forced to postpone the shooting at that location, as the shots wouldn't match. They scramble to figure out how to best use their time, and each tick of the clock means more money lost.

But that's not all. Rochefort, a master horseman, has trouble mounting the bony steed he's supposed to ride. He's in such great pain that he has to return to Paris to see his doctor (as it turns out, he has a herniated disc, which sidelines him indefinitely). Then the insurance adjusters arrive, and while the storm-damaged equipment is covered, there's some question as to how much of the money lost on the movie's shooting schedule will be covered by the policy. There's a clause stating that if a movie falls behind schedule because of an "act of God" -- and a storm, as well as a herniated disc, would probably qualify -- the lost time isn't covered.

You're not alone if you're asking what on earth besides an act of God ever causes a filmmaker to lose shooting days? (So laziness and inefficiency are covered, but if a storm washes away your landscape, you're screwed?) But none of that matters. Gilliam and his team are forced to shut down the production after only six days of shooting. The project is buried in debt and, once the plug is pulled, Gilliam doesn't even own the movie's screenplay.

"Lost in La Mancha" stresses a little too strongly the parallel between Gilliam and Quixote himself. We already know they're both eccentric dreamers whose visions are too big for reality -- it's a comparison that's so obvious it doesn't even have to be stated. Gilliam also comes off as an extremely likable but highly disorganized artiste. And while you want someone with an imagination of Gilliam's caliber not to have to worry too much about real-world stuff like scheduling and budgets (he's got a capable assistant director to handle all that, thank God), there are times when you'd like to shake him. He seems to be almost willfully ducking some of the harsher realities of filmmaking, realities he has already faced and seemingly conquered in his other projects -- why not this one?

But you can't be too hard on the guy. "Lost in La Mancha" is sad for so many reasons. It's not likely we'll ever get to see Rochefort as Quixote, and, with his noble cragginess, he's perfect for the role. We'll never get to see the crazy giants, or the puppet army, as Gilliam envisioned them. "Lost in La Mancha" tells us that Gilliam is currently trying to buy his screenplay back so he can have another go at "Don Quixote." But Fulton and Pepe's camera catches him, late in the game, wearily explaining that he's made this movie so many times in his head over the years that he just doesn't know if he has the energy to make it for real.

That's the saddest moment of all in "Lost in La Mancha": Gilliam may be frustratingly unrealistic at times -- but then, isn't that exactly what the movies need these days? If Gilliam gives up on his dreams, what's to become of ours?