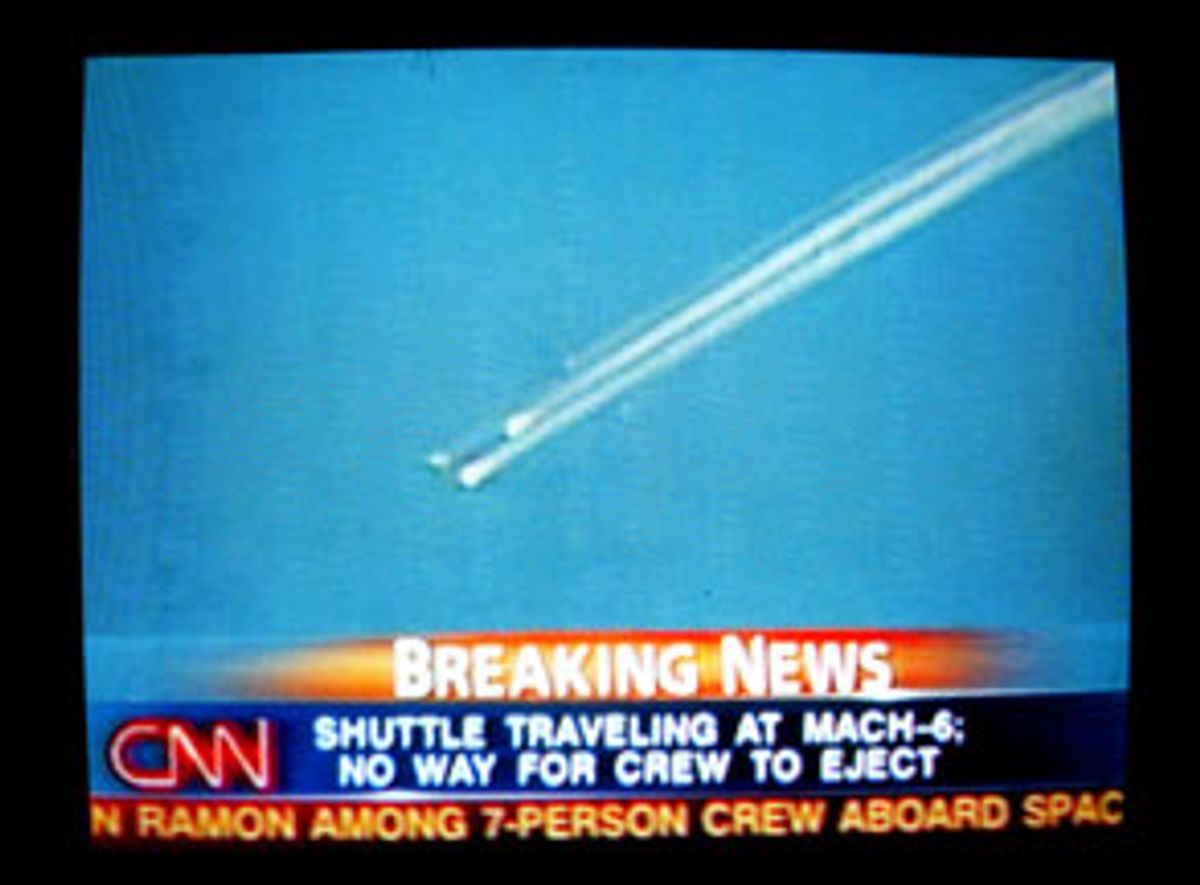 In the sequel to Stanley Kubrick's "2001," there's a scene where a TV is playing a commercial. Look closely and you'll notice it's an ad from Pan Am, hawking service not to Sao Paolo or New Delhi, but into space aboard a ship that looks uncannily -- indeed precisely, if my memory is in order -- like NASA's Space Shuttle. Clever, but Pan Am, transportation utopians that they were, really did pre-sell a batch of tickets for proposed routes into orbit (think of the frequent flyer miles). And NASA, another group of visionaries by nature, was eager to boast that its shuttle could and would make it possible: the Final Frontier as commercial promise, something greater than a tool of Cold War competition and a backdrop for extraterrestrial golf.

As happens often enough, things evolved far more slowly and more expensively than the dreamers and scientists hoped it might. But NASA's shuttle, inevitably restricted to missions of quasi-governmental nature, was built and flew successfully. By 2003 the takeoffs and landings have become routine enough that Saturday's explosion over Texas left millions of people thinking, "I didn't even know it was up there." In that sense, one could deem the shuttle program a raving success.

But what is this thing -- spaceship or airplane? When is a pilot also an astronaut? Why is there an Air and Space Museum rather than one of each?

Just as the tag "shuttle" was intentionally chosen to demolish the idea of spacecraft as exotic and otherworldly, an expression like "aerospace" or "space flight" is itself a kind of technological oxymoron, and deepens the ambiguity between traditional airplanes and those beyond. And the shuttle was designed precisely as both. It goes straight up, just like the big old Saturns that carried the lunar landers, bolted to a tripod of liquid and solid fuel rockets. But then it comes home again, having dispensed with the rigors of reentry, gently as a falling leaf -- as a glider, for Chrissakes, with landing gear that drops into place no differently than that of a 737 turning final approach into Pittsburgh.

Until 2000, the 14,500-foot length of runway 31L at Kennedy Airport was designated an alternate landing strip. Imagine the sight of the black and white craft barreling in over Jamaica Bay, skimming the tops of taxiing Boeings and Airbuses and Concordes before braking to a halt. "Ladies and gentlemen, welcome to New York, where the local time is..."

And we could, I suppose, see the shuttle driver as a kind of transcendent Superpilot, a beyond-Yeager embodying some Ultimate Stuff. Not all crewmembers are qualified to steer the vehicle toward its usual landing spots in Florida or California, and those who carry such NASA credentials are designated, well, pilots. Sophisticated autopilots, maybe, are taking care of the grunt work, but the pilots are aboard every mission, and they sit before a console and joystick not the least bit unlike those found aboard a widebody jet. Armstrong and Aldrin, parachuting into the sea in their triangular capsule, wouldn't have a clue. (And one of the funniest, if undocumented, anecdotes to make the rounds of airline pilots is the one about the Shuttle pilot who interviewed for a position at a major airline -- and was turned down.)

Two shuttles have been destroyed now out of 113 launches. Terrible odds for those of us going to Altanta or Chicago, but surely impressive for anyone headed to orbit. Neither's fate was the work of things we normally associate with air disasters -- there'll be no talk of windshear, hijacking or boxcutters.

But there's an undeniable commonality between these unearthly machines and the earthly jets that preceded them, and a kinship between their operators. It's something at once confoundingly hard to express, while on the other hand patently obvious. I knew nothing about the properties or maintenance of Columbia's more than 20,000 heat-resistant tiles, the failure of which may have caused today's accident. But just the same, I might have found myself grading its televised landings over the years, or noting the nearly identical likeness of its cockpit windows to those of an airliner.

I remember the day in August, 1977, when I was in sixth grade and the prototype Enterprise made the space shuttle's public debut. Fittingly perhaps, the maiden voyage was strictly within the confines of gravity and atmosphere (no shuttle would reach space until 1981). Enterprise was but an airplane, on an honest and true flight, released from a perch atop a Boeing 747 at a mere 24,000 feet, from where it would do nothing more elaborate than bank gently and glide to a landing in the Mojave Desert.

Watching that event unfold (it was a big news story at the time, and you pre-CNNers might remember it), I found it difficult to determine what engrossed me more -- the ex-American Airlines jumbo jet that carried the thing, or the piggybacked shuttle itself, which could have been described derisively as "about the size of a DC-9."

There seemed a not so subtle allegory in there -- the iconic 747 with the new-generation shuttle riding above, like a mother bird teaching its precocious chick to fly.

But years later, when Challenger blew up in 1986, I remember watching on television with a sense of perplexed awe. In all the disastrous magnificence of the fireball, I found it odd, or even presumptuous, as a private pilot with a hundred or so hours in my logbook at the time, to relate. But I did. Feelings of kinship or professional empathy were tough to fathom, but they were under there somewhere.

Then in the fall of 1988, Discovery made the first post-Challenger launch after more than two years of downtime. This would be, to assign it the NASA equivalent of a flight number, something called STS-26. Its mission highlights, as outlined by agency literature, would include the following:

What would Saint-Exupery or Lindbergh have to say about that?

On the morning of Sept. 29, 1988 I was driving with a friend in a rented van up the Intercoastal from Ft. Lauderdale toward Boston. Our interest piqued by all the roadside hoopla -- campers and wagons and kids everywhere with American flags -- we detoured over toward Cape Kennedy to watch the takeoff. It was one of those moments of pride and redemption both for NASA and America, and frankly the kind of thing I avoid at all expense.

But while never one for fireworks or patriotic theatrics, I became captivated. The morning seemed to build into a kind of almost unbearable tension. Believe me, there's nothing like the witnessing of a NASA countdown to put you on giddy edge. Then, after more than an hour and a half delay, Discovery burst to life and lurched skyward like a gigantic roman candle. The power of the spectacle -- the plumes of smoke, the nuclear brightness of the blast and rumble of the rockets -- is something I'll never forget.

Was that the pilot in me? Partly, yes. And isn't that the whole idea?

Twenty-five years have elapsed since Enterprise made its leap to freedom. Flight, whatever variants of it we embrace as pilots or people, was never again the same. By exactly the same measure, perhaps, the tragedies of flight are forever different, too. But something wholly intrinsic, aside from the constants of gravity and grief, remains unchanged. And while not every pilot can tell you he's an astronaut, maybe every astronaut was indeed a pilot first.