Beer bongs! Gratuitous panty jokes! And more ass than a boy band gets! This frat romp might be dumb, but you'll wet your Dockers anyway. 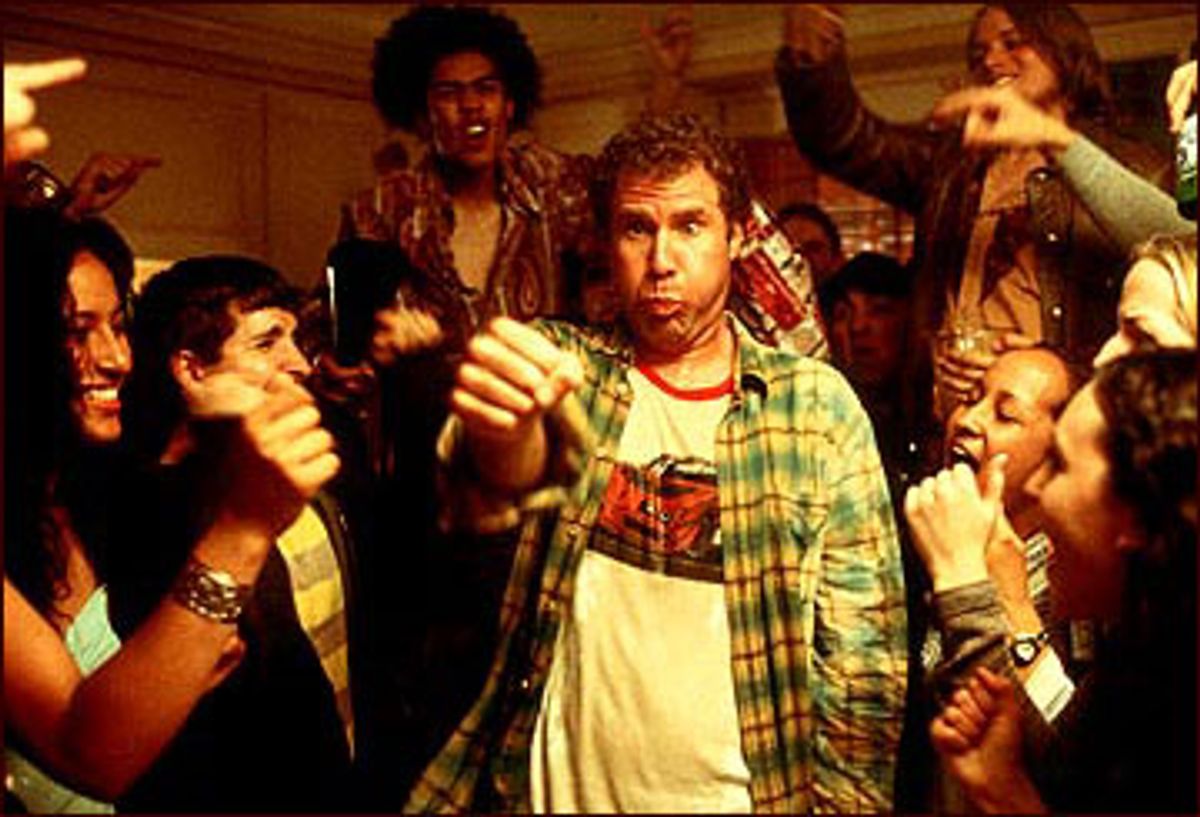 You probably already know where you stand, sight unseen, on the juvenile, testosterone-infused comedy "Old School." This utterly pointless movie is for capital-G guys and perhaps a very few of the women who so valiantly and tolerantly put up with them. (If you've been coughing up pieces of Twizzler laughing at the trailers for this one while your girlfriend fixes you with a baleful glare, you know who you are.) It doesn't really have a plot, and its central premise -- a trio of 30ish guys ditch their real lives to start a fraternity -- never makes any sense whatsoever.

I am here, however, not to condemn "Old School" but rather to play a role not unlike that of the stuffy, tweedy professor in a college comedy who shows up, in the final dance-party scene, to shake his rump. For one thing, this movie isn't really the anti-P.C., bad-boy anarchic romp it pretends to be. Like most other dude comedies (see also "American Pie," "There's Something About Mary," etc., clear back to "National Lampoon's Animal House"), it's finally just as moralistic and traditional as any weepy, romantic chick flick. For another, vastly more important thing, it's blissfully, pants-wettingly funny from beginning to end.

As the three losers staring middle age in the face who decide to relive youth with a vengeance, Luke Wilson, Will Ferrell and Vince Vaughn play off each other with the loosey-goosey, half-improvised grace of old vaudevillians. Director Todd Phillips and co-writer Scot Armstrong (whose previous collaboration was on "Road Trip," a similarly untrammeled work of comic genius) pretty much just hand the trio their beer bongs, tranquilizer darts and cheerleader costumes and get out of the way.

Slightly rumpled but handsome lawyer Mitch Martin (Wilson) actually has no desire to become a wild child. At least not until he comes back early from a business trip to find that his live-in girlfriend (Juliette Lewis, and where the hell has she been?) has become a hog-wild slut with lots of "Internet friends." There's no point, by the way, in trying to defend the portrayals of women in a movie like this. They're all either exasperated wives, unattainable good girls or sex-crazed nymphets. But the point of these caricatures is that the hapless, befuddled male characters are so easily hypnotized, enslaved and defeated by them.

Onward we go to the wedding of Mitch's pal Frank (Ferrell), where Mitch gets appropriately blitzed and blunders into Nicole (Ellen Pompeo), a wholesome blonde and his Girl Who Got Away. At this event we also encounter Mitch and Frank's old friend Beanie (Vaughn), a midlevel stereo-chain tycoon with a cynical streak and a line of patter for every occasion. Standing with the groomsmen at the church altar, while Frank and his bride prepare to exchange vows, Beanie keeps pretending to cough: "Hock-hock-don't-do-it!"

The key to an ensemble flick like this is that the three guys establish their characters early and stick with them. Everything that follows is pretty much riffing, the comedy equivalent of jazzmen trading solos. We understand right away that Mitch is a decent guy who genuinely wants to meet the right girl and settle down, but that he is in danger of screwing it up. Beneath his just-married exterior and all his talk about Home Depot and Bed Bath & Beyond, however, Frank is an uncontrollable satyr, the great god Pan in Dockers. In an early scene, his new bride jokes with him about how they don't want to see his alter ego, "Frank the Tank," ever again. Later that night, of course, some college guys at Mitch's new bachelor pad coax Frank into sucking just one brewski through the beer bong -- and soon thereafter he's trying to convince Snoop Dogg to go streaking. (Yes, really.)

What makes Ferrell so funny, I think, is his intense Belushi-esque overcommitment to every gag. He seems like this mild, nice, middle-class guy -- who just can't help himself from ecstatically attacking strangers' shopping carts in the supermarket or gratuitously cursing at children. When Frank and his wife seek couples' counseling as their marriage begins to crumble, the cardigan-clad therapist encourages him to think of his office as "a nest in a tree of trust and sharing." Frank enthusiastically begins to share his fantasies regarding the undergarments of a young Olive Garden waitress, then stops, genuinely mystified by his wife's horrified expression. "Wait!" he protests. "I thought we were in the trust tree!"

Vince Vaughn's Beanie, on the other hand, is mostly enjoyable because he seems like such a snake. A fast-talking hypocrite who's always working the angles, Beanie is actually the driving force behind the demented scheme to establish a frat house for grownups, even though he's got a wife and family and has no intention of dumping them. He's constantly telling his 5-year-old to cover his ears ("Earmuffs!") before delivering some nugget of scandalous wisdom. "We are going to get a lot of ass here," he says of Mitch's new crib. "I'm talking, like, boy-band ass." Despite the braggadocio, we can never be certain that Beanie's underlying motivation is anything beyond selling stereos and DVD players to college kids.

Oddly, the nearby university doesn't seem thrilled about a new frat whose founders are not students and that offers nothing to the academic community beyond pumpin' parties and intergenerational KY wrestling. There's a great deal of meaningless "Animal House"-style plot as the dean (Jeremy Piven), once a geek tormented by Beanie and friends, attempts to eradicate this blight -- and the trio, along with their motley crew of "pledges," vow to resist.

Mitch, of course, is trying to rekindle something real with Nicole. "You wore a Whitesnake jean jacket, you smoked Marlboro reds -- you were way out of my league," he tells her. But will his frat-house liaison with a jailbait hottie create complications? And what about Nicole's too-smooth boyfriend (a nice cameo by late-night TV host Craig Kilborn), whom Mitch discovers playing tonsil hockey with another gal? "Guys don't tell on other guys," Kilborn says smugly. "Chicks do that. You're not a chick, right?" Ultimately, beyond Ferrell's hilarious gymnastics routine and Vaughn's Britney-influenced school-spirit dancing, "Old School" is really about reinforcing the social order, not destroying it. When it comes to "boy-band ass," Beanie is all talk and no action, and while Frank the Tank may be grossly unprepared for family life and its Home Depot excursions, he pines for it wistfully once it's gone. "Old School" is like that after-work beer or Friday-night poker game where you bitch and moan about the burdens of male adulthood. It's only fun because you don't really want out.