President Bush says hydrogen fuel-cell cars guarantee a pollution-free future. But there's a catch: Where's all the hydrogen going to come from? 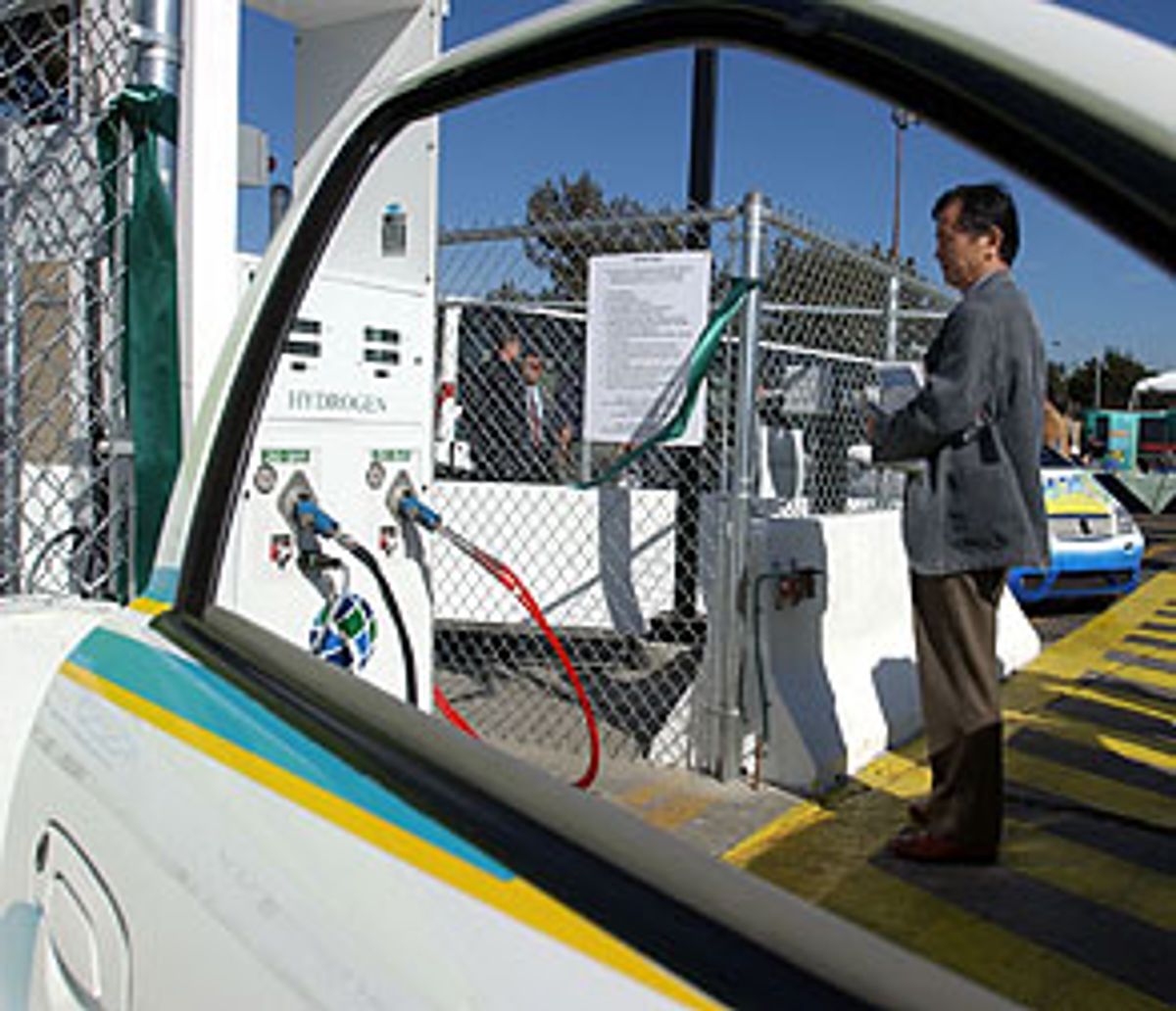 On Oct. 30, 2002, a hydrogen fueling station opened in Richmond, Calif., with the kind of local fanfare typically reserved for the groundbreaking of a new civic institution, like a public library or a Wal-Mart.

The mayor of Richmond, Irma Anderson, was on hand to fill up a Ford fuel-cell prototype, while Rep. George Miller pumped hydrogen into a Hyundai SUV. The goal: to show that anyone -- even a member of the U.S. House of Representatives -- can gas up one of these newfangled fuel-cell vehicles.

Hydrogen fuel-cell cars have long been popular with environmentalists eager to escape fossil fuel nastiness, and earlier this year President Bush boosted hydrogen's public profile when he lent the cause his bully pulpit and promised federal budgetary support to these "pollution free" cars. Cars that run on electricity generated from hydrogen fuel are a dream that easily draws bipartisan support: a futuristic, technocratic cure for the country's overdependence on foreign oil and environmental problems.

It's not a dream that will be realized tomorrow or even next year, however. A host of serious technological hurdles must be overcome before gasoline is obsolete. There are the questions of how hydrogen will be stored and distributed on a large scale. And then there's the problem that hydrogen isn't necessarily the environmental panacea that its advocates proclaim it to be. Hydrogen doesn't occur in a natural state, like coal or oil or natural gas -- it must be produced by a process that itself consumes energy, with inevitable consequences for the environment.

Take the Richmond station, which generates hydrogen fuel by electrolysis, a process that separates water into hydrogen and oxygen. Using technology from Canada-based Stuart Energy, the separation process is powered by electricity. The catch: The electricity comes off the grid.

"You can connect to the grid, or you can connect to renewable sources like wind and solar," says Wanda Cutler, a spokeswoman for Stuart Energy. "The grid is very clean, and you don't necessarily have to make your hydrogen during peak periods."

The grid is very clean? In the United States more than 50 percent of power plants are coal-fired, while renewable sources, like wind, account for less than 2 percent of electrical energy, according to the Union of Concerned Scientists.

"If you take the electricity from the current energy mix in the U.S., then in fact it doubles the CO2 [produced] per mile," says John Turner, a principal scientist at the National Renewable Energy Laboratory in Golden, Colo.

Translation: Driving a hydrogen-powered car juiced with fuel generated by electrolysis could actually be worse for global warming than sticking with gasoline.

"Electrolysis totally defeats the purpose in terms of greenhouse gas emissions," says Sandy Thomas, the president of H2Gen Innovations in Alexandria, Va., a start-up with a prototype for a competing hydrogen-generation system that converts natural gas into hydrogen at the gas station. Even if future hydrogen were solely generated from natural gas, as is currently the case for most hydrogen production, it still wouldn't be pollution free.

So what's the answer? For environmentalists, the only way to go is to make sure the electricity to separate the hydrogen is generated from renewable energy sources, like wind, solar, hydroelectric or geothermal energy.

"If we're going to a hydrogen economy, we must simultaneously move toward renewable electricity," says Turner, who conducts research on photoelectrolysis to make solar power more efficient.

But President Bush, despite his enthusiasm for clean cars, has apparently not figured out this part. In the same federal budget where Bush asked for more money for his hydrogen initiative, he cut funding for some renewable-energy alternatives, like wind, while increasing spending for nuclear energy. In fact, the Nuclear Energy Institute, a pro-nuke trade group, hailed Bush's commitment to hydrogen with this headline on its Web site: "President Bush Calls for Use of Nuclear Energy to Power U.S. Hydrogen Economy."

Nuclear energy isn't exactly pollution free. Of the many challenges involved in bringing cars that run on hydrogen to market -- fuel infrastructure, automotive technology, cost, safety -- this may be the biggest hurdle to the cars' having a real-world impact: Where will the hydrogen come from?

In Bush's 2004 federal budget, submitted to Congress on Feb. 3, the president designated $273 million for research into hydrogen fuel cells, including studies on deriving hydrogen from coal ($5 million), nuclear sources ($4 million), natural gas ($12.2 million), and renewable alternatives such as solar and wind ($17.3 million).

The nod to the old-school energy industry disturbed environmentalists, since it's hard to call coal the road to a "pollution free" car.

"None of this money should be going to coal. It's like running to McDonald's if you want to lose weight," says Brendan Bell, a spokesman for the Sierra Club.

Environmentalists found it even worse after Bush viewed fuel-cell-powered cellphones, laptops and scooters at an event at the National Building Museum on Feb. 6. The president then touted nuclear fusion as one promising path for producing hydrogen. "The energy produced will be safe and clean and abundant," he said, not bothering to mention the nuclear waste byproduct. "If we develop hydrogen power to its full potential, we can reduce our demand for oil by over 11 million barrels per day by the year 2040," he cheered.

There's even money in the new budget to support technological research into reforming gasoline into hydrogen right onboard a fuel-cell vehicle in order to power it.

But how much of an impact will using gasoline for hydrogen production have on reaching "energy independence"? According to the Department of Energy, some 96 percent of hydrogen around the world is produced from fossil fuel sources such as natural gas, oil and coal. Even with the help of hydrogen, weaning American drivers off fossil fuels will be a challenge.

The vast majority of hydrogen used in the U.S. today, however, has nothing to do with foreign oil: It is generated by the "steam reforming" of natural gas, according to Turner. In steam reforming, extremely hot steam (700-1,100 degrees centigrade) is mixed with methane gas in a specialized reactor.

The process is only 85 percent efficient, meaning that some energy is "lost" when natural gas is converted to hydrogen. Which raises the question, why bother? Why not just convert combustion engines to run on natural gas and be done with it?

Scientists say that while some energy is wasted, a fuel-cell vehicle powered with hydrogen derived from natural gas is still more efficient than, say, a car powered by natural gas.

"Energy is lost," says David Friedman, a senior analyst for the Union of Concerned Scientists, "but fuel cells are more efficient than internal combustion engines using natural gas, so they more than make up for that."

The environmental benefit is also considerable. "[In fuel-cell cars] the vehicle is zero emission. The compressed natural gas vehicles on the road are low emission, but they're not zero," says Turner.

Most of the cars and buses at the California Fuel Cell Partnership, a research consortium of automakers and energy companies, get their hydrogen through just such steam-reformed natural gas. The automakers in the partnership already have 21 cars and three fuel-cell buses on the road in California, either in prototype or actually leased to customers.

Natural gas is abundantly available in the U.S., so going that route will help energy independence. Plus, driving a hydrogen-powered car with the fuel derived from natural gas will lead to cleaner air in cities and near freeways. It will even cut greenhouse gas emissions by one-half, according to Turner.

"Natural gas is viewed as the fuel to bring us to a hydrogen economy, because we can extract hydrogen from natural gas. It's more plentiful, and it produces less carbon dioxide when it's burned," says Brian Adams, a public information officer at the Rocky Mountain Institute.

Still, the conversion does initially produce CO2, making the resulting fuel-cell cars not quite "pollution free."

Here's the environmentalists' dream for a hydrogen economy: 100 percent hydrogen-powered vehicles running on fuel generated through electrolysis, where the energy used to electrolyze the water is created through solar power or wind power. That would also greatly please those in favor of energy independence, since we have plenty of wind and sun right here. "We don't have to go to the Middle East for sunshine," says Turner. "We've got plenty out in the Mojave Desert."

But Bush's 2004 budget reduces the amount of research dollars going into renewable-energy sources over the previous year, according to the Union of Concerned Scientists. For instance, the administration recommended cutting the budget for wind power by 5.5 percent.

"These budget cuts reduce the chance that the Bush administration's hydrogen plan will deliver on its promise," said Friedman. "We need a shift in budget priorities toward renewable energy sources and away from fossil fuels if we want to have a clean, homegrown hydrogen future."

Still, federal scientists at the National Renewable Energy Laboratory say that their research will benefit from the new attention from the top, according to George Sverdrup, technology manager for the lab's hydrogen fuel cells and infrastructure technologies group.

The lab is researching producing hydrogen from biomass, including Georgia peanut shells. "We're not saying that peanut shells are going to provide the hydrogen for the country, not at all," says Sverdrup. "But around the country, there are different types of biomass that right now are waste material."

Turning agricultural waste into hydrogen fuel could still produce a carbon byproduct, for which other projects at the lab are exploring ways to create a commercial market. Even renewables are not necessarily CO2free.

Research into renewables at the lab includes deriving hydrogen from certain algae, and making hydrogen through electrolysis that uses solar energy more efficiently.

While the U.S. government is cutting funding for some renewables, other countries are taking them more seriously. Ron Pernick, a principal at Clean Edge, an energy consulting firm, points out that the Japanese environmental ministry is funding a study that uses wind power to convert seawater to hydrogen. The same ministry, according to Adams of the Rocky Mountain Institute, has set a mandate of having 50,000 fuel-cell vehicles on their roads by 2010.

It's also the Japanese automakers -- Honda and Toyota -- who have gotten the keys to fuel-cell vehicles into the hands of consumers in California before American automakers have.

Like the nuclear energy industry, renewable-energy advocates still have high hopes for their role in hydrogen. "It means a terrific market for wind generation. If you take electricity and shoot it through an electrolyzer to make hydrogen, where do you get the electricity from?" says Joe Richardson, president of Harnessing Dakota Wind, who believes that wind will be able to produce hydrogen more cost effectively from electrolysis than through the steam reformation of natural gas.

But even those who would like to see a hydrogen economy, fueled by the wind and the sun, have their doubts about what part renewable energy will play.