Re: The debate with the Great Satan. Remember what to say if he brings up "fixed elections," and whatever you do, put on your earth tones! 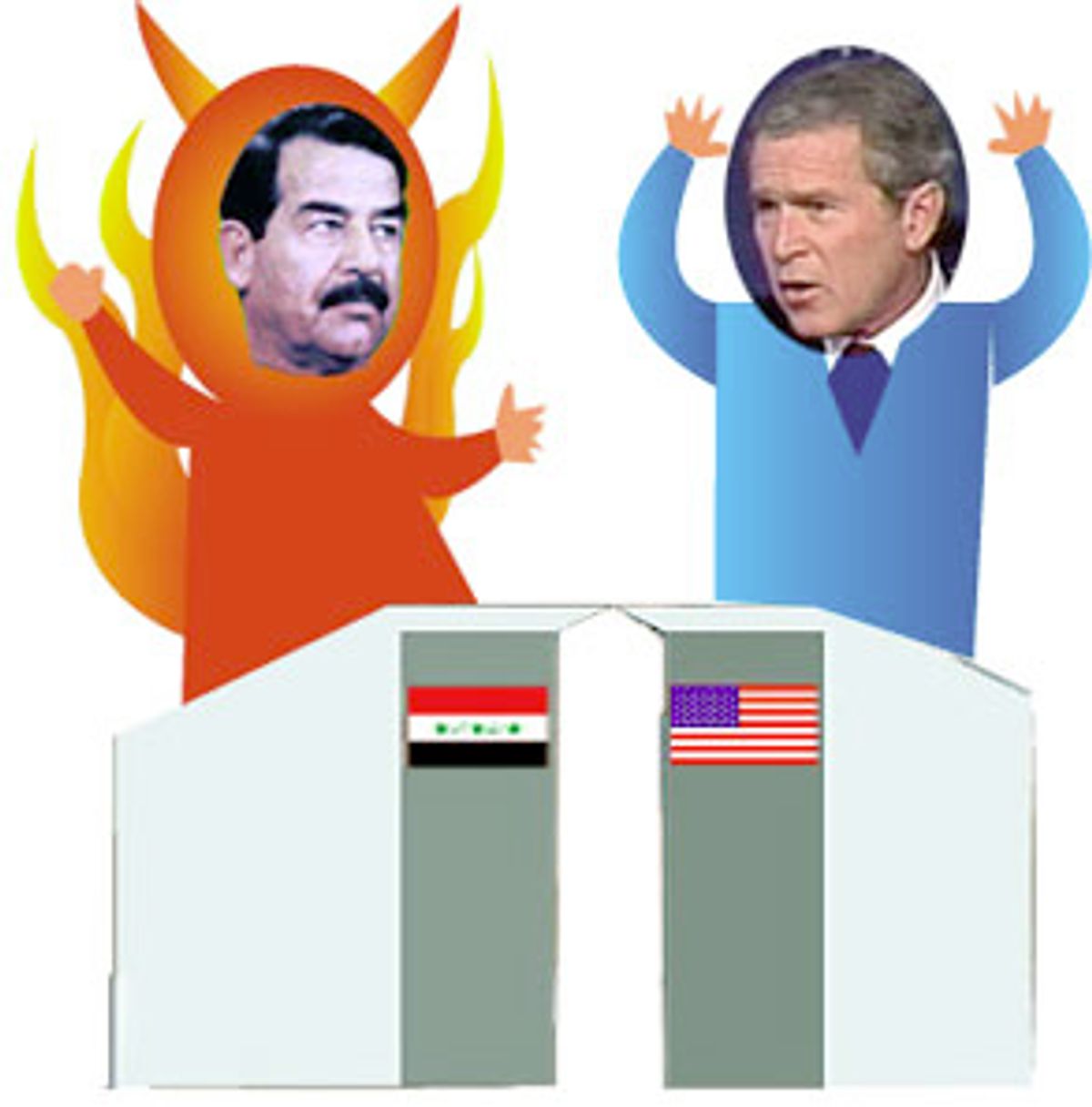 TO: SADDAM HUSSEIN
FROM: TARIQ AZIZ, LEAD NEGOTIATOR
SUBJECT: THE MOTHER OF ALL DEBATES
DATE: FEBRUARY 2003

As you know, negotiations are continuing for the debate you requested with the Great Satan. The purpose of this memo is to update you on the progress of these meetings and offer some debate strategies.

The advice that follows is quite candid, and I humbly beg you, our glorious leader, please do not shoot, gas, or dismember the messenger.

To begin with, Larry King and CNN offered to host the debate. Although that would ensure a global audience, we dismissed this offer for three reasons. First, we seem not to need to convince the globe. Second, Larry King throws softballs, but he is, nevertheless, a Jew. Third, CNN proposes the debate take place in a "town hall" forum, taking questions from the audience. I raised the issue that it is unpatriotic and even undemocratic for any person to question the God-given authority of a nation's leader. Karl Rove agreed.

As a result, the debate will be sponsored by Al Jazeera and what we are told is its American counterpart, Fox.

In terms of preparation, we have set up one Debate Camp and several decoys. We have also made an initial inquiry into who would be willing to act the part of President Bush. We are still waiting to hear back from Sean Penn's people.

Rest assured, and for your benefit, O unrivaled leader, we will provide whoever plays the Great Satan with questions and lines of attacks you can expect to hear.

For instance, you can expect the infidel Bush to accuse you of being an autocratic war-hungry madman who secures his power through family connections and fixed elections -- a man who stockpiles chemical weapons and has impoverished his own people.

As a response, we recommend reminding the American president that on each of these accounts, he has done the same.

You may even wish to cite the following statistics provided by our new economic advisor, Paul O'Neill. In just two years, the American people have lost over 2 million jobs and consumer confidence is at a 10-year low. There are many more of these if you are interested.

We believe that you may be asked about the death penalty and how you would respond if your wife was raped and murdered. Do not answer, "Which wife?" It's bad form to answer a question with a question.

You can also expect Bush to talk at length about America's military strength and the dedication and experience of its leaders, like Donald Rumsfeld.

I truly believe that this can be "the moment."

It is equally important, however, to recognize that these debates are not just about substance, but style. That's why I suggest that you wear your desert camouflage fatigues. Earth tones always play well, and we need to soften your ruthless alpha-tyrant image. For that same reason, we think it best if you refrain from firing your rifle into the air.

To make sure that our message is reinforced after the debate, I have approached several Turkish representatives to act as surrogates in the "Spin Room." I find their $30 billion price tag a little high, especially given that both Jacques Chirac and Gerhardt Schroeder have agreed to appear on your behalf for free.

Finally, sir, we have arranged for an instant poll to be taken immediately following the debate. We have every reason to believe that you will do quite well. I don't want to get ahead of myself, but we're looking in the 100 percent ballpark.

Good luck. I have no doubt the debate with the Great Satan will prove to be a glorious and a splendid day for you and for the people of Iraq.

Eric Schnure and Jeff Nussbaum are freelance writers who occasionally dabble in comedy.