Who wants to be married by America? 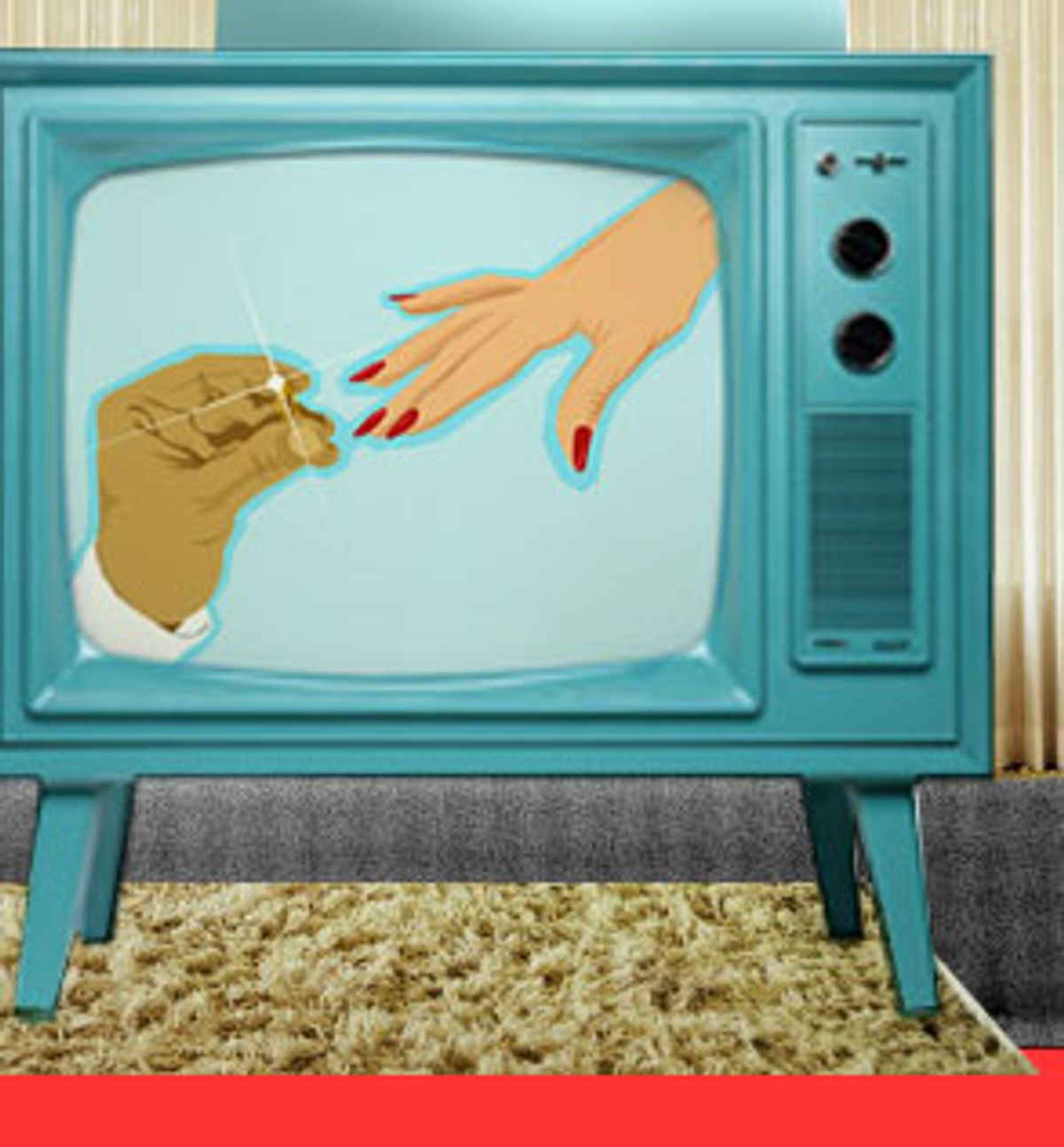 On the surface, there's nothing terribly scandalous or cynical about "Married by America," Fox's latest foray into the lucrative science of civilization erosion. This time around, we're not talking chateaux in France, million-dollar jackpots, backroom catfights, obligatory hot-tub scenes, or humiliating shots at pop stardom. This time, by promising to marry off young couples according to the votes of the audience at home, Fox is dealing in human-size desires -- a husband, a wife, a nice house (promised to the couples who decide to stay together), a nest egg. "Joe Millionaire" it ain't.

The show's first episode is entertaining but wholesome, flashy lights and ample displays of surgically altered flesh notwithstanding. First we are introduced to five young men and women, all attractive, all ostensibly seeking mates. The typecasting is as expected: Jill, Stephen, Billie Jean, Jennifer and Matt -- the Princess, the Sensitive Dreamboat, the Bombshell, the Good Girl and the Really Great Guy, respectively. Each murmurs a rehearsed platitude about what he or she is seeking ("I just want someone who likes me for me," "I need a guy with a great personality," "I'm ready for the right girl") and then sent off into the wings -- to await America's choice of suitor.

Twenty-five contestants, five for each of the five singles who have been selected to find mates, saunter onstage and read tantalizingly banal self-introductions from off-screen idiot boards that range from the expected "I am looking for my best friend, and I hope you'll help me find her" to the groan-worthy "My name is Denise, and I am a wildflower" to the jaw-droppingly dumb -- the handsome Frenchman who dutifully intones, "I may not have eenvented zeee French kiss, but I have certainleee perfected eeet."

It all seems harmless. Cheesy, but harmless.

And for anyone who's ever had to meet the folks, it's also easy to relate to. Before the 25 candidates can be subjected to the will of the people, they must face the parents, friends, roommates and co-workers of the eligible bachelors and bachelorettes. The hopefuls are paraded out in groups of five before these judges, who grill them on such character-revealing questions as "How would you define your sexual appetite?" and "What's the most selfish thing you've ever done?" and "Do you like cats?"

Never mind that most of the contestants are aspiring actors and models, or people who, for one reason or another, want to live under floodlights for a little while. The experience of trying to impress the family and friends is universal, and it's impossible not to sympathize with the men and women squirming under fathers' penetrating gazes or best friends' thinly disguised deal-breakers -- questions for which there is only one correct answer. (When Jill's Long Island father stares down a reject and says, "I'd like to start this conversation with 'good-bye,'" one suspects that not only does he have the juice to get the young man kicked offstage, but he might have the juice to get the poor sucker whacked.)

Still, after the first two episodes (one Monday night and one Wednesday) are concluded, we'll spend the next seven weeks with the five couples, watching them try -- or pretend to try -- something we've all faced, possibly more than once in a lifetime: making a relationship work.

As Matt Arden, 25, the Really Great Guy -- Southern, dumbo-eared, "involved in TV production," and without a doubt the series' ace in the hole -- explains in his on-camera interview, "Who's to say that meeting a person on TV isn't the same as meeting in a bookstore or a bar?"

Indeed, who's to say? With one question, Matt lays all of our practiced cynicism to rest. We believe him when he says, "Game? I've got no game. If I had game, why would I be here?" We cheer for him wholeheartedly when he adds, "My girl-picker is broken, so I thought I should give you people a try." He shrugs, and we shrug with him.

You're with him from the moment the searchlights first zoom in on him; clad in a dorky striped sweater, he exudes decency, self-deprecation. His ears are too big. You want to fix him up with your sister. No, you want to send him to Pakistan, to Iraq, as an "aw-shucks, Mr. Hussein, we can work it out" peace emissary. You think if those big bad al-Qaida people could just shoot one game of pool with this guy, they'd give up. He'd explain to Saddam what incredibly good and kind people Americans really are. He could redeem us.

Even without Matt's disarming winsomeness, the format of "Married by America" is so resonant, its end goal so common, its winnowing process so relatively bloodless, that it doesn't lend itself well to critical skewering. Instead, it invites us to phone in. And we do, in droves. I tried to cast a vote myself, and the line was busy.

What's so scandalous about a little arranged marriage, after all? Nothing, according to 60 percent of the world's population. We're agreeing to do it in public, under bright lights, sponsored by an Adam Sandler movie. Why not? What could be more American?

Fox bills the show as "the most controversial relationship experiment ever tried on television," but for real controversy, go back to 1968: the original "Star Trek" and television's first interracial kiss. Forget that the writers had to make sure Capt. Kirk and Lt. Uhura kissed only because they were under duress, or that the episode didn't air right away; it was still daring. But that was more than 35 years ago, and so much has changed since then.

Or has it? If we take Fox seriously -- and the ratings of these shows tell us we must take them very seriously indeed -- there is no need to fear for miscegenation anyway, because according to "Married by America," pretty much everyone in this country is white. Oh yes, and straight.

There are no black people in America. There are no Asians in America. There are, of course, no gays. There are very few Latinos. Not only are they not sharing wedding canopies with white people, they're not even sharing a stage with them. And herein lies the true creepiness of the latest reality show incarnation -- not the dubious veracity of its actors, nor the scripted romances, nor the vacuous patter that substitutes for real conversation. It's an orgy of vanilla heterophilia, a fantasy of a straight, lily-white America that should have gone the way of the original "Star Trek" enterprise.

It should have, but it hasn't. And that is scandalous.