In Tehran, even the hookers wear head scarves, and other things I learned from Iranian director Abbas Kiarostami's extraordinary film. 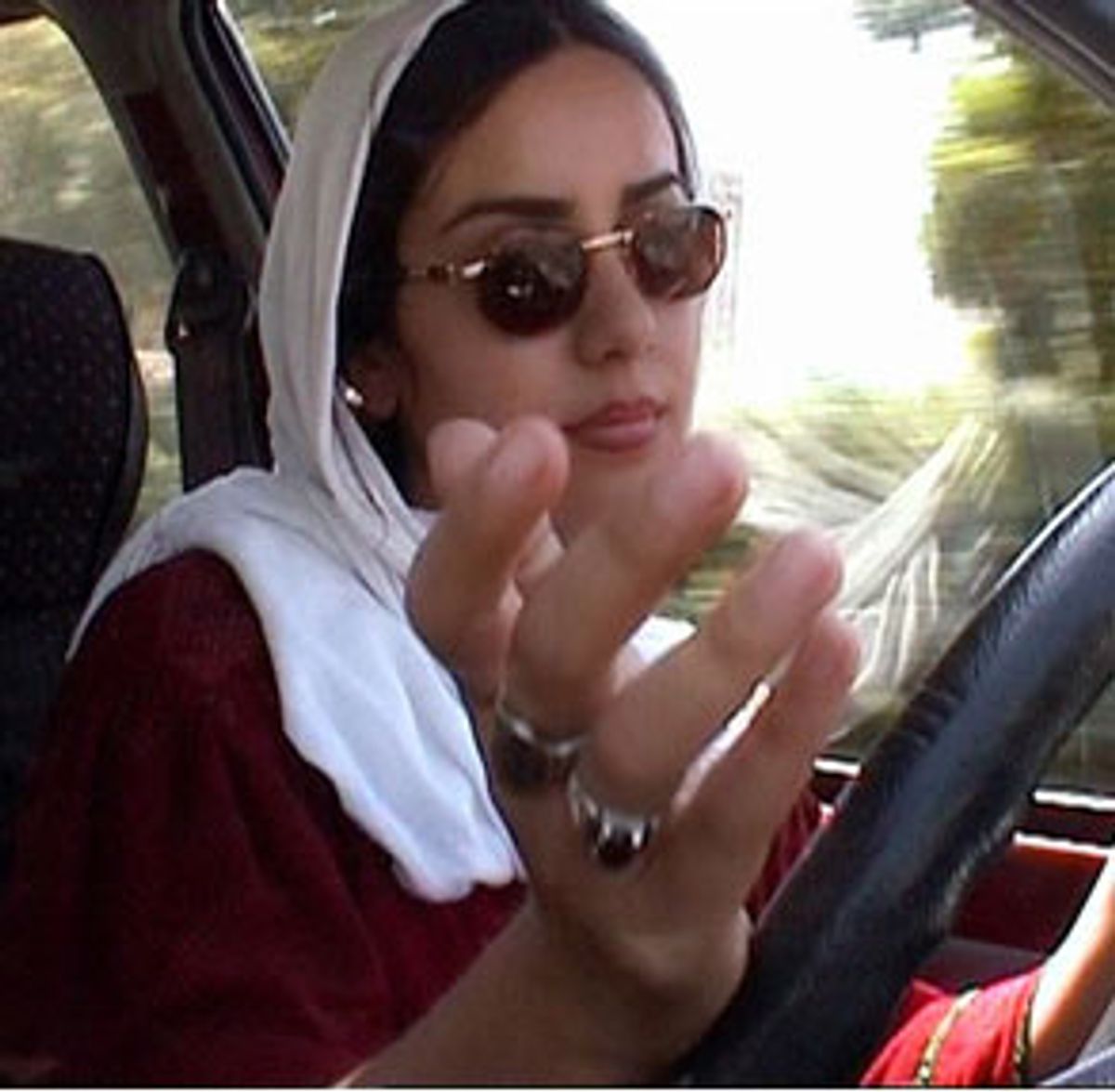 There's so little to "Ten," the new film by Iranian director Abbas Kiarostami (which opens this week at New York's Film Forum, with other cities to follow), that it threatens to destroy your understanding of what a movie is and how it's made. Shot entirely inside a car, using a digital-video camera affixed to the dashboard, it shows us 10 disconnected scenes in the life of a middle-class, divorced woman in Tehran.

Those who have seen earlier Kiarostami films like "A Taste of Cherry" and "The Wind Will Carry Us" already know that he's the world champion of movies shot in cars, but "Ten" represents a new level of microscopic focus. His nameless driver (Mania Akbari) picks up her bossy, difficult 10-year-old son and quarrels with him (several times), buys a cake (twice), gets stuck in traffic with her sister. She gives rides to various strangers, who begin to seem symbolic: an elderly religious pilgrim, a prostitute, a young woman with boyfriend troubles. Sometimes we see the driver's seat and sometimes the passenger's, but the camera never moves. Only once can we see more than a few feet beyond the car window. This is one of the most stringent, constricted films ever made.

Yet out of these unpromising elements comes the ultimate lesson in less-is-more cinema, an intimate and revelatory character study as well as a brilliant, almost symphonic rendering of the distracted, anxious, half-alienated and half-meditative state in which we spend vast amounts of our lives. If Alexander Sokurov's one-take extravaganza "Russian Ark" explored the outer limits of maximalist spectacle that the new digital filmmaking technology makes possible, "Ten" is the minimalist response: Ninety-four minutes of almost random experience, confined in a few cubic feet of space.

Kiarostami, the most famous (and most controversial) of Iranian filmmakers, has defined "Ten" as "the rejection of all elements vital to ordinary cinema." Although he is credited as writer and director, his principal role was to select and edit scenes from some 23 hours of semi-improvised "dashboard cam" footage; he was not even present for most of the shooting. "Ten" might not be the easiest film for Hollywood-conditioned viewers to get into or to enjoy, but it never seems like an arid experiment. What strikes you most about it, in fact, is its lack of artifice, its intimacy, humanity and directness. There were moments in "Ten" when my attention wandered, but I can't think of a movie I've seen in the past year that moved me so profoundly.

I deliberately wrote, two paragraphs back, that "Ten" explores the space where "we" live much of our lives. Yes, this is a film made in a nation quite different from ours (a charter member of George W. Bush's "Axis of Evil," in fact), and in its tightly focused, seemingly careless fashion it paints a gripping street-level portrait of women's lives in a rapidly evolving society. But "Ten" is a movie about the contradictions of human nature, not a Third World feminist lesson-flick. All of it, with or without the head scarves and the Farsi dialogue, could take place in Paris or London or Dallas. It's a movie about "us," not about "them."

That's not to say that "Ten" isn't directly critical of the restrictions placed on women's lives in a schizophrenic society split between modernity and theocracy. Akbari's driver is an attractive woman of 35 or so who's generally wearing designer sunglasses and the masterfully applied makeup of a stylish European fashion victim. She is also never seen without the mandatory Islamic head scarf, although it's wrapped loosely around her head to show off her lush, dark hair. That garment -- and the repressive if unstable social code it represents -- immediately becomes a central focus of our attention, and it plays a crucial role in the film. But to portray "Ten" as a critique of contemporary Iranian society, as some Western commentators are sure to do, is to miss much of its wit and intelligence.

Akbari rages at her son (Amin Maher), during their extended and troubling argument in the film's opening scene, about Iran's hypocritical divorce laws, which required her to claim that her ex-husband was a drug addict and a wife-beater. (The former spouses' actual relationship, as glimpsed through the car window during child-custody exchanges, has that strained, polite quality that anyone familiar with divorce -- which is to say everyone -- will recognize at once.) But she's also a neurotic and self-absorbed character who's capable of using the institutional sexism of Iranian society to manipulate her own 10-year-old son, as when she tells him huffily that he's a man and must make his own decisions.

When Akbari gives an old woman a lift to the mausoleum of a saint, where the woman prays daily, the driver at first seems tolerantly amused by the religious old biddy. But Akbari discreetly tightens her scarf a little, and a few scenes later we learn that she herself has begun to pray at the mausoleum, although perhaps more out of some kind of middle-class spiritual quest than an interest in Islamic orthodoxy. When she picks up a streetwalker one night and drives around interrogating the smirking girl about her life and her relationship to sex, the same inquisitive spirit seems to be at work. Alternately resentful and giggly, the passenger tells Akbari that prostitutes and wives do the same work -- one is a wholesaler, the other a retailer. (We never see the prostitute's face, which may have something to do with Kiarostami's perpetual dance with the Iranian censors. We do learn, however, that even Tehran's hookers wear head scarves.)

It's the sad-eyed young beauty Akbari befriends at the mausoleum -- who seems to be praying for God to make her reluctant boyfriend marry her -- who becomes the conduit for a momentary epiphany that crystallizes all this movie's themes in a single, unforgettable image. "Ten" isn't likely to mollify Kiarostami's critics, neither the Westerners who think he's too arty and sluggish nor the Iranians who think he's become too Western. It's a story about women in one particular country and in the world, a story about driving a car (which is the condition of being everywhere and nowhere at the same time), a story about a vain and difficult person whom we forgive entirely because we recognize her, we know her, we become her.