I live blocks away from the Brooklyn mosque accused of funding al-Qaida, where angry Muslim men rage against John Ashcroft, blame 9/11 on the Jews, and ask me out for coffee. 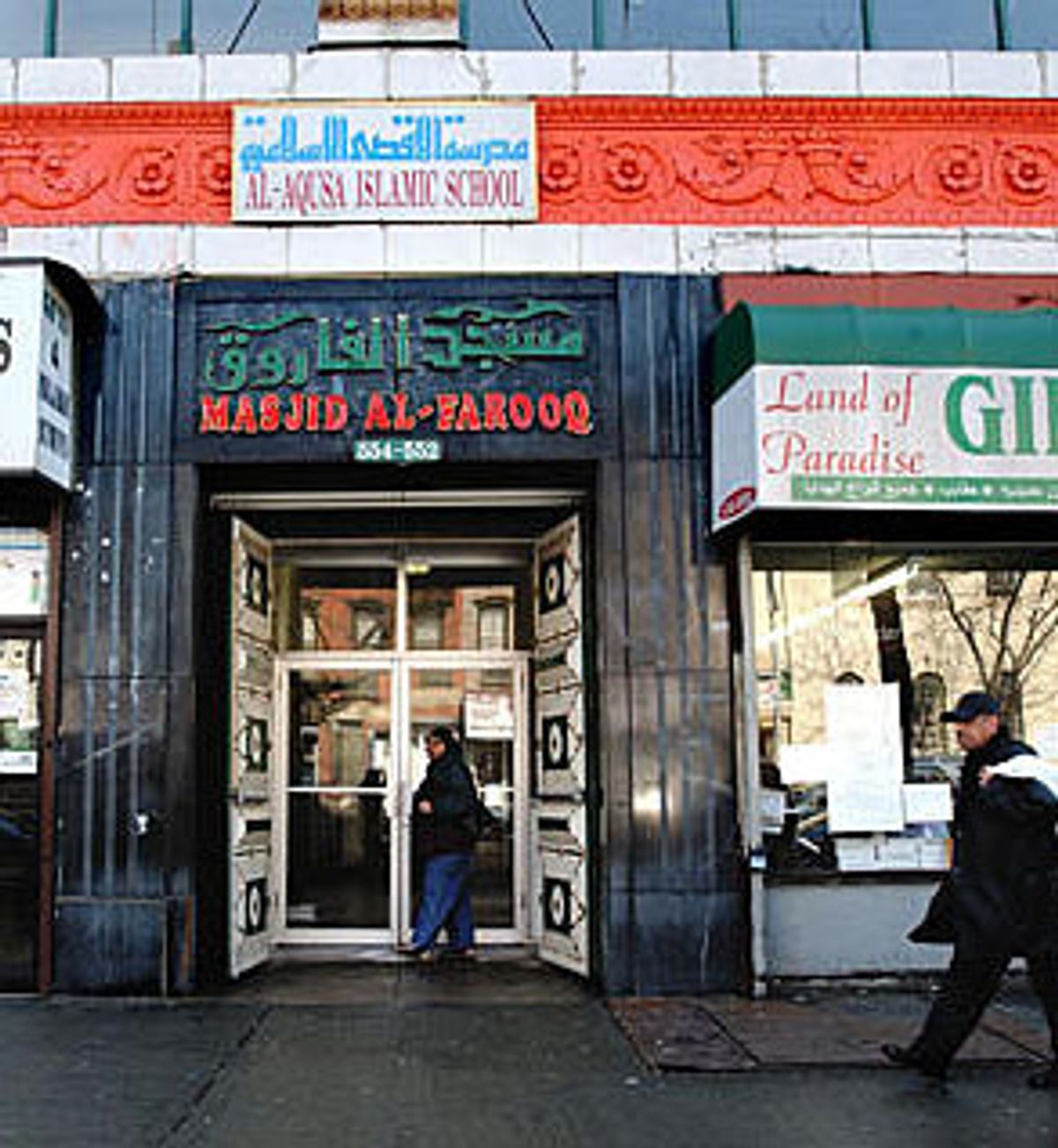 On Tuesday, Attorney General John Ashcroft told Congress that Muhammad Ali Hassan al-Mouyad, a Yemeni cleric, raised $20 million for al-Qaida at the Al-Farooq mosque in the Boerum Hill section of Brooklyn, less than three miles from the World Trade Center site. To many who've paid attention to the mosque over the years, the charges weren't entirely surprising: Al-Farooq is famous for its extremism and has been tied to radical Islamist activity since the late 1980s.

Sheik Omar Abdel Rahman, the one-eyed cleric currently imprisoned for his role in the first World Trade Center bombing, was imam at the Brooklyn mosque for two months in 1990. A Chicago Tribune article from Dec. 11, 2001, reports that Al-Farooq served as a base for Ali Mohammed, a "top military trainer" for Osama bin Laden who played a role in the 1998 African embassy bombings. According to the New York Times, the mosque raised money for Osama bin Laden until 1994.

Yet Al-Farooq's Muslim neighbors and worshippers furiously dismiss Ashcroft's allegations as the latest salvo in a government war against Islam, and as the charges against their mosque mount, so too does their rage at the United States. "This is a mosque for prayer, for prayer," says the mosque's president Amin Awad, a squat, jolly-looking man in a well-cut suit and trench coat. "We had nothing to do with Sheik Abdel Rahman -- I kicked him out. We have nothing to do with al-Qaida -- I never paid them one penny." He opens his jacket and says, "Here, search me. We will be more than happy if Ashcroft stops his incitement against Muslims."

In a neighborhood that's seen itself as under siege since Sept. 11, people seem to feel victimized by Ashcroft's charges, even as a few young hotheads express sympathy with the goals of al-Qaida. Conspiracy theories multiply in the growing alienation. Accusations against the mosque are "Jewish propaganda, from the Jewish media," says Ahmed Abed, a 48-year-old from Algeria who works in a neighboring Islamic store. "Anyone goes to the bathroom and shits, they say, 'The Muslims did it.'"

I ask Timothy Hicks, a 37-year-old follower of Louis Farrakhan, why everyone was so convinced that Jews were behind Ashcroft's allegations. "People around here are more in tune with what's going on," he says. "Abraham Foxman" -- the president of the Anti-Defamation League -- "is a real evil, demonic person. He's part of a cabal of Zionism that wants to rule the world."

Such sentiments are largely limited to the blocks right around the mosque. A few blocks west is an older, more prosperous Middle Eastern neighborhood where anti-Semitism is almost unheard of. The area around Al-Farooq, by contrast, is a mix mainly of newer immigrants from North Africa and black Muslims, and a sense of dispossession fuels a hothouse of persecution fantasies. "Before, people feel good in America, the country of democracy, of justice," says Adbul Mandi, the soft-spoken 40-year-old clerk at Al Quaraween Islamic books. "Now they feel like they are marginalized." On those few blocks, a chasm seems to have opened between Muslims and their non-Muslim neighbors.

I'm one of those neighbors. My apartment is a 10-minute walk from Al-Farooq. My Jewish mother-in-law lives a block and a half away from the mosque; you can hear the muezzin's call to prayer from her backyard. My sister-in-law's coffee shop is a block away, and on Wednesday it was buzzing with gossip about the street's rumored terrorist underground.

Still, the street remains friendly and welcoming, and it can be hard to reconcile how comfortable it is with the mounting paranoia I hear whenever talk turns to politics. People don't become hostile when I tell them I'm Jewish; it's as if they hate Jews not as individuals but as some mystical oppressive force responsible for all their dissatisfactions. The mosque itself is a symbol of that cognitive dissonance. It's both a neighborhood fixture, so familiar I hardly notice it, and, if the government is right, a haven for those who would happily see me killed.

Last October, when it was revealed that the Washington sniper was a Muslim convert, people in the neighborhood told me they didn't believe it, and said the news was part of a Jewish plot to defame Muslims. Now they're even more insistent. "Like the Jews didn't do it," says Waraith Abdel Habib, spitting out the word like something rancid. A 64-year-old black man in a gold-embroidered skullcap carrying a massive wooden staff, Habib says he was innocent of the rape for which he served 17 years in prison. "The news media lie caused me to do almost 20 years. What makes you think they won't lie again?"

Ahmed Nabawi, the 44-year-old Egyptian owner of the Fertile Crescent grocery story, apologizes when I recount the anti-Jewish slurs I've been hearing. "When you hear such thing like this, you have to forgive them," he says. "They're under a lot of pressure. Everyone is scared to go to the mosque. Women wearing the hajab, when she walk alone, she walk with fear. My neighbor has started receiving threatening phone calls."

Now, as the INS demands that men from Muslim countries register with the government, as John Ashcroft accuses their mosque on television, as the world girds for war with Iraq, the young guys who hang around Al-Farooq talk about the end of the world. "If I make a little bit of money, I'm outta here," says Abdul, a 30-year-old Moroccan street vendor. The antichrist is coming, he says, and when he does, "the only places he won't be able to get to is Mecca and Medina." Most Muslims call the antichrist the Dajjal. Volumes about him fill area bookstores.

Abdul, who has a light beard, soft eyes and a cut on his nose, isn't a fanatic. "I'm a Muslim, but I'm not a very strong Muslim," he says. I met him outside the Tree of Knowledge bookstore, a few feet from Al-Farooq. I'd smiled in his direction earlier, and he invited me inside the bookstore to talk. When I told him I was a journalist, he shook his head sadly and said, "I told my friend a girl smiled at me, and he said, 'She's probably a reporter or an FBI agent.'"

That friend, also from Morocco, soon joined him. Like Abdul, he wants to leave America. "I came here when I was 16. It wasn't my decision. I don't find the way of life that I need in this country. I've been in high school here. The family has no control over their children. In Morocco, you go to school to learn. Here, you go outside of class, and you see people kissing each other. That's a bad thing."

Interestingly, the only Al-Farooq worshipper who expressed real affection for New York was one of the very few females there, a woman from Bensonhurst with a Yemeni father and a thick Brooklyn accent. "I went to my father's country and it didn't feel like my country," she says. "This is my country. New York is cool. You go on the train and hear 50 languages." That very diversity troubles Abdul. He adopts a high, shrill voice and says, "In high school they tell you, 'Don't discriminate against the homosexual.' Your mom, if she beat you, you call 911. That's no respect."

Abdul is convinced allegations against the mosque are a lie. Like many in the neighborhood, he believes the charges against al-Qaida are false as well. Speaking of Sept. 11, he says, "They said Muslims did it, but there's no proof. If they did it, where is the black box?" He has a tape, he says, proving that the real culprits were the FBI and the CIA.

I have a tape like that too, a video called "911: The Road to Tyranny." Farrakhan supporter Timothy Hicks showed it to me at Al Quaraween Islamic books, and I bought a copy for $4.50. It's not a Muslim production. The video, which alleges that the FBI was behind both World Trade Center bombings, as well as Oklahoma City, was made by old-fashioned American survivalists determined to fight the "megalomaniacal Satanists" of the "New World Order." Similar tapes are for sale all over the Al-Farooq section of Atlantic Avenue. That could be why, beneath the Islamist gloss, much of the local paranoia mirrors that of all-American heartland crackpots.

It's hard to know how seriously to take the apocalyptic anger swirling around Al-Farooq. On one level, the people who live and pray there are no different from residents of many insular immigrant neighborhoods, where ignorance, fear and curiosity about the wider culture can exist side by side. Nor is their religious fervor very unique -- plenty of Christian communities are similarly awash in Manichaeism and messianic dread. But on another level, the mosque's historic ties to terror make it hard to dismiss all the rage as mere street corner bloviation. Al-Qaida might not be embedded there, but some of its ideology is. At Al-Farooq, one moment can feel like the TV show "24," the next like a comic riff from a Spike Lee Joint.

As I stand in the mosque's foyer after evening prayers, I'm approached by Makrem, a 27-year-old from Tunisia who'd glared at me throughout the day. A cocky, good-looking man in a black bomber jacket and baggy jeans, Makrem has a shaved head and vaguely Mongolian features and looks more like a homeboy Keanu Reeves than a budding jihadist.

I ask him about the mosque's terrorism ties. "It's a lie fabricated by Jews," he barks.

A thin 62-year-old man in round glasses, jeans and a white and red sweater is stepping into the elevator. Hearing Makrem, he pries the doors open. "It's not the Jews," he yells, stepping out.

Turning to me with a kind smile, he says, "It's the Freemasons," a secret society founded in England that's been inflaming the imaginations of conspiracists for hundreds of years. "Jews and Freemasons are the same thing," says Makrem. The older man shakes his head, his eyes mirthful, as if he's amused by Makrem's benightedness. "Freemasons want to control the whole world," he says, patiently explaining the history of Freemason mischief from the French Revolution through the Ottoman Empire. Then he gets back in the elevator.

As soon as he's gone, Makrem, flanked by Imed, a pockmarked 32-year-old wearing an elegant black wool scarf, resumes his harangue. "Whoever tells you Islam is a religion of peace is either mistaken or ignorant," he says. "It's a religion of peace and war, yin and yang. Write that down -- yin and yang. There's a war against Islam by the American government, and every rational human being has to defend himself."

A war in Iraq, Makrem says, "is the beginning of the end of the world, the third world war. Muslims are going to prevail and are going to rule the whole world."

I ask what will happen to me, a non-Muslim, in such a world. Imed says, "It depends on whose side you're going to stand." I ask what they think of al-Qaida, and Makrem says, "I cannot speak about that." Then he says, smirking, "You have to kill those who want to kill you."

Suddenly, his voice goes soft and he gives me a big, open grin. "Hey," he says. "Want to go out for coffee sometime?"