The sexy rapper Eve is like a classic cheesecake model or Rita Hayworth -- but with tattoos. 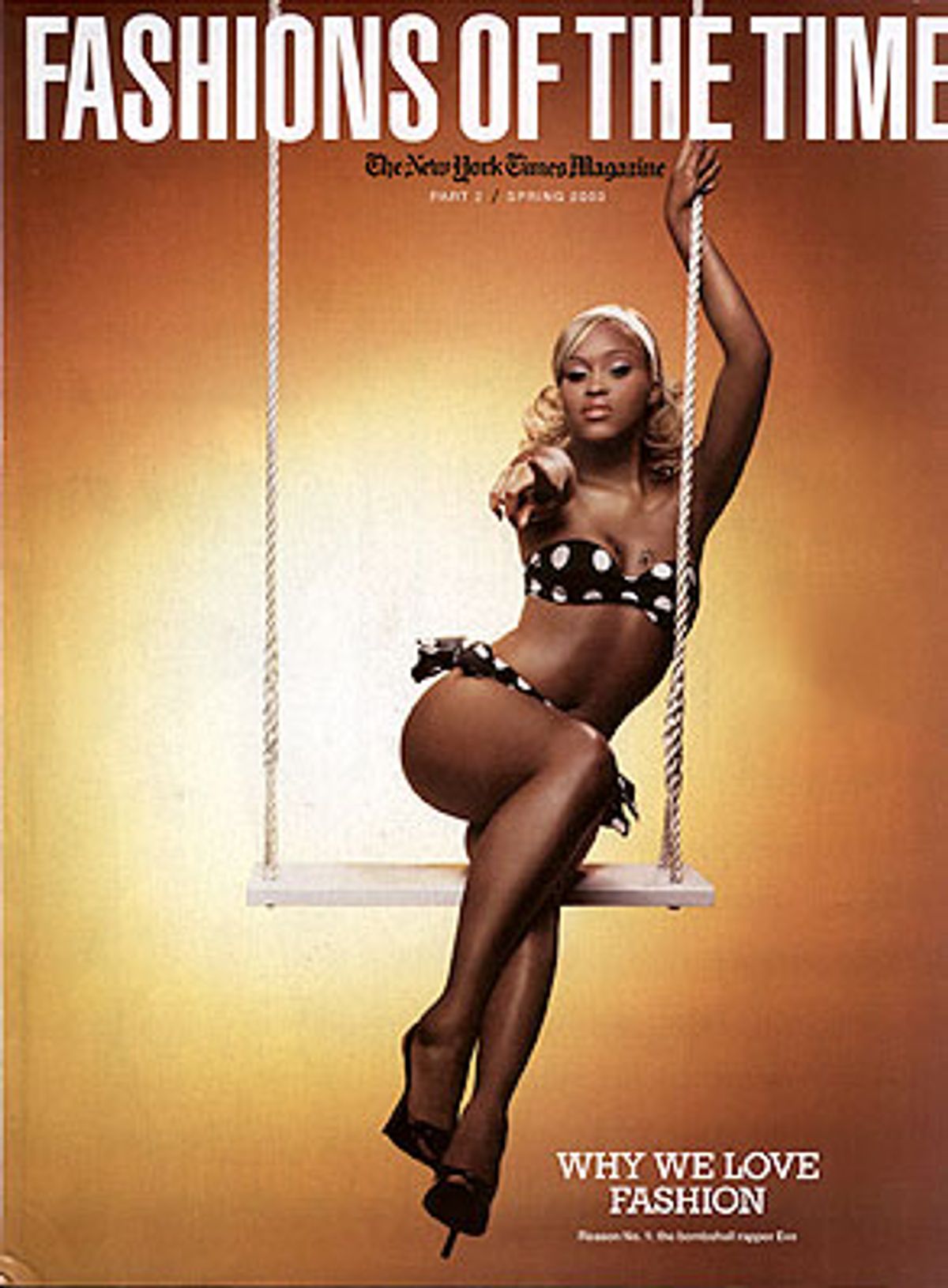 There's a scene in the 1989 movie "Glory" where troops of Union soldiers going off to fight the Civil War are cheered on by their families, lovers, friends. It's a scene that's been enacted in countless war movies over the years but here there's a difference -- every face we see is black.

"Glory" doesn't miss the irony that black soldiers fighting for the Union were fighting for a country that still was not ready to accord them basic rights. But it doesn't stop that scene from being stirring, and it's as good an example as any of how context can change meanings.

I've felt that way a lot in the past year watching the new black mainstream movies -- good ones like "Barbershop" and "Drumline" and even middling ones like "Brown Sugar." The stories are all familiar on some basic level and yet, because they are populated by actors and characters Hollywood has been content to keep on the sidelines, they feel fresh. You go to these black movies and feel like you're being treated as a member of an audience and not, as you almost always feel now at most mainstream movies, as one more tick in the studio's weekend grosses.

And I felt that way a few weekends back looking at the fashion layout of the rapper Eve in the New York Times' Spring Fashions of the Times magazine supplement. Shot by photographer and video director Stephane Sednaoui, and featuring outfits by Gucci, Donna Karan, Versace (inevitably) and Anna Sui, the photos feature Eve in a series of poses and outfits that recall the glory days of '40s cheesecake as epitomized by artists like Antonio Vargas and Gil Elvgren.

Eve isn't quite the naughty innocent those painters idealized, big eyes and cupid-bow mouths frequently pursed in a surprised "O." Her small, almond eyes are too knowing, too appraising, her full lips the most overtly sensual aspect in the hard set of her face. And no Vargas girl ever sported a tattoo, let alone the two delicate paw prints that splay outward from the top swell of Eve's breasts.

But the effect is something like that of one of the layouts Vibe ran a few years back with hip-hoppers reenacting poses from Hitchcock movies (the wittiest being the Notorious B.I.G. shot in profile to emulate the famous line drawing of Hitchcock's corpulent profile). Eve radiates mischievous pleasure more than anything else, seizing the chance to pose for these flirty photos with the glee of a kid who's been kept on the sidelines of the stickball game finally getting her chance at bat.

One of the longtime racial arguments in America has been whether blacks should emulate white style or find their own. At least in terms of our mongrel popular culture, it seems to me a moot point. Pop culture is always at its most fun and most interesting when things get mixed up, scrambled, when people take the inclusionary spirit of pop culture at its word and appropriate styles of dress, speech and music because, more than anything else, they're fun.

Of course, the mingling has led to horrors and profiteering, like Pat Boone emasculating "Tutti Frutti" to make it acceptable to white radio. And it's led to drivel from both sides, like the still-parroted cliché from people with wax in their ears and no sense of musical history that Elvis stole his sound from blacks, or the inevitable racist charge that greets any black actress who romances a white man on-screen (Whitney Houston in "The Bodyguard," Halle Berry in "Monster's Ball") that they're not black enough to be considered black. (Sort of a reverse on Nazi standards of racial purity where any Jewish blood was enough to make you Jewish.)

More often, though, it's led to marvels, like Ray Charles' accomplishing the unthinkable by bringing soul to his recording of "Oh! What a Beautiful Mornin'" or the Stones being scared out of one of their slumps (by the vitality of punk, among other things) and dabbling with disco in "Miss You," or Prince and his sidekick Jerome Benton re-creating the spirit of '30s art-deco screwball comedy in "Under the Cherry Moon."

The Sednaoui layout featuring Eve shares their spirit. Sednaoui -- and Eve herself, with real confidence -- simply proceeds from the assumption that someone as gorgeous as Eve, with that glowing, honeyed skin, belongs in cheesecake glamour poses. She's more adorable than sexy (though she's that, too), sporting a little golf outfit, or blowing bubbles in a sailor suit consisting of crop-top, hot pants and white cap. Maybe these shots are too tame to compete with the in-your-face jiggle to which hip-hop videos have accustomed younger audiences. But looking at Eve in a black bikini with white polka dots showing a healthy expanse of glorious leg while perched on an oversize swing, you can imagine the shot taking its place beside that famous one of Rita Hayworth in a silky negligee. Eve and Sednaoui are like Wile E. Coyote lassoing the far side of a canyon to bring it up against the one he's standing on. They're grabbing the past and rubbing it right up against the present, imagining a place where a pretty girl is a pretty girl is a pretty girl -- no matter what SPF sunblock she uses.