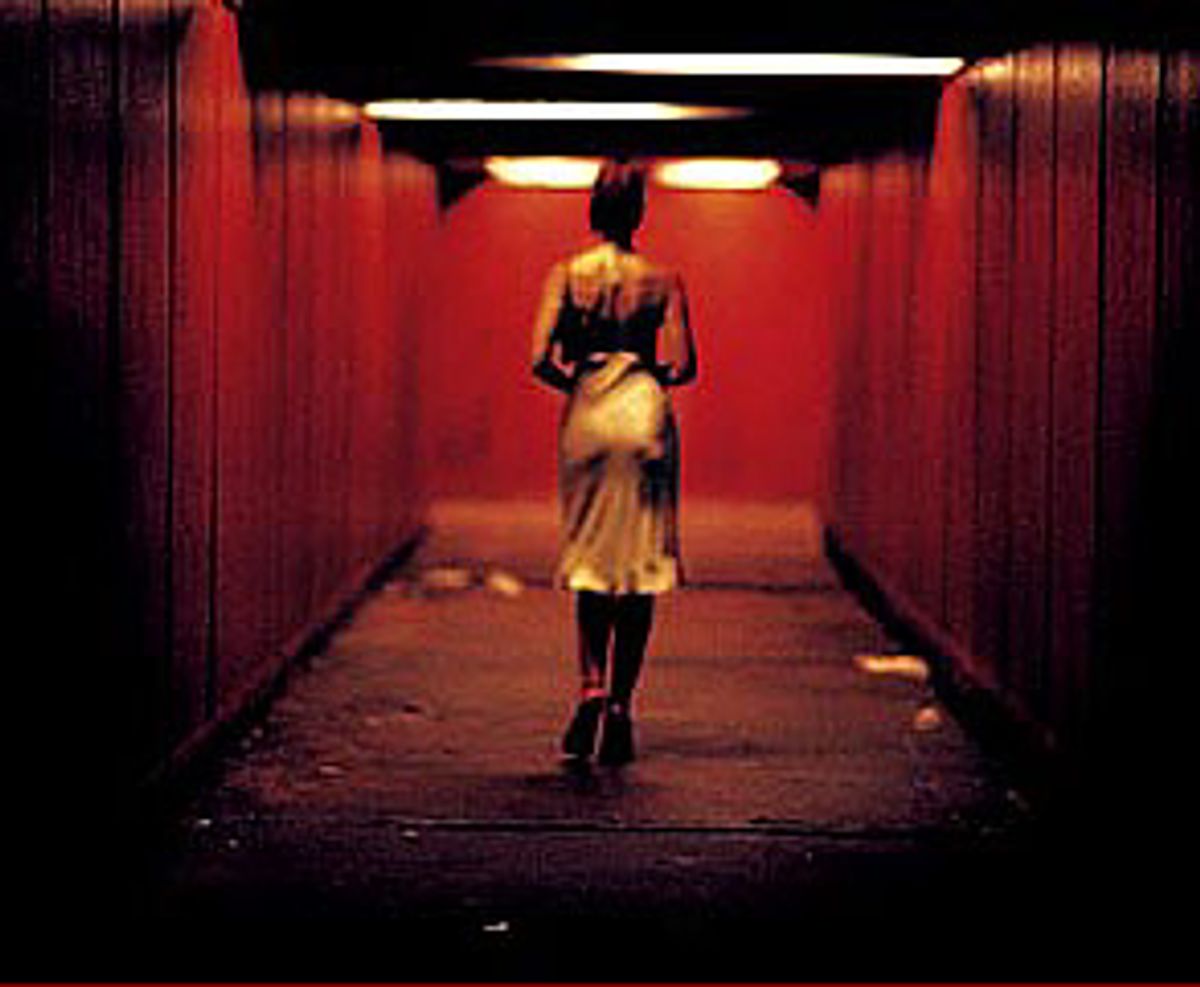 I'm prepared to defend "Irreversible" on aesthetic and maybe on philosophical grounds. But I don't have to pretend I enjoyed it. Since debuting at the Cannes Film Festival last spring, this shocker told in reverse (à la "Memento") by the Argentine-born French director Gaspar Noé has become a sharply divisive issue in the gossipy world of international film geeks. It's been called pornography, or a worthless exploitation flick, and certainly Noé is challenging you to have those reactions and then overcome them if you're tough enough or daring enough. In reaction to those outraged responses, on the other hand, the film has been praised as a masterpiece by some critics who really ought to know better.

Most major reviews of this film, including those in the New Yorker and the New York Times, have not mentioned this issue at all. There's no way to know whether that's because of editorial policy, considerations of "good taste," personal reluctance to engage with such an impolite topic or some combination thereof. On one level, this makes me a little anxious: Am I some kind of pervert for bringing it up? But frankly, failing to discuss this film's fascination with this particular "deviant" act and its implications amounts to refusing to discuss what "Irreversible" is actually about. It's a little like writing about William S. Burroughs without mentioning heroin and homosexuality, or writing about "Six Feet Under" without mentioning death.

"Irreversible" travels back in time, scene by scene, through the events that follow those traumatic nine minutes, and then the events that precede them. So it begins at night, with its three protagonists' lives virtually destroyed by a rape, a near-rape and a gruesomely misguided act of vengeful violence, and ends earlier the same day, in afternoon sunlight, with the beautiful young woman we have seen brutalized reading a book in the park.

Essentially, the film tells two stories, with the rape scene serving as the point of intersection and transformation between them. The first (which is to say the second, chronologically) is a botched quest for revenge, infused with an unbearably pretentious fatalism and darkness, which ends in total disaster. The second story is far subtler and more interesting, a delicate portrait of a romantic triangle whose incipient sexual tension and instability effectively give birth to the devastation that follows.

The poignancy of this structure -- the sense that the film has the power to rewind time and so undo all the horrible things it has shown us -- is at once manipulative and marvelous. In "Memento," the backward narrative (like the main character's gimmicky disease) primarily served as an elaborate game to bewilder the audience; here it becomes the realization of the unrealizable goal of so much literature and art, to recapture the past.

Noé has an intuitive sense of the pathos and power of his images, and that, combined with his tremendous technical facility, make clear that he's a serious and talented filmmaker, not a shallow schlockmeister. Whether he has anything to say that's worth saying -- and whether it's worth sitting through the punishment this film inflicts on the audience -- is quite another matter.

Many viewers, I predict, won't even make it to the rape scene. Some will be nauseated right out of the theater, either by the awful, seemingly pointless violence that precedes and/or follows it, and others by the seasick pitch and roll of Noé's hand-held camera as it bounces through the murky, red-lit caverns of a nightclub called -- I kid you not -- the Rectum.

After an utterly incomprehensible prologue, which apparently involves a character from Noé's previous film, "I Stand Alone," we actually begin outside the Rectum, in what might be called the moment of withdrawal. One man is being carried away in an ambulance, while another is taken away by police. But our central topic is never far away. Some men on the sidewalk apparently hold a grudge against the arrested man, whose name, we will learn, is Pierre (Albert Dupontel), and they taunt him as he leaves. He'll be raped in prison, they jeer, and without the use of condoms or lubricant, either -- he'll surely have AIDS before long.

What has Pierre done? Amid the Stygian gloom and vomitous camerawork of the Rectum scene, it's pretty hard to tell. (Although "Irreversible" wouldn't qualify as a Dogma film, Noé shoots in long, minimally edited takes using only available light.) This is more a homophobic nightmare of what a gay sex club might be like than a realistic portrait; what with the pumping industrial music, the posing Tom of Finland musclemen, the amyl nitrate capsules and the hairy dudes in harnesses begging to be fist-fucked, it's probably what Jerry Falwell dreams about when he's alone in the john. Pierre's friend Marcus (Vincent Cassel), who will later end up in the ambulance, has gone in there, fueled by demented animal rage, in search of a thug called Le Tenia (Jo Prestia), which means "the Tapeworm." Pierre has reluctantly gone after him and rescued Marcus from being raped by viciously bashing a man's head in (it isn't Le Tenia, a fact that's easy to miss) with a fire extinguisher.

In a medium-long career of watching lewd, crude and violent movies, I'm not sure I've ever sat through a scene that was harder to take on so many levels. Noé has said that his ambition was to make a film more violent than Sam Peckinpah's "Straw Dogs" and Pier Paolo Pasolini's notorious "Salò" combined. Although I'm unwilling to do a careful comparative study, he may well have succeeded. If you think that's a worthy ambition, fine. To my taste it's the kind of juvenile, pseudo-intellectual nihilism that usually accompanies bong hits, black T-shirts for bands that suck and repeated viewings of the "Faces of Death" videos.

As the narrative rewinds, we learn that Marcus, apparently coked and liquored up, has been tearing around Paris, terrorizing innocent cab drivers and transvestites in his quest to find Le Tenia, who has apparently raped Marcus' girlfriend Alex (Monica Bellucci). By the time we see Alex leaving a raucous party alone earlier in the evening, a unique atmosphere of dread has been established: We know something terrible is about to happen to her but we don't know the details.

There's no doubt the scene that follows is both challenging and memorable; I suppose it's a masterpiece of its kind. Alex lingers on the sidewalk of a busy boulevard for a few seconds, looking for a break in the traffic that might allow her to cross. This is a distillation of one of the movie's main themes: that at virtually any point a different decision, no matter how insignificant it might seem in itself, could have averted the calamity or at least mitigated it. But Alex doesn't cross the street. Told by a nearby woman, probably a streetwalker, to use the pedestrian underpass, she descends into a filthy tunnel with red walls (!). She's most of the way across when Le Tenia abruptly appears, dragging a different prostitute into the tunnel to slap her -- or him, actually -- around.

Rather than hurrying past, Alex pauses, horrified by this sudden eruption of violence. It's her final mistake. Intrigued by this stranger, Le Tenia lets the hooker go and turns his attention to Alex. The camera gets within two or three yards of them and remains motionless for the rest of the scene. We watch them head-on as Le Tenia mocks and teases Alex, then forces her down to the pavement and rapes her from behind, taking his time while she screams and resists, and then beats her ruthlessly when she tries to escape after he has finished. It's just nine minutes, but it feels like an hour, or a year. It was enough time for me to think about my life and wonder how I wound up as the kind of middle-aged ex-bohemian who would go to see a movie like this on purpose.

This twisting of the knife, this desire to engage our sympathies and desires and then subvert them, is at the heart of "Irreversible," in much the same way that anal sex, from the perspective of mainstream heterosexuality, might be understood as a disturbing but seductive perversion of "normal" intercourse. Another Sight & Sound critic, Leslie Felperin, offered a far more complicated and, I think, more honest response to the "Irreversible" rape scene. She discussed the fact that many women occasionally fantasize about being sexually dominated or even raped, and admitted that the scene's "seductive ambiguity" provoked from her "a certain sado-masochistic engagement."

I think that's exactly right; what makes "Irreversible" seem alternately so brilliant and so overwrought is that Noé tries to pull multiple switchbacks of that kind, to implicate us in his sadomasochistic game, in virtually every scene. At first we are repelled and horrified by Marcus and Pierre; then, once we learn what has happened, we take their side and share their desire to mete out retribution. Later still, as we begin to understand the events leading up to the rape and its aftermath, we understand how each of them, through his own carelessness and selfishness, helped set the scene for catastrophe.

Cassel, one of the finest contemporary French actors (and Bellucci's off-screen partner), plays Marcus as an impulsive, charismatic man-boy, not too far from Hugh Grant's "About a Boy" character. His laddish behavior at the party, snorting coke and smooching random chicks in the bathroom, is specifically what propels Alex out into the night alone for her fateful encounter with Le Tenia. Pierre, who used to go out with Alex, is quite different from Marcus but arguably not an improvement. A hangdog, passive-aggressive type, he's constantly trying to drive not-so-subtle wedges between Marcus and Alex, jokingly harassing them to tell him whether Marcus has ever successfully brought her to orgasm (Pierre evidently never could, and you're not surprised).

Inevitably, "Irreversible" will be understood by cinéastes as belonging to a recent tradition of French flicks that offer a nihilistic, arty blend of sex and violence. They might mean Catherine Breillat's "Romance" and Coralie Trinh Thi and Virginie Despentes' neo-porn "Baise-Moi," along with, perhaps, Bruno Dumont's "Humanité," Claire Denis' cannibal allegory "Trouble Every Day" and Noé's earlier film, "I Stand Alone." I suppose there's something to that, but it's the kind of canned analysis that doesn't tell you much, and I see more differences between those movies than similarities. Denis and Dumont are major international film artists, whereas I'm not convinced by Breillat, and "Baise-Moi" is just unwatchable crap. Noé isn't a kid (he'll turn 40 this year) but he's still young as a filmmaker; he may yet learn to control his desire to sear the audience's eyes out with a red-hot poker before he's even started telling a story.

Some of the viewers who walk out on "Irreversible," or who never go in the first place, would find the later/earlier sections of the film, before Marcus and Alex meet Pierre and go to the party, surprisingly lighthearted and affecting. Still, the symbolism never quits: Marcus wants to have anal sex (but doesn't insist) and during a nap Alex dreams of being in a red tunnel that then breaks in two. But we watch these carefree, leisurely scenes -- they horse around and make love, Alex takes a shower and regards herself gravely in the mirror -- not with foreboding but with a kind of joy. Everything has been undone, everything has been forgiven. Noé has fucked us up the ass and made us like it.