HBO Films' "Normal" is supposedly a pro-tolerance paean about a marriage that survives a sex change. So why does it make us root for divorce? 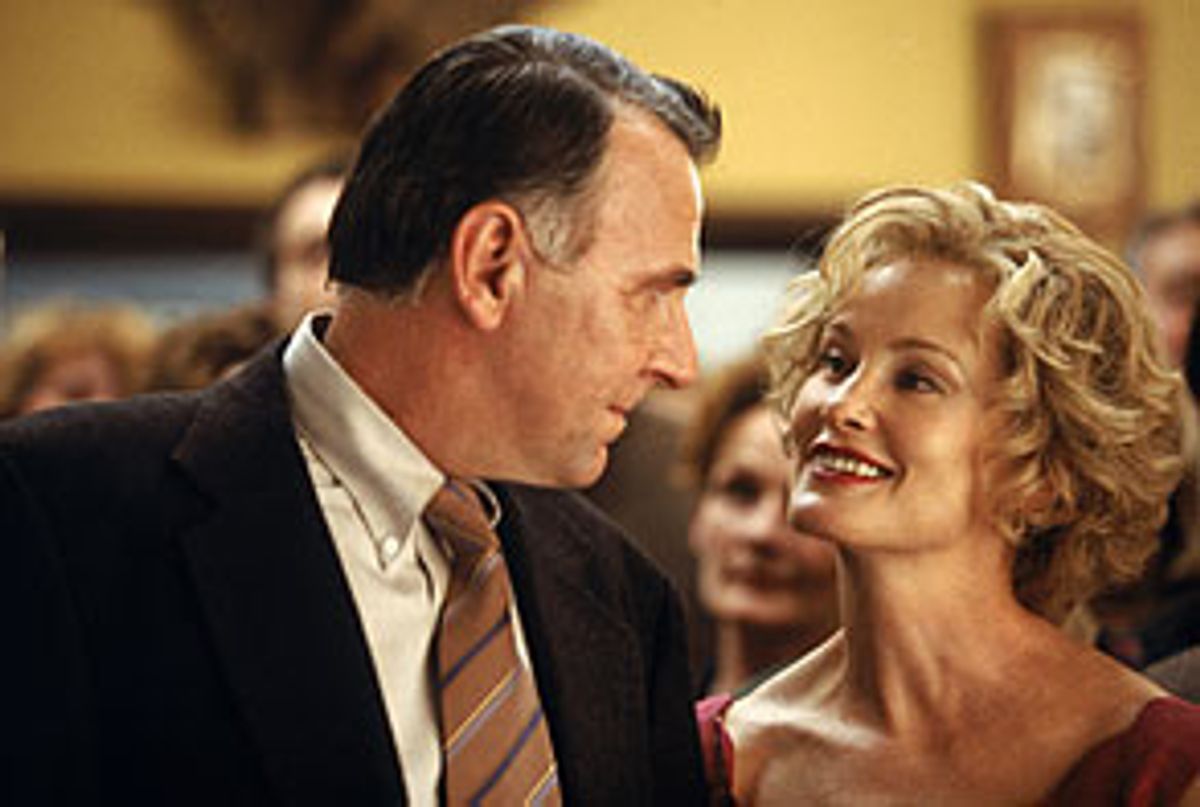 About one hour into the film "Normal" -- the story of Roy, a Midwestern husband and father who decides he should have been born female -- there is a scene that feels completely genuine. Irma, the suffering spouse portrayed by Jessica Lange, is perched nervously on the bed, waiting to see her husband garbed in women's clothes for the first time. When Roy ("In the Bedroom's" Tom Wilkinson) finally emerges from the bathroom, the camera settles on Irma, whose anxiety visibly melts into wary bemusement. "You look like my aunt Norma after her stroke," she smirks. "Do I look that awful?" he sighs. "Yes, honey," she giggles, "you do."

The honesty of the moment soon fades. Irma, the whispery wife with an "oh dear me" sensibility, begins to dole out sartorial advice with all the aplomb of a seasoned drag queen. Patty Ann (Hayden Panettiere), their teenage daughter, knocks at the door, presciently yelling, "Is Daddy in drag?" And Roy, sulking over his wife's insensitive if understandable reaction, begins to undress, revealing a slip, bra and, um, boxer shorts. A transsexual wearing boxer shorts?

That's also the point at which my father -- herself once a Midwestern husband and father who decided that she should have been born female -- finally threatened to hurl the TV through the window, and I can't say I blame her.

This film, adapted by writer/director Jane Anderson from her play "Looking for Normal," could have been the story of our lives. Well, it could have been if my father was a humorless head case with anger management issues; if my mother was a tremulous steel magnolia for whom sexual orientation was but a minor hurdle en route to a happy ending; and if I was a preternaturally mature middle schooler with a metaphorically convenient penchant for dressing in men's clothes.

But "Normal" is a fundamentally dishonest film, making the average Lifetime movie look profoundly nuanced in comparison. It's virtually implausible on a medical, psychological and even geographic level. And most egregiously, it professes to be a beacon of tolerance and acceptance (last week, it was being promoted at gay and lesbian centers around the country) while presenting what might be the most negative film image of a transsexual since Buffalo Bill skinned women for secondhand clothes in "The Silence of the Lambs." (Hey, at least that one owned up to being a horror movie; this flick is going to vie for GLAAD Media Awards.)

"Normal" is set in rural Illinois-by-way-of-Hollywood, a place in which people hang crocheted aphorisms on the walls, and eat nothing but casseroles. It's that kind of eensy Midwestern town in which everyone knows everyone, and folksy neighborliness is a cover for what is inevitably revealed to be small-minded bigotry.

This is the phony setting where Irma and Roy have just celebrated their 25th wedding anniversary, at a party marred by Roy's collapse and subsequent complaints of "terrible headaches." Before he's taken so much as an Excedrin, however, the ostensible reason for his fall is made clear: Wilkinson's Roy -- whose most discernible character traits are self-righteous vapidity worthy of George W. Bush and the hulking gait of Barney Gumble -- confesses to both pastor and wife that he was "born in the wrong body" and would "rather die" than live as a man.

Roy is certain, despite his apparent lack of psychological counseling, support groups or education, that he needs to be a woman immediately. And so, within mere days of revealing a secret he's kept totally hush-hush for 60-odd years, he wears perfume to his job at the tractor factory. He's going to be a woman, he announces to his boss and coverall-clad co-workers, with less trepidation than one might announce a plan to get a new haircut, blissfully unaware that transsexuals across the country have been fired after just this sort of confession.

Unsurprisingly, Roy goes from pillar to pariah in about 15 minutes flat, which should make him at least the object of viewers' sympathies. He is snubbed by omniscient cashiers who know intuitively that he's buying women's clothes for himself, and not his wife. He is banished from his Baptist congregation -- in fact, they hate him so much that they refuse his collection money. But it's difficult to sympathize with Roy and support him in his efforts because his journey from male to female in no way seems real.

Even after he comes out, Wilkinson gives few physical indicators that Roy is transsexual -- except, bizarrely, the tendency to purse his lips prudishly like Vicki Lawrence playing Mama. And, except for an out-of-nowhere scene wherein he just so happens to find a loaded shotgun in a barn and threatens to blow his brains out, he seems rather unfazed by the entire transition. He seems, as my father pointed out, not a genuinely gender-conflicted person, but a mentally ill man in need of professional intervention.

In the real world, according to the Harry Benjamin protocol (the accepted standards of care for gender dysphoria), that's probably what he would get. Typically, a transsexual has to live as a woman for one year and undergo extensive psychological testing prior to being approved for surgery. But in this movie, Roy is on the fast track to sex reassignment within less than a year, an unlikely timeline unless he plans to employ disreputable doctors and take black- market hormones. Roy (now Ruth) starts taking estrogen, which, almost overnight, gives her swelling breasts and, as one character sensitively points out, makes her a real "bitch." (It's also implied that full facial electrolysis has taken no more than a few months even though it typically takes years and Wilkinson's 5 o'clock shadow is unaltered from opening to closing credits.)

Ruth's transition is unintentionally comical. In one whimsical scene, Lange, Wilkinson and Panettiere all shriek at each other like the criminally insane while making breakfast -- because, you know, it's that time of the month. In another, the hormones make Ruth, a factory worker, nearly unable to open a jar; after wrenching it open, she stares in despair at her hands as though they've been scarred with battery acid. By the time she gives away her power tools -- because women don't need to fix things, silly! -- you're ready to call the National Organization for Women.

But all of these narrative leaps in logic, sexist assumptions and factual shortcuts are minor compared to the emotional manipulations of the film. When Wayne, Ruth and Irma's estranged son (John Sikora), calls Daddy a bad word, Ruth punches him in the nose. Charmingly, the violence -- clearly viewed by Anderson as a lesser evil than calling your dad a cunt -- reconciles the father and son. The movie doesn't do much better with the marriage between Irma and Roy/Ruth, which is supposedly the main point of the film. No matter how many times Lange weeps, screams and adopts that stoic-yet-vulnerable stance she's perfected in the course of playing so many farm wives over the years, it's impossible to believe in this relationship, which exists solely to debate the meaning of gender in a marriage. There's no humor, friendship, romance or just plain warmth. When she returns to bed with Ruth, it's supposed to be an example of how love triumphs over all, but it feels like an abdication: Ruth gains her sexual identity at the expense of Irma's. That's not to say that there aren't lots of couples who stay together after a gender change, but the movie seems to imply that sexual acceptance is the only way to express unconditional love -- a premise that many former spouses of transsexuals, my mother included, might argue.

My father is not Every Tran, any more than Tom Wilkinson's Ruth should be. But "Normal" goes beyond merely being unrepresentative to being downright misleading. The film completely avoids the true complexities of how a father's sex change affects a family. Anderson avoids the gigantic issue of what the kids are going to call Dad now, for example, or even what pronoun will be used (interestingly, HBO press materials, while touting the film's social conscience, consistently employ "he"). There's no discussion of how losing a father and husband -- even if only in the physically superficial sense -- is a true loss, nor how altering the conception of one's family from standard American issue to "nontraditional" is a culturally challenging one.

These are issues that dogged me for a significant portion of my life -- and that's true of every family I've ever met who's confronted this issue. They occupy not a frame of this two-hour film.

"Normal," ironically, was also the name of a book about transgendered people by Amy Bloom that was released last fall. It's a winking title that, if applied to a creative project about other minorities, like gay men or African-American women, would seem patronizing and thoroughly retrograde. But in the transgender community, so used to full-throttle vilification, even weak pleas for tolerance are welcomed with overwhelming gratitude. This movie, however well-intentioned, should not be greeted with the same.