Bush, shame and the Dixie Chicks

The arch-conservative country music biz forced Natalie Maines to apologize to the president. But for a moment she was the bravest American entertainer. 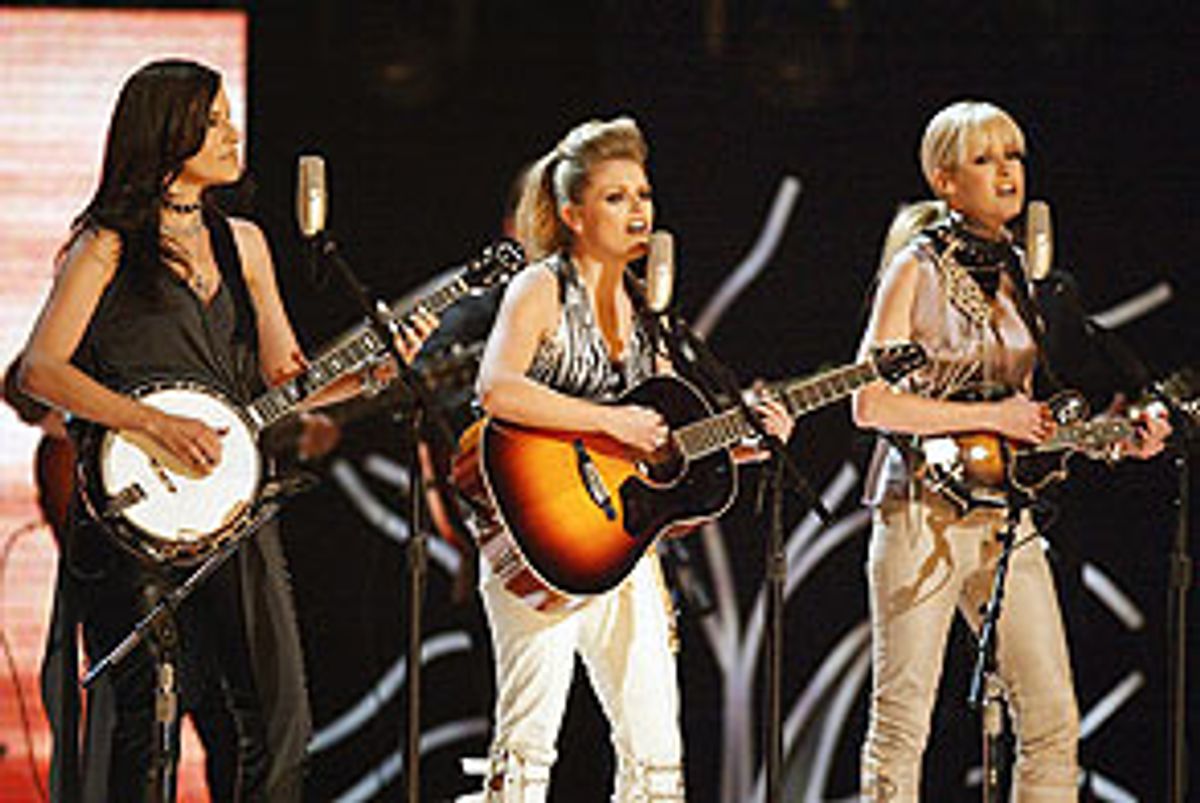 It's common knowledge how conservative the country music industry is: The bulk (though not all) of country music is about home and hearth and heartache, and particularly given how flat sales of recorded music are these days, the industry has a lot riding on that image. Toby Keith, whose hit "Courtesy of the Red, White and Blue (the Angry American)" is suitably, fulsomely flag-waving, must be the golden boy of the country establishment right about now.

So what on earth are they going to do with a willful kid like Natalie Maines of the Dixie Chicks? Maines, a native of Lubbock, Texas, got herself into trouble last week when she told a London audience, "Just so you know, we're ashamed the president of the United States is from Texas." The London papers barely blinked an eye, but the American media caught on fast. A Nashville radio station was deluged with phone calls on Thursday, some of those callers demanding a boycott of the Dixie Chicks' music. Two radio stations in Dallas reportedly stopped playing Dixie Chicks' music -- for that day, at least. (The group's latest LP, "Home," took three Grammys last month and has been lodged firmly in the No. 1 slot on the Billboard country charts for the past 28 weeks.)

Maines didn't even rush to clean up the damage. "I feel the president is ignoring the opinion of many in the U.S. and alienating the rest of the world," she said on Thursday. "My comments were made in frustration, and one of the privileges of being an American is you are free to voice your own point of view."

Apparently that's not a privilege afforded to Grammy-winning singers with top-10 records. By Friday the suits at Sony, the group's record label, must have gotten to Maines. In a "Manchurian Candidate" style "I hear and I obey" statement -- the sort of thing you might hear from someone with electrodes affixed to her temples -- she said, "As a concerned American citizen, I apologize to President Bush because my remark was disrespectful. I feel that whoever holds that office should be treated with the utmost respect."

You could criticize Maines for backing down, and there may be plenty on the left who'd just as soon do that as give her credit for speaking up in the first place. And I'm sure there are people out there who feel it's ridiculous that a singer should step out of bounds to make a political statement at all. Sure, you'd expect it from Elvis Costello, who, as a guest host on the David Letterman show last week, performed a very pointed version of "(What's So Funny 'Bout) Peace, Love and Understanding."

But entertainers in the mainstream, the common wisdom goes, must never dare to do anything but entertain. Other than making pleasantly ambiguous statements like, "Let's all hope for peace" (would that be before or after we kick Iraq's ass?), it's best for any artist who hopes to hang onto one of those precious ancient documents called a recording contract to keep mum.

Which is exactly why Maines' comment -- one she made, incidentally, in a country whose citizens are suffering a collective crisis of conscience thanks to events our president set in motion -- stands as the boldest thing anyone in the entertainment industry has said since the war flap began. It's not simply what she said, but the words she chose. I keep circling back to her startlingly succinct choice of words: She used the word ashamed. She didn't say, "We have complicated feelings about the war" or "We hope the war will not happen" or "May peace prevail" (Costello's signoff during his Letterman broadcast).

Maines' statement wasn't about hope, that most steadfast of country values, at all. It was about shame -- and who, particularly in the entertainment industry, ever uses so strong a word? Against the ongoing blanding out of America, a massive country star actually had the guts, for a moment, to say exactly what she thinks.

Because the Dixie Chicks are huge mainstream stars, they're expected to hold mainstream, down-home, Middle American values. (In so vast a country, where, exactly, is the middle?) Criticism of the president surely doesn't fit into that scheme. And of course, by extension, Maines and the other Chicks must be against not just the president but the troops getting ready to fight. Why else would a few hundred protesters in Bossier City, La., gather to run over a heap of Dixie Chicks CDs with a 33,000-pound tractor, as they did yesterday. The tractor activists said they were supporters of President Bush and of nearby Barksdale Air Force Base.

If it takes a tractor to make your point, so be it. But you have to wonder: Have the Bossier City protesters actually listened to the Dixie Chicks' "Travelin' Soldier" (currently the nation's No. 1 country song)? The song, written by Bruce Robison, is about a Vietnam soldier who doesn't come back. You couldn't find a song that's more sensitive not just to the men who actually have to fight wars, but to the people at home who suffer as they wait for them.

Country music, despite what its detractors will tell you, is filled with nuance. But unfortunately, some of country's most steadfast fans are also the very people who'd kill what's great about it: These are people who can't be bothered to listen between the notes of "Travelin' Soldier" -- particularly when it's Toby Keith who's spelling out what they really want to hear.

Singers aren't always witty pundits or great thinkers. But I believe that, perhaps because they're so used to using words in very specific ways, they sometimes have a knack for cutting to the core of our most unspeakable thoughts and feelings.

Maybe the American left would think more of Maines (if they think of her at all) if she hadn't backed down and offered that apology. But by speaking out so spontaneously, and by saying words that hadn't been mulled over or chewed over or processed to the point of meaning nothing, Maines took a step that few other contemporary country singers would have dared to. It doesn't matter at all whether she did so out of naiveté. And what's so naive, anyway, about thinking that as an American she should be free to speak her mind? The tradition of making incendiary statements generally belongs to rock 'n' rollers, but as Maines knows by now, there's always a price to pay for saying what you really think. The Beatles were bigger than Jesus. It was coming right out and saying it that got John Lennon into trouble.