In the criminal justice system, if anything can go wrong, it will. In the TV ratings system, all three hit "Law & Order" shows can't go wrong. Meanwhile, a nation of addicts suffer in silence, untreated! 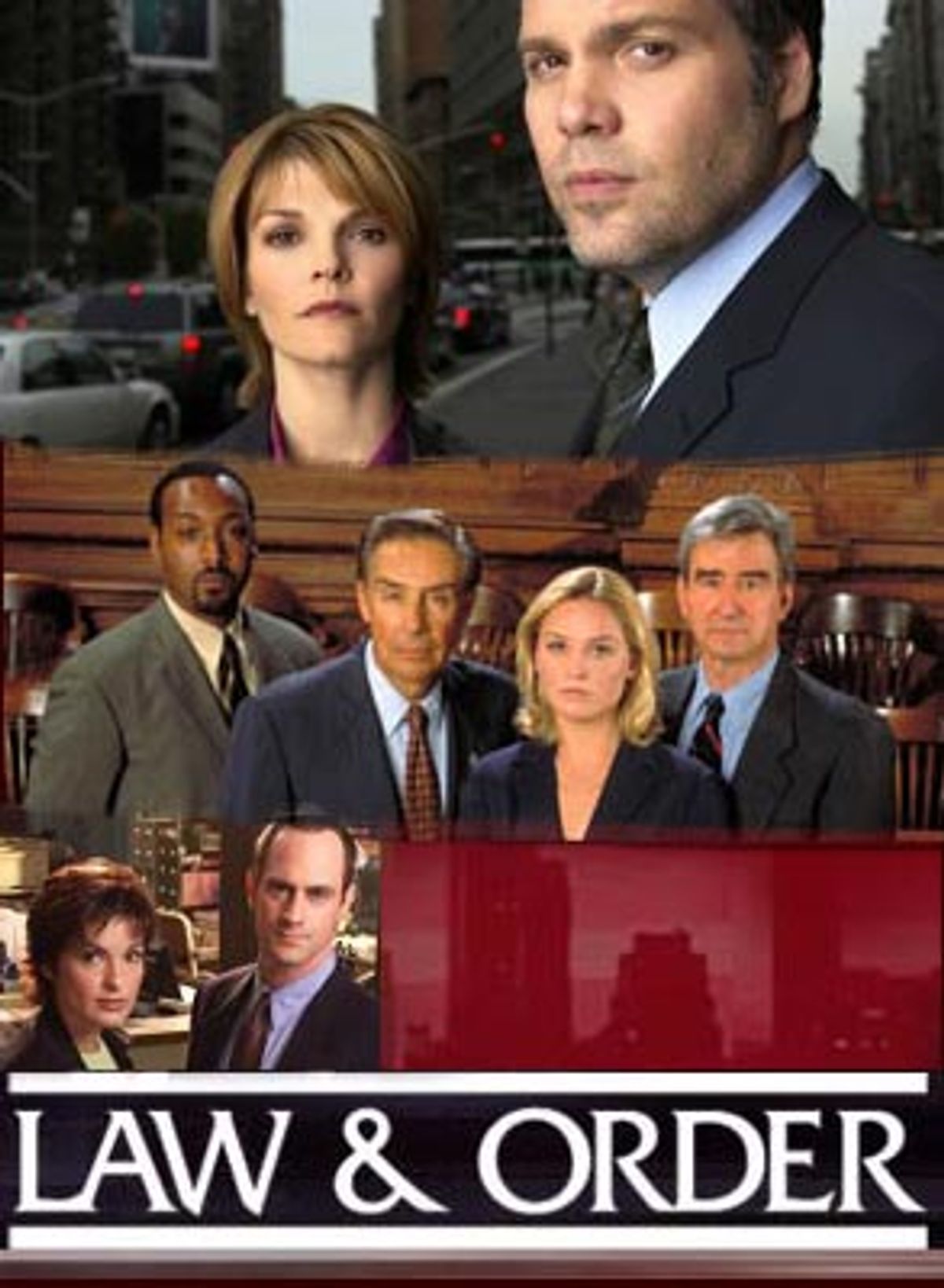 "Law & Order" is always on. Find the remote right now and see for yourself. Between NBC, TNT and USA, including "Law & Order" and its two spinoffs, you could watch 26 hours of "Law & Order" this week alone, if you felt like it.

Just look around you. All three shows are in the top 20 for the season in total viewers, and each show is dominating its regular competition among viewers ages 18-49. A conservative estimate is that 88 million viewers watch "Law & Order" and its spinoffs and reruns each week. That's 30 percent of the United States population, which means that 3 out of every 10 people you see have watched the show in the past week.

By piecing together anecdotal evidence, though, a more shocking picture emerges: It's more likely that one out of every 10 people you see watched a whopping three episodes of "Law & Order" this week. Indeed, "Law & Order" may be the silent scourge of our cities, its crippling addiction afflicting couch potatoes from all walks of life.

I had a roommate whose addiction almost destroyed him. Every night when I came home, there he was, bong in hand, "Law & Order" rerun on the TV. I tried to confront him about this very serious problem, but minutes later I'd find myself glued to the couch, unable to leave without finding out whether the creepy activist or the defensive grad student was responsible for the popular professor's death.

Five years later, I thought I had shaken the "Law & Order" bug, only to find myself living with a man who would end up watching the show every time he picked up the remote. Despite my complaints, he once spent an entire Thanksgiving weekend tuned in to one of those "Law & Order" marathons on TNT. As I tried desperately to entertain his mother by chatting and playing Scrabble, there he sat in the same room, headphones plugged into the TV, watching his fifth "Law & Order" of the day.

In the past few days, I myself have fallen prey to this hideous harlot of criminal justice. Figuring I'd watch one hour each of "Law & Order" and its two spinoffs to prepare for this piece, I regained consciousness nine hours later, dazed from commingling with snarky detectives, thick-headed from pondering unforeseen investigative twists and still anxious to find out whether or not the arrogant businessman had really been molesting his children. I tried to will myself to fast forward to the end of the episode and call it a day, but as the scenes sped by, my curiosity over the emerging details of the case overtook me, and I had to rewind and watch the rest of the episode in its entirety.

Afterwards, I wanted to hurl myself over the nearest cliff.

But stories like mine are just the tip of the iceberg. What creates this relentless addiction to "Law & Order," and how can we stomp it out? More importantly, do we really want to?

Creator Dick Wolf controls our weak little minds with all the tools you'd expect, primarily great casting and excellent writing. The show's plots are remarkably unpredictable, given how long it's been on the air (13 years) and how obvious the story lines of most other cop shows are. The snappy dialogue is witty and intelligent, with pop-cultural references squeezed in between important bits of information. "They kill abortionists, don't they?" Jerry Orbach quips to Jesse Martin during one investigation. "So that's how a brain looks on embalming fluid," Jamey Sheridan remarks after coming across a spaced-out stoner who dips his joints in formaldehyde.

Unlike soapier shows, "Law & Order" doesn't focus on the personal lives of its detectives, lawyers and judges at all. As a result, you can pick up in the middle of the season without feeling like you're missing anything. This also explains the show's success in syndication -- tune in for any episode of "Law & Order," new or old, and one show feels just as immediate and interesting as the next.

While little is revealed about the show's main cast of characters, we learn a great deal about the witnesses and suspects we meet along the way, all within a few seconds of encountering them. "My wife and I were driving back from the Forum in Pennsylvania ..." says the suspect's neighbor. "You guys remember every doughnut you eat?" the telemarketer asks the cops. "She used to call the woman a slut. Of course, she was one," says the old lady down the hall. The show's formula is set in stone: A felony occurs, the cops seek out clues and find them easily, a suspect is identified, obstacles arise and injustice usually prevails. Yet every scene has a life of its own, thanks to the writers' devotion to breathing life into each character, no matter how small and insignificant.

Not only does this strengthen the show's nonlinear "pick any episode" appeal, it may also explain why it's possible to start watching in the middle of most episodes and still get caught up in the action within minutes.

Of course, pinpointing the guilty party at the earliest possible moment is the main challenge -- and draw -- for "Law & Order" addicts. Once you learn the show's vocabulary of unpredictable twists and turns, it becomes much easier to identify the criminal. Outspoken, angry suspects with extremely bad attitudes usually aren't guilty, unless they're very arrogant, rich and/or powerful, or they're members of extremist religious sects or radical political groups. Slightly creepy but quiet suspects with no apparent link to the crime, or victims who are especially emotional and self-pitying who appear early on are the best candidates for guilt. Politicians, doctors, men who cheat on their wives, mothers who insult their children and embittered grad students are also, typically, guilty.

While you may come across a few cheating men and sleazy politicians per episode, there's a look of restrained fear common among the guilty that becomes easier and easier to spot the more you watch the show. The crazy thing is, the better you get at predicting who's guilty, the more you want to watch. Addiction is a curious foe, indeed.

Unlike most TV actors, D'Onofrio dares to be extremely weird. He's sneaky, playing the naive witness in order to mention inadmissible evidence on the stand, and spilling coffee on his notes on purpose to catch his suspect off guard. He smiles at inappropriate moments. He delights in toying with arrogant men, but goes out of his way to be sensitive to old ladies and children. Just when he's starting to show a little swagger, he leaps out the door, blurting, "I need to use my most important investigative tool: my library card!"

And despite the breakneck pace of the series, D'Onofrio takes up long blocks of screen time by just ... thinking. He pauses, mid-sentence. He looks around the room. He screws up his face. The camera zooms in. What can he possibly be pondering? Unlike the other two shows, on "Law & Order: CI" we already know who committed the crime. Somehow, the fun comes from watching D'Onofrio manipulate his way to truth.

The weakest of the trio is undoubtedly "Law & Order: Special Victims Unit," a show so melodramatic and sensational that it's clearly the "Baywatch Nights" of the franchise. The creators insist that the show isn't gratuitously violent or salacious, despite offering up scenarios like a young boy who witnesses his stepmother being beaten to a bloody pulp, or a teenage girl who stands in the hallway of the precinct, screaming, "He raped me, mother! I was 12 years old! Where were you? Why didn't you help me?" Then, of course, there's the mother, whose lines are as subtle as the chorus in a Greek tragedy: "How do I make sense of this? My husband is dead, killed by my own child's hand! How awful it must have been for my husband!"

Based on his track record, there's no doubt that Dick Wolf could make everything from credit card fraud to stray dachshunds suspenseful and fun to watch. But it's up to each of us to resist the siren call of new "Law & Order" spinoffs, before the inevitable "Law & Order Channel" emerges and draws us into a black hole of murderous womanizers, high-minded but world-weary prosecutors, and snarky, unstable detectives.