The mother of all gambles

Looking to figure out whether Saddam is alive or dead? Go online and check the betting line. 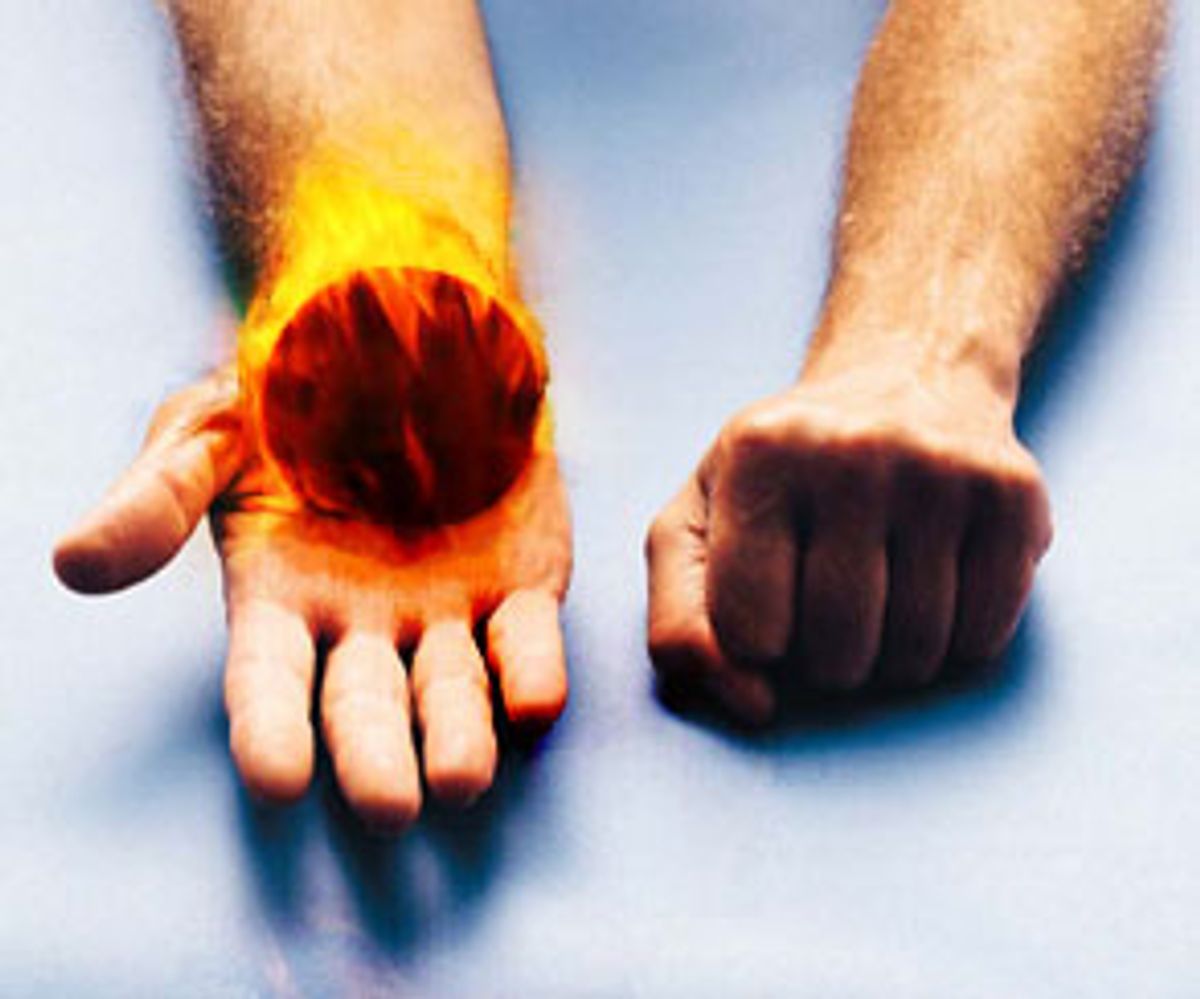 Bad odds for the year ahead. According to Internet bookies BETonSPORTS.com, it's 20 to 1 that terrorists will storm the U.S. embassy in Pakistan by Christmas and 10 to 1 that Osama bin Laden will be strutting around the compound in the aftermath. There's a 5 to 1 chance that by year's end the U.S. will launch a military strike against North Korea, which by then will likely have tested an ICBM (2 to 1 odds) and then a nuclear-capable missile (1.5 to 1), or launched a nuclear attack on a neighboring nation (3 to 1).

Great. Put me down for $20 on everything, and pass the cyanide pills.

BETonSPORTS, based in Costa Rica, is one of several offshore gambling sites -- illegal in the United States -- that for years have booked bets on sports and finance, crude oil and currency, Oscar nominees and celebrity trials and where the next big earthquake will hit. Now, in the "shock and awe" dawn of global American preemptive war, the e-bookies see profits in the wages of empire.

Iraq, of course, is the current mother of gambles, and in the monthslong run-up to what everyone knew was an inevitable invasion, the wagering has been continuous and heavy, the odds fluctuating in often wild arcs. At TradeSports.com, out of Dublin, Ireland, bettors have staked almost $1 million on the fate of Saddam Hussein. TradeSports CEO John Delaney tells me that Iraq-related betting, which opened on Sept. 24, is outdone only by the site's bid line on college basketball's March Madness.

TradeSports.com and BETonSPORTS function exactly like futures markets: Traders swap bets against each other, bidding up contracts to beat each other out of the profit. But what makes the bets on war more than just morbidity is that, according to academics who have studied them, these "betting markets" are phenomenally accurate predictors of not simply where markets are going, but where the world is going.

So who needs CNN for determining whether Saddam is dead or not? Just follow the betting line. There are four Saddam bets currently available at TradeSports: The basic bet is that he will be out of power -- not necessarily beheaded or charred or shot to pieces, but simply ex-president of Iraq -- by the end of March, April, May or June. The percentage-point probabilities increase vastly as spring heads into summer.

In the hour after President Bush's 10:15 EST war "declaration" Wednesday night, the Saddam-gone-by-March bet shot up nearly 10 percentage points -- the odds went from about 60 to 69 percent -- but by next morning had dropped back down to 60. In the five days since Bush traveled to the Azores to declare diplomacy dead and "the moment of truth" was upon us, Saddam "securities" have risen a total of 40 percent. An interesting ride, but not as thrilling as the one-day 14-point increase following Bush's March 6 prime-time news conference that rhetorically sealed the nail in Saddam's coffin (or the double-digit drop following the massive antiwar demonstrations worldwide on Feb. 15).

The gone-by-April bet, meanwhile, has hovered steadily in the low 90s, and in the wake of Wednesday's opening salvo, May and June rose to 95 percent. If Saddam is indeed ousted by the end of March -- 10 days from now -- a $100 bet at 60 percent odds pays $40 in profit. If the evil one manages to hold on past April Fool's Day, then you've just lost $60. So root for the home team. The Osama bin Laden contract is less certain: a 46 percent chance he's "neutralized" by June, but that number has been rising in the hours since the war on Iraq began.

CEO Delaney, a veteran of the investment industry, refers to TradeSports' bets as "contracts," which at first sounds disingenuous -- yeah, sure, a "contract," and if I blow five grand on it, henceforth this is known as a "bad contract" -- but he's got a point, principally in answer to those who would criticize "war booking" as somehow too grim, too mercenary, too much in bad taste. Balls, says Delaney.

"We'd ask everybody to consider that when the New York Stock Exchange opens this morning, they're not going to delist Boeing or Lockheed or any of the defense stocks because the war in Iraq has begun. When the petroleum exchanges open, they're not going to stop listing oil contracts. People will trade relevant contracts based on the information that's available. The Saddam contract is just another relevant contract. This is a service business. You keep using the word 'bet,' and though I'm not one to be sensitive about that, let me just make a small point: At TradeSports, you can trade financial products, like crude oil. If the Saddam Hussein contract is highly correlated with the oil contract -- which it is -- and we have traders trading oil contracts, why is one betting and the other trading?"

One mocking Web site that offers its own "Baghdad Bonanza" war gambling exercise obliquely asks the same question. "Blood for oil? You bet!" exhorts MarchtoWar.com, co-founded by 32-year-old Tad Hirsch, a grad student at MIT's Media Lab. Send in $5, pick the war's start time down to the date, hour and minute, and win 20 percent of the kitty in the form of pre-paid gasoline cards; the rest will go to humanitarian groups that hope to clean up the mess in postwar Iraq, likely the Red Cross or Save the Children.

"Why give away gasoline?" MarchtoWar asks. "Simply put, we love gas. We love big cars, we love 80-degree homes, and we love all manner of plastics. We love gas enough to rip up the Alaskan wilderness, and to send our sons and daughters halfway around the world to 'rehabilitate' Iraq's oil supply. What better way to celebrate the beginning of the coming war than by burning a gallon of free gasoline?"

Launched on Feb. 25, the site was inundated with 10,000 unique hits in the first 24 hours of operation. Alas, fewer than 400 visitors actually bothered to throw a wager, bringing the pot to a measly two grand. "We wanted to do better than a bake sale," shrugs Hirsch. "And we did -- we did it by tapping into this fundamental American activity of wagering and gambling, something we all understand, something we revel in. I mean, what is the stock market? What is the futures market?" (At press time, Hirsch said the site had a winner, but he hadn't contacted him yet.)

Political analysts have long noted how gambling odds make for better prophecy than opinion polls. Since 1988 political scientists at the University of Iowa have run a betting market on American politics, called Iowa Electronic Markets, or IEM, which regularly outperforms professional pollsters by pricing futures as the vote percentage bettors expect a candidate to take home. In the last four presidential contests, IEM's market price odds on the eve of election were off by an average of just 1.37 percent -- better than Gallup, which had error margins of between 1.5 and 2 percent.

Betting markets are simply tapping a consensus of the extremely well-informed, says Justin Wolfers, professor of political economy at Stanford Business School. Wolfers teaches a class on the economics of sports betting, and recently completed a six-week study of TradeSports's Saddam contract. The oil correlation was particularly compelling. "On days when the probability of war -- the Saddam Hussein contract -- rose 10 percent, oil prices went up a dollar a barrel. That's kind of obvious. But then we can look at the Saddam futures contract and from that map out the future prices of oil." The immediate impact, which we're now suffering, is a rise of $10 a barrel; by June, the impact will run about $7 a barrel. Wolfers predicts that within 18 months there will be no impact -- as if there had been no war.

"The magic of John [Delaney's] data is that it is so very reliable," Wolfers tells me. The magic behind the reliability, of course, is the expected payout and the feared loss -- the 11,000 bettors at TradeSports.com play the game with the best information available; aggregated, that information is the pooled wisdom of people who've invested in their opinion. "John's got a lot of very sophisticated people trading in his market, who are very smart, who work on Wall Street and in finance in London," says Wolfers. "It's also fair to say that these markets capture the attention of economic and political luminaries in the United States and elsewhere. We could read the New York Times every day to see what's going to happen -- but it's going to be a biased assessment. John's markets are unbiased because they force you to put your money where your mouth is."

We need only surf over to the Web site of the Defense Advanced Research Projects Agency to get an idea of the excitement in government over betting markets. DARPA, the screwball-science arm of the Defense Department, has two ongoing projects "for defining and managing markets to answer specific questions of interest to the DoD," according to the Web site. "Typically these markets will have a small number of invited participants who will bring their information together through the market mechanism. We envision markets of 15 to 20 participants addressing questions about the probabilities of specific kinds of failure within our national infrastructure." Failures, eh? No doubt 9/11 would qualify as a fine recent example. I wonder if the DARPA smart money is on it happening again.