Movie people act all serious while Marines die, the Academy actually provides some surprises (Adrien Brody, anyone?) and Michael Moore pees on the furniture. And Nicole, honey, write a speech, OK? 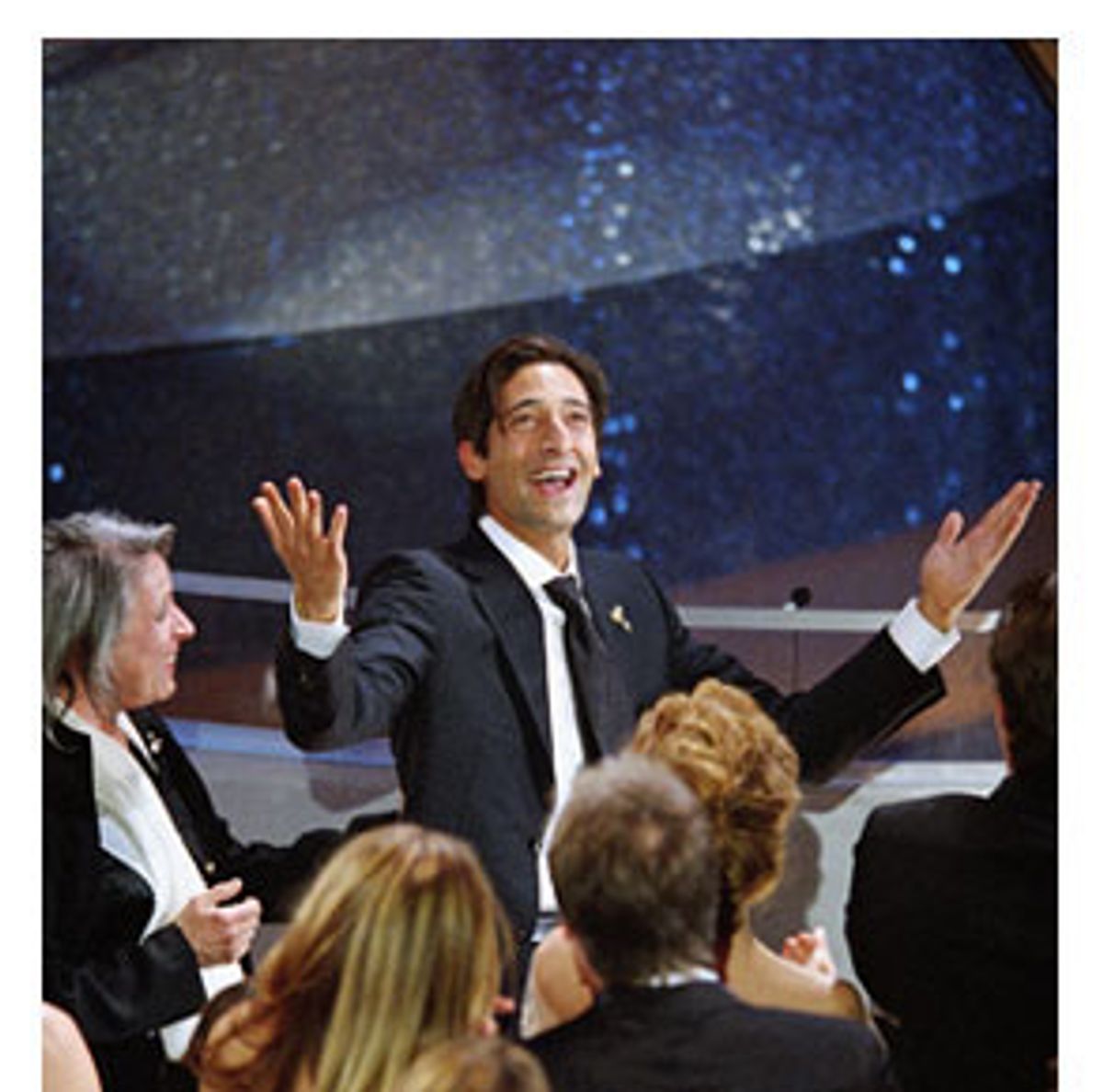 I once heard about a stripper in San Francisco who worked in one of those Talk-to-a-Naked-Girl-in-a-Box things. She would sit on a chair, spread her legs, and conceal her face with a large hardback copy of "Ulysses." Who knew if she was actually reading it? It didn't matter. I'm not really showing you my crotch, I'm reading the world's most difficult and serious literature.

Hollywood looked smart last night with its book-and-crotch act, and the book was Suze Orman's "9 Steps to Opinionated Speaking Without Alienating the Big Money."

Welcome to the Humble, Self-Effacing Oscars! And what better person to deride the landed gentry of the industry from the soft pink insides than wacky old Steve Martin. All the sacred cows, gently nudged. Oh, naughty Steve. Teasing Tom Cruise for being rich. Nicholson referred to as gay, in jest. Mickey Mouse called a "black actor." Oh, ho ho ho. Hey, for the Oscars, and somebody of Steve's age, that stuff is downright "edgy," and chuckles did abound. Steve Martin was pretty funny, and some of the movies this year were pretty good. But nobody was able to justify the existence of the Oscars this year. Oscar shot his self-rationalizing power-wad defending himself after 9/11. Tom Cruise and his napalm-eyed Rent-a-Passion was not around to hypnotize us into submission this year.

There were no more black people to cry tears of overdue praise for. Everybody knew the night was doomed, and they all just wanted to put their pants back on, take their tips and shut the curtain.

But the show must go on, because it was already sponsored by JC Penney and other corporations.

At least JC Penney got all dressed up for the occasion, with its new, Sheryl Crow-esque "I Am Woman, See Me Wear Tiny Dresses" campaign. And the Victoria's Secret ad featured a Bob Dylan number, bringing soulful dignity and depth of thought to bra-and-panty sets. I'm beginning to see a trend brewing with this James Joyce beaver-shot thing. Like when Jennifer Garner's teleprompter script had her referencing Benjamin Disraeli. On the flip side, there was Led Zeppelin shilling for Cadillac, which is sort of like putting the cover from a copy of Hustler over the text of Dale Carnegie's "How to Win Friends and Influence People."

There were a lot of security precautions this year, such as the really, really loud and insistent "Get the Fuck Off the Stage" music, and the wondrous disappearing microphone. Third man on the sound-editing totem pole? "I love you, Deborah!" was the best you could hope for, as the trumpets renounced your welcome and the mike sank into Mordor.

On a happy note, the Academy seemed to smell that everyone in the world expected the wholly expectable, and actually gave out some shockers to some deserving and unlikely candidates. Example No. 1: Best supporting actor Chris Cooper (for "Adaptation"), who is whompingly amazing. I couldn't believe he's the same actor who played the gay Nazi dad in "American Beauty"; what stealth. What alchemical shape-shifting.

Example 2: Michael Moore. I thought he was less likely to get an Oscar this year than O.J. Simpson was. Everybody knew he was going to stink up the room if he won, and, sure enough, he displayed his usual talent for getting kicked out of buildings. It's our night, fat man, said the Academy, and we're not about to be whined at by a guy with cole slaw on his pants. If Moore had been only slightly more graceful and less abrasive, he could have said anything he wanted to; he had the support. But he's just not a pet you can bring in the house. He craves disgrace, he has no self-control. Last night, it wasn't what he was saying that was the problem, but the waddling, honking and gland-spraying with which he said it.

(By the same token, I was surprised to see Susan Sarandon onstage. She looked great, and they didn't even make her wear a rubber ball in her mouth. She's such a lefty I'm surprised both of her eyes haven't traveled over to one side of her head, like a halibut.)

Example 3: Adrien Brody, who succeeded beautifully and effortlessly at rallying the anti-Bush sentiment Michael Moore was trying so sweatily to shove home. And Brody's impromptu molesting of Halle Berry was a phenomenal plus.

Example 4: Roman Polanski, who won the best director award for "The Pianist." OK, it's another Holocaust movie, and there's something kind of icky about that right now, in light of the whole Middle East rat-fuck mess, but whatever. The guy is a felon in exile, and that somehow makes it OK. Don't ask me how; that's a very complicated karmic hat trick, but it all balances out. Talent forgives everything, eventually, even pedophilia and a glut of Holocaust films.

I was unsurprised that Julianne Moore did not win anything. She has made a personal cottage industry out of looking haltingly vulnerable and on the verge of pressing thumbtacks into her veins with that pathetic smile on her face -- that, and being unflinchingly nude.

For this troubled year, I figured she would probably seem a little too controversial. This is wartime, and we've all seen her pubic hair. Not this year, honey.

Thank God Jack Nicholson did not win again. I'm sorry; Jack Nicholson is not an Everyman. I don't think he can adequately represent anyone's life anymore, except maybe Warren Beatty's. He's too louche and unregenerate. Soldiers sometimes get a look of horror frozen on their face from witnessing one too many atrocities; Nicholson's face is frozen in the eternal conquest of young snatch.

Then there was the whole "Chicago" thing.

I was unsurprised that Catherine Zeta-Douglas-Jones won, but not for the right reasons. She did not look surprised, nor did anyone else. Not for nothing did she marry into the Douglas camp, and yesterday was payday. She is nothing if not the prize company brood mare, birthing future company Douglases. And the part was a jewel: What actress doesn't dream of being in a film where she's in jail, but can still wear full hair and makeup?

While Zeta-Jones looked great in "Chicago" -- she's a nice, fulsome size -- looking at Renée Zellweger in a tiny little flapper dress is like looking at Iggy Pop in a tiny little flapper dress, only on Iggy it would at least be subversive, and therefore sexy. I don't want to see all of the divots in a woman's sternum when I am looking down her cleavage. Collarbones should not look like BMX handlebars. Legs, preferably, should lead to an ass. Preferably, somebody singing and dancing should be able to sing and dance. And she can't stop squinting. How the hell did Renée Zellweger get that role?

"Chicago," while fun and basically entertaining, really could have been great if it had been performed by actual pop-music-type people. Imagine the Catherine Zeta-Jones role performed by Madonna, and the Roxie Hart role performed by Christina Aguilera. How slick would that have been? How much better the singing and dancing? How much stronger the commentary on the fleeting nature of fame? Or what if they'd used an all-black cast of Alvin Ailey dancers, and made it a comment on the disproportionate number of black people in jail? As it was, "Chicago" was a lot like watching hammy girls enjoy themselves on karaoke night. The casting for that whole film felt like pact-with-the-devil-company-shit, and the devil, as we all know, is the blobular Harvey Weinstein, who, like the neighborhood mobster, seems to have Hollywood in a painful scrotum-hold. Please, Mr. Weinstein, have mercy ... Give the man his Oscars already, Paulie, for the love of God!

While the prosthetic nose was patently absurd (naturally, there are no homely actresses in the world, certainly none of any ability, no, we must use and uglify one of the world's most coddled beauties) Nicole Kidman, in "The Hours," came off like a very smart woman with superstrong chops and surprisingly candid depth. But she looked like a dreadful bimbo once she got up to take her trophy. Write a speech, ladies. When you don't, you look stupid. Nothing unravels the spell of an exceptional performance faster. "Um ... the world ... is ... in turmoil, and stuff ... and ... uh ... I'd like to thank Miramax ..."

Christ. In one dumb minute, she succeeded in reminding me that she was married to Tom Cruise for 10 years, a fact that I had blissfully forgotten in appreciation of her talent.

Who can get it up to enjoy the Oscars, if the Oscars can't get it up? There's so much cheap sentiment, so much hackery and political confusion. Billy Wilder is dead. Fifteen of our boys died in Iraq and 12 were taken as POWs while Catherine Zeta-Jones sang a duet with Queen Latifah that wasn't even in the film. One could barely ignore the dripping derision when Peter Jennings growled, "Now back to the Academy Awards," after the dismal newsbreak.

It's all about Miramax. Harvey Weinstein is probably producing the whole war. Osama bin Laden is probably hanging out in Palm Beach with Jon Bon Jovi, and Saddam Hussein and Don Rumsfeld probably play Grand Theft Auto III in the craft services tent at the end of every shooting day. For the 76th Oscars, maybe Hollywood will stop trying to accommodate the souring mood of the world and do what they are supposed to do: Wear Harry Winston chandeliers, show their shoes to Joan Rivers, wear push-up bras and Botox and Look Pretty. It's better, when you're ogling a beaver shot, not to have to think too much.