Catholic secret societies, lessons in obscure art history and a gruesome murder in the Louvre! Dan Brown's conspiracy-theory thriller is the pulp must-read of the season. 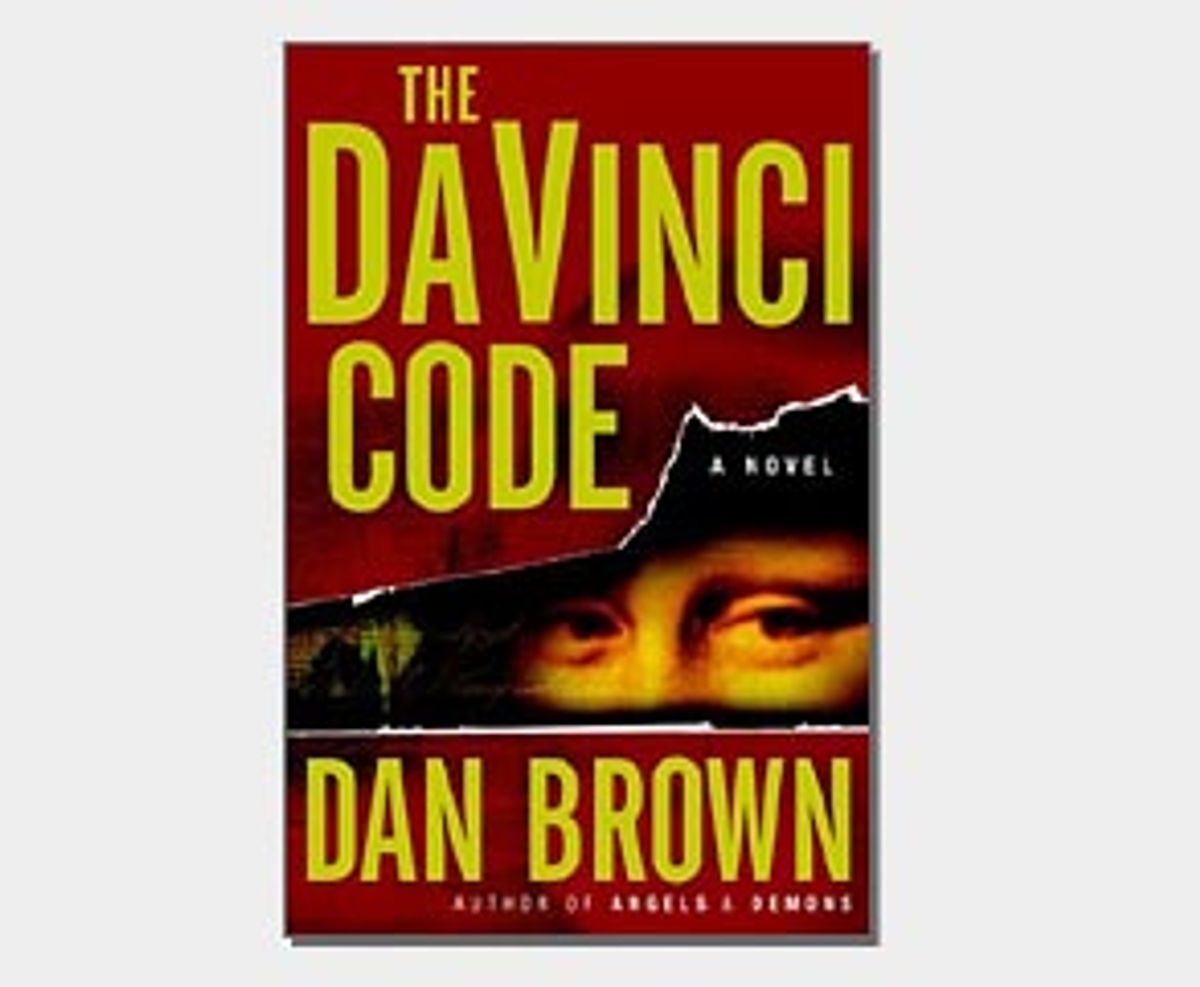 Sometime in the next few weeks, someone you know is going to tell you they've read this fantastic new thriller called "The Da Vinci Code," and before you can stop them they will have launched into a breathless description of the plot. Carried away by the pleasure of reliving each twist and turn, every narrow escape, they'll spill all the book's secrets and stare at you expectantly, as if to say they'll forgive you for leaving them in the lurch and dashing right out to the bookstore to buy it.

When that happens, you should cut them off quickly -- and then dash right out to the bookstore and buy it. Dan Brown's novel is an ingenious mixture of paranoid thriller, art history lesson, chase story, religious symbology lecture and anti-clerical screed, and it's the most fun you can have between the sort of covers that aren't 300-count Egyptian cotton.

If the idea of a mystery that draws on the history of religion and art sounds like the kind of "must read" you've picked up before only to find yourself bored silly (i.e., Umberto Eco's "The Name of the Rose"), let me hasten to reassure you that Brown, for all the facts he throws around, operates squarely in the territory of the pop bestseller. "The Da Vinci Code" doesn't offer the kind of solid descriptive writing you find in the work of the best practitioners of crime fiction. Brown appears to be the kind of writer who hits on a snazzy gimmick and then mines it for all it's worth. And it's one hell of a gimmick.

Brown's hero is Robert Langdon, a Harvard professor of religious symbolism who, after a lecture in Paris, is awakened in his hotel room in the middle of the night by a member of the Police Judiciare. After being spirited away to the Louvre, he finds that the museum's curator, whom he was scheduled to meet with earlier in the evening, is dead of a bullet to the stomach. In the time before his death, the curator has managed to leave a trail of clues, the most visible of which is that he has arranged his body in emulation of Leonardo da Vinci's "The Vitruvian Man." He has also drawn a pentacle on his chest in his own blood, and scrawled another cryptic message -- "O, Draconian devil! Oh, lame saint!" -- beside his body in black-light pen.

No sooner has Langdon begun to unravel the possible meanings of the dead man's clues than he discovers that the grandstanding police captain (whom Brown has given the great name of Bezu Fache) suspects him of the murder. Langdon's temporary salvation comes in the form of Sophie Neveu, a police cryptologist summoned to the scene who knows Langdon is being set up as the fall guy. Their only chance of following the trail left for them is to go on the lam.

If all that sounds insanely complicated, consider that I haven't even mentioned the assassin, an albino giant who is also a devout member of the Catholic secret society Opus Dei. Or that the bishop who heads Opus Dei is summoned to a secret meeting with Vatican officials. Or that, like Leonardo himself (and Botticelli and Isaac Newton and Victor Hugo and Jean Cocteau), the dead curator was a member of another secret society, the Priory of Sion. Or the fact that Sophie Neveu is the dead man's granddaughter.

The fun of "The Da Vinci Code" is that things get even more complicated than that. As in his previous novel, "Angels & Demons" (which also featured Robert Langdon), Brown has written the story in real time. The book is one continuous chase -- by car and plane, from Paris to London and back to Paris -- with Langdon and Sophie in one "Beat the Clock" situation after another, putting their prodigious noggins to work on the coded clues they've been left while staying out of the clutches of Bezu Fache.

That sense of constant forward motion is how Brown manages to disgorge huge chunks of information about history, aesthetics and religious and pagan symbolism without making the book feel like it has stalled in its tracks. (Finding a way to manage that is going to be the biggest challenge for whoever makes the inevitable movie version.) Without giving the game away, I'll just say that Brown has devised a series of situations that allow the two characters to show off their specialized areas of knowledge, coded clues that allude to the history of art and the tension between paganism and the Catholic Church.

At its best, "The Da Vinci Code" is the type of thriller that might have amused that great atheist Luis Buñuel. Langdon is forever discoursing on symbols -- the pentacle, with its connotations of satanic worship, is the best example -- whose real meanings have, he insists, been perverted by the church in an attempt to solidify its power by crushing dissent. Central to Rome's consolidation of power is a suppression of all forms of goddess worship, and a wholesale recasting of pagan iconography in Christian terms.

Part of the fun of conspiracy theories is that they indulge our worst fantasies of the powerful, allowing us to imagine them as the unscrupulous bastards we always suspected they were. And if conspiracy theories have their safe side, offering us a world where everything falls neatly into place, they also promise a weird sort of freedom. Suddenly there are symbols everywhere just waiting to be deciphered, offering revelation to all who can read them. All that we believed fixed is shattered and everything is up for grabs. What could be scarier or more thrilling than that?

"The Da Vinci Code" plays with the gleefully heretical notion that the entirety of Judeo-Christian culture is founded on a misogynist lie, evincing disgust for sex in general and the female body in particular. Brown has a provocateur's talent for using facts as the seasoning in his sinister stew. He writes of Opus Dei's $47 million world headquarters in New York as if he were a Jedi describing the Death Star. There's a bad-boy charge to Brown's relation of the story of the Emperor Constantine's unification of Rome under Christianity.

Jesus' divinity is not, Brown tells us, a sign of God but rather something decided upon by a vote ("a relatively close vote at that," says one character at Constantine's ecumenical gathering, the Council of Nicaea). As for the revealed word of God, well, Brown says, what we know as the Bible was created from Constantine's suppression of all the gospels that related Jesus' human traits. If you know someone who was upset by Martin Scorsese's film "The Last Temptation of Christ," "The Da Vinci Code" should make them fall down frothing at the mouth.

Brown doesn't stop there. He is at his most wicked in a long section explicating Leonardo's "The Last Supper," one of the revered pieces of Christian iconography, which here stands revealed as a two-fingered salute to church doctrine, a pagan critique of the very foundations of Christianity. Boy, is it fun.

But the problem with conspiracy theories is that, in order to keep existing, they need to hover just beyond the reach of exposure. Finally, "The Da Vinci Code" does not have the courage of its anti-clerical provocations. The church has a lot to answer for here, but it's not the book's ultimate villain, and as the story draws to a close you sense Brown backpedaling.

There are other, smaller letdowns. As a character, Langdon doesn't exist as a great deal more than a fount of information. (Brown's invention of a People magazine description of his hero as "Harrison Ford in Harris tweed" feels like a bid to get Ford cast in the movie version -- please, God, no.) And he falls into the danger that always awaits a thriller writer so adept at twists, by supplying so many last-minute surprises he nearly twists the plot into total implausibility.

Finally, though, neither Brown's failure of nerve nor the slight defects of craft are enough to ruin the pleasure of this hugely entertaining book. As a thriller writer, Brown is like a showboat academic, using facts to spin one grand theory after another. It may be an inch deep, but it has the thrill of a terrific performance. I hope Langdon returns in another adventure, one in which his creator goes whole-hog with his craziest heretical impulses. For all the readers who are going to be happily immersed in "The Da Vinci Code," that would be a most fitting act of contrition.