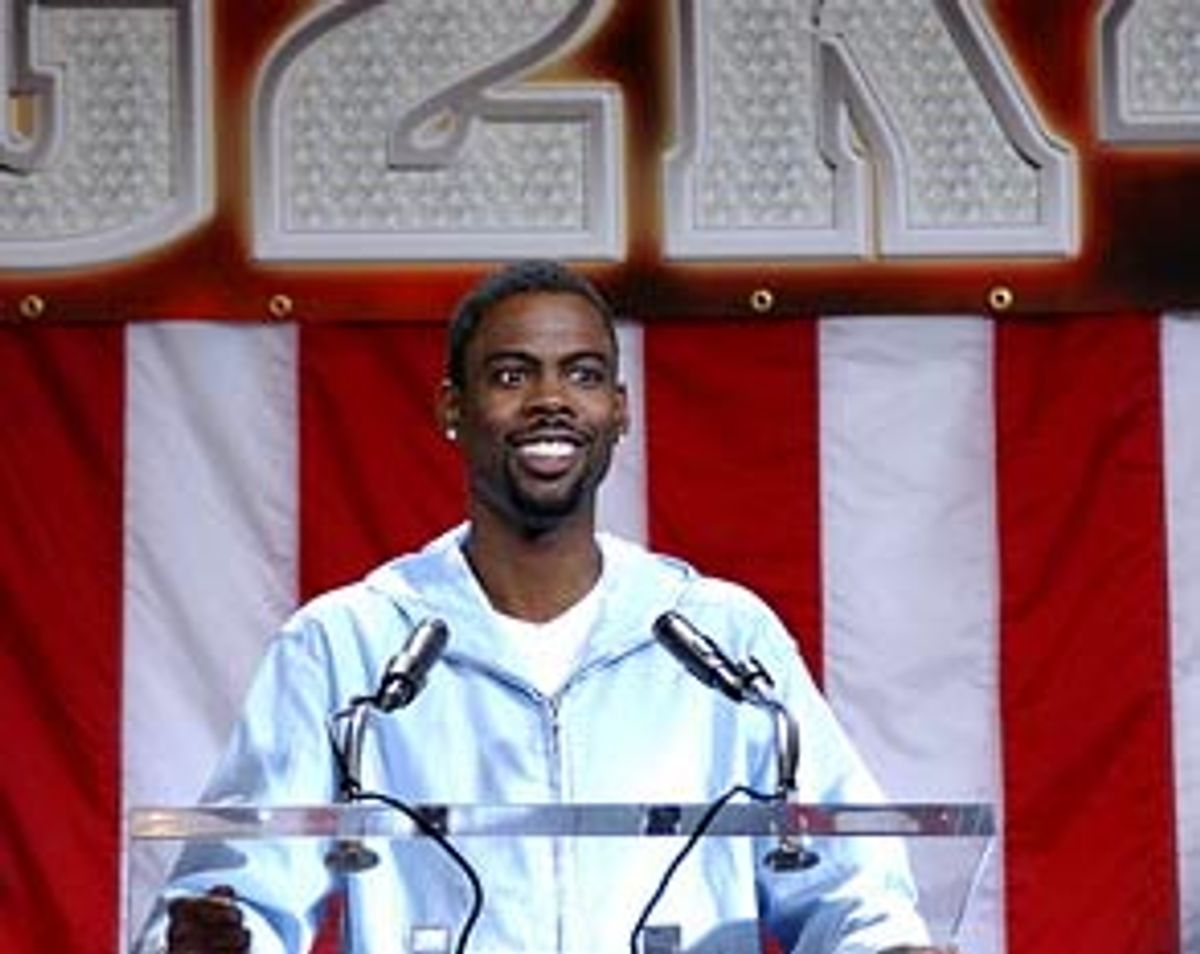 The villains in "Head of State" keep saying that the presidency is too important a job to be left in the hands of an amateur. The movie suggests that the same principle could be applied to making films. Making his debut behind the camera, Chris Rock is in way over his head. The movie, which he co-wrote and in which he stars as a D.C. alderman picked to run for president, is an excruciatingly amateurish production. Rock slips and slides around in search of an appropriate tone, and often the tone of the jokes violates the movie's premise. He has only the barest grasp of plot construction and it appears as if Dreamworks has given him, oh, $1.98 to make the movie. In scene after scene, you've never seen so few extras trying to convince you that they're a crowd.

It appears that Rock had in mind a Frank Capra-esque fable (a bad thing to begin with) about an honest man who rouses the populist instincts of the masses. When one of the two presidential candidates is killed in a plane crash, the dead man's party (presumably the Democrats) picks Rock to replace him. Their theory is that, as an inexperienced unknown, he's bound to lose but that the goodwill they generate by nominating a black man will carry them into office in 2008. How Rock squares that plot motivation with later scenes of panicked whites rushing to the polls to prevent a black man from being elected is unclear. But those scenes are typical of the anything-for-a-gag impulse that keeps making hash of the movie's premise.

Didn't anybody tell Chris Rock that candidates travel by plane instead of bus? Why are there no reporters anywhere near the campaign, and why are the ones who pop up as an afterthought to pepper him with questions wearing those fedoras that newspapermen wear in '40s movies? (They don't have cards that read "PRESS" stuck in their hatbands, but they might as well.) At times the movie seems to be about how the public (the 15 of them visible on-screen) responds to a candidate who tells them the truth, and at other times it seems to be a series of riffs about a guy who brings hip-hop culture to presidential politics. But populist fable and satire don't mix, and no explanation is offered as to why the public would respond to a guy who wears tracksuits and markets his campaign as if he were dropping his new CD.

It's depressing to see Rock pander to the most reactionary elements of the black audience. There's a shot showing gay voters as a bunch of drag queens and freaks that seems to have floated in from "Boat Trip." A white woman traveling with Rock's campaign has, we're told, been hired to be his "official ho" and thus avoid any sexual scandal. The misogyny extends to Robin Givens, who's given a tired running gag of a role as Rock's gold-digging ex-girlfriend.

Of course Rock's opponent, a corrupt and shallow career politician, has to speak in a Southern accent. Doesn't Rock know that the most effective president for black people was a white Southerner? Don't take my word for it -- read Ralph Ellison on Lyndon B. Johnson. Rock doesn't seem to know much about contemporary America; when his character travels to Memphis (a majority-black city with a black mayor) we see only white people. There's also that old standby for laughs -- honkies getting down to black music -- which, both here and in "Bringing Down the House," is becoming something like a new minstrelsy aimed at black audiences.

Instead of writing himself a role, Rock has given himself a series of stand-up routines. I loved watching him in the underrated "Down to Earth," but nothing he has yet done on-screen is anything like playing a character. He and co-writer Ali LeRoi certainly haven't written roles for any of the other actors. Usually, just the sight of Bernie Mac, who plays Rock's brother and running mate, is enough to get me laughing. He waits around here as if the script were about to be faxed over.

Worse yet, Rock doesn't seem to register that the spiels his character uses to win over voters don't have any more substance than the drivel his opponent dishes out. There's no comic surprise in the idea of a presidential candidate winning voters by telling them they're working too hard for too little money. Every jamoke on the make for votes does that. Besides, when it comes to the idea of a black president, Rock has been beaten to the punch. Not, as Toni Morrison would have it, by Bill Clinton. But by Dennis Haysbert on the Fox TV series "24," who, as President David Palmer, shows the determination of magnetism, brains, resolve, compassion and willingness to make tough calls we dream of in a president. I can't be the only Democrat who watches that show week after week and thinks, "If only this guy could run."