Lisa Germano made her hauntingly beautiful record alone, then turned down a tour so she could take care of her cat. 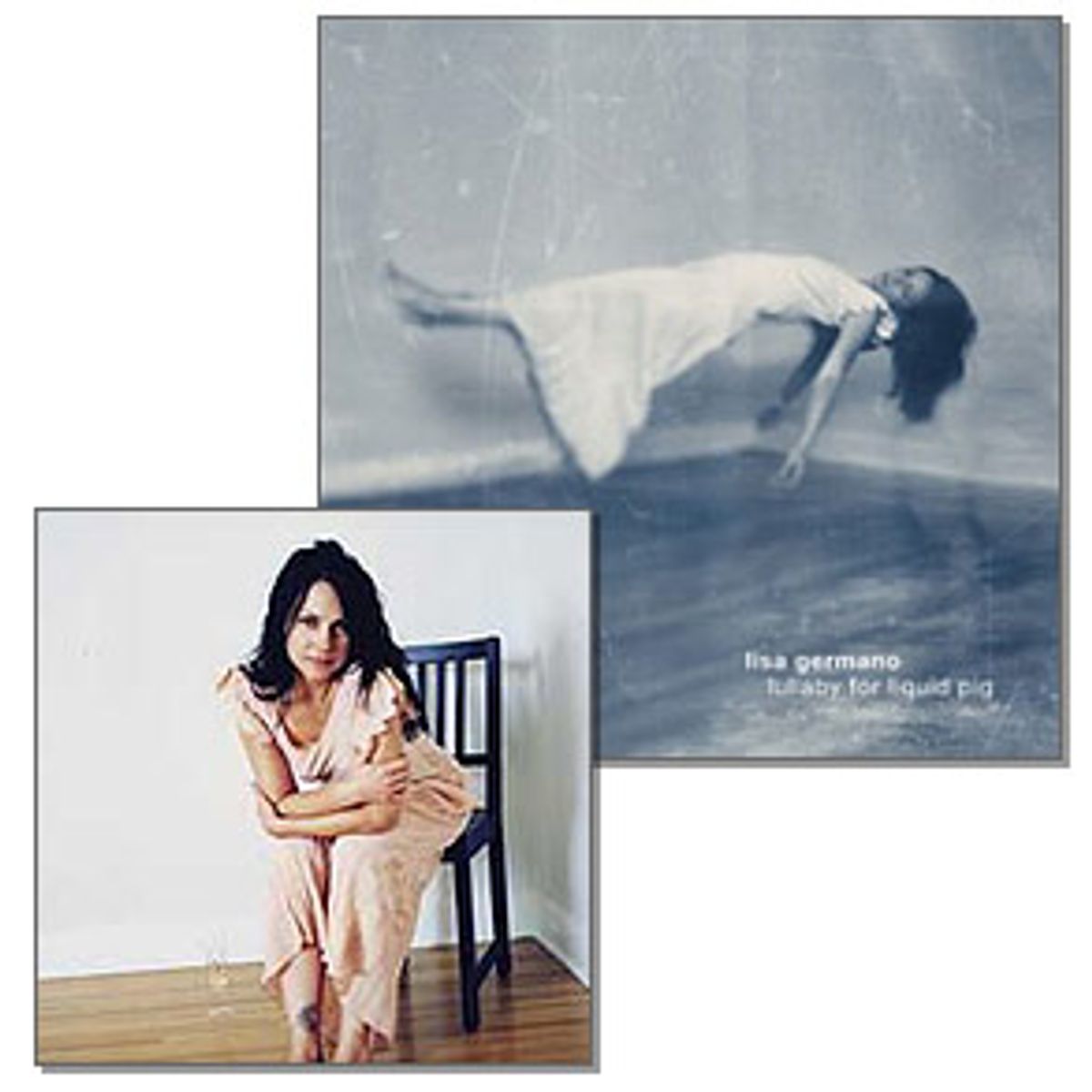 It's not surprising to learn that as a child, Lisa Germano delighted in self-inflicted pain. In some ways, she's never stopped picking her open wounds.

What's unexpected is that she doesn't mean it literally. "I used to lock myself in a closet and torture myself," she recalls. "Not cut myself or anything, but I'd have these childhood fantasies where everything was awful. I'd make myself cry, and then it would end when I was crying so hard that the prince would have to come and save me."

Now in her mid-40s, she's long since stopped waiting to be rescued. "I don't believe there's a prince coming anymore," she laughs. "I'm just sick of the whole thing." On the phone from her Los Angeles home, Germano sounds incongruously upbeat for a self-described "fairly dark person," but she blames her perkiness on morning coffee. Her demons tend to come out at night.

Boy, do they. Germano's latest effort, "Lullaby for a Liquid Pig," delves into those bleak hours before the sun comes up with raw emotion that's calculated to disturb. Stark, gorgeous songs weave a spell of deep-seated loneliness coupled with unceasing introspection; the album is a gut punch from the first hanging, ethereal note. "These are your secrets, hidden inside," she murmurs on the opening track, then lays them out, one by one, like canapés at a suicide's farewell party.

The tone is hardly unexpected, as Lisa Germano has never made music for the faint-hearted. For the last decade, the multi-instrumentalist (violin, piano, recorder, guitar, voice, etc.) has specialized in delving into the deepest crevices of her psyche, exposing nerves, tendons and viscera until she reaches the white gleam of bone. While critical acclaim has been lavish for album after album -- six since her self-released 1991 debut -- audiences have not flocked to buy Germano's records. This is a crying shame, as her intimate, near-whispered delivery and spare arrangements tower above your average chart-toppers' best efforts.

Germano's chosen subject matter doubtless has something to do with the elusiveness of financial success, especially in the context of a recording industry that celebrates superficiality. The bleak "Happiness" (1994) explored the depths and valleys of depression and relationships with breathtaking directness. ("You wish you were pretty, but you're not ... ha ha ha/ But your baby loves you, he tells you so all the time/ Oh, that must be why you're so happy together.") Yikes.

Her subsequent full-length release on 4AD, the harrowing "Geek the Girl," is an even more devastating dose of raw sensation. (Liner notes describe the record as the tale of a girl who is "constantly taken advantage of sexually" yet who still dreams of "loving a man in hopes that he can save her from her shit life  What a geek!") That album's pièce de résistance, the nervous-breakdown-inducing "A Psychopath," culminates with a recording of an actual 911 call made by a terrified woman as an intruder breaks into her home. It's deeply chilling and more than a little creepy.

True to form, 1996's "Excerpts from a Love Circus" was a muffled scream, as Germano wielded her sweet, often-tentative voice with a surgeon's precision. The matter-of-fact self-loathing of "I Love a Snot" reveals flashes of humor and self-knowledge: "Tubby tubby butt, tubby tubby face, tubby tubby stomach when I am with you  Icky icky breath, each and every kiss  you're a snot, and I adore you."

But honesty doesn't pay the bills. 1998's "Slide" turned out to be her last with indie label 4AD. In spite of reviews lauding the work and a burgeoning sense of hope woven through the record, it ended up selling a disappointing 6,000 copies. "They're still my friends, but I understood," Germano says about 4AD's decision to drop her. "They've got to pay the bills."

Still, the muse doesn't stop coming just because payday's been canceled. Germano's been tinkering with "Lullaby for a Liquid Pig" for the past three years -- in spite of having no record label and no money.

"I don't even want to make a lot of money. Just enough," she says. "I don't know how people make it. I've stripped away my life so I just live in a room." (Her income comes mostly from her day job at Book Soup on the Sunset Strip in Los Angeles, where she's worked on and off for five years.)

So in true DIY fashion, Germano recorded "Lullaby's" 12 songs at home -- a practice she's become accustomed to over the years -- and ultimately put them on the audio-editing software ProTools so that she could send tracks to various musicians to get their input from a distance, since a lack of finances prohibited working together in person.

With contributions by former Crowded House frontman Neil Finn, ex-Smiths guitarist Johnny Marr, and Wendy Melvoin (Wendy and Lisa/Prince), "Lullaby for a Liquid Pig" is an excellent -- albeit deeply disturbing -- addition to the Germano catalog. It's slotted to be released in April on ArtistDirect's new Ineffable label.

At first listen, one would think that the album is unambiguously about the seductions of booze (specifically, red wine). And while it's true that many of the songs on "Lullaby for a Liquid Pig" have to do with alcohol, Germano says that in talking about the album, she's come to the conclusion that it's not really about drinking at all.

Germano believes that drinking every night masks a deeper void. "There's something about alcohol that's either 'I'm a big drunk alcoholic' or 'Let's go out and have some fun,'" she says. "But it's really about the behavior. A lot of us have this need, this behavior. We have our vices. Some people have sex with a million people, some do heroin, some drink, but it all comes from the same lonely place."

She laughs and tries to lighten the mood. "To mock your own behavior makes it less sad. Even the title [of the album] is mocking myself, that 'Everything is about me' thing, being so self-consumed. There's just too much me sometimes."

Of course, "too much me" is the very essence of Lisa Germano's work, and "Lullaby for a Liquid Pig" is no exception. The hazy, almost underwater vocals of the opening track, "Nobody's Playing," are accompanied by a hesitant melody picked out on piano keys. When she murmurs, "Circles and circles/ Places to drown/ All that you feel/ Is you're going down," there's a doomed inevitability, a noose that only grows tighter as the album progresses.

The discordant opening of "Liquid Pig" is a rumination on morning-after regret, Germano's accusatory whisper "Who did you call/ What did you say" a precursor to the certainty that whatever you said, whatever you did, you'll doubtless do it again -- and feel like shit the next day. The delicate prettiness of "Pearls" is laced with self-loathing ("Hurry world/ Whirl and whirl/ Stop when you fall down") and the siren call of home.

"That song is about alcohol," Germano says. "When you look inside, you see some really bad shit. But then, as you're getting drunk, you feel like you're home. But that's not right, getting drunk to do that. It strips it away and then puts it back in. When you hate yourself, all sorts of stuff grows, but in the end there's nothing to learn from alcohol."

There's a raw quality to Germano's voice on many of the songs here that she freely admits is owed to her vices: "I like some smoke and some wine when I sing," she says. "It makes me like the sound of my voice. It doesn't make it gravelly, doesn't make me turn into Marianne Faithfull. It just deepens it." She almost sounds giddy on the song "Party Time" when she drawls, "And I smell like wine, most of the time, a big red wine."

The album's title track flirts with the idea of going cold turkey before quickly backpedaling: "Well, if I do stop/ Or if I don't stop/ It doesn't matter/ I probably won't stop." A fluid segue into the next song, the almost dizzy introspection of "Into the Night," finds Germano making a laundry list of denial: "What not to see/ What not to hear/ What not to be/ When you begin seeing your sins."

A slender hint of hope snakes through the album's last track "To Dream," tempered with a heartbreaking fragility. Of course, after all that's come before, the listener clings to lines like "Don't give up your dream/ It's really all you have/ And I don't want to see you die," hoping that wishing might just be enough -- just this once -- to make it so.

Germano's labor of love is coming out on veteran record producer Tony Berg's newest venture, Ineffable Records (billed as a "creative collective" of artists). The release will almost certainly not change Germano's immediate financial situation; she had to plunk down nearly every penny she got as an advance to pay the vet bills for her ailing cat, 12-year-old Miamo-Tutti. "The cat got really sick really quickly," Germano says. "I had to feed him by hand and give him medicine a couple of times a day." The sick kitty meant that she had to postpone a planned tour with former Crowded House frontman Neil Finn, a decision she says Finn supported wholeheartedly.

"John Cougar probably would have had me arrested," she laughs, imagining telling the hard-rocking Mellencamp that she couldn't go on the road because she had to nurse an ailing kitty. Since nearly every article ever printed about Germano mentions her one-time affiliation with his band as a fiddle player, she kicks herself for bringing it up. "I've tried so hard not to have the press mention it!" she laughs.

Besides her dark past as a backup musician for heartland rocker Mellencamp, Germano has another incongruous skeleton in her closet. In high school, she was a cheerleader. "I didn't expect to make it and was shocked when I did," she recalls. "Even then I was not a positive person. I got yelled at every day for not smiling, so I quit." She laughs when she tells the story, but she sounds as if she's still unsure as to what went wrong. "I thought I was smiling," she says ruefully.

Sadly, Miamo-Tutti (who Germano describes as a "very Italian cat), ultimately didn't make it. ("I'm sure [he's] having a big party with all the other cats up there," she says in an update on her Web site.) Perhaps he'll make an appearance in a future Germano song; a likely scenario, given her penchant for turning episodes from her own life into art.

When asked what it's like to perform such personal material live, Germano is matter-of-fact. "These songs really work best when I have a sense of humor," she explains. "It lets the audience think, 'This is hard, but at least she's all right.'" While she doesn't get stage fright, she does say that wine can help her to focus better. "It's important that I really start breathing before I go on. My voice is all breath. Without the breathing, there's nothing there."

Julene Snyder is a writer living in San Diego.