Would a dirty bomb make Washington uninhabitable? Would another terror offensive make civil liberties obsolete? The final installment from "After." 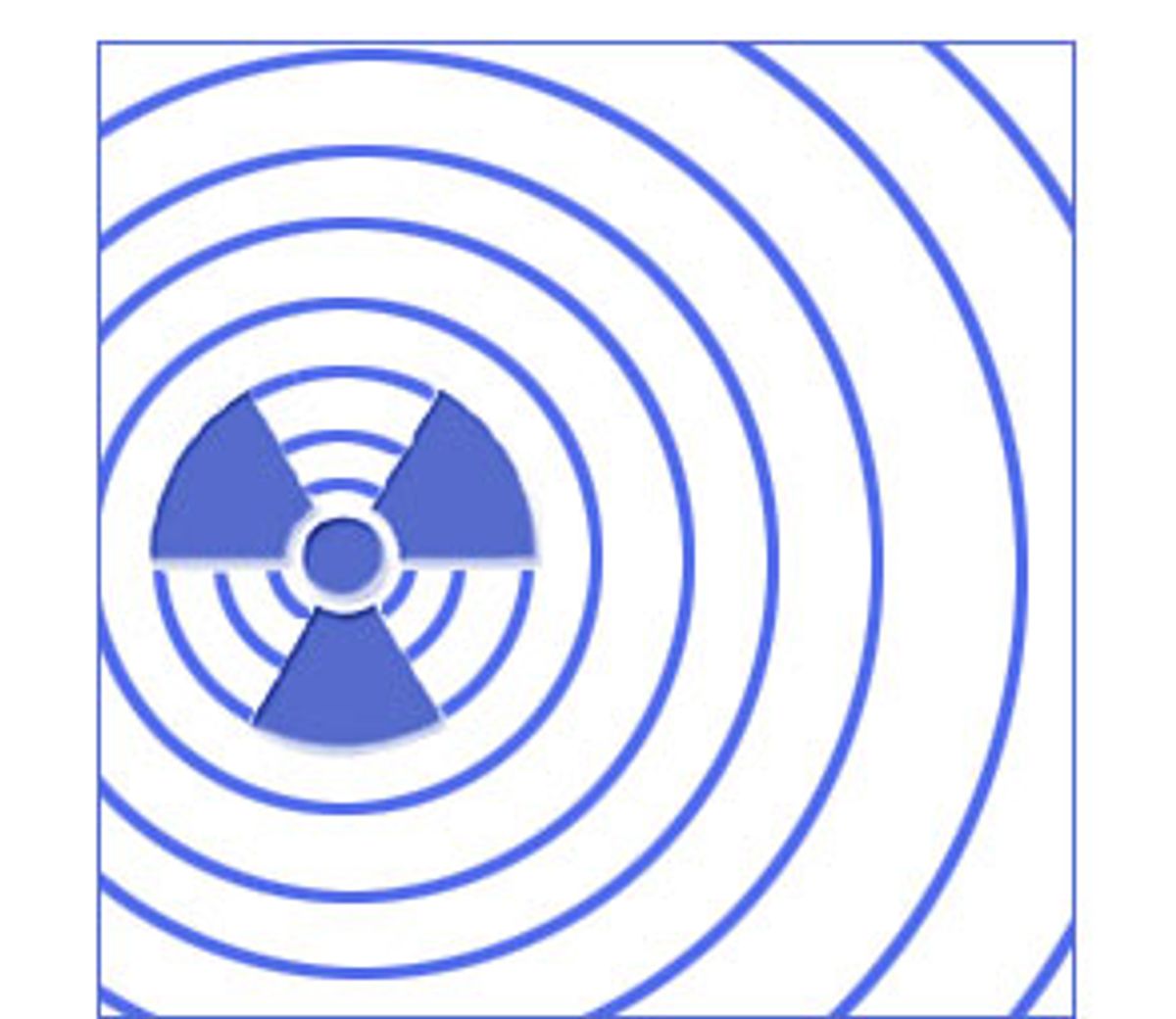 Editor's note: This week, Salon is publishing selected scenes from "After," Steven Brill's definitive, deeply revealing book about how America has changed since the national trauma of September 11. Brill, who started his career as an investigative reporter before becoming a media entrepreneur (the American Lawyer, Court TV, Brill's Content), draws from interviews with more than 300 people, as well as court filings, internal summaries of high-level government meetings, and other documents to create his portrait of a nation struggling to redefine itself while holding on to its fundamental values. "After" is told through the eyes of a wide range of powerful and unsung people, from Attorney General John Ashcroft to ACLU executive director Anthony Romero, from a World Trade Center widow to the attorney for John Walker Lindh, from lobbyists in Washington to a Silicon Valley entrepreneur whose company makes machines that detect bombs in luggage. Chronicling their stories on a nearly day-by-day basis, "After," which will be published in April, is the most sweeping, yet detailed, account of what Brill calls "the September 12 era." It's a "towering achievement," in the words of New York magazine's Michael Wolff, in which "the granular becomes epic." Read Excerpt 1: "9/12" and Excerpt 2: "Protecting America."

It was a home-security nightmare. A group of federal and local Washington officials were dealing with the detonation of a bomb on an empty school bus parked on the south side of the Air and Space Museum in downtown Washington. Initial estimates were that there were 15,000 museum visitors and federal workers (at the headquarters of the Federal Aviation Administration and departments of Education and Health and Human Services) in close proximity to the blast.

That wasn't the worst part. Within 20 minutes after the first emergency responders arrived, radiation was detected in the air. A so-called dirty bomb had been detonated in the nation's capital.

It was all practice -- a scenario set up at a workshop conducted by the Center for Strategic and International Studies (CSIS), a Washington think tank specializing in national security issues. Sitting around the table planning a response were people from Homeland Security chief Tom Ridge's office, other federal agencies such as FEMA and the Office of Personnel Management (which had to make the call about whether to send the city's workforce home and, if so, how to tell them), and local police, fire, and health officials from the District of Columbia and surrounding counties.

The scenario posited that a conventional TNT bomb had been laced with a radioactive material called cesium 137, or Cs 137, a common component found in medical radiation treatment. Although hundreds or even thousands would die from the explosion, only three or four might get cancer from this level of radiation. But the group knew that fear of the radiation would be devastating. Soon the media would be reporting, accurately, that radiation levels in an area covering most of Washington were above, although not by much, the generally accepted minimums -- and might stay that way for 30 years. Not allowing people to evacuate because they might carry radiation traces with them to surrounding suburbs might have been the best idea, but no one could figure out a way to keep them from leaving. Nor did anyone have a plan for getting the media to report on the situation without creating a panic.

Thus, a report of the workshop would later conclude, "The scenario presented participants with reports of deserted D.C. streets and hotels, workers refusing to return to work, and parents refusing to send their children back to schools that had conducted field trips to D.C. the day of the attack. These reports were indicative of the deep, long-lasting psychological impact that a radiological attack could have."

That conclusion echoed a hearing held a month earlier by Senate Foreign Relations Committee Chairman Joseph Biden, in which Biden, who invited a stellar list of witnesses, bluntly stated that his purpose was to highlight the problem that the damage from the psychological fear from such a dirty bomb attack would far exceed the actual loss of life.

The president of the Federation of American Scientists presented Biden's committee with a scenario much like the one those at today's exercise dealt with, only he provided real numbers. Suppose, he said, some cesium about the size of a piece recently found, amid much publicity, in North Carolina was mixed in with a conventional bomb and set off in the center of Washington. Unless the area was basically demolished, scrubbed, and rebuilt, people who remained to live or work for 40 years in the general vicinity of where the bomb went off would have their chances of getting cancer increased by one in 10,000. Because that cancer risk increase happens to be the threshold for environments requiring a cleanup under the federal Superfund cleanup law, it could be made in media reports to sound really scary. But it really means an extra 50 deaths in an area of 500,000 people. Indeed, since everyone already has a one in 20 chance of dying of cancer anyway, this only increases their chances minimally. So, the newspaper headlines could either say it was a minimal increase -- or that everyone in Washington was now living under the equivalent risk of living near a site requiring a Superfund cleanup. Which means that, as the CSIS game playing suggested, much of Washington might be abandoned and tens of billions might have to be spent to destroy everything and rebuild it.

Biden's purpose in holding this hearing was plainly to call attention to the dilemma, because only by having the public understand it could panic-induced decisions likely be avoided. How else, but with advance public dialogue and understanding, could a president propose that the people ignore radiation levels that equaled Superfund limits, and get back to work and live in Washington?

Some on Ridge's staff believed that this was not a subject that should have been left to think tanks like CSIS, or to well-intentioned senators like Biden. It needed more firepower than that. And it was one area where Ridge and his Office of Homeland Security didn't need new authority to be effective. Ridge's office had recently orchestrated the publication of a booklet on how office buildings could secure their ventilation systems from biological attacks. They could have led the charge here with a public information campaign to prepare the public to deal with the psychological fog of a dirty bomb attack. Ridge didn't need Ashcroft's or Rumsfeld's or anyone else's cooperation to mount the bully pulpit on this issue, and even to bring the president with him, so that the public could be prepared in advance to think about an equation like that one-in-10,000 number, and realize that a dirty bomb attack -- potentially the most potent destroy-their-way-of-life threat in the terrorists' arsenal -- could not succeed as long as everyone was thinking rationally.

Ridge, in fact, had another of those interagency working groups working on preparing precise damage estimates for all varieties of dirty bombs. But neither Ridge nor anyone in the White House wanted to panic the public by talking about this in advance of something actually happening. The CSIS workshop and the Biden hearings suggested that that was a mistake, that depending on the citizenry to think clearly and calmly after the explosion was dangerously wrong.

"We know we have to deal with this, sooner or later," one of Ridge's senior aides would say more than six months later. "We just haven't given it the attention it needs. At the least, we should be holding background briefings with selected members of the press, or maybe we should mount a full-dress public campaign."

"Talk about my lousy sleep patterns. This thing," Anthony Romero recalls, "kept me up several nights straight, thinking about it after we went through it."

ACLU executive director Romero and his eight senior staff people gathered this morning at an off-site conference room for a strange, five-hour encounter session. Led by a political science professor from the University of California at Berkeley who says he conducts multiday "scenario methodology" sessions for large corporations, the group groped for ways to make the ACLU more relevant by role-playing their way through the following disaster:

It's November 9, 2003, and a low-scale nuclear device has been exploded in the port of Los Angeles. Suicide bombers have struck at the same time in London, New York, Chicago, Paris, and Berlin. There are reports that New York's water supply has been contaminated with a deadly chemical, and that office workers in major American cities have broken out in rashes.

For the first two hours, the group left the ACLU out of the picture and instead assumed two roles each that were assigned to them by the Berkeley professor, ranging from Attorney General John Ashcroft, to Transportation Secretary Norman Mineta, to Microsoft chairman Bill Gates, to Senate Democratic leader Tom Daschle, to then AOL chairman Steve Case. They then plotted what these people would do, coming up with possibilities such as a move to cancel the 2004 elections, a coalition (led by Gates, Case, and Mineta) to push for a national identification card, an initiative to implant a tracking chip in every immigrant, and the formation, by Pat Robertson, Ashcroft, and the NAACP, of a Coalition for National Values, whose platform is that multiculturalism is what has endangered national security.

Then, they put their ACLU hats on -- and found that there wasn't a whole lot they could do. Even the allies on the right who had stood with them against the USA Patriot Act had fallen away because things were so dire. Romero wanted the group to agree to focus on fighting the election suspension issue politically, while ignoring the immigrant implant battle. We have to pick priorities, he argued.

But he couldn't get any agreement. The litigators on the staff basically wanted to sue to block everything. Romero protested that they'd never win and would waste resources -- which were in particularly short supply, because the economy had collapsed in the wake of this multifaceted disaster, and there were few donors on the horizon. He urged that they had to try to pick whatever spots they could to rally supporters and potential allies. The organization, he said, had to stop thinking so much about lawsuits and start thinking more about political organizing -- forging alliances wherever they could, even if it meant compromise. Again, there was no agreement.

Romero's main takeaway from the session was that he needed to get out there now and raise money to sock away for a disaster. They had to reach out and make new friends on Wall Street and in the business community, and even in Hollywood and in the media, so that they wouldn't be caught so flat-footed if something like this happened. They needed to stop thinking as if they were doctors in an emergency room, simply responding to whatever the government did by filing a lawsuit or lobbying to block something. They had to be proactive.

Maybe, but his staff mostly didn't see it that way. They thought the whole thing was just depressing or a waste of time. To them, their mission was, and always should be, to be the one organization that would stick to bedrock principles, however bad the environment was. That was their role, no matter what the real or imaginary crisis.

"These were," said their session leader, "smart, devoted people who really care about what they're doing, and who love and respect Anthony. But," he added, "they just didn't have a clue about what they would do, or how they should change."

Steven Brill is currently a Newsweek columnist and a consultant to NBC on issues related to the aftermath of the Sept. 11 attacks