Bikram Choudhury, founder of the fastest-growing style of yoga in America, has copyrighted his poses and is threatening to sue anyone who teaches his "hot" style without permission. Is this enlightenment? 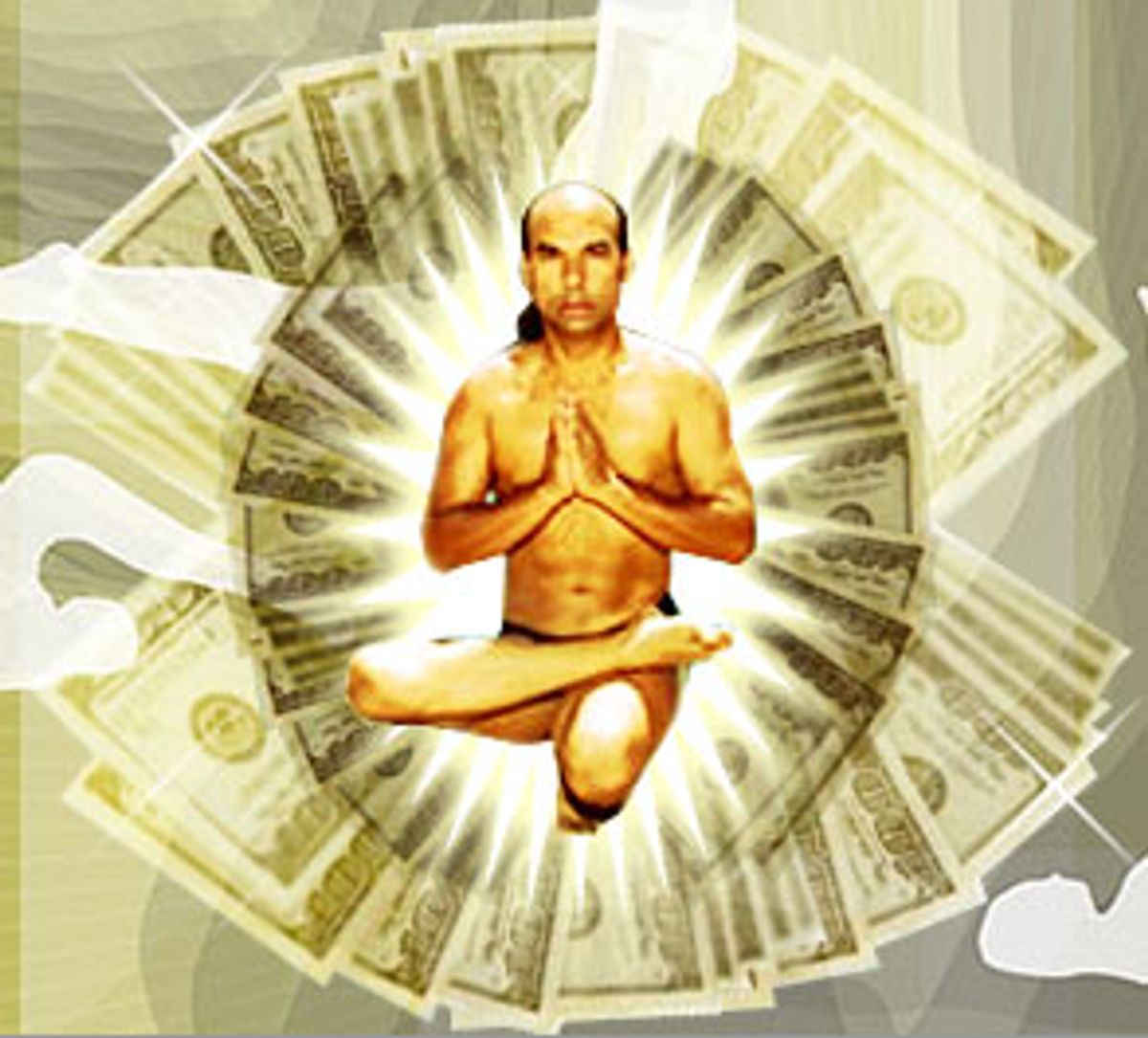 Kim and Mark Morrison thought they had achieved small-business nirvana. Eight years after Kim borrowed $25,000 to open a tiny yoga studio in Costa Mesa, Calif., it has grown into a bustling enterprise that employs 12 instructors and offers 40 classes a week in several styles of yoga. After years of working long hours, and investing more than $100,000 in expensive renovations, the Morrisons' venture, Yoga Studio Costa Mesa, has become more than just a place to bend and stretch. The studio -- with its meditation room, yoga programs for kids and pregnant women, spaces for baby showers and weddings -- has become the nexus of a small but devoted community.

A year ago, the Morrisons received a letter that threatened the future of their beloved business. The correspondence came from lawyers for Bikram Choudhury, founder of the fastest-growing style of yoga in America, Bikram Yoga. "It was a dagger of a letter -- long, nasty and filled with allegations," says Mark, who is also a lawyer. The missive alleged that the Morrisons were violating a recently acquired copyright and insisted that they comply with a long list of demands and pay fines starting at $150,000 -- or risk a lawsuit. The warning, the Morrisons say, makes a mockery of yoga's ultimate promise of both peace of mind and freedom. "We're not just scared about what this could do to our finances," Mark says. "Yoga is something really personal, something that we love. And that's being attacked."

If Choudhury has his way, every Bikram Yoga studio in the world will soon be franchised and under his control. To start this process, he recently obtained a copyright for his particular sequence of yoga poses -- a 90-minute series of 26 postures and two breathing exercises done in a room heated to 105 degrees. Choudhury says that yoga studios that want to continue teaching Bikram Yoga must pay franchise and royalty fees, change their name to Bikram's Yoga College of India, stop teaching other styles of yoga, use only Bikram-approved dialogue when instructing students, refrain from playing music during classes, and a host of other stipulations.

"From the business side, I kind of understand it," says Judith Hanson Lasater, a prominent Bay Area yoga instructor who has been teaching since 1971. "But from the yoga side I think it's really sad." Mom-and-pop studios across the country, owned by people like the Morrisons who feel they are doing a service by helping to disseminate the teachings of yoga, are outraged by Choudhury's hubris. "Yoga is an old philosophy and an old tradition," says Tony Sanchez, who opened a Bikram Yoga studio in San Francisco in 1985. "It's ridiculous to have someone claiming that these are their postures."

Choudhury, 56, is a yoga guru so brash that he has been known to compare himself to Superman and Buddha, teach from a throne wearing nothing but a tiny Speedo and a headset mike, and proclaim his style as "the only yoga." When asked how he could make such drastic statements, he told Business 2.0 magazine: "Because I have balls like atom bombs, two of them, 100 megatons each. Nobody fucks with me." Perhaps because of his erratic, grandiose behavior, the hundreds of cease-and-desist letters he sent to studios across the country were remarkably effective. Most studios either met his demands, stopped teaching Bikram classes and using the Bikram name, or shuffled around the standard 26-pose sequence.

But not the Yoga Studio Costa Mesa. After researching current law and talking to several intellectual property attorneys, the Morrisons decided not to comply -- and sure enough, Choudhury slapped them with a lawsuit. The case is now in the discovery stage, with both parties exchanging documents in preparation for court. "To stop them from stealing I must go to the lawyers," says Choudhury. "When in Rome, I must do as the Romans do. When in America, make Bikram copyright and trademark."

The Indian-born Choudhury has embraced the American way since 1971, when he arrived in the United States and sold Americans a sweaty workout and a spiritual practice all wrapped into one neat package. Since then he's developed a cult following and settled in Beverly Hills, where he collects Bentleys and Rolls Royces. Choudhury claims that his yoga, practiced in a mirrored room in extreme heat, cures everything from heart disease to hepatitis C. He has trained more than 2,000 teachers in his method ($5,000 per training) and says he is opening two new studios each day. Worldwide, he has 720 schools in 50 states and 220 countries. With the help of his audio, video and clothing lines, his fortune is estimated at $7 million.

To protect his assets, Choudhury says he must franchise. "I'm not happy about it," he insists. By copyrighting the poses, he says, he will protect his intellectual property and discourage copycats from teaching what he considers his invention. "When I first came here, I never charged a dime," he says. "But my students said, This is not Calcutta; this is America. You have to charge money or else nobody will believe you know something." But many feel Choudhury's actions breach the most basic of yogic teachings -- generosity, contentment, gentleness and, ultimately, self-liberation -- and that his pathological need for control and power renders him spiritually bankrupt and focused solely on the bottom line.

"It's ludicrous," says Jimmy Barkan, a former Bikram instructor who has been teaching yoga in Fort Lauderdale, Fla., for 20 years. "[Yoga] can't be regulated." Yet that's exactly what Choudhury wants to do, to standardize his classes so that whether you're in Washington, D.C., or Walla Walla, Wash., your experience will be the same. Until recently, Barkan considered Choudhury "like family." But when Choudhury told him to stop teaching certain classes and Barkan refused -- he had already invested $200,000 in his studio and signed a four-year lease -- he was officially blackballed on Choudhury's Web site. Now Barkan has hired a lawyer and is working on reorganizing his poses so he can't be sued.

Or can he? Choudhury and his team of five lawyers say yes. They insist they can easily prove willful violation, in which case they'll collect $150,000 per infringement. For example, if a studio doesn't go by the name "Bikram's Yoga College of India" and teaches with music, they would be charged $300,000 for two infringements. "If you look closely at the copyright laws, [the protection of Bikram's poses] is precisely what they are meant to cover," says Jacob Reinbolt, Choudhury's attorney who heads up the intellectual property group at Procopio, a San Diego law firm. He adds: "I do the yoga, I try to be as spiritual as possible, but at the same time, it's just as important to protect creativity."

Other lawyers say Choudhury doesn't have a flexible leg to stand on. Choudhury's sequence could be considered in the public domain rather than an original work because his Indian teacher, Bishnu Gosh, taught the poses to him. Copyright lawyer Ken Swezey, from the New York firm Cowan, DeBaets, Abrahams, and Sheppard, says that simply obtaining a copyright doesn't mean that Choudhury's assertions will hold up in court. "Copyright law protects 'expression,' not ideas or processes," says Swezey. "A court would have to be convinced that a sequence of the exercises is original, protectable 'expression' rather than merely collection of factual material."

Choudhury's detractors can take some comfort from a legal precedent involving Pilates, an exercise program that focuses on creating core strength. In the 1980s, a New York-based Pilates studio purchased the name as a trademark and required those who wanted to use it to pay a licensing fee and those who wanted to teach it to receive certification through their studio. In 1996, a Sacramento-based manufacturer of Pilates equipment, Balanced Body, took exception to the trademark and filed a lawsuit, with the strong support of many in the Pilates community. The litigation lasted four years, until a Manhattan federal court ruled that "Pilates," like "yoga" and "karate," is a generic term that cannot be monopolized. The court also rejected the argument that only teachers certified by the Pilates studio were qualified to teach the method.

Even though the law seems to be in their favor, many teachers are worried that Choudhury, with his vast financial resources and outsized personality, will somehow manage to steer the law in his favor. "If he succeeds, he paves the way for another person to step forth and claim ownership of iyengar, ashtanga, power yoga, meditation and other forms of yoga-related healing arts," says studio owner Mark Morrison. The larger question is where to draw the line, both legally and ethically, in preserving an ancient tradition that is meant to be shared. "Spiritual practice should be free to all," says Jacob Needleman, a San Francisco State philosophy professor and the author of "The American Soul." "At the same time, you can't deny, even if you are a spiritual being, that you are living in a world organized by money."

Which is precisely why resourceful yogis have started to mobilize: Careful not to use the B-word, the Hot Yoga Alliance, which calls itself "a community of support," has a message board and a link that offers legal advice. And a nonprofit organization tentatively called Once Source Yoga Unity is scrambling to raise a legal defense fund for the Morrisons and other studio owners who are threatened. Mark Morrison says dozens of yogis have already pledged their support -- and just in time. Reportedly, Choudhury has been imploring graduates of his teacher training to open a studio in Costa Mesa to put the Morrisons out of business.

"I don't care," Choudhury says of those who oppose him. "They are pissing in the wind. There is always some idiot. So what can you do? You treat an idiot like an idiot." As divisiveness grows over who, if anybody, owns yoga in America, one thing seems clear: The essence of yoga, or "union" in Sanskrit, seems to have gotten lost in the translation.

Nora Isaacs is a writer and editor living in San Francisco.