This switched-on futuristic anime noir is visually stunning -- and it makes a lot more sense than "Spirited Away"! 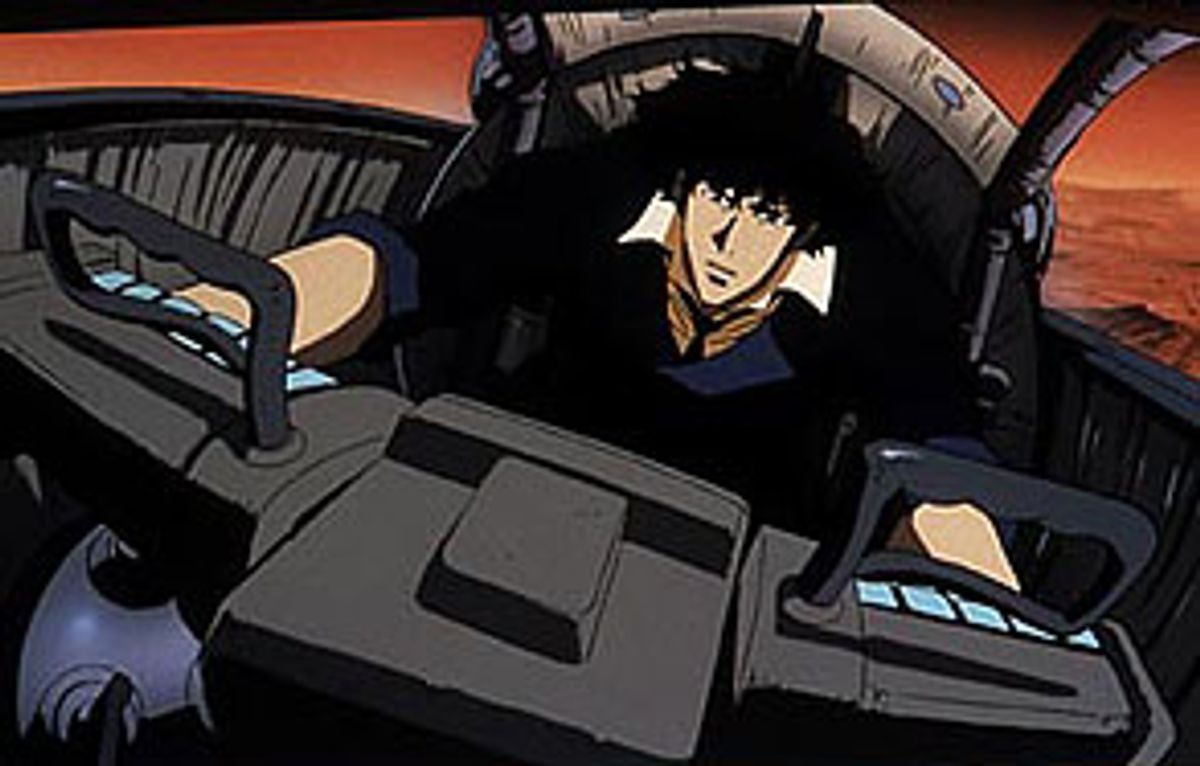 I wonder how many of the dutiful art-house filmgoers who were left breathless by the beautiful but narratively stringy "Spirited Away" will turn out for "Cowboy Bebop: The Movie"? "Cowboy Bebop" has a lowlier pedigree: A movie version of the popular anime TV show (it can be seen in the U.S. on Cartoon Network), it's juicily violent (although not particularly graphic), deeply romantic and indisputably lively -- much livelier, I'd argue, than "Spirited Away" -- and the plot, as convoluted as it sometimes is, makes a whole lot more sense. I'd also argue that "Cowboy Bebop" is just as visually inventive as "Spirited Away," if not more so.

I know "Spirited Away" is a different sort of movie from "Cowboy Bebop"; I also know that it operates on dream logic, which means that it's not supposed to make sense. But despite the hosannas it received, "Spirited Away" bored me to tears, to the point where I could barely enjoy its lush and admittedly gorgeous images. I felt I was being held hostage by two hours' worth of a toddler's rambling narrative: "Then the monster came and then there were some people, but they weren't people, they were pigs, and then I saw a lady ..."

Although I will confess to a fondness for the Radish Spirit, I don't really want to see the world through the eyes of a child if it means checking my brain at the Candyland entrance. Instead of restoring my sense of awe and wonder, "Spirited Away" made me want to rush out and rent the darkest, grimiest noir I could lay my hands on. And a stiff belt of Scotch wouldn't have hurt, either.

But I will grant that, like "Spirited Away," "Cowboy Bebop" could be considered anime for people who don't like anime (as well as, of course, for those who do). "Cowboy Bebop" is a kind of sci-fi noir, set against an odd but fascinating patchwork of pop music styles. The movie's soundtrack features everything from faux Lynyrd Skynyrd to faux James Brown to faux versions of that bland but chirpy "ba-ba-dee-dah" middle-of-the-road scatting you used to hear on '60s movie soundtracks. Just as the visuals in "Cowboy Bebop" mesh to form an incredible simulation of a futuristic real-life world, its music is an incredible simulation of things we've heard many times before -- they sound fresh and strange and familiar, all at the same time.

"Cowboy Bebop" is set in 2071, in a series of cities that look a lot like New York, Los Angeles and someplace in Morocco, although we're to assume that most if not all of them are actually on Mars or other assorted planets. Spike Spiegel (voiced by Steven Jay Blum; the English dub of "Cowboy Bebop" uses the same actors who do the voices on Cartoon Network), a bounty hunter, is the hero of "Cowboy Bebop." Massively handsome in a Spandau Ballet sort of way, he's got a look straight out of the early '80s: His body is a lanky inverted wedge, and he's usually dressed in a jacket with asymmetrical lapels; his pitch-black hair stands up in wavy, spiky points, as if he and Antoine de St.-Exupery's Little Prince shared the same hairdresser.

Spike's colleagues and pals include Jet Black (Beau Billingslea), a fellow bounty hunter who also happens to be a cyborg; Faye Valentine (Wendee Lee), a comely cutie (her standard outfit is a tight, midriff-baring top with a blousy shirt tied rakishly over it) who is also a bounty hunter -- she needs to work off a bunch of gambling debts; Edward (Melissa Charles), a loopy teenage genius hacker who is, incidentally, a girl; and Ein, a Welsh Corgi who is really a "data dog" (whatever that means).

But Ein is special for other reasons. He's one of the most charming and beautifully animated canines of recent years: His expressions are true Corgi, and the animators have taken great care to get every twitch of that fluffy white butt just right. He and the rest of the "Cowboy" team are determined to sniff out Vincent (Daran Norris), a troubled former soldier whom they believe to be responsible for a tanker explosion that filled the air with a deadly chemical substance, killing hundreds. And that was only a test run. The crew chase Vincent hither and yon, zooming around in futuristic aircraft and at one point confronting him on a monorail car. The plot of "Cowboy Bebop" is absolutely flaky, but it actually makes more sense than most live-action action movies out there -- which is to say that director Shinichirô Watanabe and writer Keiko Nobumoto at least take the trouble to clarify certain puzzling details with a random line or two. (That's more than you get in big Hollywood clunkers like "Basic.")

There are plenty of allegedly complex subthemes in "Cowboy Bebop," most of it stuff having to do with suffering and honor. There's also romance: Two of the male characters, who are in some ways mirror images of one another, are haunted by women they've loved in the past. There are even wise American Indians, accompanied by a noble wolf, who save the life of our hero, bandaging him up and sending him back into the world with a bit of sage advice. "Cowboy Bebop" feels familiar in more ways than it seems truly modern, but that's half (if not all) of the fun of it. It's a blend of snippets and sound bites from our collective past, recombined in a way that's inventive and entertaining.

And, most important, it's beautiful to look at. There's some gorgeous perspective work in "Cowboy Bebop": A group of pedestrians gathered in a futuristic Times Square look up to watch a news report transmitted on a giant screen, and we get a bird's-eye view of their upturned faces; we see a giant parade balloon in the shape of a pumpkin reflected in the sides of a glass skyscraper.

And there are moments of pure, undiluted charm: In my favorite sequence, two characters sit in their space-pod vehicle at a futuristic drive-in, watching an old western. The western is animated, but it's in black-and-white, peopled with very realistic-looking characters; it's made to look like real old movie footage, its surface dancing with scratchy lines and flecks -- a lovely touch. Those are just a few examples of the visual intelligence at work in "Cowboy Bebop." There's something to be said for watching an animated movie not with the eyes of a child, but with those of a turned-on grownup.