The presidential candidate -- and decorated war veteran -- fires back at his GOP critics. Will the rest of the Democratic Party take his lead and fight fire with fire? 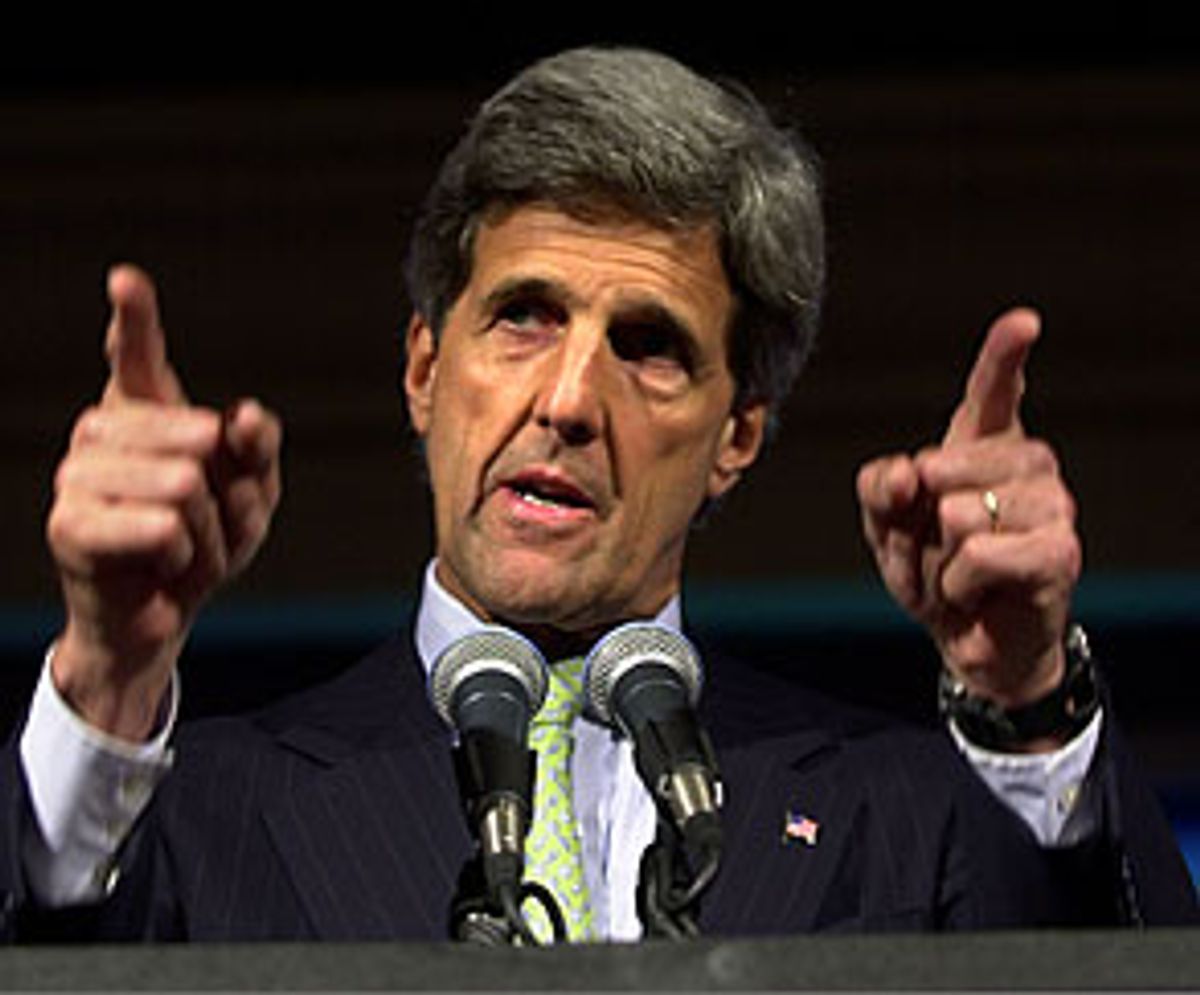 Watch closely, people, because this is how it works: A Democrat says something vaguely controversial. Last March, for instance, Senate Majority Leader Tom Daschle asked President Bush about his goals in Afghanistan. In October, former Vice President Al Gore criticized the push for war with Iraq. And just a few weeks ago, Daschle again -- the poor sucker -- suggested that Bush's failures of diplomacy made war inevitable.

And they're off! The GOP's snarling attack dogs slip their leashes and take their victim down. They go for the soft white meat of the throat. They won't be happy until he's politically dead or at least maimed, silenced for a good long while. Republicans said Daschle's questions about Afghanistan gave "aid and comfort to the enemy," and the party sponsored TV ads linking the South Dakota Democrat to Saddam Hussein. They smeared Gore as a "San Francisco Democrat" (that's where he gave the speech), and Bill Bennett insisted his remarks were "political suicide." Daschle got off easy last time -- instead of comparing him to the Butcher of Baghdad, Republicans merely called him French. And in all three instances, other Democrats were mostly silent in the face of the attacks.

It's happening again right now, and almost nobody's trying to stop it.

I took a shot at Massachusetts Sen. John Kerry three weeks ago for declaring, on the eve of war, that he'd mute his criticism of President Bush while troops were in harm's way. When he finally spoke out Wednesday -- telling New Hampshire Democrats, "What we need now is not just a regime change in Saddam Hussein and Iraq, but we need a regime change in the United States" -- I wondered why he immediately tried to backpedal from using the term "regime change."

Now I know. It's starting to look like I was wrong, and Kerry was right: If Republicans have their way, criticizing the president during wartime may turn out to be political suicide. Kerry's candidacy is lying in an alley right now. The usual suspects have worked him over: Tom DeLay ("desperate and inappropriate"), John Podhoretz ("It's unfair, it's ugly and it's disgusting"), Andrew Sullivan ("Kerry is now indistinguishable from the most hardcore anti-war leftists" -- Really, Andrew? Even "million Mogadishus" Nicholas De Genova?). The normally shrewd Keith Olbermann wondered aloud on MSNBC Thursday night whether Kerry's run for president can be saved. Yet Democrats aren't thundering to defend him.

Luckily the decorated Vietnam war veteran is defending himself. After first seeming to back away from his "regime change" quote, when Republicans came after him, Kerry came out swinging. "I'm not going to let the likes of Tom DeLay question my patriotism, which I fought for and bled for in order to have the right to speak out," he told a teachers' group. (That's a veiled reference to the fact that Delay not only sat out Vietnam, he blamed minorities for taking up all the available places in the military.) And in an interview with AP on Friday, Kerry kept it up: "The Republicans have tried to make a practice of attacking anybody who speaks out strongly by questioning their patriotism. I refuse to have my patriotism or right to speak out questioned. I fought for and earned the right to express my views in this country." Finally, a Democrat who has the guts to fight back!

The outrage over Kerry's remarks is ridiculous, and dangerous. It serves to show how narrow and bland our political debate has become. Let's look at what Kerry said: He didn't call for a coup d'état. He didn't say Bush should be impeached. He didn't say he should be tried for war crimes. He made a sort of joke about "regime change" -- at least it was characterized as a joke the first time he said it, several weeks ago at a convention of California Democrats, though no one pounced then.

With hindsight, at least, I might not have used the term "regime change" myself. It's maybe a little too flip -- and it predictably inflamed GOP loyalists, who are understandably sensitive to the fact that our president didn't win the popular vote.

But now House Speaker Denny Hastert is suggesting wartime is the wrong time to criticize Bush, period. "What we need is for this nation to pull together, to support our troops and to support our commander in chief," Hastert said. If only he'd told that to his buddy Tom DeLay when DeLay went after President Clinton during the Kosovo invasion. Here's DeLay at the time: "We have a president I don't trust, who has proven my reason for not trusting him: He had no plan. We have a civil war that was falsely described as a huge humanitarian problem, when in comparison to other places, it was nothing."

(And while we're talking war-related double standards: Imagine if any network besides Bush favorite Fox News had an embedded correspondent who revealed his unit's whereabouts on national television, and whose employers didn't pull the reporter immediately once the government asked it to. The GOP attack dogs would be feasting on the network's carcass already. Yet Geraldo Rivera remains in Iraq, continuing to serve up his gung-ho blather.)

We've seen a terrifying shrinking of the terrain of political discourse, if Kerry's wan remark can trigger the pile-on it has, without any real defense from other Democrats. Let me be clear: I'm not calling this a police state. I'm not comparing anyone to Saddam. No one is coming in the night to lock up dissidents. If people are being silenced, it's because they're being intimidated by political bullies, and we collude in our own intimidation. It wouldn't work nearly as well if liberals stood up and fought back. But mostly, they don't.

All morning I searched to find someone of national political stature who was publicly defending Kerry -- and found almost nothing. His chief liberal rival for the Democratic nomination, Howard Dean, pointedly chose not to whack him, which is not quite the same as defending him, but let's be grateful for small blessings. "I have not criticized Sen. Kerry for that, nor am I going to," Dean told reporters. "It certainly would be unusual for me to line up with Tom DeLay, and I don't intend to start now." Yet Dean's campaign director called Kerry's remark "flabbergasting" in the New York Post, and he derided it as an effort to pander to the antiwar vote.

I called Senate Minority Leader Tom Daschle's office on Friday to see if Daschle had any comment on Kerry's plight. So far, no one has called me back. I e-mailed the folks at MoveOn.org, which raised money for the congresspeople who voted against Bush's Iraq resolution last October, but haven't yet gotten a reply. Apart from former Georgia Sen. Max Cleland, who introduced Kerry at a dinner in Atlanta Thursday night, I haven't yet seen any prominent Democrat stand up and defend him. Cleland, of course, knows Republican thuggery firsthand: The Vietnam veteran who lost an arm and both legs in combat lost his Senate seat to draft-avoiding Republican Saxby Chambliss last year, in a vicious campaign that suggested Cleland didn't care about national security.

On Thursday night, Kerry reminded his audience of the way the GOP smeared Cleland. "I watched what they did to Max Cleland last year," Kerry said. "Shame on them for doing it then and shame on them for trying to do it now."

Shame on them is right. And shame on Democrats and the antiwar left if they leave Kerry standing out there by himself.