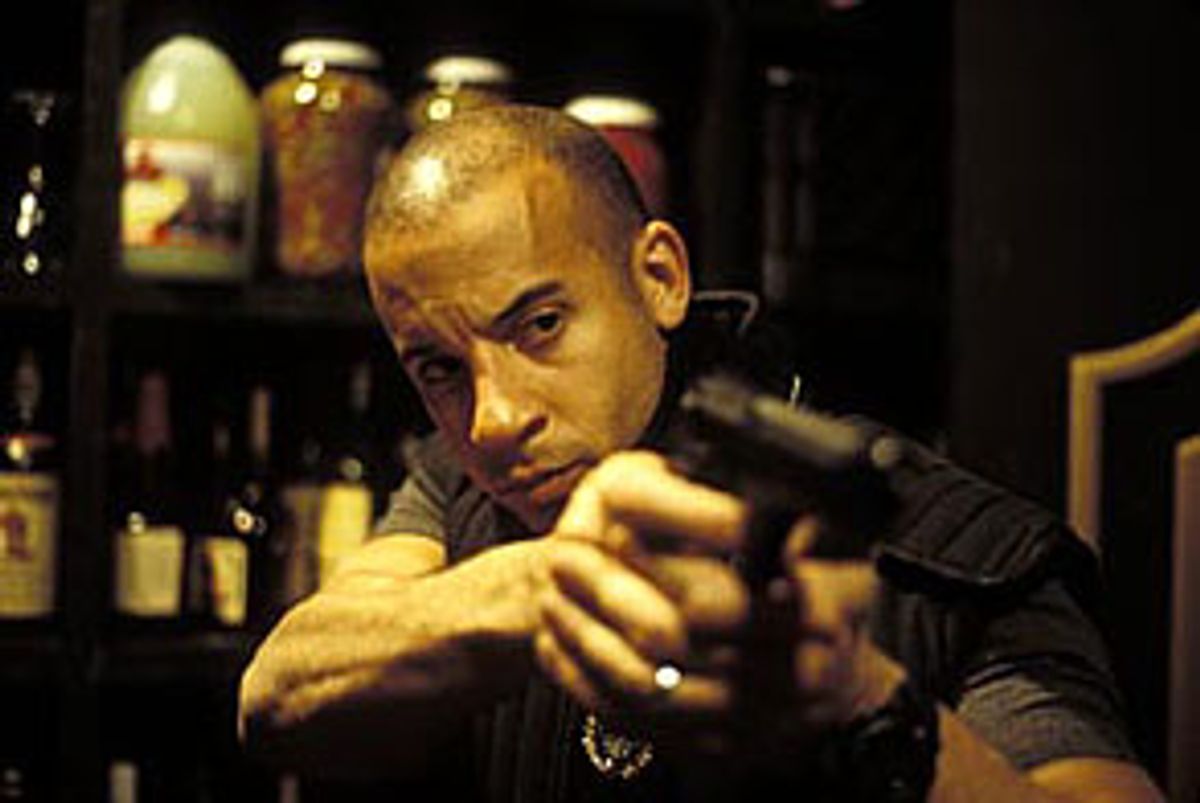 Action movies can be stupid, boneheaded, and absurdly impossible, but they should never be boring. That's hardly the only problem with Vin Diesel's newest vehicle, a busted old Firebird with too much primer on the fenders called "A Man Apart." It's also absurdly unlikely, mawkishly sentimental and almost incoherent at times. But who cares? The bottom line is that right in the middle of the movie's big gun battle, I found myself looking at my watch. Would I get out of this thing before the burger place closed?

"A Man Apart" is basically a revenge tale set somewhere on the backlot of the "Traffic" set. Diesel plays a DEA agent who uses streetwise tactics to fight the drug war along the Mexico-California border. We learn immediately that he's not the kind of guy who plays by the rules. (Are they ever?) He and his partner, Larenz Tate, are working with Mexican cops to bust a kingpin they've been tracking for seven years. When the bust finally goes down in Tijuana they, as Americans, are not allowed to have assault rifles like the rest of the Mexican cops. Diesel works his way around the prohibition with a little 9-millimeter friend. And of course he's the guy who nabs the baddie.

Then we're off to Diesel's beachside home in San Diego (I guess they pay DEA cops buckets of money, you know, so they're not tempted by the millions in cash they could get from scumbag runners for looking the other way). The next few scenes exist simply to establish that Diesel genuinely loves his attractive wife (Jacqueline Obradors), so much so that he kisses her under a beach sunset with the seagulls in the background. Even though you'll be trying to decide if you've ever seen a more clichéd representation of what love or marriage means, you still know that something's going to go horribly wrong.

And of course it does. That means that Vin Diesel has to figure out who did the bad thing. His thirst for revenge leads him to an unlikely alliance with the kingpin he busted at the start of the film, plus some old friends who work outside the law on special projects like this. All signs point to Diablo, a person or team or evil presence that is trying to take over the border's coke pipeline.

Look, I like Vin Diesel. He's a good, maybe great, action star. He's tough, cool and he gives off this impossible sense that he would have no problem kicking your ass, but he'd rather go snowboarding with you and grab a couple of microbrews, brah. As a straight guy, you don't even mind the idea of him busting out of his shirt. It's hot with all that fire and explosion and gunplay, you know, and it was in the way.

To be fair, Diesel isn't bad in "A Man Apart." He's always forceful, and he manages to communicate a sense of dazed anger, a mien to match his scruffy facial hair. It's just that the script is never really there for him. He has to go outside the law? Well, isn't that what drug-cop action stars like him always have to do? There's a double-, maybe triple-cross betrayal among dealers? We weren't supposed to believe them, were we?

Diesel never takes off his shirt in "A Man Apart." He bitch-slaps a Porsche-driving playboy called Hollywood Jack (who's probably gay), he handles an array of weaponry and he fucks up some scumbags, but there's not a single moment when you wonder what might happen next or when the spectacle simply leaps off the screen. You've seen it all before.

Me too, but "A Man Apart" wasn't a complete loss. The burger place was still open, and the fries were delicious.