Kiefer Sutherland is on the line, and he'll say anything to Colin Farrell to steal 80 minutes of your precious time. Just hang up! 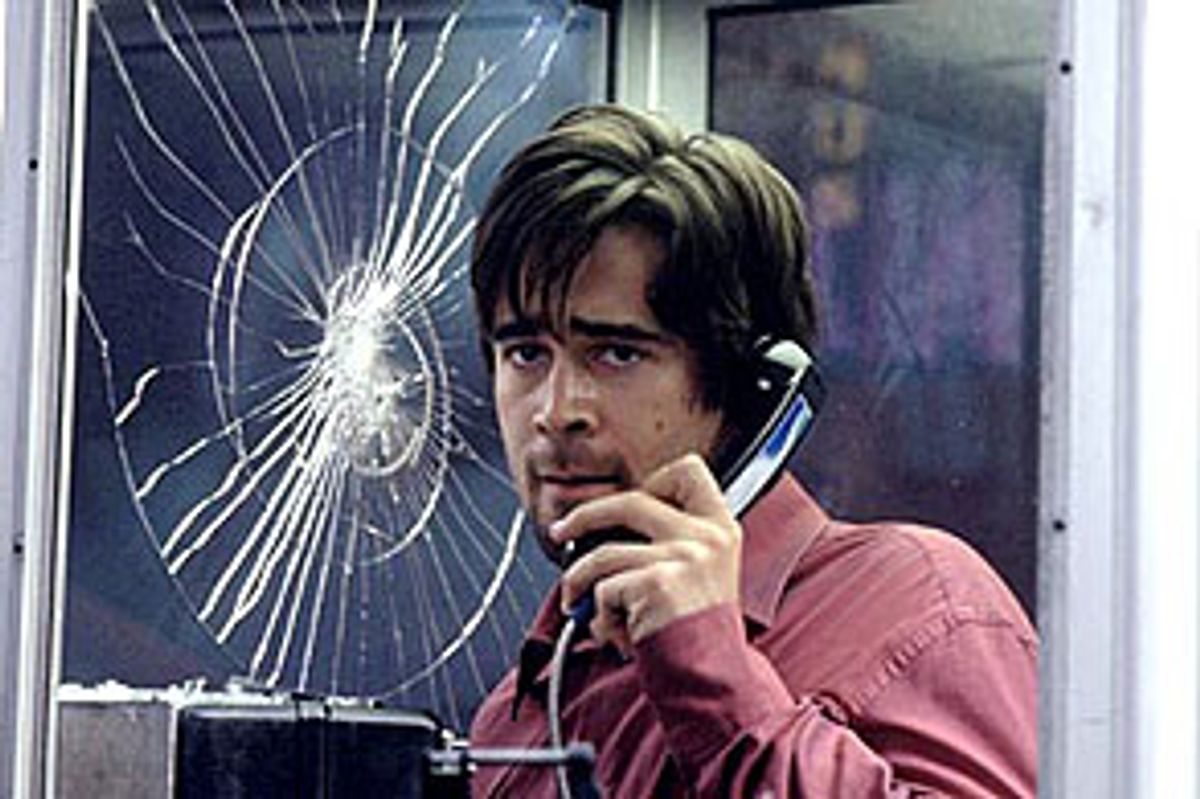 Picture this scene: A conference room, somewhere in Los Angeles, where a bunch of studio execs are listening to a guy pitch a movie about a slimeball Manhattan P.R. hustler dude who gets pinned down in a phone booth -- not a kiosk or a plastic bubble, an actual, old-school, glass-walled, accordion-door phone booth -- by a vengeful stalker with a long-range rifle. The way I figure it, at some point in the scene one of the execs leans forward and says, "Hang on. When is this movie happening, 1987? There are no phone booths left -- not in New York and probably not anywhere else. And doesn't this guy have, like, five cellphones? Unless he's dealing coke, he wouldn't be caught dead on a pay phone. Ha ha."

But nobody said that -- they were too busy imagining their co-workers in leather underwear, or wondering how much it was gonna cost to get the pool motor unclogged or whatever -- and so we have "Phone Booth," a movie that's laughable without, alas, even being enjoyably awful. It spends its first five minutes apologizing for its own existence: A voiceover narrator shows up to tell us that, hey, this is actually the very last phone booth in Manhattan, and Stu Shepard (Colin Farrell) is actually the very last guy who will ever use it. It's pretty much all downhill from there.

Like so many Hollywood movies, "Phone Booth" takes decent or at least enjoyable actors and the glimmer of an interesting situation and squanders them in a mash of forced psychological drama and phony, weepy sentimentality. It's the latest piece of hackwork from director Joel Schumacher, whose career of slick, pseudo-meaningful crap ("St. Elmo's Fire," "Falling Down," the execrable "8MM," the dismal third and fourth entries in the "Batman" series) has long held a kind of sick fascination for me.

In his profound shallowness, Schumacher represents something fundamental about American filmmaking. He has a decent eye and a reasonable facility for the medium; or, to put it another way, he's never embarrassed to rip off directors better than he is in order to seem up-to-date. (The touchstones here would be David Fincher, Mike Figgis and the creators of the Fox TV series "24.") He can work actors up into a froth of intensity, and here he gives us Farrell in a sweaty, bellowing, emotive performance and a semi-OK Bronx accent, both seemingly borrowed from Al Pacino in "Dog Day Afternoon." What Schumacher lacks is any idea whatever about life and the world; his movies all take place in some kind of fake-o, sealed-off Movieland, more claustrophobic than that phony phone booth.

I guess this won't matter to people who don't live in New York or who never go there, but the "Manhattan block" where most of "Phone Booth" is set is thoroughly bogus. (It was shot in downtown Los Angeles, and I kept hoping that in some shot they'd forget to mask the palm trees.) More to the point, it's bogus in a way that appeals to the audience's worst prejudices about what urban life is really like, much as "Falling Down," Schumacher's white-man-in-multiculti-L.A. nightmare, did. "Phone Booth" is supposed to take place at 53rd Street and Eighth Avenue, in actual fact a mixed-to-middle-class neighborhood of placid shops, restaurants and condo towers. Here, though, it's a desolate zone of sex shops, skanky hookers and conniving street merchants, where a brutal midday brawl involving five people and a baseball bat attracts almost no attention. This was made by people whose ideas about New York come, at best, from "Taxi Driver" and "Bonfire of the Vanities," if not from mid-'70s Charles Bronson movies.

All right, there is a movie here to talk about, sort of. Big-talkin' hustler Stu goes into that fateful phone booth to call his girlfriend, because he's married and his wife (Radha Mitchell) apparently spends her leisure time reading his cellphone records. (And then what? She calls all the numbers to find out who they are? She's a bigger wacko-wife than Lili Taylor on "Six Feet Under.") But because this is a Hollywood movie and Farrell has rather suddenly become a big star, his character's not even all that much of a scumbag. The girlfriend (Katie Holmes) is really more of a crush, and although he hasn't told her he's married he also hasn't slept with her or kissed her or, as far as we can tell, even held her hand and told her that he kinda likes her. If this level of almost-innocent flirtation is enough to get the psycho-stalker snipers of the world on your case, we're gonna need a lot more of them.

Anyway, someone phones Stu on that phone-booth phone after he's done spooning with Katie Holmes, and it's the unmistakable voice of Kiefer Sutherland (a Schumacher veteran from his long-ago starring roles in "The Lost Boys" and "Flatliners"), doing a sort of unhinged, "I know something you don't," Jack Bauer-turns-homo-psychopath routine. This is enjoyable for a few minutes, but the sheer stupidity of a mystery sniper making Stu call Katie Holmes back and tearfully confess his wedding-ring status quickly grinds you down. Pretty soon somebody's dead and cops, those scagly hookers, some TV crews and the wife and girlfriend have the phone booth surrounded, convinced that Stu's a killer.

It's another one of those faux-gripping hostage-drama scenarios Hollywood rolls out every so often so it can act like it cares about current events and the power of the media and "regular people." Usually they're crappy, like "John Q" and "Mad City," and even when they're better, like "The Negotiator" or "Dog Day Afternoon," they're still not actually that great. Schumacher and screenwriter Larry Cohen have to keep piling implausibility upon implausibility: The sniper won't let Stu hang up or leave or tell anybody what's going on, and forces him to say really mean things to a sympathetic cop (Forest Whitaker) who begins to suspect the truth.

Anyway, what is the truth? Is crazy Kiefer going around Manhattan with a hunting rifle, making guys confess their not-very-interesting private lives to whomever? Screenwriter Cohen is a semi-legendary Hollywood figure whose films as a director have included the low-budget horror classics "It's Alive!" and "Q" and the blaxploitation faves "Black Caesar" and "Hell Up in Harlem." I can't help suspecting that his original script had somewhat more dramatic urgency, more of that B-movie smell of sewage and desperation, if nothing else. Maybe Stu was older, sleazier, more desperate and not as likable. Maybe he actually had a secret to spill. All we've got here is a cute yuppie stuck in a phone booth with bad facial hair and a bad American accent, trapped by a director who's just smart enough to know he can fake it for 80 minutes and people will think it's a movie.