After 33 years, Snuffleupagus isn't imaginary and Elmo gets too much airtime, but the best kids' show ever still educates with honesty, humor and loads of charm. 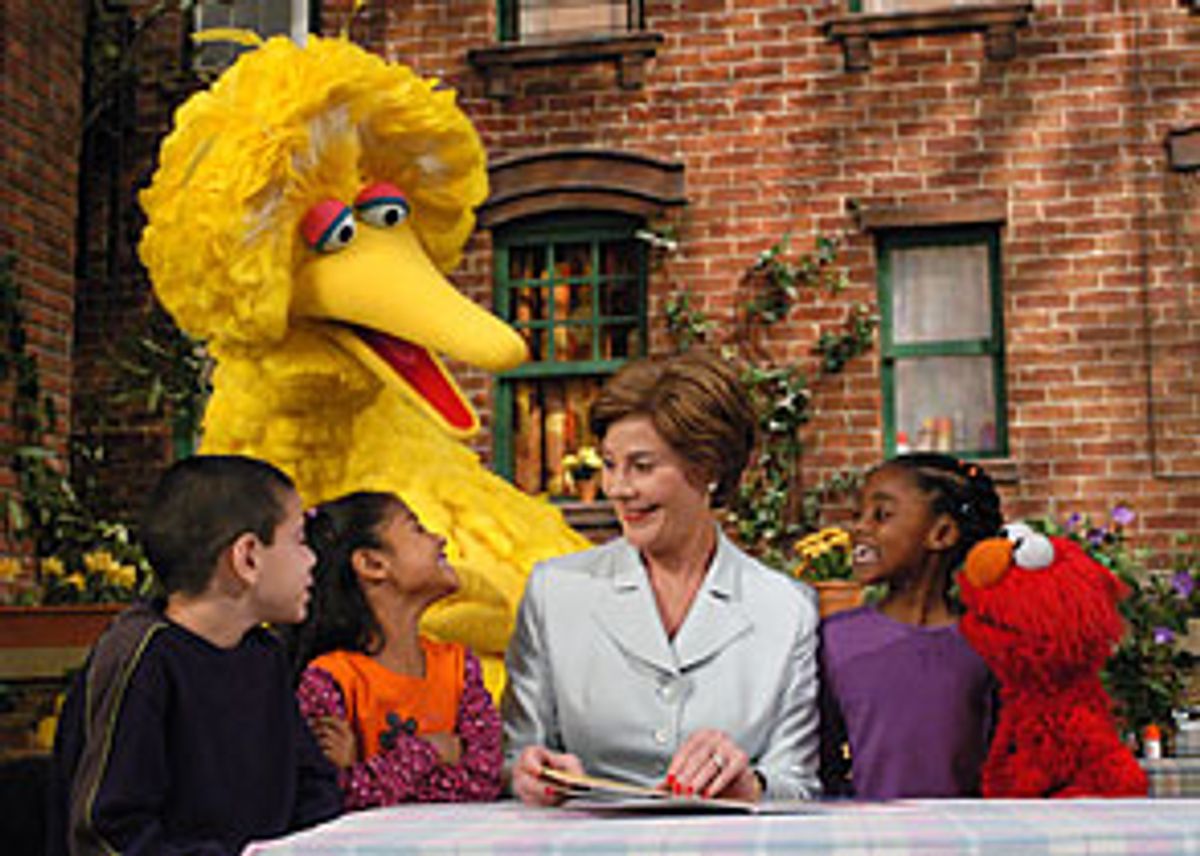 The way a person interacts with a Muppet says a lot about them. Some seem totally calm and relaxed -- they're not bothered by those intense, google-eyed stares and all that furry arm-waving hysteria. Others become stiff and self-conscious around 2-foot-high orange guys with tufty hair, and grouchy trash-can dwellers. They reach out to touch the little buggers, but you can see that they don't mean it. They stutter and their eyes are trained on the cue cards like bad "Saturday Night Live" guests.

Who can forget John Denver, sitting among happy-faced, swaying plants on "The Muppet Show," singing "Inch by inch, row by row, gonna make this garden grow"? Denver clearly felt at home among the Muppets, as did recent "Sesame Street" guests the Dixie Chicks. U.N. Secretary General Kofi Annan seemed a little stiff around all that foam and fur, but he may have had more important things on his mind. Plus, that floaty, "Animal"-style fur can be particularly distracting. And when you consider that the Muppets have met and mingled with everyone from Gene Kelly to Joan Baez to Arlo Guthrie to Liberace, it's easy to understand why they might be a little intimidating.

The 34th season of "Sesame Street" premieres Monday on PBS, offering more chances to peer into the souls of a whole new bevy of guests, from Sheryl Crow to first lady Laura Bush. The show has also added new features, aimed at increasing children's awareness of other cultures. In "Global Grover," the shoulderless blue one appears in costumes from around the world and narrates short documentaries about children from different countries. Kids at home can watch a Malaysian boy make a kite, some Egyptian kids milking a goat, and a Russian boy learning a traditional dance. Presumably, international versions of "Sesame Street" feature American children playing Nintendo and shoving their faces full of McFreedom fries.

Watching "Sesame Street" for the first time in probably 20 years, it's not difficult to see why the show has won more Emmy awards than any other show in television history. Unlike the dorky songs and dances of that cloyingly sweet curse, "Barney and Friends," "Sesame Street" manages to tackle challenging issues with honesty, sensitivity and style. When the actor who played Mr. Hooper, Will Lee, died in 1982, instead of using another actor or pretending the character had moved away, the show used it as an opportunity to teach kids about accepting death. A South African version of the show even features an HIV-positive Muppet, a fact that made a handful of American politicians sweat last year over the possibility that the character would appear in the U.S. Yet, such a character makes perfect sense in South Africa, where an estimated one in nine people is infected with HIV.

And no matter how difficult a topic "Sesame Street" is tackling, its skits are entertaining, funny and sometimes slightly ironic. On a recent show, Big Bird meets his pen pal Gulliver, a seagull who turns out to have a serious prejudice against non-birds. "Boy, there sure are a lot of people and monsters on this street," he tells Big Bird, who obliviously replies, "Yeah! Isn't it great?" Finally, when Gulliver confesses that in his neighborhood, "birds only play with birds," and asks Big Bird and Snuffleupagus what they could possibly do together, Big Bird replies, "Well, we're very big on the alphabet, aren't we, Snuffy?" The show is so clever and goofy that it can get the squarest message across without seeming overly scholastic or dorky.

Not surprisingly, after 33 years on the air, some things have changed. The Count, who used to roam Sesame Street like a vampiric accountant on mushrooms, counting things and exclaiming his love of counting with equal vigor, seems a lot less weird now. He plays the organ and introduces the "number of the day," interrupting his work to exclaim, "The suspense is killing me!" Granted, once the number is introduced, strange characters enter the scene to illustrate what that number of things looks like. In one skit, "13 dancing wegetables" were introduced, and proceed to bounce all over the place, singing, "Gotta dance dance dance! Gotta dance dance dance!" In other words, the Count's scenes are still bizarre.

Which makes sense, because kids love bizarre. Kids also love grumpy, but unfortunately, the grump factor seems to have died down a bit. With Mr. Hooper gone, and with less frequent (and less angry) appearances by Oscar the Grouch, the show seems to have a little bit less fun with griping and growling than it did years ago. And unfortunately, the absurdly grating Elmo is omnipresent, spewing out that chafing baby talk and referring to himself in the third person like Bob Dole. Plus, there's much more cheerful, handshake-y, "I'm OK, You're OK" action all around, like the show might be taking a few hints from the popularity of Barney's "I love you, you love me" sapfest. Then again, Barney is a rock star among kids under 5 -- I once mentioned to a 4-year-old that Barney was my uncle, and his eyes bugged out like he was in the presence of a celebrity.

Not that the opinion of someone who habitually lies to kids should count, but I'm glad to see that the show still includes old clips of Bert and Ernie bickering at each other, distinguishable by the fact that Ernie's voice has that recognizable nasal twang that could only be Jim Henson's (Henson died in 1990). In one such clip, Bert and Ernie are asleep in their matching twin beds, and Ernie wakes up Bert, whose half-awake grumblings are absolutely hilarious.

Ernie: "I was just thinking of some of the things you can do with your head, Bert."

Ernie: "And I was just thinking of some of the things that I remember best. Things that I like to remember, Bert."

After reacquainting myself with so many old familiar faces and such ridiculous skits that range from hysterical to downright strange, and from entertaining to oddly touching, I have to agree with Ernie. I like to remember "Sesame Street." Here's hoping Bert and Ernie and Grover and the rest of the manic Muppet crew will be around for decades to come.