"Not every question has an answer"

Rosanne Cash talks about her ailing dad, the Dixie Chicks and the war, losing her voice and the new album that helped her find it again. 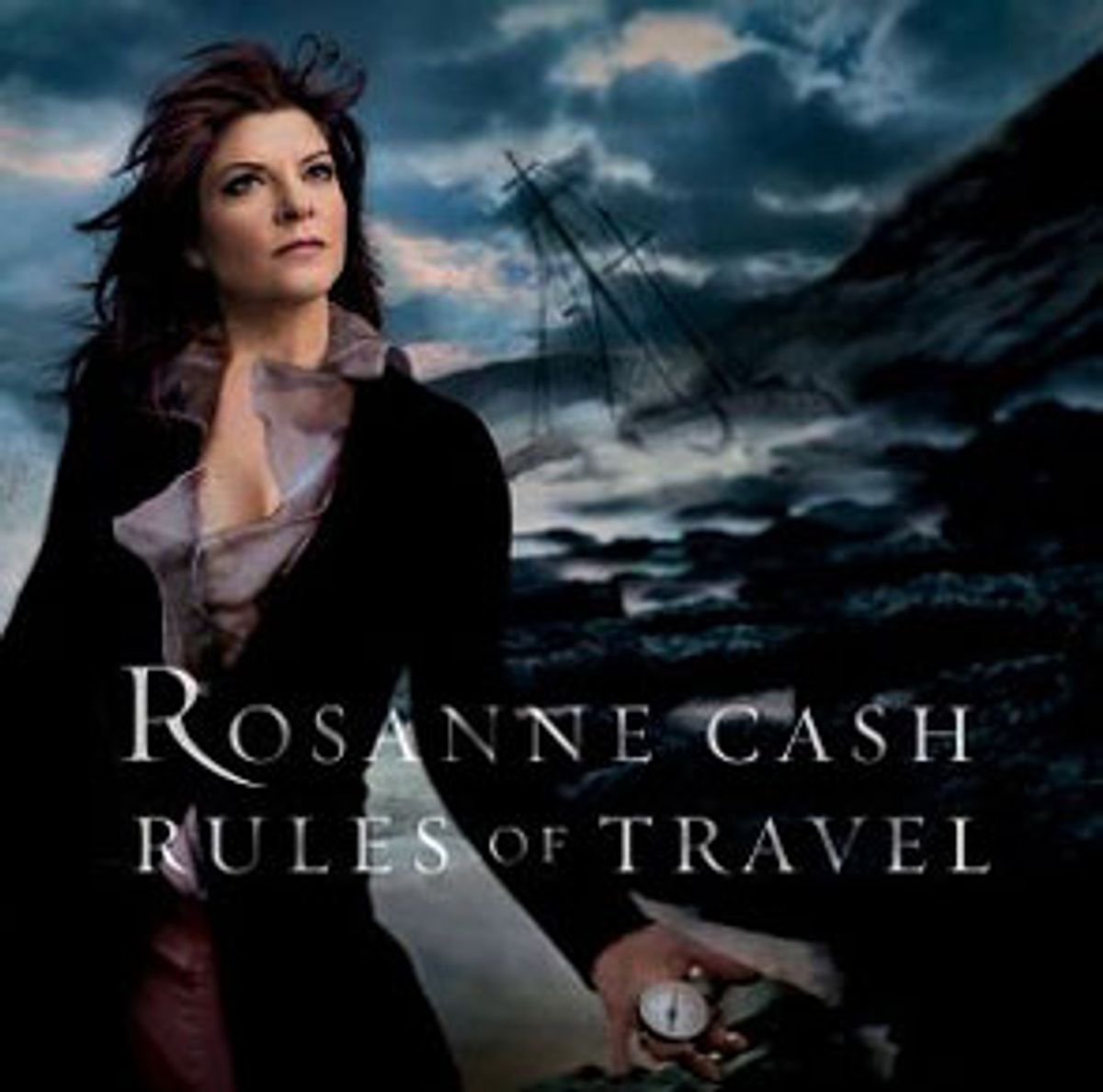 Fans have waited a long time for a new Rosanne Cash record. Produced by her husband, John Leventhal, "Rules of Travel" draws stylistic influences from throughout her career, from the "Seven Year Ache" of the '80s through the '90s confessionals "Interiors" and "The Wheel." It also features, for the first time, a duet between Cash and her father, the one and only Johnny Cash. On an early day of the war in Iraq, when the television networks were still showing reports of bombing and invasion 24-7, Cash and I settled in for a chat on the phone. Although it was difficult to avoid talking about the war, we managed to find time for the new disc, her long silence, dad Johnny's political legacy and how she lost her voice -- and then got it back.

What a strange time to do this interview.

I know. I feel, actually, it's somewhat ludicrous to be talking about a record. I mean, I'm really heartsick, and I can't stand CNN, although I have it on right now. I'm going to turn it off now. I think they're part of the problem. They take 30 seconds of important information and stretch it into six hours.

They just shouldn't exist. We should go back to the days when there was no news! Let's try to talk about "Rules of Travel."

The week before last, I was on a road trip, and it was such a great driving-down-the-highway kind of record. Not every record works that way.

That's good to know, since I rarely drive. I won't have a chance to find that out.

That's because you're a New Yorker now. How long have you lived there?

Any regrets about that decision?

No. Not for a second.

Then what took you so long?

But you were heading to New York the whole time?

I think so. Even when I wasn't conscious of it. I wanted to leave Nashville for about five years before I actually did.

It's taken a while for this one to come out, in part because you lost your voice for a few years.

Yeah, I had vocal polyps. That's part of the reason. And I had a lot of stuff going on. I did the demo record ("10 Song Demo," released in 1996) and then there was just a lot of other stuff that didn't involve music. My life was just unfolding and I didn't feel that I had to make a record. But then when we first started working on this, I lost my voice for two and a half years. So it's been seven years.

Was there a reason your voice went out like that?

I was pregnant, and I had these hormone-related polyps. The hormones of pregnancy just made them grow until I couldn't speak. I was just a rasp. I had no volume. It was like having a really bad case of laryngitis for two and a half years. The first year I was kind of like, "No big deal, I'm having a baby, I want to spend time with the baby anyway." And then the second year I started getting a little concerned. And then I had a full-blown identity crisis.

What did that involve?

Well, I had never really thought that I identified myself as a singer. I thought of myself as more of a songwriter. Singing was just an addendum. I was struck by the sense of loss at not being able to sing. I was so sad about it. My self-esteem was pretty shaken. So I thought, if I get my voice back, I'm going to enjoy it.

Well, it sounds great on the record. It sounds like old Rosanne Cash. Pre-"Interiors."

Particularly "Closer Than I Appear." That could have been on "Seven Year Ache." But lyrically, I think it is more mature.

Lyrically it is more grown-up, but there's a sense of fun, even when the lyrics are serious. It's an entertaining record. "Interiors" is one of my all-time favorite records, but it's not available anymore.

It's not? Did you check on Amazon? Interesting. I'm going to have to call Sony about that.

You've written short stories too, and done a collection of them. I was wondering about the difference between assembling a collection of prose and assembling an album of songs. You include outside compositions on this one. How do you go about choosing the material that isn't your own that you are going to include?

Well, for the Craig Northey song ("Beautiful Pain") and the Joe Henry/Jakob Dylan song ("Hope Against Hope"), we asked them to write something for me. And that's what they sent. There's always that moment when you go to put the tape in and think, "God, am I going to like it?" They were both perfect. I was so gratified. And I knew "Three Steps Down," but it was kind of a druggie song and I really didn't want to do that because I hate drugs with all my heart. So they changed the lyrics so that it's more a relationship song. But it was a mood I didn't have on the record.

What about your dad? How is your dad, anyway?

He's better. He's in the hospital now and I just got back from Nashville seeing him, but he's better today. He's going to be fine. He had another case of pneumonia.

Everyone seems to be getting it these days. I've had young friends with two-month bouts with pneumonia.

The whole world, it seems. I had a bronchitis/pneumonia last year. It's weird, isn't it? I think it's partly New York, what we were breathing in after 9/11.

What about having your dad on the record? You duet on "September When It Comes."

I did not intend that. I recorded the song by myself. And John said, "You should ask your dad to sing on this." I was really resistant at first. It was a knee-jerk reaction at first, because that's what I've always done in my career: I don't want to use my dad, I don't want to invite comparison. John said, "You have to look at the song. It's perfect for him." And it is. I'm so glad I waited for this song at this time.

Where did those lyrics come from?

Well, when he was first sick, and you get that first glimpse of your parents' mortality. It was inspired partly by that and partly by the knowledge that maybe you just get when you are older that not every question has an answer, that maybe some things you just need to close the door on and they will be unresolved forever. It's not necessarily bad; it's just the way it is.

Then there's "Closer Than I Appear." I love that song.

That's the oldest song on there. "I learned a lot of rules of what a man is made of ..." I thought I'd written it for a man to sing, but I couldn't get any men to sing it! So it just languished for years. It just wasn't working. We tried a lot of different arrangements and now I'm happy with it.

[Call waiting interrupts, briefly.] That was the guys at MoveOn.org, the antiwar group I'm a part of. People are getting beaten up for saying they oppose the war.

I've been wanting to ask you about this ...

I was talking to Janeane Garofalo the other day, and we're both concerned about poor Natalie Maines [of the Dixie Chicks]. What can we do to help this poor girl? I could not believe when I was in Nashville last week what they are doing to her: tractors running over the records, insisting that she go on TV to recant ...

And then she did go on to make some apology, which pissed me off!

I know, it pissed me off too, but I also understood it. Just don't say, "I was wrong." I think she's sort of out there alone and I think she's probably scared to death. I mean, I'm used to getting hate mail. [Laughs.] She's not.

It annoys me to no end when people think it's OK to express their own point of view, but someone with a different point of view shouldn't say it. Particularly if that person has the ability to get attention. Why, because someone is famous or accomplished, does that mean they can't have a point of view?

I just wrote a column for my Web site and I said, "Why can't teachers and plumbers and musicians all have an opinion?" The people who scream the loudest about the American way and freedom, they seem to be the least tolerant about different opinions.

We've gotten back to the war now, haven't we? So what are you doing about it?

What I'm doing now is having the courage of my convictions, which is to say I'm against it and to say why -- because I really think my grandchildren are going to be cleaning up this mess and I have to face them. I have to at least be able to say, "Well, I was against it." That's the way I was brought up. My dad opposed the Vietnam War; that was very unpopular. My dad took on the Ku Klux Klan. He never backed down. You know, ultimately I have to be able to look at myself in the mirror. If you don't have the courage to say what you believe, then what good are you?

As far as what active things we can do? At this point we're all a bit dispirited, but there's talk of a concert at Madison Square Garden in the next couple of weeks, to fund humanitarian aid.

Are you doing anything to promote the record now?

Talking to you. Talking to a few other guys. Not a lot until summer, when my little boy gets out of school. We're filling in the [tour] dates now. West Coast. England. It's fun in summer with all of these festivals outside.

What do your kids think of you?

[Laughs uncontrollably.] What a loaded question to ask a mother! Actually, my daughter Chelsea answers my fan mail. And she came across some really rabid hate mail. And she's not supposed to do this but she wrote one of them back and said, "If you ever talk to my mother like that again, I'll hunt you down." [Laughs.] She said, "I'm not peaceful like she is."

And I said, "Chelsea, oh my God, you shouldn't have done that. You didn't say you were going to kill him did you?" She said, "No, I just said I'd hunt him down."

She knows where to draw the line.

I have so much fun with my kids. They were such horrible, evil adolescents; I didn't think any of us were going to make it through it. But they've each turned into the most incredible women. Of course, the youngest aren't through it yet, so we'll see what happens with them.

There was a lyric on the record that made me think, "What would a kid think if it was their mother singing this?"

Was it "Next time a woman's on her knees, don't try to make a deal"? You know, they know I'm a writer, and they grew up with it, and they all think like artists. They're very broad-minded kids. I got permission from each of them to get arrested for civil disobedience if I have to in the next couple of weeks.