"Ghosts of the Abyss"

With an overblown techno-spectacle in giant 3-D IMAX, James Cameron disgraces those who died on the Titanic -- again. 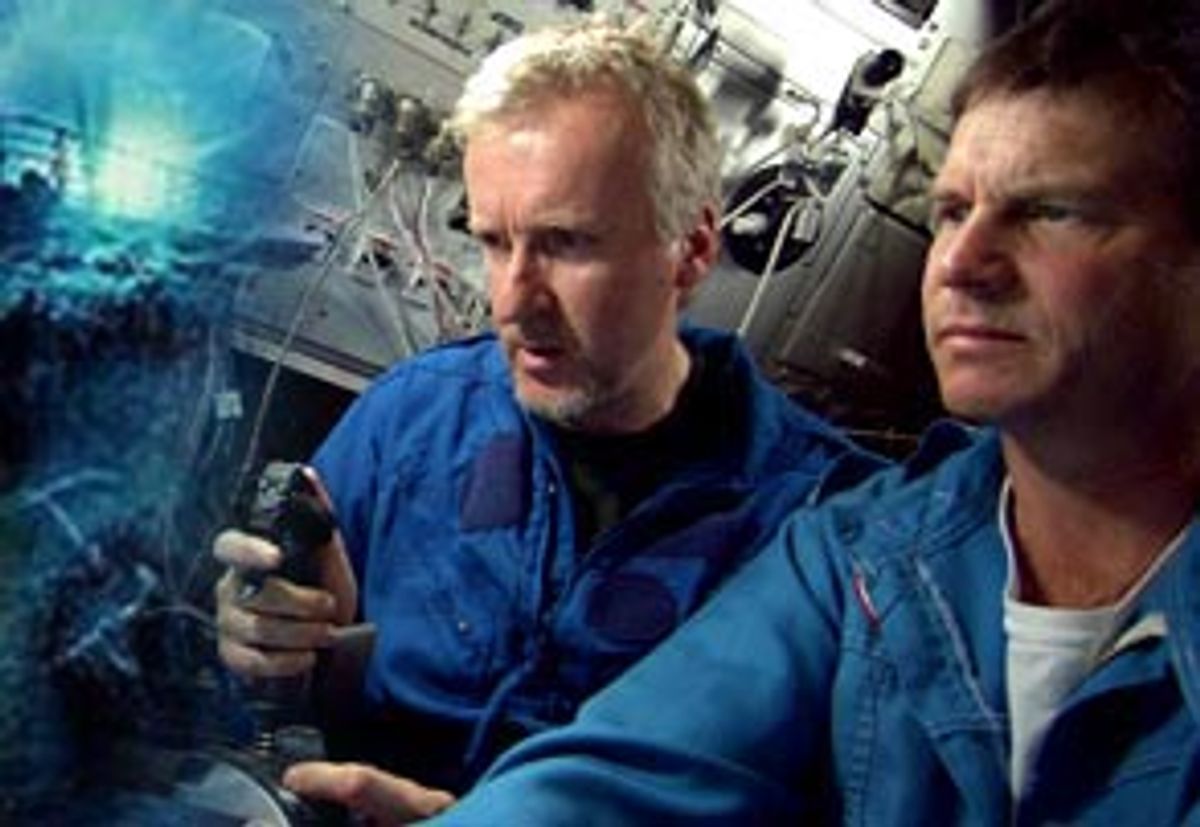 "Like antiquing among the dead" is how a friend of mine described James Cameron's 3-D IMAX documentary "Ghosts of the Abyss." Not content with having used one of the tragedies of the ages as grist for a special-effects extravaganza, Cameron, in 2001, returned to the site of the sunken Titanic with an expedition (and one of the stars of "Titanic," Bill Paxton) to make this hour-long footnote.

Reviewing an IMAX film in aesthetic terms is like trying to discuss Mount Rushmore as a piece of sculpture. IMAX isn't about anything having to do with craft. It's about sheer spectacle, and in that sense, it's the perfect metaphor for what mainstream movies have become. Because "Ghosts of the Abyss" is in 3-D, you sit in front of the enormous IMAX screen wearing big flat-front black glasses that look like Yoko Ono's castoffs. The image is fuzzy and indistinct except in the dead center of the screen. The only way to see the movie in focus is to watch it with one eye shut.

The 3-D effects are not in any significant way different from the scene in "House of Wax" where the national paddleball champion aims his rubber ball right at the camera. Enormous metal pincers seem to hover a few inches from your nose, crew members toss tools toward the camera, and the audience ducks and laughs. At least "House of Wax" was made by people who knew they were working with a gimmick and had some fun with its sideshow novelty -- and that was in 1953. James Cameron has no such awareness. He demonstrates no inkling that the lyricism and magic of movie imagery is a different thing than the spectacle he puts on the screen.

And when you apply that sensibility to the grave site of the Titanic and the 1,500 people who lost their lives on it, the effect is truly obscene. To say that Cameron has no sense of occasion or place is to be kind. Watching Cameron go down in the submergible crafts, using a laptap to direct the movements of two specially constructed camera "bots" (two boxy structures tethered by fiber-optic cable that allow them to snake around the corridors of the sunken ship), we're watching a kid playing video games at a tomb.

We do get to see some potentially amazing sights: the leaded stained glasswork in the windows of the Titanic's dining room; the ribbon-patterned carving still visible on a fireplace; the barnacle-encrusted iron grillwork on the gates of the two first-class doors. But there's nothing in "Ghosts of the Abyss" or, I'd venture to say, nothing potentially within James Cameron, to equal the simple ghostly poetry of the images shot by the explorer Robert Ballard on his exploration of the wreck site. (The images were included in a great four-hour A&E documentary shown on the network just before the 1997 release of "Titanic.")

Cameron's work is the best demonstration we are likely to get of what technology can't buy: the delicacy of feeling, the simple and profound human ability to respond with reverence, awe and sorrow that suffuses every frame of Ballard's video footage. Cameron thinks it's appropriate to show Bill Paxton's nervousness at going so far into the deep, or the actor later reaching for a sick bag as the craft he's in reemerges in choppy seas, or to turn the possible loss of one of his bots into a mini salvage adventure, or, most sickeningly, to note that one of the explorations occurred on Sept. 11, 2001, and then show us footage of the crew in shock, while on the soundtrack Paxton muses about how suddenly the expedition seemed unimportant. (Nothing like two tragedies for the price of one.) And through it all, there's Cameron, in his Marines T-shirt or expedition uniform, stone-faced, playing the movie director as great white explorer.

It's not just Cameron's deadhead insensitivity that keeps you from seeing the potential beauty of the images. He keeps laying in ghostly images of actors done up in period costumes over his footage of the wreck. And when they won't suffice, he includes clips from "Titanic" itself. I can understand the need, perhaps, for computer-generated animations of the ship's interiors to orient us to what we're seeing in the decayed hulk of the Titanic's interiors. You can't help being affected when you see a man's bowler hat still sitting on the dresser in his stateroom. But those damn ghost images keep coming, a sign of Cameron's hubris that he thinks his crappy images can compete with shots of the sunken Titanic.

I understand that millions of people were affected by Cameron's "Titanic." Movies get around our defenses, and that one was so big, so overwrought, that you didn't have to be stupid or insensitive to get sucked into it. But there's something appalling in hearing the movie celebrated as a great romantic wallow by anyone whose mental age has progressed beyond 12. Why, when the actual stories of the people on the ship are so compelling, so heartbreaking, do we need to invent a pair of star-crossed lovers for the audience to weep over? Will we, in 50 years' time, be asked to weep over a pair of new young stars playing lovers who discover each other as they try to escape from the burning twin towers?

I don't invoke that image lightly, but I want to make clear the enormity of the history that Cameron abused in both "Titanic" and this overgrown gimcrack short subject. The final insult is the title that appears on the screen at the end: "In Memory of Walter Lord." Lord, who died last year, was the British writer whose slim little book "A Night to Remember" remains the standard account of the ship's sinking. It was also the basis for the great 1958 British film of the same name. (Cameron must have liked it; about a third of the dialogue from Eric Ambler's sceenplay turns up, uncredited, in "Titanic.") Lord's book has been a fitting memorial to the Titanic for years. To see him paid homage by the opportunist Cameron is like seeing a gob of spit land on a gravestone.