Your glow stick could land you in jail 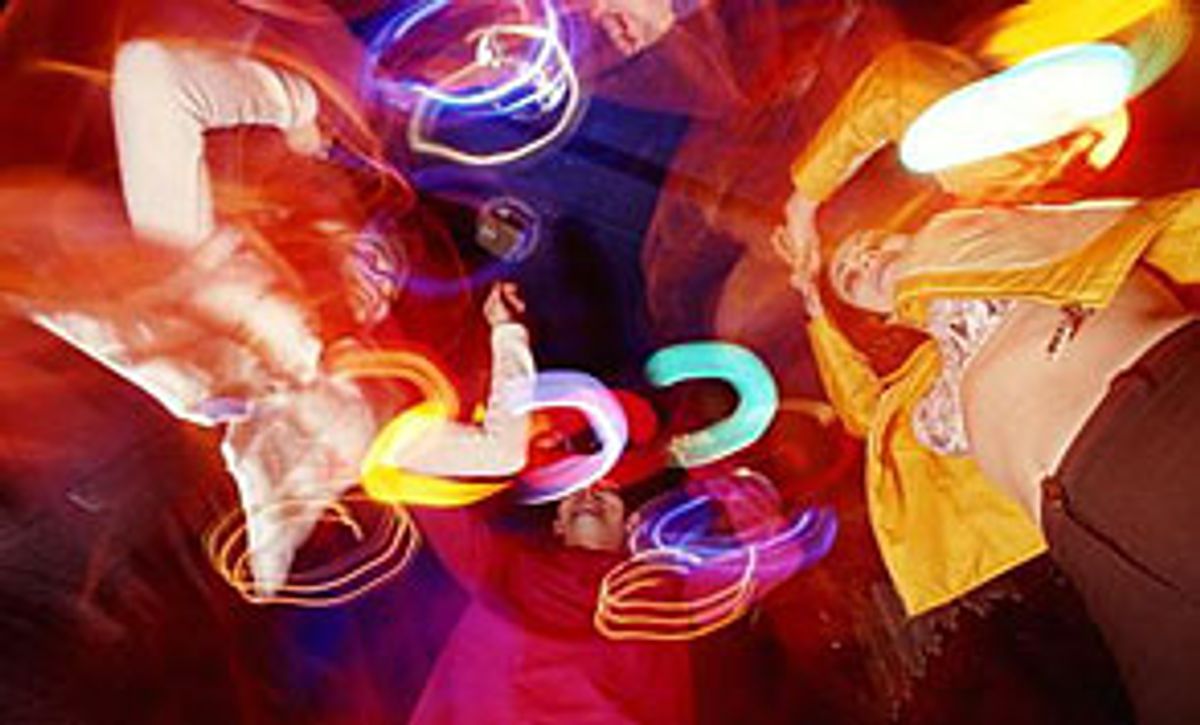 Last Thursday, the House and Senate almost unanimously passed the National AMBER Alert Network Act of 2003, a popular bill that will soon create a nationwide kidnapping alert system. Coming in the wake of a year of high-profile child abductions -- from Elizabeth Smart (whose parents supported the bill) to Samantha Runnion -- the bill was a no-brainer, destined to pass quickly and smoothly through Congress.

Surely Sen. Joe Biden (D-Del.) knew this, which explains why he cannily sneaked his own, completely unrelated legislation into the AMBER Act just two days before the vote. Piggybacked onto the act was the Illicit Drug Anti-Proliferation Act, a thinly veiled rewrite of legislation that was controversial in 2002 and failed to make it to a vote on the Senate floor. Now, club owners and partyers alike are being subjected to a loosely worded and heavy-handed law that authorities will be able to indiscriminately use to shut down music events at any time they please, assuming they find evidence of drug use. Thanks to Biden's surreptitious efforts, a few glow sticks and a customer or two on Ecstasy could be all it takes to throw a party promoter in jail for 20 years.

The passing of the Illicit Drug Anti-Proliferation Act was sudden but not entirely out of the blue. Last year, the Illicit Drug Anti-Proliferation Act was known as the RAVE Act (the leadenly acronymed "Reducing Americans' Vulnerability to Ecstasy Act"), a piece of legislation designed by Biden in early 2002 to put rave promoters out of business. An expansion of the crack-house statute of 1986 -- which made crack-den proprietors liable for what took place in their homes, even if they didn't deal drugs themselves -- the RAVE Act threatened those who "knowingly and intentionally rent, lease, profit from, or make available for use, with or without compensation, [a] place for the purpose of unlawfully manufacturing, storing, distributing, or using a controlled substance" with 20 years in jail and $250,000 in fines.

In English, this meant that anyone who intentionally let people do drugs at their events could be held liable. It also expanded the crack-house statute in two significant ways: Now the law could be applied to one-night events -- concerts, raves, parties, festivals -- as well as permanent locales like nightclubs, and it added civil penalties for violations, lowering the burden of proof from "beyond reasonable doubt" to a "preponderance of evidence."

So what "preponderance of evidence" would authorities use to determine that the people who threw these parties "knowingly" let their customers and guests use drugs? The RAVE Act offered a handy list of "findings" that authorities could use as proof -- including the presence of "overpriced bottles of water" and chill rooms, and the sale of glow sticks, massage oils and pacifiers (all of which are sometimes used to enhance the effects of Ecstasy). Never mind that all of the above can also be found at everything from 'N Sync concerts to an Earth Day festival; in the eyes of Biden and other like-minded officials and law enforcement officers (of which there are many), these are sinister drug paraphernalia that can only point to one thing.

Civil liberties groups and grass-roots activists from the electronic music community went on the defense. Infuriated ravers flooded Congress with letters, complaining that they were being singled out because of their lifestyle choices. The ACLU and the reform-minded Drug Policy Alliance convinced co-sponsoring Sens. Patrick Leahy, D-Vt., and Dick Durbin, D-Ill., that the vaguely written law could be used to limit freedom of expression and that businesses would unconstitutionally be held liable for their customers' actions. The two senators withdrew their support, and the RAVE Act finally died in committee last fall.

But Biden was not deterred, and he reintroduced the bill in early 2003. This time, in order to nominally appease detractors, he changed the name of his bill to the less inflammatory "Illicit Drug Anti-Proliferation Act" and struck the "findings" section of the legislation. Then he swiftly tacked it on to the AMBER Act, where, without any kind of hearing and before the ACLU and grass-roots organizations could raise a stink, it finally passed.

The bill's opponents worry that the new law (which will probably be signed by President Bush in the next few weeks) will effectively quash the electronic music community. Most ravers don't object to the targeting of unprincipled rave promoters who do sell drugs to kids, but the law is so loosely worded that it could be used against anyone who throws parties that are unpopular with local authorities. After all, according to the new law, you don't actually need to be directly involved in providing drugs to customers to be found guilty; all you have to do is knowingly allow drug use to take place.

The police are no doubt delighted to have a new weapon to use in their skirmishes with clubs and late-night revelers (a feud that goes all the way back to the days of Prohibition). Do the local authorities have issues with your nightclub or party? All they would need to do is find a few drug users at your event and "prove" that you endorsed this activity by pointing at, say, your overpriced bottled water or the ambulances that you keep on standby in case of emergencies (a common practice at concerts and nightclubs alike), and they could shut you down, throw you in jail, and empty your bank account.

Biden argues that this will never happen. "The purpose of my legislation is not to prosecute legitimate law-abiding managers of stadiums, arenas, performing arts centers, licensed beverage facilities and other venues because of incidental drug use at their events," he wrote when he introduced the Illicit Drug Anti-Proliferation Act. "My bill would help in the prosecution of rogue promoters who not only know that there is drug use at their event but also hold the event for the purpose of illegal drug use or distribution."

Unfortunately, precedents show otherwise. Biden's bill -- even with the findings removed -- formalizes what has been taking place in drug-enforcement circles for several years: Since 2000, authorities around the country have moved to shut down some of the nation's most popular dance parties, using the crack-house statue as a bludgeon and those glow sticks and chill rooms as their evidence. In many cities, such as San Diego and Fort Lauderdale, the police have even formed "Rave Task Forces" -- and study DEA-provided fact sheets that detail drug paraphernalia (sports drinks! lollipops! eye drops!) -- to shut down electronic music events and jail their promoters.

In New Orleans, for example, the promoters of one of the city's most popular dance clubs, Freebass, were charged with allowing drug use to take place at their events, despite an utter lack of evidence that they were in any way involved with or aware of drug sales. The promoters plea-bargained to avoid a costly lawsuit and ended up signing an injunction that forbade the presence of glow sticks, pacifiers, massage tables and chill rooms at any future parties (as if these were somehow to blame for the drug problem). And the Department of Alcohol and Beverage Control last week moved to shut down Ten 15 Folsom, one of the largest and most popular nightclubs in San Francisco, and accused the owners of permitting drug use to take place there. Once again, investigators pointed at the presence of glow sticks, as well as emergency medical technicians (which, ironically, Ten 15 had begun providing, by court order, after several overdoses by customers) as evidence that the club owners endorsed drug use.

The backward logic of this thinking punishes club owners and rave promoters for trying to keep their customers safe. It is inevitable that some revelers at just about any kind of musical event -- whether an Avril Lavigne concert or a techno dance club -- are going to bring and consume drugs, no matter how diligently you search their pockets or how often you eject offenders. Club owners and party promoters are aware of this (who isn't?) and often do everything they can to both limit this activity and prevent tragedies among those who pop pills anyway. It's quite possible that the Illicit Drug Anti-Proliferation Act will force panicky promoters to reconsider providing ambulances or EMTs, lest those be used as "evidence" against them. Already, many parties have stopped harm-reduction groups like DanceSafe from coming to their events to pass out safety literature or anonymously test Ecstasy pills to ensure that they aren't more lethal concoctions.

Once the president signs the bill, promoters may consider the risks and never throw parties at all. Others will simply move their parties underground to illegal locations (abandoned warehouses, empty buildings, remote fields) where they are less likely to be found by authorities but more likely to be providing an unsafe setting for their customers.

The law isn't limited to electronic music events, either. Civil liberties experts worry that it could be used as a tool of bigotry to shut down hip-hop or gay-circuit parties. In a worst-case scenario, the DEA could even bust you for a private barbecue in your home where friends light up a bong: After all, the new law covers private residences, too. That may be unlikely, but the DEA is no stranger to badly conceived drug raids.

No one is arguing that drug use doesn't take place at raves and nightclubs and concerts, that kids don't sometimes use glow sticks or pacifiers to enhance their high, or that drugs aren't harmful -- occasionally lethal -- for kids. But in its rush to stamp out America's current drug demon, Ecstasy, this sweeping and illogical legislation instead violates basic civil liberties and labels entire communities as the enemy.

All these concerns may very well have come out during public debate on the law -- but, of course, that never happened. Immediately after the AMBER Alert was passed, Sen. Leahy issued a press release complaining about the unrelated legislation that was piggybacked on the bill, singling out the Illicit Drug Anti-Proliferation Act as one of the worst offenders. "Business owners have come to Congress and told us there are only so many steps they can take to prevent any of the thousands of people who may attend a concert or a rave from using drugs, and they are worried about being held personally accountable for the illegal acts of others," he wrote. "Those concerns may well be overstated, but they deserve a fuller hearing ... I think we would have been well-served by making a greater effort to find out."

Too late. Instead, yet another badly conceived piece of drug legislation, capriciously taking aim at the enemy du jour, was rammed through the system before more rational voices could discuss it. The vote took a matter of minutes and no thought whatsoever; the repercussions of the law will be felt for years.