Lukas Moodysson's dark fable about a Russian teen prostitute is memorable and heartfelt. Is it also just too cruel to watch? 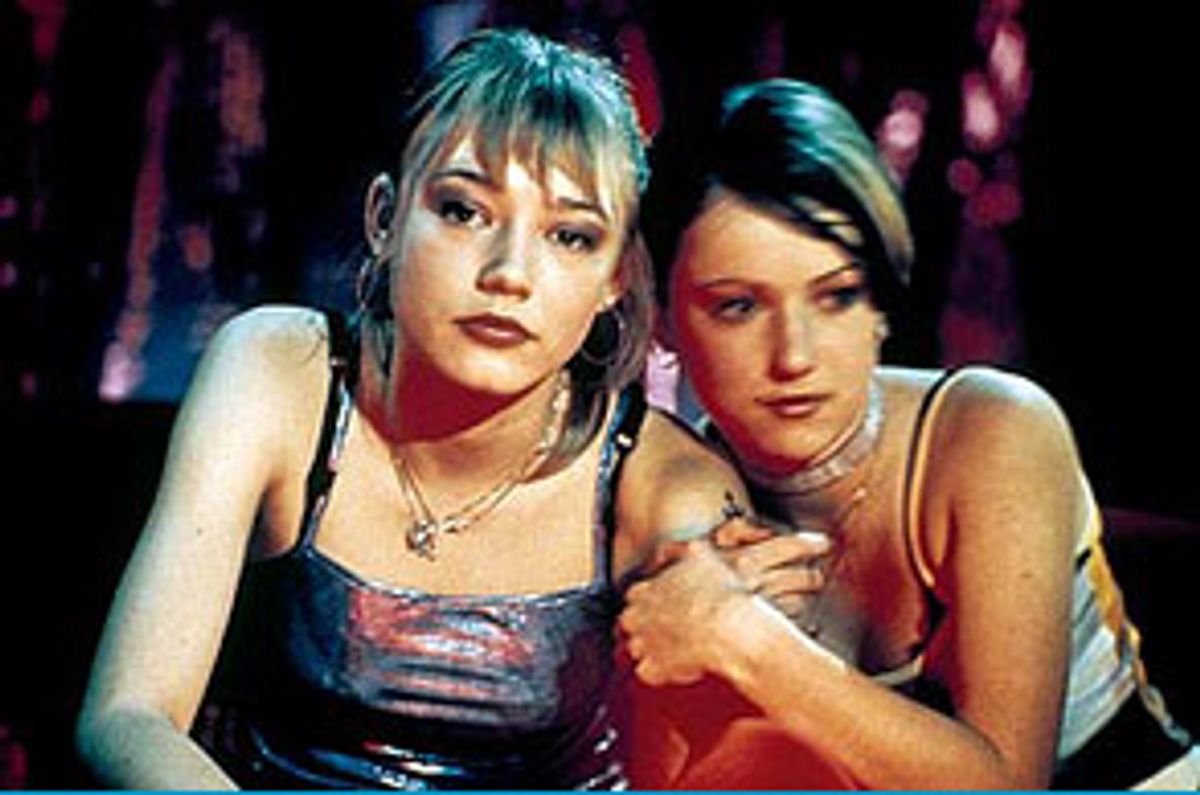 "Lilya 4-Ever" is no grimmer than its subject matter -- the sexual exploitation of young women in the economic wreck of contemporary Russia -- warrants. And yet the movie, the third feature from the gifted young Swedish director Lukas Moodysson, raises questions about how much realism is too much.

The movie opens with a blast of heavy metal from the German band Rammstein played at such an unholy volume that you feel as if your bones are being crunched as you sit in your seat. The music is a signal that the movie is going to be about watching things laid to waste. I kept hoping, though, that Moodysson would find what's also present in that music, the sense of something majestic and defiant rising out of the rubble. He doesn't. The volume lowers but the movie keeps walloping you.

"Lilya 4-Ever" isn't the case of a director punishing the audience by setting out to prove how tough-minded and unflinching he can be. Moodysson doesn't have that sort of bullying in him. The harshness of "Lilya 4-Ever" springs from the compassion that characterized his first two pictures, "Show Me Love" (aka "Fucking Amal," its much better Swedish title) and "Together." Moodysson's work here isn't exploitative or unfeeling. He's inside the point of view of his 16-year-old protagonist (Oksana Akinshina) and he doesn't want to betray the character by making her experience seem any less harrowing than it is. Even at its most brutal, we don't recoil from the movie. Akinshina's face is so open and -- despite everything -- naively hopeful that cutting ourselves off from her would feel like its own sort of cruelty.

At moments, especially when the (mostly hand-held) camera suddenly zooms in on a character's face, "Lilya 4-Ever" echoes the polemical social realism of the English director Ken Loach. But Loach has never convinced me he's interested in the characters who populate his movies as anything more than figures that exist to make his socialist points. Implicit in Moodysson's presentation of the choices facing Lilya is a critique of Western capitalism at work in the former USSR. He seems to be saying that economic repression has replaced political oppression and there's some truth to that -- as far as it goes.

"Lilya 4-Ever" is not without its own bleak integrity. But the movie wipes you out and leaves you with nothing, not even the feeling of exaltation that can be present in the most tragic works of art. At times the movie recalls Fellini's "Nights of Cabiria" and Thomas Hardy's "Tess of the d'Urbervilles," but neither Fellini's movie nor Hardy's novel, both among the most emotionally devastating works I know, left me feeling as hopeless and impotent as "Lilya" did. I honestly don't know when I've seen a grimmer movie.

When the movie opens, Lilya's mother is leaving for America to live with her Russian boyfriend and announces to her daughter that, contrary to plan, Lilya will follow later. Her mother has no sooner left than Lilya's slattern of an aunt (Lilia Shinkareva) appropriates the family apartment and sends Lilya off to live in a filthy rathole cluttered with the tattered effects of the old man who recently died there. Lilya's only real friend is 11-year-old Volodya (Artyom Bogucharsky), who basically lives on the street due to his abusive father. Apart from Lilya, the only companions he can find are the kids who come around when he supplies them with glue to huff. Lilya becomes his de facto protector and it's in the scenes between her and Volodya, who's half in love with her in his childish way, where we see that Lilya is little more than a child herself.

That makes what follows all the crueler. It soon becomes clear that Lilya's mother has abandoned her. Without money, and following the lead of a girlfriend, she takes to prostitution. She hates going with the older men who pick her up. But, in one of the more complex moments of the movie, Moodysson shows us that she enjoys the money it brings her. Lilya's face beams with pride when she can walk into the grocery store where she's tried to beg cigarettes on credit and can pay for what she wants.

In the movie's view, these kids have had their heads turned by the beckoning luxuries of the West. Lilya's brand of smokes are called "Wall Street" and the names of Britney Spears and Michael Jordan are evoked like gods. Thankfully, Moodysson isn't a scold. He knows it's not the evil of capitalism that makes people hate living in squalor and not having money for food. But the tricks Lilya turns are just temporary solutions, and when she meets a young man (Pavel Ponomarev) who promises to take her with him to a new job in Sweden, the pit of dread in your stomach tells you what's coming.

You can't argue with the intellectual or emotional logic of anything that happens in "Lilya 4-Ever," but still, Moodysson pushes it. When Lilya manages to get Volodya the basketball he covets, you just know it's a matter of time before someone destroys it. When Lilya runs screaming after her mother, do we have to see her fall in the mud, and then have a stray dog come up to nuzzle her?

When a john shows an unexpected bit of tenderness toward her, Moodysson immediately cuts to a shot from Lilya's point of view of the guy huffing and puffing on top of her; there's a later montage of johns that goes on for an eternity. These are moments when Moodysson is begging for our sympathy, pushing us to react when we already can't help but feel Lilya's misery. And there's something queasy-making about the later scenes where little Volodya appears to Lilya as her guardian angel. The tone of magic realism these scenes would require isn't among Moodysson's gifts, and they come off as unintentionally treacly.

The movie might collapse on Moodysson if it weren't for Akinshina (who resembles a Slavic Michele Williams). Akinshina hasn't yet learned how to protect herself as an actress and that plays right into Lilya's heartbreaking vulnerability. You experience the smile on her face when she believes she is going to America, or, later, going to Sweden with a handsome prince who loves her, as something like a reproach. You know none of her dreams are going to come true, and you can hardly bear it.

She's the main reason the movie, despite all its faults, is undeniably affecting. But she's not the only reason. Moodysson is one of the true humanist filmmakers to have emerged in recent years. In "Together" -- with the exception of one stuffy bourgeois -- even the most foolish of his characters was presented lovingly. The movie was a sustained feat of comic empathy; the film was a comic variation of what you get in Doris Lessing's brilliant recent novel "The Sweetest Dream," a toting up of the failures of the '60s counterculture made from the inside. Moodysson manages some comprehension of Lilya's mother's motives, and the girlfriend who rejects her after getting her into prostitution acts with the believable teen cruelty that was so sharply drawn in "Show Me Love." There's no empathy, even appalled empathy, toward Lilya's male exploiters, nor should there be. But that diminishes the movie. The pimps and johns here are little more than melodramatic caricatures transplanted to a piece of social realism.

When a movie is as uncompromising and problematic as "Lilya 4-Ever" it's bound to invite two clichéd reactions: Critics who take issue with it practically invite the charge that they are turning away from the film's power (as if they've never seen anything tough or wrenching before). And Moodysson will be praised for showing newfound maturity and seriousness (as if a comic work like "Together" is, on some level, not serious enough). But for Moodysson "Lilya 4-Ever" is a half step forward and one and a half steps back. His empathy is certainly intact, but the movie isn't nearly as full as either "Show Me Love" or "Together." It's darker and harder, all right, but its feeling is narrower, its range of emotion more constricted (even as it's admittedly more extreme).

"Lilya 4-Ever" is going to have a hard enough time finding an audience, and I certainly don't want to scare moviegoers away from a new film by a director who has been one of the bright spots in movies of the last few years. But I find it almost impossible to reconcile my feelings about the movie. "Lilya" seeps into your bones, and it's not easy to shake off. But in denying his heroine and the audience even a glimmer of hope, Moodysson has cut himself off from the possibility of transcendence. He's settled for depression without catharsis.