Don't be hatin' -- unless you're hatin' Jamie Kennedy's lame wigga act in this witless comedy. 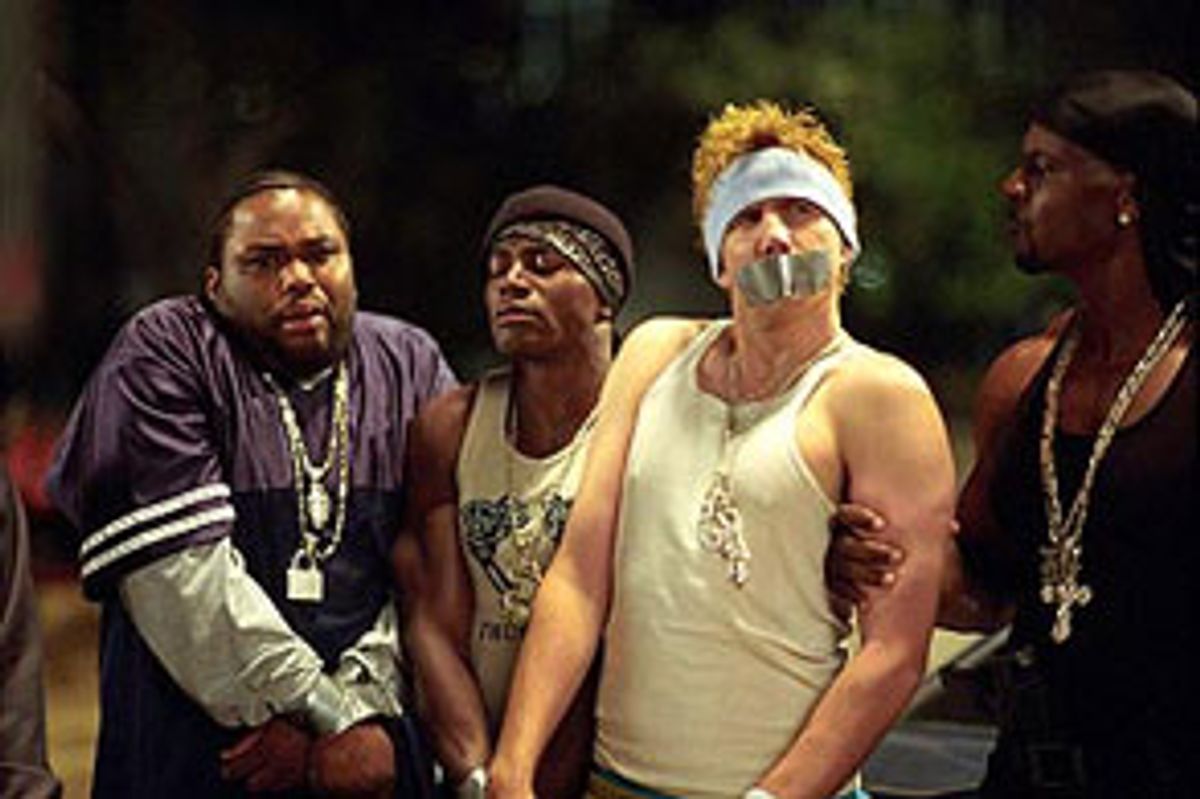 Watching Jamie Kennedy hoax people on his WB show "The Jamie Kennedy Experiment," or watching his extended wigga routine in "Malibu's Most Wanted," you're convinced that sooner or later, every kid you knew in grade school who ate paste is going to get his own three-picture deal.

Kennedy can be funny (as in "Three Kings," when he doesn't understand that night-vision goggles can only be used at night) but on TV and in this movie he's squarely in the camp of comics who think they can win you over with persistence. In fact, Kennedy's clammy style of nerd pushiness wears me down very quickly. There's nothing wrong with a one-joke movie -- if the joke gets better over time. Here, if you've seen Kennedy saying "Don't be hatin'" in the trailers and TV ads, you've already heard it.

Kennedy is Brad Gluckman, the rich Malibu son of a California gubernatorial candidate (Ryan O'Neal) who calls himself B-Rad and who's adopted hip-hop dress, slang, and what he thinks of as attitude. Of course, he's a creampuff and that's what his father's campaign manager (Blair Underwood) is banking on. In order to keep the kid from being an embarrassment to the campaign, Underwood hires two black actors (Taye Diggs and Anthony Anderson), who've played street thugs in a campaign commercial, to take on the roles again, kidnap B-Rad and take him to Compton for a taste of the real ghetto life. The aim, in Underwood's words, is to "scare the black out of him."

"Malibu's Most Wanted" is the third movie I've seen in the last month -- after "Bringing Down the House" and "Head of State" -- that attempts to wring laughs out of the spectacle of white people acting black. At the risk of repeating myself, where do these filmmakers get the idea that hip-hop style is such a foreign thing in white culture today? Not from what's on the radio or on MTV or on the pop charts.

There is, to be fair, something of an idea to "Malibu's Most Wanted." The two actors hired to give Kennedy a taste of thug life are preppy acting-school graduates who themselves have no idea how to act "ghetto." The joke at work here is that B-Rad, pampered, clueless and white as he is, really responds to hip-hop style while the two black men don't. They're bigger posers than he is. If only "Malibu's Most Wanted" had been a little more daring, it might have managed to satirize the playacting ludicrousness of gangsta style.

In his recent book "Where Dead Voices Gather," a critical study of minstrelsy and particularly the blackface performer Emmett Miller, critic Nick Tosches makes the provocative claim that minstrelsy (which had black as well as white entertainers) was less racist than the stereotypes that pass for "keeping it real" in gangsta rap today. "Malibu's Most Wanted" might have linked B-Rad's imitation of blackness to the pleasure whites find in black culture (as "Undercover Brother" did, presenting black culture as so utterly irresistible that no white person within hearing distance of a Mary J. Blige song could resist shaking his rump).

But that's asking more of this movie than it's capable of delivering, and what it is capable of delivering isn't much. At one point, Diggs and Anderson, both looking like they stepped out of an Eddie Bauer display, complain that even now black men can only get cast as gangbangers. The gag is meant to be, of course, that they are so utterly wrong in the role. But there really is at least a minor insult at work in casting the handsome and charismatic Diggs in this nothing part. It's particularly inopportune coming after "Chicago," where he has the sleekness of a '20s Art Deco drawing. He's game here, but he's far too classy for the movie he finds himself in.