Jacques Perrin's fierce and marvelous bird documentary makes us feel like we're flying -- and reminds us that nature can be cruel. 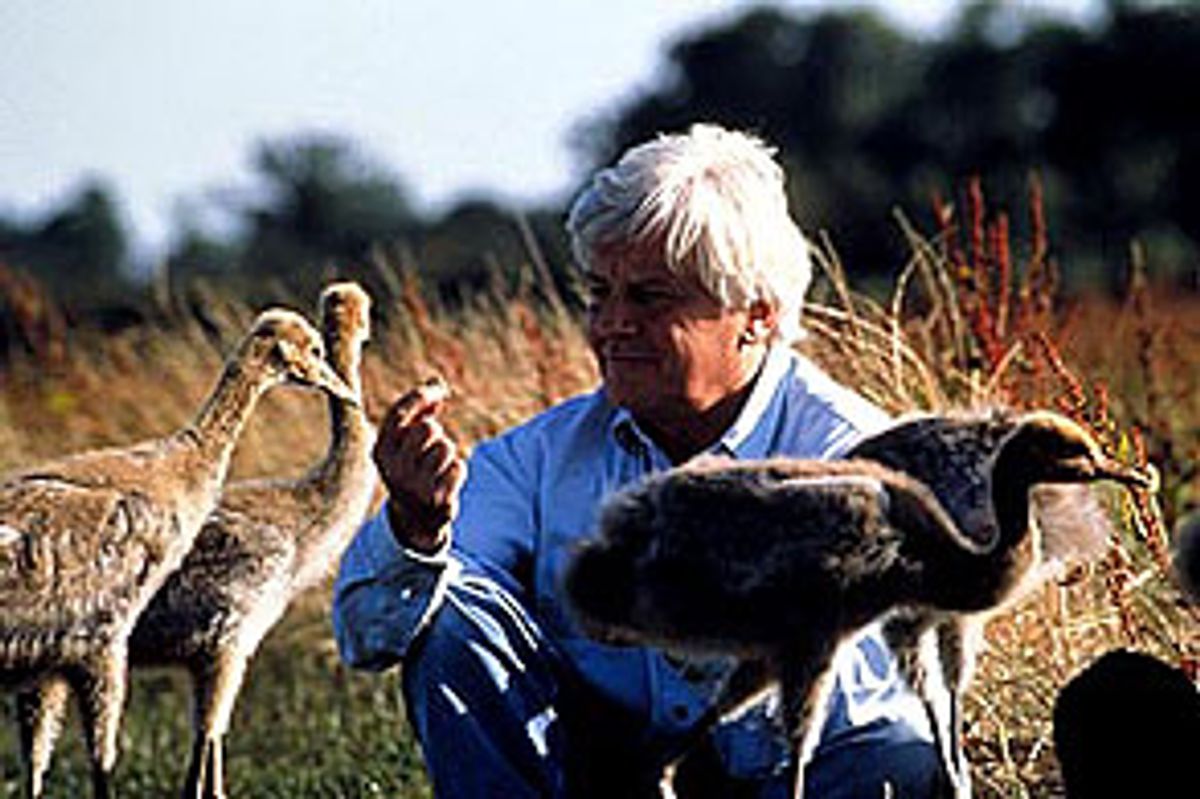 Birds are very mysterious creatures, and they never seem more so than in Jacques Perrin's marvelous documentary "Winged Migration." The movie, which opens a window into the migratory travels of all sorts of birds, is more visual than educational, and that's what's so revelatory about it: It never feels like one of those dry, pedestrian nature specials that you happen upon while restlessly flipping channels. Those shows come off like a collusion between a cameraman and a narrator to make order out of the chaos of nature, and to arrange it into textbook-neat columns from which we can take away fat, discrete nuggets of information.

There are no nuggets in "Winged Migration," but there's lyricism, fierceness, wit, a bit of tragedy. This is awestruck filmmaking at its best: When Perrin's cameramen capture a flock of geese soaring against a confetti pattern of nighttime stars, or a group of storks strutting across a landscape of creamy sand dunes in Africa, they're not just capturing the beauty of nature and beaming it back to us authoritatively. The wonder of what they're seeing through that lens becomes part of the image itself. I think the only way you could walk away from "Winged Migration" saying you've seen it all before is to be a bird yourself.

Perrin has built a career as a producer (his credits include Costa-Gavras' "Z") and an actor. In 1996, he made "Microcosmos," a documentary that zoomed in on the intimate world of insects. To make "Winged Migration," Perrin and his co-directors Jacques Cluzaud and Michael Debats put together footage shot by five crews comprising more than 450 people (including 17 pilots and 14 cinematographers) as they followed the migratory patterns of various types of birds across some 40 countries and all seven continents. The cameras were mounted on ordinary gliders, helicopters and other aircraft; in some cases, the filmmakers used a small remote-controlled model glider incorporating a compact camera. Those setups bring us some astonishing footage: We travel with the camera as it captures images from within bird formations, giving us the feeling that we're soaring, too. There are a few aerial shots of flying V's of birds, fluttering speckles drifting along a backdrop of recognizable continents -- you wonder if God himself gets such a fine view.

The picture is put together with a kind of organic logic. It's laid out to be impressionistic rather than overtly informative, and yet you still walk away feeling as if you've learned something -- or at least been privy to certain things you'd never dreamed of seeing. The narration is sparse; occasional subtitles tell us what type of bird we're looking at and where it and its pals are headed. But mostly we're left to simply drink in the spectacle -- visions like a formation of white birds fluttering along by some brilliant red and gold fall foliage (nature is an even better production designer than Dante Ferretti). We see a flock of Canada geese having a respite somewhere in the Southwest. Their cranky honking changes in tone as they suddenly become alert, sensing a potential threat off in the distance: We finally see a herd of thundering wild ponies coming over a ridge long after the geese have sensed it, scattering and squawking at the inconvenience of being disturbed.

And there are two wonderful coordinating shots, one early in the movie and the other closer to the end. In the first one, a flock soars toward Paris, veering by that city's Statue of Liberty as they approach the Eiffel Tower. Later, we see a formation of Canada geese headed toward the Brooklyn Bridge, the World Trade Center clearly visible to their right. ("Winged Migration" took nearly three years to shoot, its footage gathered from July 1998 to June 2001.) In a lovely echo of that earlier shot, they sail by our Statue of Liberty. When birds memorize their flight path, the youngsters picking up the route from the older ones, they learn to spot the important landmarks along the way. Without spelling it out, the movie suggests that some of the achievements we humans are most proud of (like the Great Wall of China, seen briefly in another aerial shot) are little more than place markers for the birds' journeys.

So many of these birds are just amazing to look at: There are grebes that, viewed head-on, with their flattened thatches of dark, downy feathers, are dead ringers for the Three Stooges' Moe; surly bald eagles, looking as if they still hold a grudge at the mere thought that the wild turkey almost became our national bird; and, my favorites, the gannets, willowy creatures with sandy-golden heads perched atop slender necks, their faces and beaks marked with sleek art-deco lines. They're like living Erté illustrations.

Although it's never heavy-handed, "Winged Migration" doesn't shy away from environmental issues. The sight of a flock of geese taking a respite outside a dingy, smoke-puffing Eastern European factory -- they optimistically attempt to bathe in its sludgy waters, and one becomes trapped -- is enough to turn even the most hardcore consumer into at least an armchair environmentalist. And there are a few sequences of birds being hunted, including one that shows a bunch of geese making friends with a decoy. They cluster around it with friendly curiosity, and the camera captures the instant they realize it's not what they think it is. They scurry away, fluttering into the sky against a volley of gunshots; it seems like the worst kind of deceit and dishonor.

While I think "Winged Migration" is fine for children above 8 (as long as you prepare them for the tough stuff), I wouldn't recommend it for very young kids. There's a terrifying sequence in which a troop of clattering, scrabbling crabs surround a wounded bird, cornering it sadistically before setting upon it. I could barely bring myself to look at the screen, and I do think the footage itself presents something of a moral question -- you wonder how the person behind the camera could bring him- or herself to film the event without intervening. But I don't think "Winged Migration" tries to either sugarcoat nature or rub our noses in its fierceness. It simply strives to maintain a sense of balance, to remind us that as awe-inspiring as nature is, it isn't always nice.

The movie also reinforces the idea that nature is all around us. Even when we're not in its direct presence, it's always reflected back at us in art. When I looked through my notes after watching the movie, I realized that in the free association of my note-taking, I'd translated much of what I'd seen into movie references. At the sight of red-crowned cranes leaping delicately, like dancers, I'd jotted down "Disney/Looney Tunes"; seeing a pattern of flying geese, a moving brocade of black silhouettes against an almost sinister-looking evening red sky, I'd scrawled "Tim Burton magic." The fastest, handiest words I could find to describe nature had come directly from man's translation of it.

Nature, of course, came first -- before cartoons, before filmmaking, before literature or music or painting or poetry. Before there was Ralph Vaughan Williams' "The Lark Ascending" or the gospel spiritual "I'll Fly Away," there was the bird itself, twittering in a tree or, even more remarkable, taking improbable flight, the movement of its wings stirring the air with an imperceptible thrum. Nothing that man creates can ever live up to the real thing, but you can't blame him for trying. "Winged Migration" brings us directly to the source: Birds are not just the movie's stars, but its whole universe. They inspire in Perrin and his crew, and in us, not just awe but humility. You'll never look at them the same way again.