The only thing you'll remember about this sleepy drama is Al Pacino as a baggy-eyed New York P.R. kingpin. And the role isn't even close to his best. 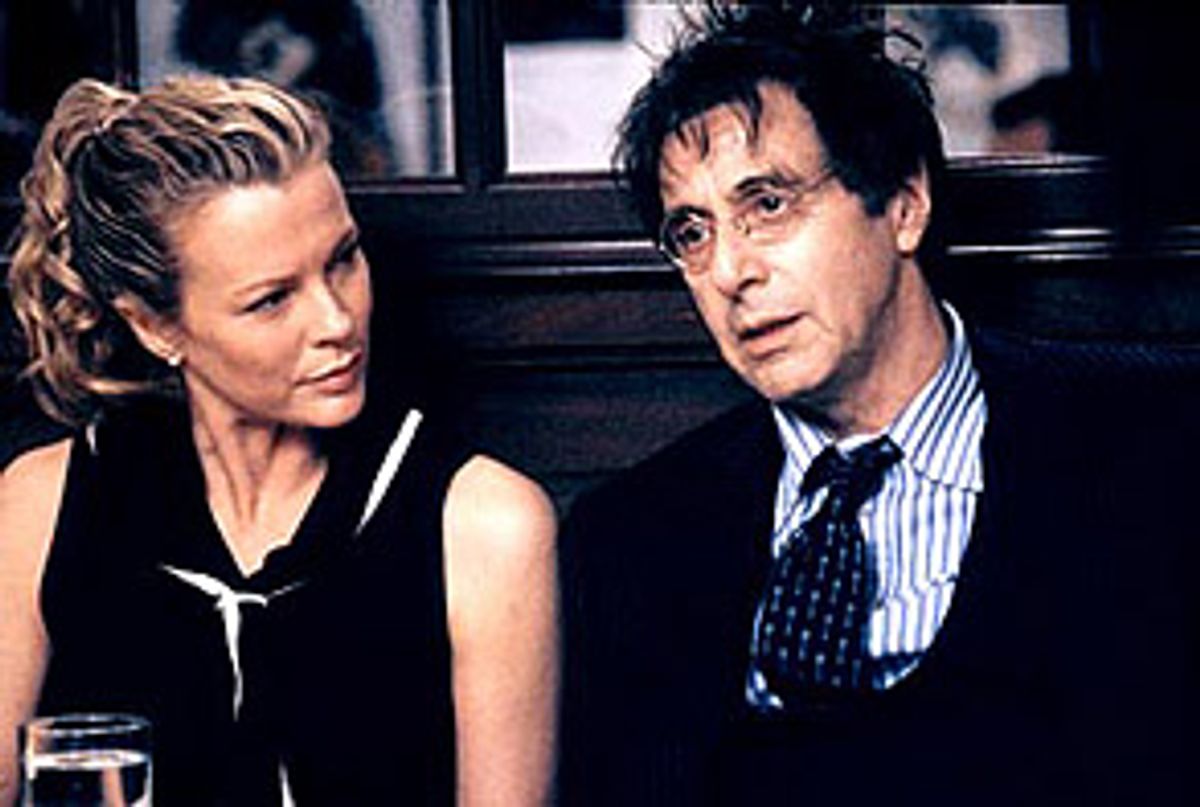 "People I Know" is about corruption, about how the new ways of doing things always crash roughly against the old ones, about how our bodies often give out before our minds or our spirits do -- in short, it's all about the tired baggage that Al Pacino, one of our most beloved actors, carries mostly beneath his lower eyelids. Pacino plays Eli Wurman, a guy who used to be a New York P.R. kingpin but who's now just a parched husk, on his way to being completely forgotten by most of the big players in town. He's also a fellow who takes too many different kinds of pills at once, perhaps not in order to feel better but to feel worse: When you feel bad, you look bad, and looking bad actually suits him, as if he'd long ago found his look (well-cut but rumpled suits, Droopy Dawg expression, hung-over-rooster hair) and stuck with it.

The problem isn't that Pacino has played similar roles in similar ways before (he has), or that he isn't any good (he is); it's that, two hours after you've seen "People I Know," he's all you remember about it. Even when Pacino is sub-Pacino (in other words, even when he's delivering far less than the off-the-charts performances he gave us in the "Godfather" movies, "Serpico," "Carlito's Way" or "Donnie Brasco"), he's often enjoyable to watch, though I prefer the exhausted neuroticism he showed in "Insomnia" to his out-of-control windmilling in "The Recruit."

In "People I Know," Pacino seems vaguely but intentionally effeminate; he's a bit like a frail little old lady, one with a smoker's rasp and a sailor's mouth. More than once in "People I Know," he pulls that trick, now one of his trademarks, of peering over his reading glasses at another character with a look of incredulity. At one point, as he's trying to read some document or other, his assistant informs him he's wearing the wrong glasses and hands him the correct pair, which he jostles on over the first set so he's wearing two at once. The owlish eccentricity of the look suits him.

But a few inspired fillips like those aren't nearly enough to keep "People I Know" on track. Director Dan Algrant (whose previous credits include "Naked in New York," as well as episodes of "Sex and the City") builds the movie around Pacino so that we feel a certain amount of compassion for him, but the picture has a lax, sleepy vibe: There's never anything taut or electric about it. And so, like Pacino's character, we sleepwalk through it, figuring that sooner or later it'll simply be time to throw in the towel. Wurman, in his decrepit state, is nearly useless but still striving to be relevant.

His last big client from the old days, a puffy, aging movie star with political aspirations named Cary Launer (Ryan O'Neal), asks him to bail out a friend who's been arrested. That friend, a flamboyant, cynical TV personality (Téa Leoni, a marvelous actress who has shamefully little to do here), has a dark side and several concomitant dark secrets, some of which could sink Launer's nascent political career. Some bad stuff goes down, and Wurman gets pulled deep into the muck, despite the efforts of his brother's widow, a shy but sophisticated country girl played by Kim Basinger, to lure him away to a relaxed retirement on a farm in Virginia. (Wurman's languid Southern drawl marks him as a man who's more Lexington, Ky., than Lexington Avenue, anyway.)

Pacino's role here (the script was written by Jon Robin Baitz) is a lopsided bookend to the one he played in "Carlito's Way" -- in that movie, he's a tired but principled hood looking to go straight after one last fling, but escape to the normal world is just out of his reach. It's one of the most moving and nuanced performances of Pacino's career. This one, although it's occasionally quite touching, is just a feeble shadow of it.

Pacino is at a stage where, apparently, he feels compelled to work constantly: He has appeared in some four movies over the past two years. That's not uncommon among actors of a certain stripe. (Think of how many movies Michael Caine has wedged into his career over the years, doing work that's sometimes simply solid and other times magnificent.)

But you can't help wishing that Pacino would relax a little and bite into only one role per year instead of lunging at the all-you-can-eat buffet. There's something dispiriting about seeing him in so many movies clustered so close together, with none of them quite hitting the mark. You can't blame an actor for being eager to work: Being seen on the screen or on stage is what actors live for, a way of reinforcing their identities.

But there's a whiff of desperation about Pacino's constant paddling -- as if he felt, perhaps, that if he didn't work every minute he might blow off the face of the earth. To stay grounded, all he needs to do is take one role with real ballast, to set his bags down in one place and stay a while. He's earned the right to take a load off, without worrying that we might forget about him. We couldn't do that even if we tried.