If "The Real Cancun" is a modern version of the beach-party flick, these are troubled times indeed. Here's hoping, for your sake, that you don't enjoy this smutty, shallow "reality movie" nearly as much as I did. 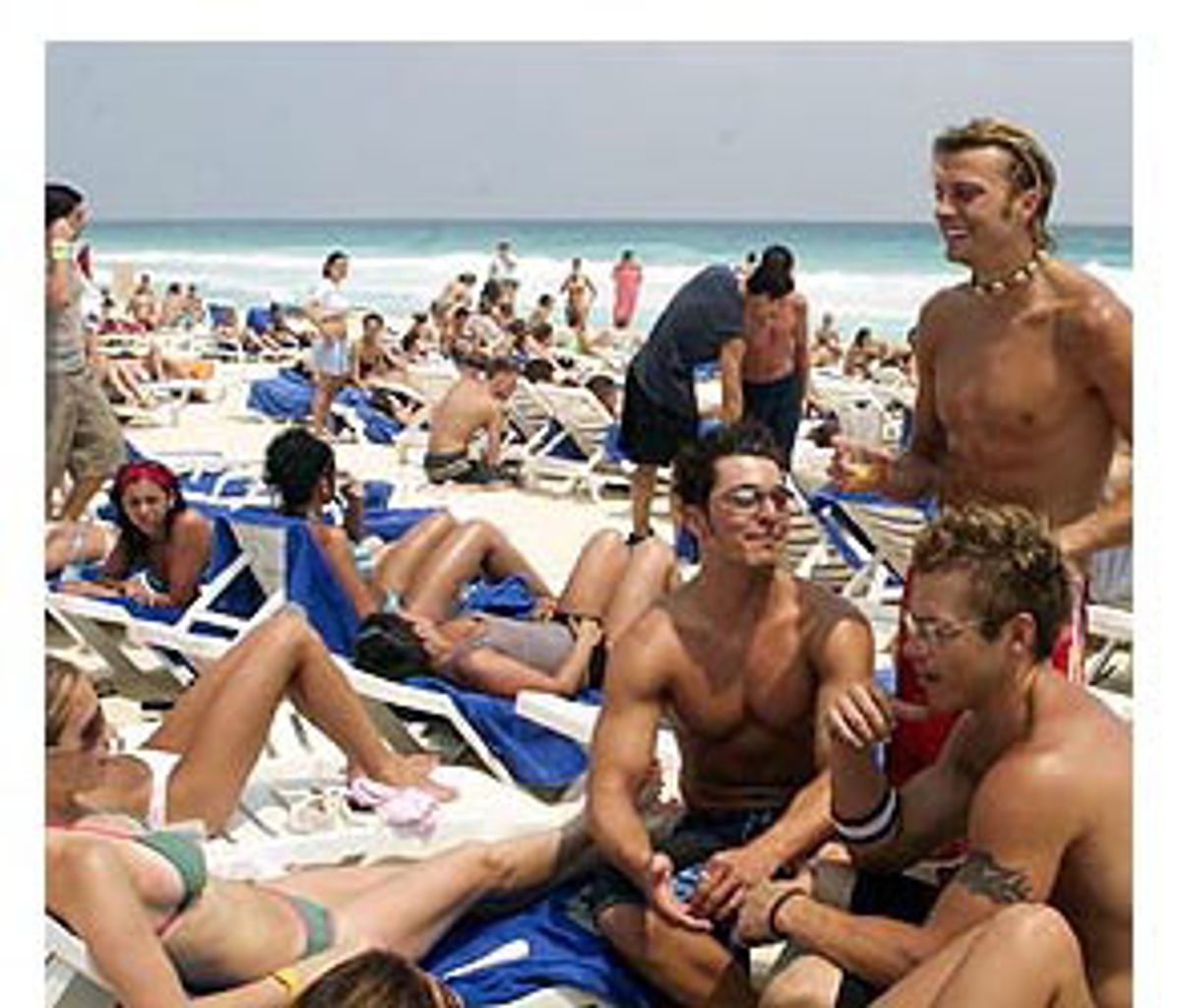 "The Real Cancun" is a reflection of just how sleazy and shallow American culture has become, which is one of the reasons why you, a responsible citizen, will feel it is your duty to purchase a ticket and check it out for yourself. Then you, too, can watch in horror as these fickle young things prance around, wanting little more than to be half-naked and inebriated in the sunshine, rising each morning just to get falling-down drunk each night, making out in the pool and tossing back tequila shots and dancing in lewd and obscene ways. After 90 minutes of watching these taut young bodies gallivanting about on the beach or at the crowded club, with no concern whatsoever for the negative impact of alcohol poisoning or the real danger of melanoma or the risk of contracting STDs from the strangers with which they so cavalierly engage in intercourse (and you'll know they do it, too, because you'll watch with your own eyes as they grind underneath the blankets! Yeah, I know!) -- after witnessing such absurdly puerile and demeaning behavior, you'll understand just how far we've fallen as a culture.

You'll also wish to God you were young, drunk and beautiful on a beach in Cancun. But I don't mean to imply you're that sketchy and self-indulgent, that you would secretly find it sort of fun to watch a wide variety of breasts bouncing around in broad daylight. You probably aren't irresponsible enough to enjoy it when a square guy who announces the fact that he has never had a drink eventually gets coaxed into doing tequila shots until he's blurting, "I want to see some boobies!" After all, only a juvenile creep would laugh when Paul discusses the size of his penis, or when Jorell talks about the superior quality of midget asses. You'll just find it pathetic and pointless. And if there were footage of the orgiastic, self-destructive parties that occurred back in Roman times, that would disgust you, too. You might watch it, but only for historical purposes.

Personally, I have a weakness for a good party scene. I love the aerial establishing shot, the introduction of the theme song as our hero enters the fray. When that pool party scene in "Boogie Nights" opens to the strains of "Spill the wine! Take that pearl!" I want to be there, doing bad, dangerous drugs with those porn-industry weirdos. The fact that they're total and complete morons, that the whole point of the scene was to pound home just how stupid they are, doesn't faze me. I love the party scenes in "Swingers" and "Breakfast at Tiffany's," and even that one in "All About Eve" when Marilyn Monroe is babbling idiotically on the steps and Bette Davis starts lashing out at everyone in sight.

There's a voyeuristic thrill in a good party scene, an opportunity to try distasteful behavior on for size. A little voice in your head might scream "Stay away from that balcony, stupid! You're wasted!" or "Is it really a good idea to whip your top off in front of all these people?" But that's your inner parent talking. Your inner road whore is screaming very different things at the top of her lungs, which you would hear if your inner hair-metal band didn't have their amps cranked up so loud.

But your inner snob might not let you go see "The Real Cancun," because on paper, it sounds absolutely awful. A reality movie, shot earlier this year among the rampant spring-breakers at Mexico's No. 1 party-hearty beach resort? Who would pay to see that? But the truth is, all that sand and sun and T&A looks pretty damn good on the big screen, and when "It's gettin' hot in here, so take off all your clothes" blasts on the speakers, well ... There are two kinds of people in the world. The kind who hear that song and inadvertently move their heads to the music, imagining dancing in a crowded club with a drink in their hands, and the kind who change to a different station.

Sadly, even lovers of cheesy dance music will find it hard to ignore "The Real Cancun's" flaws. Despite a hilarious and exuberantly fun start, despite the great casting and surprisingly clever editing, the movie barrels into familiar MTV territory in the last half-hour and never fully returns. Why do "Real World" producers Mary-Ellis Bunim and Jonathan Murray strain to deliver a plot where there is none? This isn't television, so we're far more impatient than we would be on our couches. Why not get a little more innovative? Why not unapologetically shovel on even more rapid-fire cuts of clever, ridiculous or gratuitous scenes?

We don't remotely care that Sky is rejecting Paul, over and over again, aside from whatever entertaining witty banter can be squeezed from it. Why do we need to see Sarah and Matt bicker about their nonrelationship, when David is singing a hilarious song about STDs that's foolishly relegated to the outtakes? And, while the club and party scenes are giddy and over-the-top, the performance by Snoop Dogg feels relatively mundane and out of place, like "MTV Beach Party" footage that got edited into the mix for no reason.

Maybe "The Real Cancun" is best described as a modern twist on the beach-party movie. After all, it's shallow, made for teenagers, largely plot-free, and offers up the kind of lowbrow fun that most adults are ashamed to enjoy, but that many still do. While "The Real Cancun" barely upstages its "lust in a bikini" reality-show brethren, like "Temptation Island" and "High School Reunion," if you loved those shows despite their idiocy, you'll probably enjoy the oversize absurdity of this movie.

But if you hate reality TV and cheesy dance music and all such bilious pap, and you dutifully march into the theater in order to document the decline of Western civilization, only to find that you secretly enjoy seeing young girls pretend to hump each other on stage, never fear. You can always blame it all on these crazy times. Perhaps, as with the era of beach-party movies, willfully frothy entertainment flourishes in such an uncertain political and economic climate. As Gary Morris writes in his essay "Beyond the Beach: AIP's Beach Party Movies," "'Beach Blanket Bingo' and the films that preceded and followed it have a schizoid air, typical of the period of social flux in which they were made. While the 'text' is a farcical portrayal of the carefree lives of happy vacationing teens experiencing minor romantic problems, the subtext is reassurance. The films exist in an insular world untroubled by the Cold War (fear of nuclear holocaust), collapsing race relations, exploding criminality and drug use, the sexual revolution and the emerging Vietnam War."

Yeah, that's it! I only love seeing boys suck tequila out of girls' belly buttons because I can't face the fact that the world is going to hell in a handbasket!