If the president truly believes the Pennsylvania zealot is "an inclusive man," we're all in trouble. 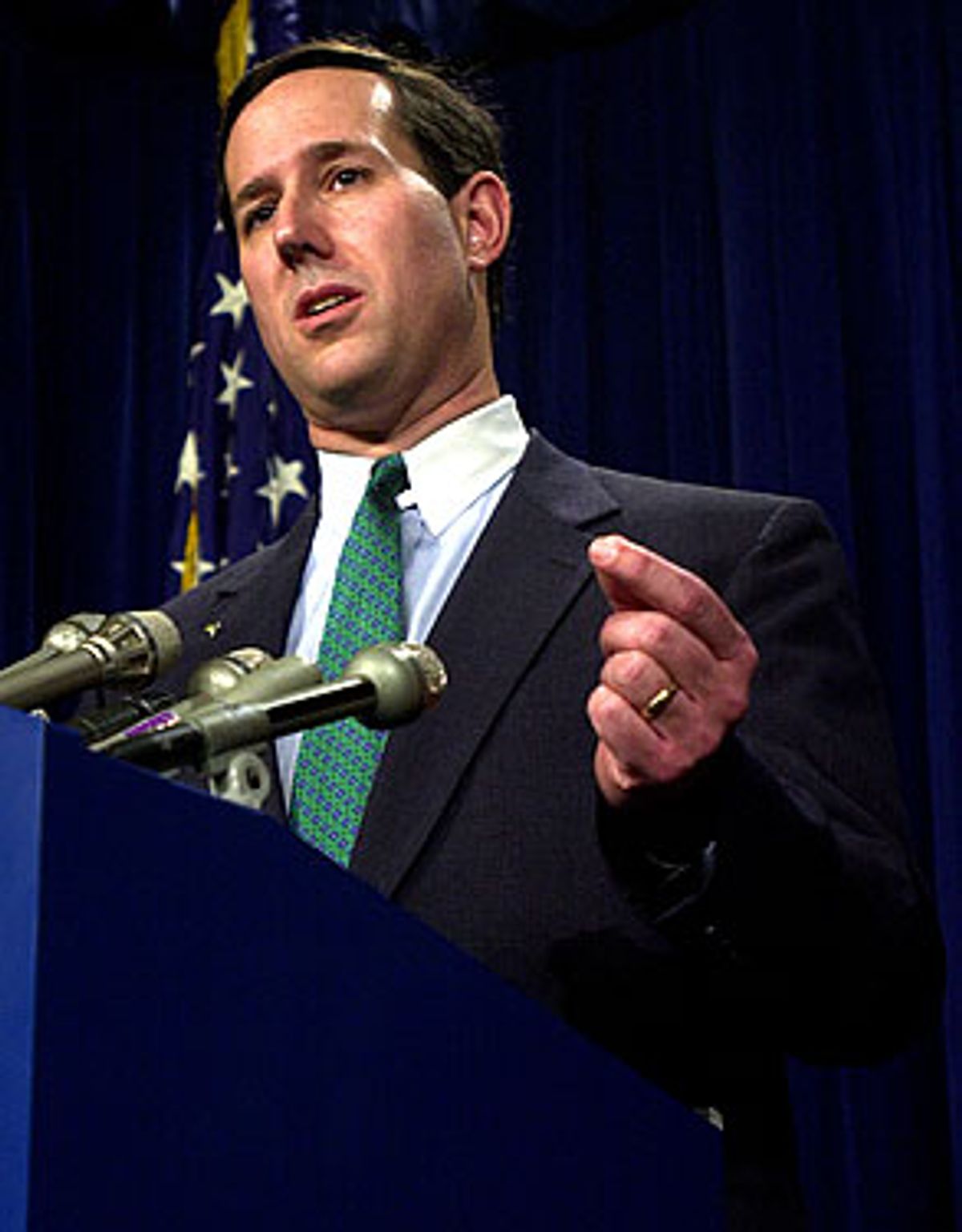 It took a few days, but finally President Bush came to the defense of Pennsylvania Sen. Rick Santorum, who's been hammered by Democrats and a few brave Republicans for equating homosexuality with bigamy, polygamy, incest and adultery in an Associated Press interview.

Since the story broke Monday, there's been official silence from the White House, but on Friday Bush spokesman Ari Fleischer told reporters, "The president believes that the senator is an inclusive man. ... The president has confidence in Sen. Santorum and thinks he's doing a good job as senator -- including in his leadership post."

Well, now we know. Calling Santorum an "inclusive man" is about as truthful as calling Israeli Prime Minister Ariel Sharon a "man of peace" -- even Sharon's admirers know he's a warrior. But being president makes you very powerful, and means you're almost never called a liar, even when you're lying.

There is nothing inclusive about Rick Santorum, who, as chairman of the Republican Conference, is the GOP's No. 3 Senate leader. He is a right-wing extremist who has more in common with fanatical Islamic fundamentalists than with many Americans. The president's failure to repudiate him or his remarks is appalling -- and in the long run, it will cost him politically.

I agree with Andrew Sullivan, a stalwart Bush defender who nonetheless wrote on Friday, with evident pain: "The White House still doesn't understand the damage that this incident is doing, the fact that it is beginning to make it simply impossible for gay people and their families -- or any tolerant person -- to vote for the president's party."

The full text of Santorum's remarks should give all Americans the creeps -- and not only when he grossed out the AP reporter by talking about "man on dog" sex. "I'm sorry, I didn't think I was going to talk about 'man on dog' with a United States senator, it's sort of freaking me out," she told him. I bet. (Sometimes I wonder about the inner life of these anti-sex fanatics. Why do I suspect Santorum's spent more time thinking about "man on dog" sex than the rest of us?) Let's be clear: Santorum wasn't just talking about gays; he was expressly denying that Americans have a right to privacy. Talking about a Texas sodomy law currently before the Supreme Court, he went on at great length:

"The right to privacy is a right that was created in a law that set forth a [ban on] rights to limit individual passions. And I don't agree with that ... Does that undermine the fabric of our society? I would argue yes, it does. It all comes from, I would argue, this right to privacy that doesn't exist in my opinion in the United States Constitution, this right that was created, it was created in Griswold -- Griswold was the contraceptive case -- and abortion. And now we're just extending it out. And the further you extend it out, the more you -- this freedom actually intervenes and affects the family. You say, well, it's my individual freedom. Yes, but it destroys the basic unit of our society because it condones behavior that's antithetical to strong, healthy families. Whether it's polygamy, whether it's adultery, where it's sodomy, all of those things, are antithetical to a healthy, stable, traditional family."

Sullivan has correctly asked whether that means Santorum wants to criminalize adultery. It's a good question. And contraception too?

The Pennsylvania ayatollah has refused to retract his remarks. He insists he's not against homosexuals, only "homosexual acts." But despite Santorum's radical statements, Republicans have proudly told reporters there will be no rerun of the Trent Lott debacle, in which the Senate majority leader was sacked for publicly admiring Strom Thurmond's racist presidential campaign last December. Why? For one thing, Lott got thrown overboard less because his GOP colleagues cared about his racism than because they thought he was a liability who wasn't loyal enough to Bush, had made a lot of enemies and cut too many deals with Democrats. Santorum's a company man, so everybody got the talking points: Senate Majority Leader Bill Frist, like Fleischer, calls him "a man of inclusion." Actually, most Republicans got the no-talking points: The White House and Republican National Committee have advised Republicans not to comment on Santorum's outrageous remarks when asked about them by the media, so most of them aren't.

But they should be asked about them anyway, again and again. The other reason Santorum won't get the Lott treatment is that Republicans think homophobia, unlike racism, won't cost them politically, and that it's still safe to bash gays. Reporters should question Santorum and his defenders at every opportunity. Do they think Vice President Dick Cheney's gay daughter Mary should be prosecuted for her "homosexual acts?" And does the GOP believe in a right to privacy? Should adultery be criminalized? What about contraception?

Reporters tried, but failed, to get Ari Fleischer to expand on his vapid statements defending Santorum on Friday. Get a load of this exchange:

How they act sexually? Because I asked sexually ...

But the police in Texas asked how they act sexually.

The same way you would say that about how anybody -- what's his reaction to this person or that person -- say, are they a nice person, what kind of person are they? It has nothing to do with their sexuality.

So does he believe that they ought to be free to be themselves, without interference from police?

The president has always said that when it comes to legal matters, that it's a question of different groups, homosexual groups, gay groups should not have special rights or special privileges.

Is it a special privilege to be able to love the person you love the way you want to love them, without interference from the police?

So he has no position on that?

It's a matter that's pending before the court, in regard to your last question.

It's worth remembering who was Texas governor in 1998, when police burst into the bedroom of the gay couple whose case is before the Supreme Court: Yes, it was Fleischer's boss, our president. He's had plenty of time to rethink that law, which was enforced on his watch, and he hasn't. He had all week to rethink Santorum's outrageous remarks, and repudiate them, and he didn't.

After watching a segment about Santorum on Fox News the other night, I stayed tuned as the network segued into an Iraq update, and a Fox commentator decried the country's Shiites for trying to "introduce religion into political life." Of course the president's party is trying to do the same. Let's hope Santorum's candor wakes more Americans up to the fact that Iraqis aren't the only ones at risk of losing their freedom to religious fundamentalism.