Upstairs, downstairs, in the bedroom 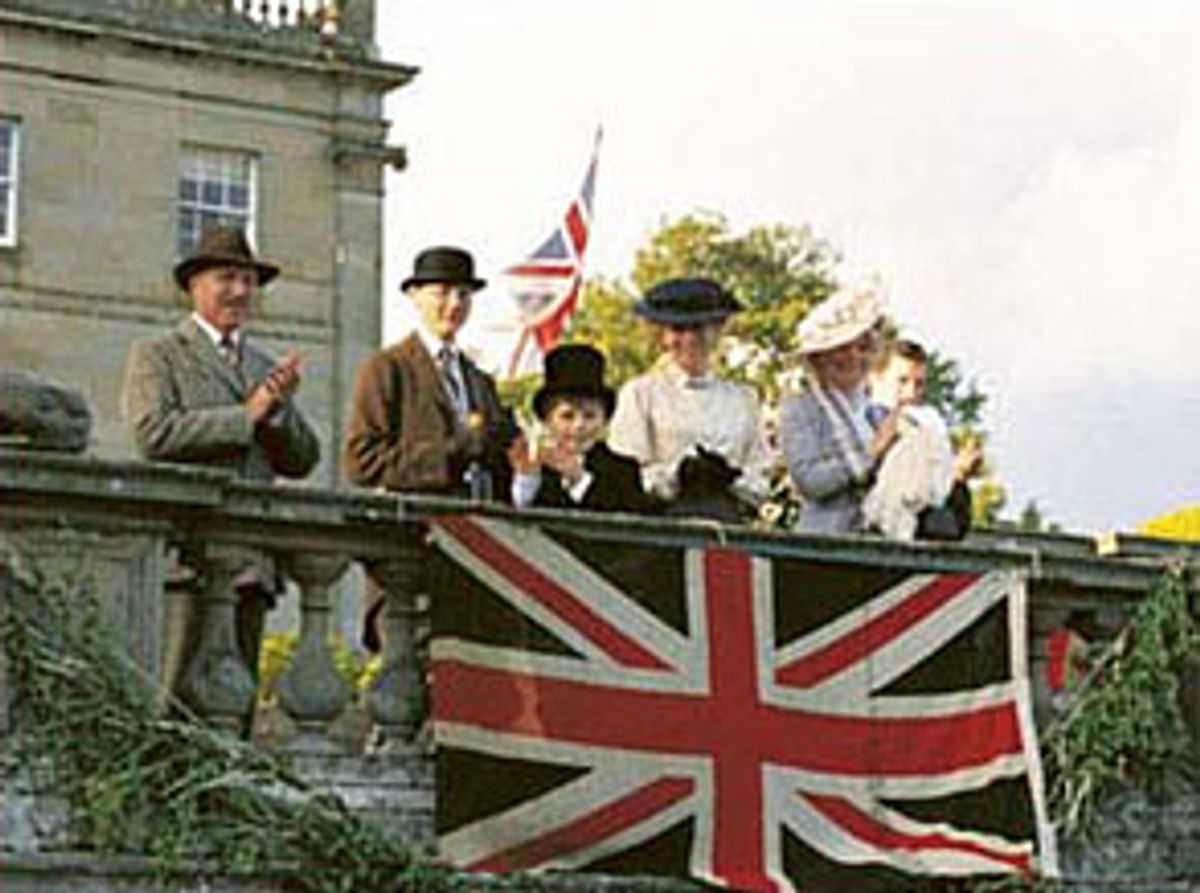 A tired young man beds down on a cot in the hallway. A teenage girl carries porcelain pots filled with feces down a long flight of stairs. "The more you do, the more they seem to want," an exhausted man tells the camera.

Leave it to PBS to get away with making a reality show about S/M under the pretense of illustrating life during the Edwardian era. In the tradition of "The 1900 House" and "Frontier House" before it, "Manor House" documents the lives of a family and 13 individuals selected to be their servants and live with them in a 109-room Scottish mansion called Manderston. In keeping with the make-believe times (1905 is the let's-pretend year), the butler, chef, maids and footmen toil around the clock with no breaks, sleeping a scant five hours a night in order to keep the mansion running smoothly while the family blithely wanders about, sampling vintage wine and cooing over how naturally they take to the life of the privileged.

This is reality TV, PBS-style: The pace is relaxed, the mood is fairly thoughtful and subdued, and snippets of historically relevant information are littered throughout each two-hour episode, which will air on three consecutive nights, Monday through Wednesday, April 28-30, at 9 p.m. PDT (check local listings). But don't let the show's soothing Merchant-Ivory tone fool you: The producers still hit all of the standard reality TV marks, from capturing flaring tempers on camera to taking great interest in the love blooming between the scullery maid and the hall boy.

And of course, the usual torture-them-until-they-crack strategy is in full effect. The narrator, for one, seems to take great delight in watching the staff suffer through their grueling tasks.

Narrator: "The butler, Mr. Edgar, expects efficiency and the strictest obedience from his staff. But our volunteers are ill-adapted to the servants' life. Now the strain is beginning to show! Hall-boy Kenny, the lowest-ranking member of the male staff, feels his spirit is being broken."

Kenny: "I think they're beginning to slowly drain the life out of me and turn me into this sad robot ..."

It's curious how all reality shows, from "Survivor" to "Joe Millionaire" to "Manor House," focus on making their subjects miserable, whether it's under the guise of "enlightening" them, stoking their will to survive, or exposing them as gold diggers. The lessons learned by kitchen maid Antonia Dawson are particularly amusing. After a tough day, she tells the camera, "I've decided that if I really was a kitchen maid, and I really had to do this, then I would leave and become a common streetwalking prostitute. And the reason for that is, you wouldn't be disgraced if you had umpteen fags and got drunk every night. And also, you wouldn't have sore feet because you'd be on your back all day."

While you have to hand it to the show's creators at Wall to Wall Productions for casting such entertainingly outspoken servants, the best casting choice by far is John Olliff-Cooper, a businessman who's chosen to be the head of the household. While his wife and two boys handle their positions with some humility and grace, "Sir John" (as his family and staff call him, in keeping with the show's mythology) appears to relish his position at the top of the hierarchy to a disturbing degree.

Not only does Sir John repeatedly insist that he has no problem being waited on hand and foot by people he never speaks to, he implies that he himself is not the servant type and therefore doesn't need to trouble himself with putting himself in their shoes. While such a gleeful approach to power is cute in his 9-year-old son, who chats happily about ringing the bell to summon servants and making them feel as inferior as possible, in an adult it's somewhat unsavory.

The staffers reserve their judgment for a while, but eventually come to despise Olliff-Cooper after he consistently demonstrates little concern for their well-being. While he excuses this behavior as his intention to be true to the era, even his sister-in-law, Avril Anson, is openly hostile when speaking of him. "The formality is driving me nuts," she confesses. "I have to agree with John even when he is talking what I consider arrant nonsense. He recently expressed his opinion that educating women is a waste of money." She also seems slightly disgusted with how easily he fits into his role. "John, as you can imagine, is loving every moment here. It is his dream come true."

Since no one in the house has the status to openly challenge Olliff-Cooper's opinions, the show's creators invite outsiders, thinly veiled as guests, to speak directly to him about his beliefs. One such guest asks if Olliff-Cooper's staff is happy. He replies that they are. The guest then asks, "Do you speak with them?" The host says he doesn't. "So how do you know if they're happy?" When Olliff-Cooper explains that "A smiling maid is a happy maid," several of the guests burst out laughing at his ignorance.

Since this is PBS and not Fox, we're led to believe that such confrontations aren't the result of the manipulative creators' attempts to drum up drama, but a reflection of the head-spinning technological and social change that took place during the Edwardian era. Likewise, when the family throws a charity fair and an outspoken socialist group shows up to educate the servants on the unfair distribution of wealth, we're reassured that, during those times, stuff like this really happened! Of course, after working their fingers to the bone, the servants need little coaxing to listen, and even begin singing about revolution while their annoyed master looks on. "I'm a very benevolent employer, but these pinko edges I wouldn't allow, I'm afraid," Olliff-Cooper sniffs.

The most tragic character of all, though, has to be the butler, Hugh Edgar, who is a successful architect in real life. Edgar is a dignified older man who's extremely sensitive and thoughtful, and has a melodramatic way of speaking that makes you feel he's constantly about to break down in tears. Although he feels loyal to his master at the outset, eventually he becomes disappointed with him for having so little appreciation for the staff's work, particularly the six-course French meals the chef prepares with only the most primitive tools at his disposal. "The more you give, the less they seem to appreciate it," he says, his face twisted in pain. Damn those landed gentry!

Class war aside, though, the most hilarious aspect of "Manor House" is its ability to present the history and culture of the Edwardian era one minute, and then segue into some delicate but gratuitous inquiry into the young servants' lives the next.

"Ever since Ellen arrived," says the narrator about the new scullery maid, "hall-boy Kenny has been spending all his time in the kitchen on the pretext of wanting to learn how to cook."

Soon, Ellen confesses to the camera that she and Kenny are in love, and that she enjoys "the excitement of having to sneak around, and he's just wonderful ... um, and uh, just ... God!" Uh-huh. Roger that.

Strangely enough, after pounding home the importance of discipline and strict rules for several weeks, the butler doesn't really crack down on the couple. He merely requests that they not emerge from the bedrooms smoothing down their hair and tucking in their clothes.

But it's sort of nice to see PBS get a little racy. And, while the marathon programming of six hours in three days is a lot to ask, even of those nutty PBS audiences, such scheduling certainly fits in well with the show's sadomasochistic theme. Although it's slow at times, "Manor House" manages to re-create some of the social tensions of the Edwardian era, and offers a palpable demonstration of the intense labor and difficult lives of the servant class.

It still seems better than being a common streetwalking prostitute. But maybe that's just me.