Jeff Blitz's delightful documentary on the National Spelling Bee and its grammar-school competitors will win your heart. Whether or not you can spell "opsimath." 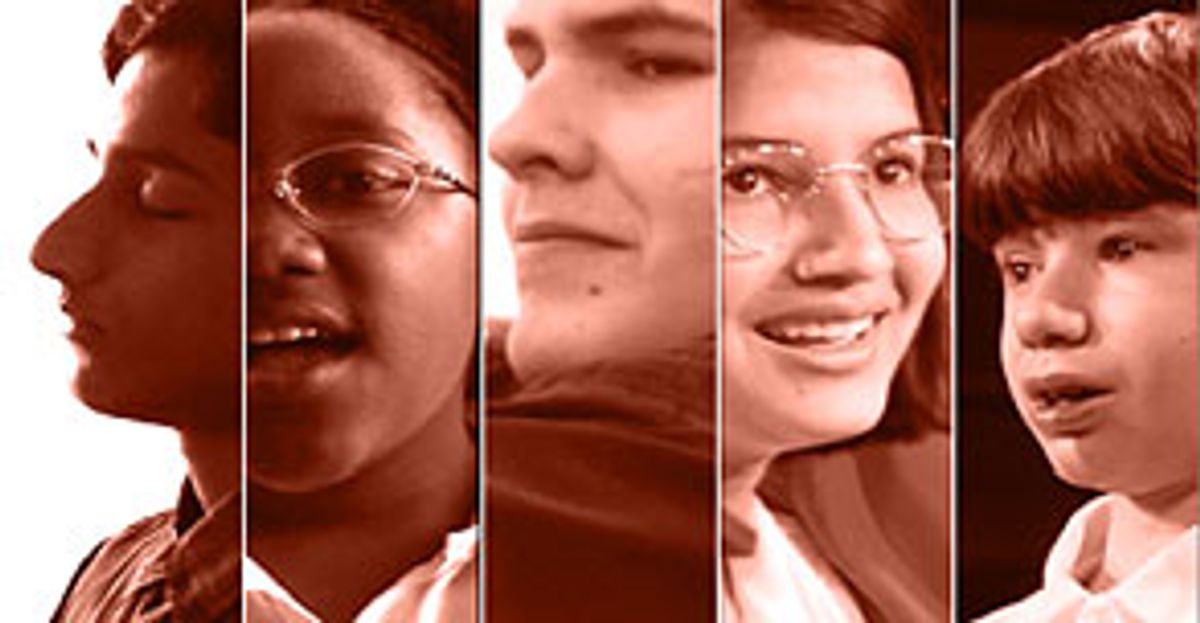 Being an instinctively good speller is one of those things that stands you in good stead for life. And yet there's something mousy and insignificant about it as a skill -- knowing how to spell weird words is not like being good at, say, bread making or water-skiing or oil painting. The upside is that in written communication, you're not likely to embarrass yourself by making ridiculous mistakes, such as not putting the right number of R's in "embarrass." But that's not the same as wowing 'em by pulling a perfectly formed chocolate cake from the oven. As a good speller, at best you're likely to be praised for your attention to detail. And at worst -- well, nobody is going to notice at all.

Jeff Blitz's indescribably pleasurable documentary "Spellbound," which traces the fate of eight contestants in the 1999 National Spelling Bee (a competition for grammar-school students held each year in Washington), is a tribute not just to the young people nationwide who actually make it to the bee, but to good spellers everywhere. ("Spellbound" opens this week at Film Forum in New York before, let us hope, making its way to a theater near you.) There's just no way to glamorize spelling, yet Blitz recognizes the pedestrian beauty of it. The eight kids he chose to profile -- kids from different parts of the country, with varied social and economic backgrounds -- are all extremely intelligent. And yet, being kids and operating well outside the world of grown-up thought (or at least what passes for it these days), they barely know what intelligence is.

When Ashley, a young African-American girl from Washington, D.C., describes her status as a loner, she doesn't come right out and say that she spends a lot of time by herself. She tells us she doesn't go outside much -- the girls "just stand around talking about things," and the boys are usually obsessed with playing basketball. "I don't have any peers, or if I do, I rarely see them," she announces with flat acceptance of the situation, unaware that her syntax has a vaguely formal elegance, like a line from Dickens.

None of the kids in "Spellbound" are awkward misfits or serious eggheads, at least not in any spectacular way. But we see how each one is just a little bit outside the world of his or her peers, and not just because most of them are working hard, studying for the big bee. Ted, a polite, quiet, strapping kid from a small town in Missouri, notes, "There are a couple of smart kids in my class. But not many." There's not a shred of egotism in the statement -- Ted is simply stating what he sees as a fact, attaching neither pluses nor minuses to it. But the comment makes us understand immediately how hard it must be for Ted to find people he can talk to.

Blitz doesn't go out of his way to ferret out evidence that these kids are in any way unhappy or troubled, because there doesn't seem to be any -- for the most part, they seem solid and well-adjusted. But he's still keyed in to the essential loneliness that many kids -- spelling-bee champs or not -- feel at this age. His openness to what these kids are going through fills out the corners of the movie; it's unwaveringly humanistic, in addition to being funny and suspenseful.

And how can you not laugh when, in the Florida hometown of Nupur -- the charming, well-spoken and well-balanced daughter of Indian immigrant parents -- the local Hooters spells out "Congradulations Nupur" on its roadside sign? Even more significant, Blitz captures the intensity of the bee itself, showing how it frazzles the nerves of even the most well-prepared spellers as, one by one, their colleagues and competitors drop away.

Blitz also shows us how these kids relate to their parents, some of whom design drill-sergeant strategies to help their children do well in the bee and some of whom simply enjoy helping out by reading off the words in the kids' practice books. We meet Angela, from Texas, the daughter of Mexican immigrants who never learned to speak English; for them, and for Angela herself, the mere fact that she has made it to the national bee represents complete fulfillment of all the promise they came to America for. That's a marked contrast to what the bee means to Emily, of New Haven, Conn., a girl who takes riding lessons and at one point considers inviting her au pair to accompany her to the national competition.

Blitz makes a sharp contrast between the two girls' different worlds, but he doesn't do them the disservice of assigning false weight or virtue to one world or the other. Emily's parents don't need Emily to do well in the bee. But you can see that they're excited that she has the opportunity to compete; they can't help being proud of her. The comfortable beauty of their home doesn't automatically make them villains, even though it's obvious that a girl like Angela could benefit enormously from winning the national bee (the prizes include scholarship money), while Emily will do just fine without it. "Spellbound" is a straightforward picture, but not a simplistic one. Blitz made it on a relatively small budget, doing his own camerawork, and the movie's co-producer, Sean Welch, did the sound (after getting a crash course from one of Blitz's friends). But what Blitz and Welch don't have in money they make up for a hundredfold with good intuition, zeroing in on just the right details -- funny ones, telling ones and some that are extraordinarily moving. Most of the kids who strike out in the bee have a sturdily cheerful attitude about it, at least in front of the camera. But one of them, and I will not reveal who, is so disappointed -- and possibly simply embarrassed at having mangled her word -- that she averts her face from the camera and crumples into her mother's arms. Blitz doesn't push the moment; his camerawork is direct and intimate without being intrusive. But he does make us feel the significance of what's happening. We don't pity this young girl (what we've seen of her earlier doesn't allow for that), but it's impossible not to feel how piercing her disappointment is.

Blitz may be exhilarated by the concept of the bee (which, incidentally, is televised on ESPN each June, an enthusiastic, if not wholly realistic, suggestion that etymology can be just as thrilling as NASCAR racing). But he's not oblivious to the stress it causes the children in the heat of competition. Even the ones who derive some enjoyment out of the event seem a little relieved when they strike out, some of them skipping a little or waving cheerfully as they strut off the stage -- they know that at last the pressure is off.

I can relate at least somewhat to their anxiety: After winning my school bee in eighth grade, I went on to the regional bee in my area. But I never made it anywhere near the National Bee, striking out on my first word in the regional competition, "hyperbole" (which, as a colleague of mine pointed out, is an ironic word for a future critic to have missed, but there you go). I was relieved to be done with the whole thing: The eighth-grade version of the person I would eventually become thought that spelling bees were decidedly uncool (though, as I recall, none of my classmates ever teased me about it -- in fact, they were pleased and excited for me).

But I did walk away with a Webster's New Collegiate Dictionary, bound in brown leatherette with my name spelled on the front in gold, which long ago began to fall apart but which I still use almost daily. I'm grateful to have it by my side right now to locate words like "hellebore" (a genus of herbs of the buttercup family), "terrene" (an adjective meaning mundane or earthly), "logorrhea" (excessive and often incoherent talkiness or wordiness) and "kirtle" (a tunic or coat worn by men in the Middle Ages), all words that stumped me as I watched "Spellbound."

But what about "clavecin," "helioplankton," "cabotinage" and "opsimath"? They're not in the Little Dictionary That Could, which is comprehensive enough to include most of the words you're likely to encounter in an average day, but not big enough to include some of the real doozies thrown out to the contestants in the national bee. Like Blitz, I salute the kids who studied those particular words or didn't, who spelled them correctly or missed them. And I encourage them to look forward to a future in which they always put the proper number of M's in "accommodate" and never forget the A in "temperament." Even if they never need to dredge up "hellebore" again.