Anyone with more than three years' office experience, a crappy attitude and little to no attention to detail will savor the delicious torture of "The Office," BBC America's comedy import. 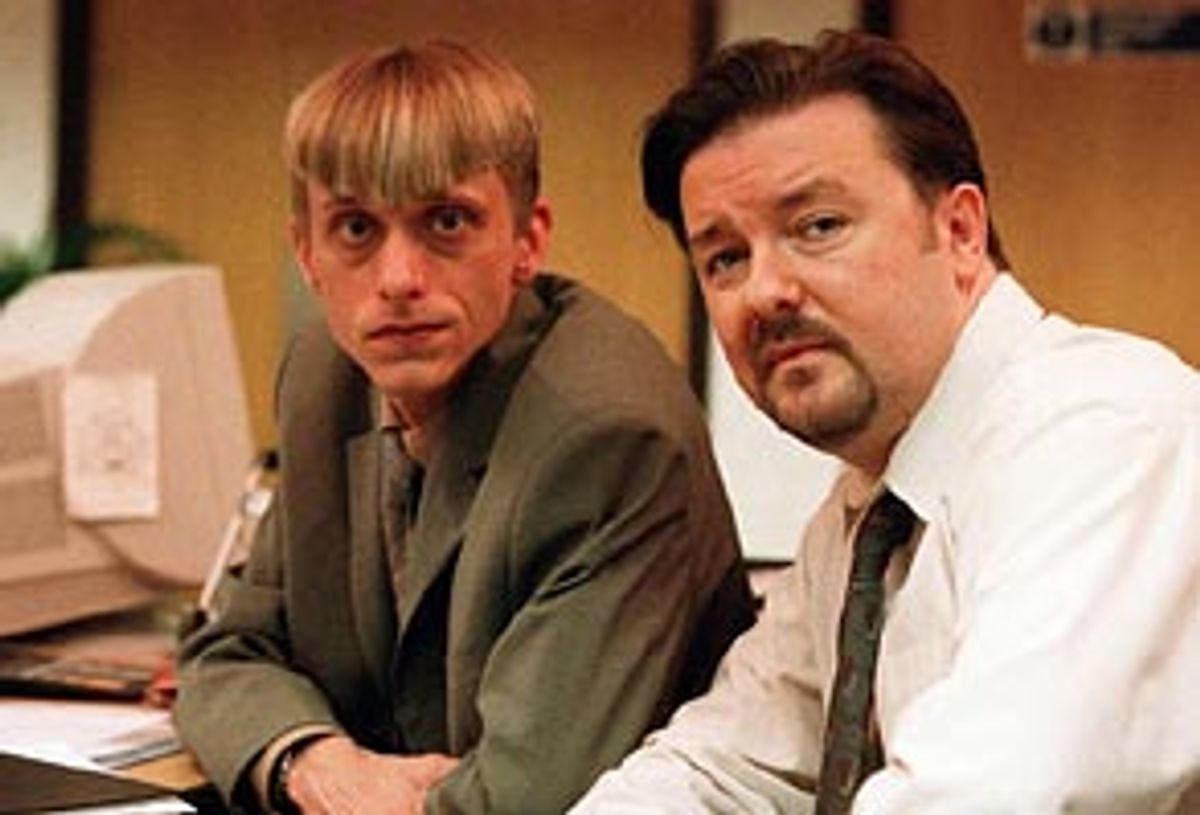 When I was 21 and fresh out of college, I worked for an executive at a large bank who single-handedly guaranteed that I would avoid office jobs for the rest of my life. He was arrogant, tedious, cruel and universally loathed, yet his position ensured that he received little honest feedback from others. Thus, he imagined himself not just talented and courageous but downright adorable, even as his staff seethed, his sales figures suffered and his marriage fell apart. His secretary and I were enlisted to support this myth, taking shorthand as he dictated enraged letters to whoever fell between his crosshairs that day, or giving his girlfriend cute messages when ostensibly he didn't have time to pick up the phone and speak to her himself ("Give Booboo kisses for me. Did you give her kisses?"). Of course I was highly overpaid, or I would've chosen a more dignified job, like stripping.

While it was excruciating to be in the same room with the man, let alone to scurry about serving his needs, it was also fascinating to observe someone with so little grasp of his own poisonous nature, someone who, in any other setting, would have been torn from limb to limb by impassive bystanders within seconds of opening his mouth. Like other current and recovering office handmaidens, I might have put the humiliations and horrors of cubicle servitude behind me, if not for BBC America's "The Office" (Sundays at 10:40 p.m.), a popular British mockumentary that mines uneasy comedy from the awkward antics of a clueless corporate egomaniac.

As anyone with office experience knows all too well, certain work environments encourage exactly those traits and behaviors that would ensure one's untimely demise elsewhere. On "The Office," David Brent (Rick Gervais), the manager of a fictional Slough paper merchant, demonstrates that, in an unregulated setting, arrogance, insensitivity and delusions of grandeur actually come in quite handy. Brent communicates entirely through clichés, self-congratulatory anecdotes, dogmatic digressions and smug asides. He speaks to the camera in a way that forbids passivity. By assuming that you're on his side, he makes you feel dirty for not speaking up against him -- just like a real boss! He's defensive, incompetent and an utter moron, but he fancies himself incredibly funny and cute, a good guy and an even better manager, and he spends his days tooling around the office, yukking it up and imagining that everyone enjoys his fun, easygoing nature when, in fact, they appear pained and uncomfortable most of the time.

This disconnect between David and his staff is disturbingly apparent when his friend Chris Finch, aka "Finchy" (Ralph Ineson), visits the office and the two trade a rapid volley of bad jokes. Despite the fact that everyone else is staring into space, waiting for the awful show to end, David yells at Finchy, "They're cracking up!"

But Gervais' best moments come when David opens up massive cans of worms and, in an effort to round them up, scatters them all over the place. In order to demonstrate his utter hatred of sexism and all things that are degrading to women, David does a search on "sex" and "fetish" and then reads from the screen as his hilariously creepy assistant, Gareth (Mackenzie Crook), looks on:

Gareth: "If anything, they should be rewarded."

David: "They should be equal."

The first time you watch the show, you really don't believe what you're seeing. Each moment feels so real, it's hard to tell if the actors are improvising brilliantly or just delivering their lines with incredible conviction. Like the best moments of "This Is Spinal Tap" or "Waiting for Guffman," "The Office" offers up breathtaking slices of deadpan humor and amazing comic timing.

Most of all, though, "The Office" milks the humor from moments that make you squirm. In a normal office environment, underlings might chuckle along with their delusional boss' awful jokes, but not here. If there were a laugh track, or if the characters laughed out loud at Brent's jokes instead of staring at him blankly, that would ease the moment and provide relief from the tension.

But on "The Office," there is no relief. The show is a wasteland of long, awkward silences. Perhaps the point is to replicate the internal experience of working in a dysfunctional environment, under the control of an intolerable human being. In a real office, after all, underneath your complicity, you're squeamish over how fake and wrong it all is, and how you're going to lose your mind if you spend another minute in such a sick place. Watching "The Office" is almost like a nostalgic journey, a chance to revisit those alienated feelings of yore.

America has no shortage of office comedies. Between "Just Shoot Me," "Good Morning Miami," "The Drew Carey Show" and "Less Than Perfect," you can watch several hours of workplace sitcoms per week. The trouble is, aside from the glass doors and desks that clutter up the background, those shows have as little to do with the reality of working in an office as Mayor McCheese has to do with politics. Aside from old Dilbert books and rentals of Mike Judge's "Office Space," Americans don't seem to have the stomach for realistic portraits of the absurdly torturous microcosm of office life. Luckily, though, since we can't seem to grapple with such queasily disturbing material ourselves, we can import it from across the Atlantic.