The members of the Elder Wisdom Circle have 4,000 years of collective experience at their disposal, and they're sharing the wealth. Dear Abby, step aside. 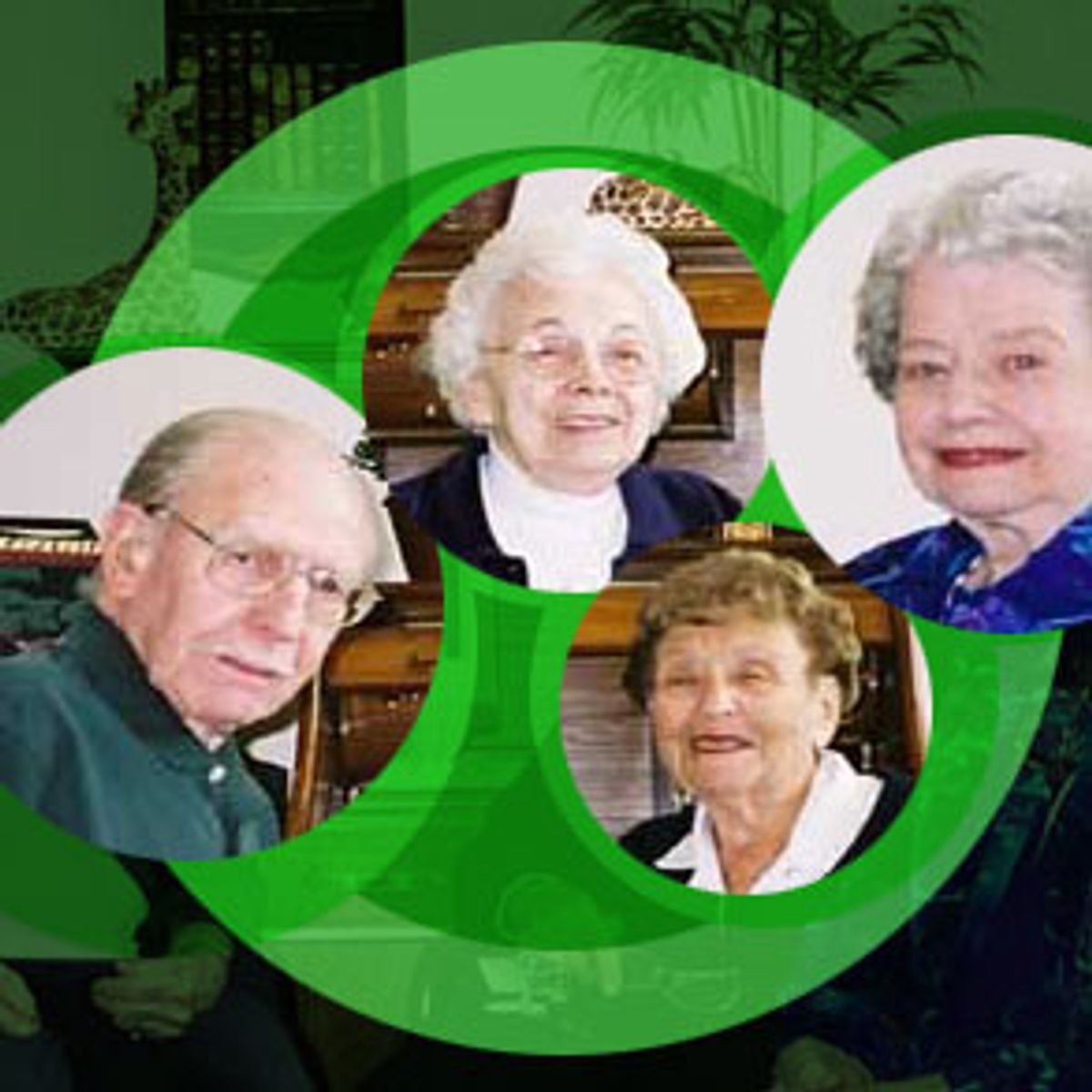 Have you just about given up on finding the man or woman of your dreams? Have you recently been laid off? Are you 18 years old, uninterested in going to college, and paralyzed by your choices for the future?

Or are you just stumped by those black spots on your tangerine trees?

Answers to these, and other questions, are just an e-mail away at elderwisdomcircle.org, a pod of 55 senior citizens with about 4,000 years of collective experience who field roughly 200 questions a week from all over the world. The elders' advice -- sound, reasoned suggestions on just about any topic -- is quick, anonymous and free.

Elderwisdomcircle.org is the brainchild of 41-year-old California businessman Doug Meckelson, who started the site after volunteering with Meals on Wheels in 2001. "I started noticing that the seniors there really perked up whenever I asked them for their input," he says. So he decided to start an online advice column, one in which the seniors he'd come to know and respect could share all their hard-earned knowledge and experience with the world. He launched the site in late 2001, hoping that if he built it, wisdom seekers would come.

And come they did, first in trickles and then in droves, and by 2002, the site was receiving 20 or 30 letters a day, and no shortage of applications from aspiring elders. Today, the site runs smoothly as a joint effort: Some Web-savvy volunteers answer questions from their home computers, others work together as groups from their retirement homes, and have the questions printed out for them so they don't have to touch a keyboard.

"This started as something to make seniors feel better, more involved, more appreciated," says Meckelson, who makes no money from the all-volunteer project. "But then we just started getting more and more letters from young people, even teenagers, and we realized that we were actually filling a need, that there was a whole slew of people who were interested in what the elders had to offer."

Tom, a 62-year-old semiretired contractor who answers letters from his home in Michigan, agrees that feeling involved is what makes the biggest difference. "You get older and you think, After everything I've done, is that all there is? Am I just going to get put on the back shelf? With the site, I can apply all of my knowledge and experience, pain and joy. I've laughed and cried and raised a family, what am I supposed to do, just carve some wooden ducks, or pick up knitting?"

Elders like Tom and 62-year-old Sharon, a retiree from Pennsylvania, work from home on their own, but there are also several groups of elders who live in assisted-living communities and answer letters together, with the help of younger facilitators. Dana Criss, a 29-year-old from Indianapolis, fell in love with the circle eight months ago, when she wrote in asking for advice about romance. "I wanted to know what qualities to look for in a husband," she says. "I kept hearing conflicting things -- you have to compromise, you shouldn't compromise -- and I didn't really know what to do. The elders sent me a really logical and sound response. I started writing them letters as often as I could, on anything I was thinking about."

According to the letter she got back, the ideal husband should provide for her needs, be faithful, never be harsh, always treat her with respect, and make sacrifices for her. And, according to the senior who answered her letter, a sense of humor "wouldn't hurt either."

"Well, no," she chuckles. "I mean I actually got involved right afterwards with a guy who was the exact opposite of everything they suggested. Thank God that's over, but see, that's the thing about being young. We're not governed by logic, we make too many decisions based on feelings. That's what I need the Elders for -- logic. None of this emotional garbage."

Soon after Criss began turning to the elders for counsel, she got a job working with seniors in a retirement home and decided to launch a wisdom circle there. Once a week, she brings in one or two e-mails for a group of seniors, most of them in their 80s and 90s, who don't have access to computers. Then she synthesizes their thoughts and sends a response to the advice seeker. "I feel like when you get to the end of your life, you've amassed a lot of common sense," she says. "You don't care what's popular, you're not trying to please anyone, you're just drawing from your own experience. And nothing teaches better than experience."

To get a sense of how EWC worked, I visited a circle at Chateau Pleasant Hill, an assisted-living community in the affluent San Francisco suburb of Walnut Creek. We meet on a Sunday afternoon, all seated formally around a long dining room table in a faux-Japanese decorated room: Me, Doug Meckelson, Barbara, Betty, Grace, Clyde, Viola, Virginia, Adeline and Evelyn. Not counting myself and Doug, who is facilitating, the average age in the room is 86. The women are all immaculately made up, with styled hair and jewelry in place. Clyde, 94, is unadorned but for a barely visible hearing aid.

Meckelson has brought two letters to discuss. (He tells me later that with older elders, he prefers to bring letters as opposed to e-mails because computers are still so alien to some of them.) He reads the first one slowly, and loudly, pausing several times to repeat lines and answer questions. A 44-year-old divorcee wants to find a man -- not just any man, but one who will accept her 6-year-old son.

"She should go to church," says Clyde.

"Or take a class in something she's interested in," adds Viola, 88, from the opposite end of the table. "I know it's important to have companionship -- I'm looking for male companionship too!"

"Work is always good. I met my second husband at my job. What about work?" pipes in Betty, 81, who later confides that she has no children, but had four husbands.

Viola is not to be deterred. "I want male companionship too. I do -- but not for relations. What I miss," she pauses, "is male talk. Yes, that's what I'd like, I'd like male talk."

The women murmur assent, but Clyde, the only senior man in the room, seems to have nodded off. Meckelson steers the conversation back on track, takes notes, reads back their advice for group approval, and moves on. The next question involves a young mother, exhausted after childbirth, whose own mother told her she should have sent thank you notes within the first month of receiving her baby gifts. Meckelson calls it a "skip-generation question," one in which a reader is clearly trying to jump from one authority figure to the authority figures who "outrank" her mother. "She wants to know what grandma thinks," says Meckelson. Again the group confers.

Adeline: "Six months would be fine."

Evelyn: "She should respond as soon as possible, but people will understand. Having children is exhausting."

Clyde, who seems to have perked up, says, "I'm gonna raise a storm here, but I think you should send thank you notes within two weeks."

"Have you ever had a baby, Clyde?" snaps Evelyn.

"Well, yes," he answers, "and I was in charge of writing the letters. I mean, the woman has enough to do! Why can't the man write the thank yous?"

The women in the room exchange looks. None of us, not Evelyn with the five children, not Barbara with the four husbands, and not yours truly, the 32-year-old member of the so-called post-feminist generation, have even considered this. It took Clyde, born in 1905, married only once, and asleep for half the session, to point out the obvious.

I leave Chateau Pleasant Hills humbled, missing my own grandparents, and ready to write in with a few questions of my own. As Sharon said over the phone from Pennsylvania: "Young people these days, they just don't ever seem to know what to do!"