Eddie Murphy and Steve Zahn confront a chaotic warren of anarchistic kiddies in this silly but exhilarating dads-at-home comedy. 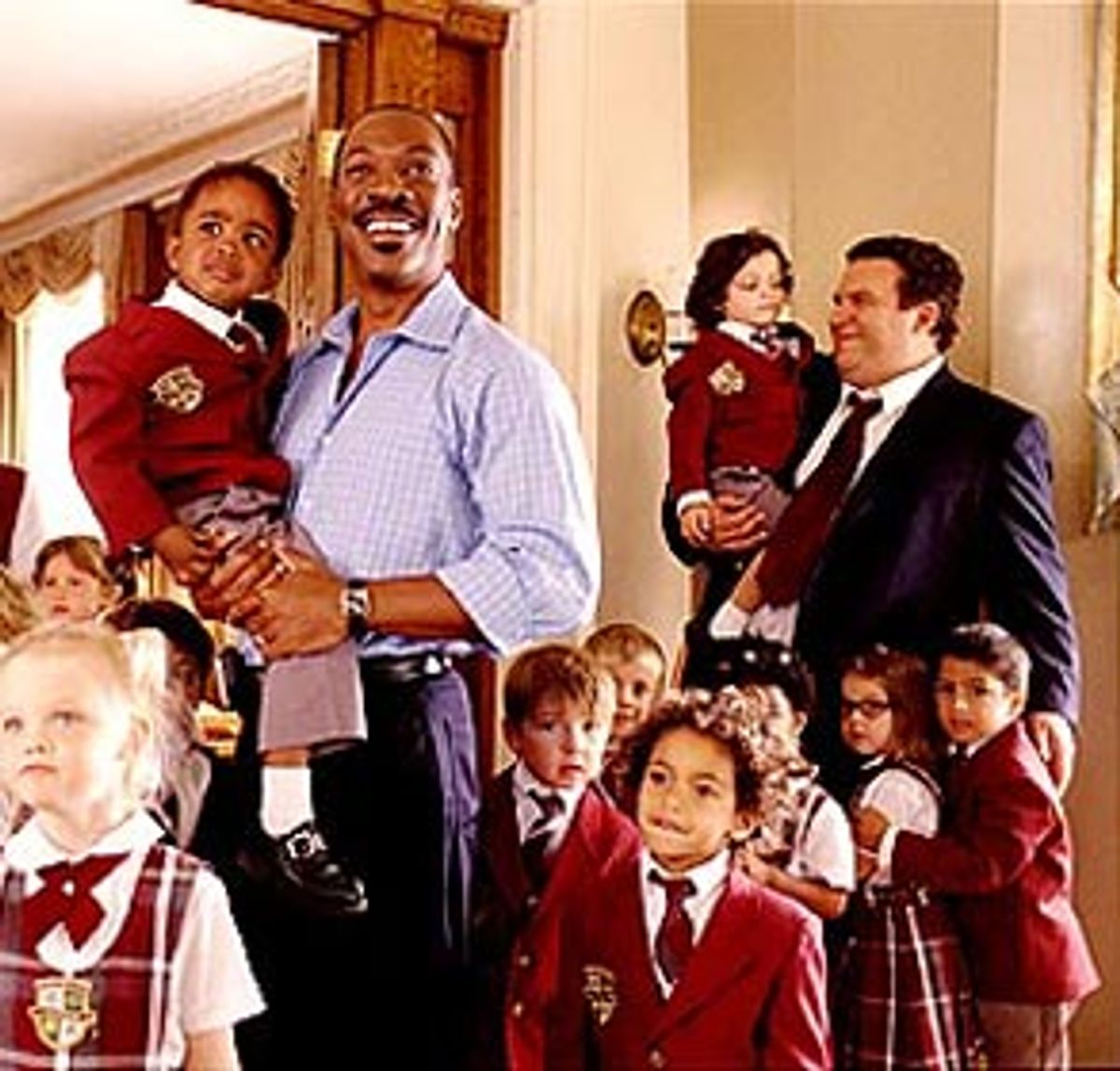 As long as you're not the one looking after them, it's exhilarating to watch a mad jumble of little kids run roughshod over a tastefully appointed living room -- displacing sofa cushions, using vases as footballs, and so forth. It sounds harsh when people who don't like children (or even those who do) refer to them as little savages. Personally, I think they're something much more interesting -- they're natural anarchists. The toddler who lives across the street from me sometimes appears at the front door of his family's brownstone wearing nothing but a movie-star smile. While I don't think it's a good idea for kids to run around naked in this day and age, I can't blame him for wanting to get away with it. It's so exciting to break rules, especially when you've just recently figured out what a rule is.

"Daddy Day Care" hooks into that exhilaration, and the first two-thirds of it, at least, offers plenty of silly fun. Eddie Murphy plays Charlie, who, after being laid off from his prestigious advertising job, has to learn pretty fast how to take care of his young son Ben (Khamani Griffin) while mom Kim (Regina King) goes back to work. After hearing other local mothers complain about the snooty, high-priced preschool that's the only game in town -- it's run by the magnificently named Miss Harridan, played by the equally magnificent Anjelica Huston, a taskmistress in Manolo Blahniks -- he and his buddy and fellow layoff-refugee Phil (Jeff Garlin, of "Curb Your Enthusiasm") get the bright idea of starting a day-care center of their own.

We all know that in the modern world dads often shoulder a great deal of responsibility in raising their children (if they're not the chief caretakers themselves). That's not a particularly progressive notion, and "Daddy Day Care" doesn't pretend that it is. But without resorting to stock dirty-diaper jokes, and without featuring the obligatory scene of Daddy burning the French toast or grilled-cheese sandwiches or whatever, director Steve Carr and writer Geoff Rodkey manage to capture what's funny about the idea of dads being "moms" -- as well as what's perfectly natural about it. As they embark on building their business, Charlie and Phil set up a hopeful lemonade stand and wait for parents to come by to sign their children up. One father, after realizing that the day-care service is to be run by two men, backs away from the lemonade stand as if it were manned by lepers, asserting that men aren't equipped to take care of children. "It's unnatural!" he shouts, before fleeing the scene, child in tow.

I can't imagine any dad who's done serious child-care duty not laughing at that joke. Taking care of kids is hard, period -- it doesn't matter whether it's Mom or Dad who's doing the heavy lifting. The most exquisite sequence in "Daddy Day Care" is the one that details the dads' first day of work, as they welcome the dozen or so kids they've signed up. There's the screaming hippie child who shuts up only when Phil hands him a dollar bill (perhaps he's destined to be the Ben or Jerry of tomorrow). There's the earnest, bespectacled little girl who informs Charlie solemnly, almost before her mother does, that she isn't allowed to eat anything containing maltodextrose. And then there's the kid who's real name is Tony but who refuses to be called anything but Flash -- he comes to day care in costume every day, a miniature superhero with a button nose and a gap between his two front teeth.

I don't want to think about what it must have been like for Carr to direct so many child actors. It could have been hell or it could have been a riot -- most likely, it was both. Charlie and Phil trudge awkwardly through that first day on the job: When things don't seem to be going so well, Phil pulls out an acoustic guitar and leads the kids in a rousing singalong, exhausting his repertoire of songs like "Rhinestone Cowboy" and "Hava Nagila." Lunchtime arrives and we see Charlie and Phil heaping the kids' plates with snack foods in colors not found in nature. (Astute viewers will note the telltale heap of Little Debbie boxes at the center of the table.) Then the potent combination of sugar, preservatives and God knows what else goes to work, and the kids turn into Tasmanian devils, screaming, running, stomping on piano keys, drinking bubble stuff -- generally wreaking havoc on everything around them, all to the tune of the Ramones' "I Wanna Be Sedated."

Somehow the scene is energetic without being garish -- Carr has a knack for orchestrating chaos. (Even the movie's poo-poo jokes are subtle, and one of them is scored, brilliantly, to the same screeching string sound used during the shower scene in "Psycho.") Murphy and Garlin play off each other well -- they jibe each other almost subconsciously, the way longtime buddies do. Then the always-funny Steve Zahn steps into the mix: He's the duo's nerdy former co-worker who joins them in the business after they realize how well he gets along with the kids (he's the one who ascertains that one boy doesn't have a speech impediment but is actually speaking Klingon). Zahn doesn't have to do much to make an audience laugh -- in fact, the less he does, the funnier he is. In one of his best moments, he simply stands before us in a foam carrot suit, his unblinking eyes showing us how hard his character is working to embody the essence of carrotness.

All the actors relate well to the kids. Murphy, in particular, is fun to watch with them: He has a way of talking to them as if they were little adults, always allowing them their dignity. (Once Charlie gets the hang of his job, you can tell he's a natural; reading off a clipboard, camp-counselor style, he alerts the kids to the day's planned activities, which include a Three Stooges film festival in the living room and a meeting of the Thumb Suckers Support Group under the tree in the backyard.)

"Daddy Day Care" is one of those comedies that "thinking" people tend to stay away from, but if you look beyond its admittedly aggressive marketing campaign, you can see that it was made with care and intelligence as well as a sense of fun. The pleasures it offers may be modest, but they're not negligible. "Daddy Day Care" poops out in its last third, leaving us all ready for a little nap, and it's not totally free of sentimental hokum. But what I took away from it was the vision of those wound-up preschoolers, bumping against one another like wayward molecules and generally having a wild time. Just like them, I don't want to be sedated. At least not at the movies.