"The Shape of Things"

Neil LaBute's latest, about a wretched art student who makes over her boyfriend, could be the edgiest film of the year -- if the year were 1982. 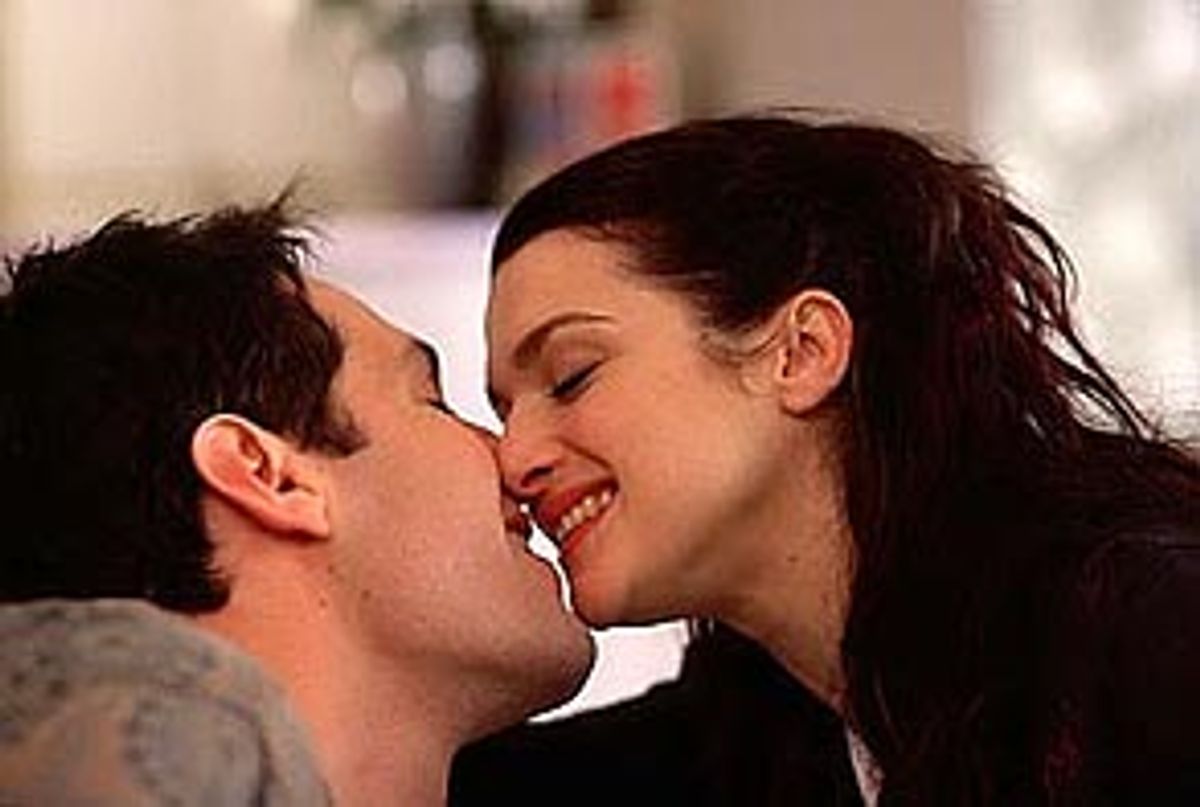 There's often a kind of emotional truth to Neil LaBute's earnest, mannered, fakey-dark dramas. As we used to say in '70s California, he's coming from someplace real, man. In his new film, "The Shape of Things," he absolutely nails the kind of horrific college-age friendship between two guys who actually don't like each other at all, whose every moment together is driven by competition, hatred, misogyny, homoerotic desire and homophobia, all at the same time. If you've ever had that kind of friendship, or even been around it, it'll set your teeth on edge.

But the two guys themselves, a spineless nebbish named Adam (Paul Rudd) and a frat-boy asshole named Phillip (Frederick Weller), never seem even remotely like real people. They're stock characters who seem to have wandered in from other movies -- Adam from Woody Allen's "Sleepers," maybe, and Phillip from, like, "St. Elmo's Fire" -- and been handed this weird script full of torment and angst and painfully artificial dialogue. Not to mention bad feminist performance art, college productions of "Medea," cavernous coffee bars, Elvis Costello songs (circa "This Year's Model") and dueling psycho-bitch girlfriends. This might be the edgiest film of the year -- if the year were 1982.

I think you have to respect LaBute's screen and stage work ("The Shape of Things" is adapted from his long-running play and imports its cast intact) for its evident commitment and sincerity. He's clearly writing from his guts and his heart, which is all you can really ask an artist to do. Those moments of naked and extraordinary emotional connection are not uncommon in his work. He's bravely and unabashedly pursuing Great Drama: His themes are love and hate, men vs. women, the inevitable sadism of human relationships, yada yada yada, and he is self-consciously walking in the footsteps of not just David Mamet, his most obvious model, but also Ibsen, Strindberg, Eugene O'Neill, George Bernard Shaw and Euripides.

So, yeah, emotional truth and all that. But, personally, I'd like LaBute's work a whole lot better if it also presented the kind of truth that was, you know, true. Like if his characters and setting bore some resemblance to the people and places of 21st century America, instead of being, well, whatever they are -- airless caricatures made up of the free-floating tics and fevered ideas of some Kafka-addled undergraduate's imagination. That's what I think, but it genuinely gives me no pleasure to trash a serious-minded artist this way; I appreciate that LaBute's work is the effort of a lifetime, and this mean review will take me no more than a couple of hours.

Some people who saw the stage play have assured me that "The Shape of Things" worked better as theater, and that seems possible. It doesn't help that the movie feels so much like theater of a certain vintage; it takes place at a fictional college in a fictional California town that has seemingly been cut off from the outside world since before the National Endowment for the Arts scandal of the early '90s. (It's probably the same campus where Mamet's play "Oleanna" is set.) At one point, two of the characters go see a performance in which a woman pulls out her tampon and finger-paints a portrait of her dad in her own menstrual blood. (We don't see it; we just hear them arguing about it.) It's supposed to be meaningful that one of them thinks it's profound and the other thinks it's gross. The meaning I got from the scene is that they're both idiots.

Pudgy, disheveled Adam is a student who works as a security guard in the college art museum (which no one ever visits -- one of this film's few truly plausible details). That's where he first encounters Evelyn (Rachel Weisz), an artist-activist who looks darn cute with all those chopsticks in her hair but is also full of doctrinaire pomo ideas and plans to spray-paint a big cock on a neoclassical sculpture whose crotch the museum has covered up. From the very moment of their meeting, we're in symbology land:

Adam: You stepped over the line. Miss --

Despite Adam's ideological miscue, Evelyn tells him he's cute, spray-paints her number on the inside of his security-guard jacket (no pen!) and sets about reshaping him into an acceptable boyfriend. At first it's just exercise and a haircut, but then -- to the amazement of asshole best friend Phil and his mousy blond fiancée Jenny (Gretchen Mol) -- she gets him to ditch his ancient corduroy coat for some Hilfiger threads from the mall, exchange his glasses for contacts, and get a nose job. Oh, and she drags him to the aforementioned performance-art event and compiles an extensive video archive of them having sex. Isn't that what college kids do when they go from geeky to cool?

Weisz is more or less the central figure here, and as always the camera loves her big, dark eyes and fine features, the sense that she's a live wire ready to explode into angry violence or hot sex. But Evelyn is an even more approximate character than the other people in "The Shape of Things," and the question Adam asks about her spray-on-cock project -- "Is this a student thing, or just anarchy?" -- remains obscure for almost the entire movie. She's a likable figure, as agents of disorder and destruction so often are. If she's manipulating Adam, she's also giving him some spine and some sexual identity; if she's prying him away from domineering, small-minded Phil, well, that needed to happen a long time ago. As a person with a comprehensible human agenda, however, she just doesn't cut it.

LaBute is on to something here, as usual. Haven't we all been the person who tried to mold a lover into something we could show our friends, or been the person all too willing to throw away an established identity and reshape ourselves to someone else's gaze? (Or been both?) That's the level where "The Shape of Things" contains some emotional truth, along with the tense, spiteful relationship between Adam and Phil and the unconsummated mutual attraction between Adam and Jenny, both of which, of course, are ready to boil over. (This is what used to be called a "ronde," one of those theatrical exercises in which everybody's going to wind up screwing everybody else, literally or metaphorically or both.)

My view, however, is that LaBute is fighting himself every inch of the way. Every time his characters start to act natural, begin to breathe, live and display ordinary human desire, they bump into the walls of the wildly unlikely plot structure in which he has imprisoned them. The best scenes in "The Shape of Things" -- a violent argument between Evelyn and Phil, or the nice moment when Jenny finally decides to act on her crush toward Adam -- are those that have the least to do with Evelyn's evil, Pygmalion-meets-Dr.-Frankenstein scheme to reinvent Adam. (Yes, Neil, I caught both of those references; your erudition is not wasted.)

On one level, of course, this is nothing more than a question of taste. Some filmmakers I greatly admire, like David Cronenberg and Peter Greenaway, are even further away from naturalism or "humanism" than he is; like him, they seek to find the essential, half-hidden qualities of human relationships and bring them to the surface, sometimes in grotesque or metaphorical fashion. But those guys (and Mamet too) are chilly intellectuals, born and raised. Their gamesmanship and obfuscation are as necessary to their art as Hitchcock's scorn and misogyny or Bergman's wintry search for God. Neil LaBute isn't those guys. He's a square Mormon dude from Wherever, USA, who's working too hard at being cool all the time. If he'd leave the espresso-depresso affectations, the New Wave record collection and the Chekhov volumes alone, I suspect he'd turn into a writer with something to say.