Like Fonzie before him, this too-cool thug in a leather jacket has diverted a good show from its original mission: To celebrate the uncool outcasts of the world. 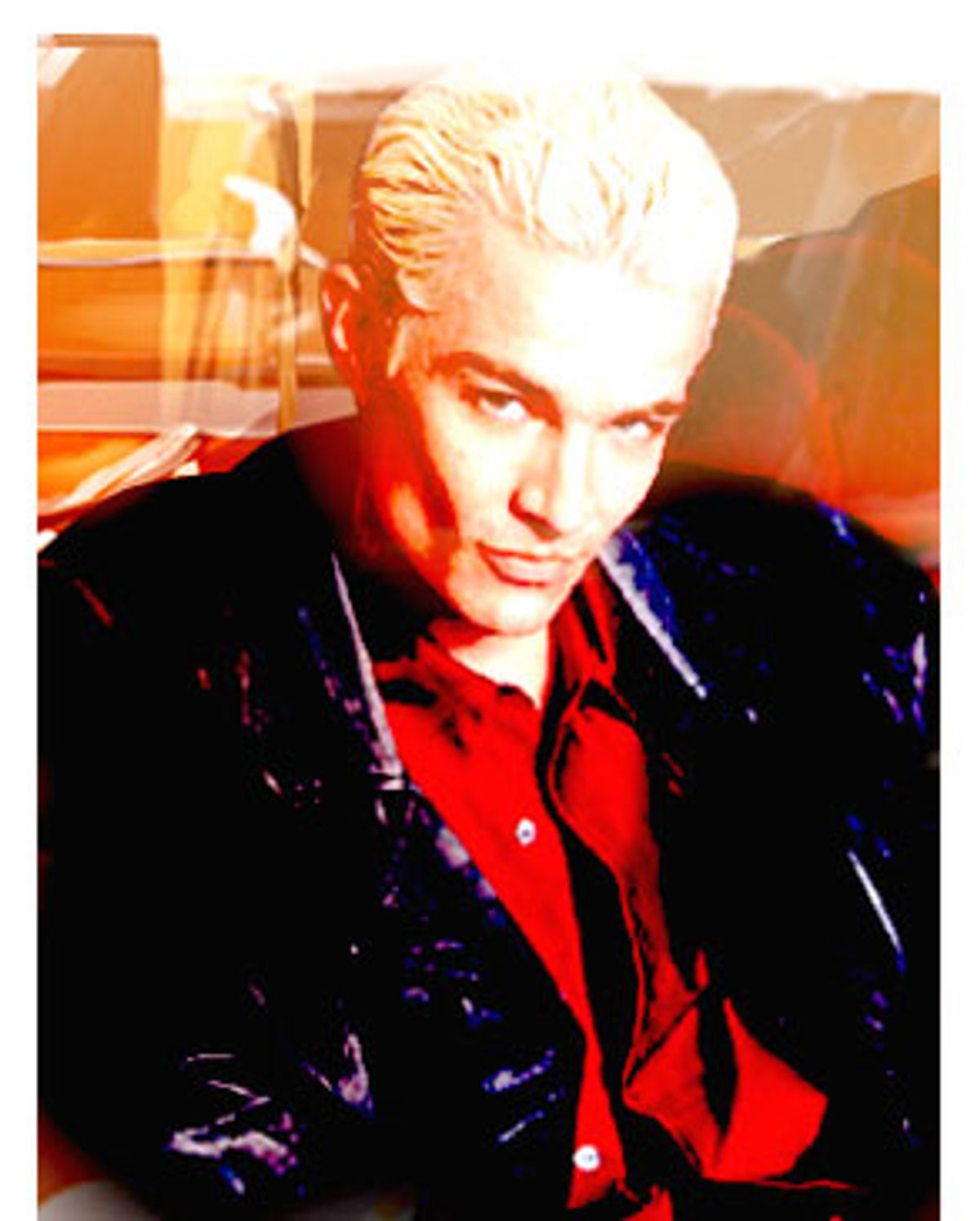 A once-good show becomes a bad one through the unexpected popularity of a posturing, vaguely thuggish minor character in a black leather jacket. In television, as in life, events tend to repeat themselves. First there was "Happy Days," where a charming show about growing up in the '50s was revamped to focus on the Fonz. And now there's "Buffy the Vampire Slayer," which has been all but destroyed by the Fonzie of our time: Spike.

As "Buffy" comes to an end, its fans are debating where to place the blame for the mediocrity of this season. Was it the introduction of a team of Slayers in Training, all of them so annoying that fans were happy to see some of them get killed? Was it the overemphasis on irrelevant new characters like Kennedy and Principal Wood? Was it the decision to build the season around a villain (the First Evil) who can't touch anything or do anything at all except talk and talk and talk? Well, that's part of it.

But the problems with this season can be traced to a moment at the very end of the last good episode, "Conversations With Dead People." That's the moment when Buffy found out that Spike, blond vampire, attempted rapist, and current possessor of a soul, had somehow been killing people despite his souled status. From that point on, the show has no longer been about Buffy and her friends, or Buffy and her mission, or anything that used to be interesting on this show. It's been about Buffy and Spike. And that's about all.

Look at the record. The next two episodes after "Conversations With Dead People" involved Buffy trying to find out why Spike was killing again, following which she spent two more episodes focusing her attention on freeing Spike from a dungeon. Since then, we've discovered that a new character (Principal Wood) has a vendetta against Spike, seen an entire episode devoted to filling out Spike's back story, and sat through various other plot threads about Spike. Even when Spike isn't on-screen, characters are talking about him.

Meanwhile, the characters who used to matter on this show -- Willow, Xander and Giles, who with Buffy formed what is called the "core four" -- are getting nothing storywise; Willow gets a token lesbian relationship, Xander gets his eye poked out, and Giles gets to look like a bad guy for wanting to kill Spike (which, on the contrary, made some of us love Giles even more). In the words of "Sep," who recaps "Buffy" episodes for the famously snarky Web site Television Without Pity, "Watching episode after episode about Spike's journey when Giles has become a prick and I don't know a goddamn thing about what Willow or Xander are thinking, or even who they are anymore, and will likely never find out, breaks my heart."

It would be less of a problem if Spike were getting brilliantly fascinating stories, but he isn't, despite the potential inherent in the story of an evil creature trying to reform. At every turn, the "Buffy" staff has copped out on Spike's story, whitewashing his past (a flashback in a recent episode shows that even when he was turned into a vampire, he wasn't initially a vicious killer -- something that contradicts all the previous vampire mythology on the show) and making no attempt to show that having a soul has changed him one way or the other. By the evidence of this season's episodes, Spike is still a wisecracking punk who likes to hit women (he's hit Buffy, Anya and Faith so far this year) and isolate Buffy from her friends, yet we're still somehow supposed to sympathize with him, because ... why? Because he got a soul in the hope that Buffy would forgive his attempt to rape her and sleep with him again. Except for a couple of throwaway lines, Spike has never been made to seek redemption for his crimes; he doesn't even apologize to Principal Wood for having murdered his mother. The assumption appears to be that Spike doesn't need to atone because having a soul makes him a different and better person. But the writers haven't shown us that; all they've shown us is the same Fonzie figure from Seasons 5 and 6, only without the viciousness that made him moderately interesting.

And when they write a decent Spike scene, it gets cut. The second episode of this season, "Beneath You," was originally supposed to end with a scene where Spike expresses guilt for his past crimes, admits that he got a soul for selfish reasons (he thought Buffy would love him if he had a soul), and arrives at the realization that having a soul hasn't made him good enough for Buffy ("God hates me. You hate me. I hate myself more than ever"). But creator Joss Whedon rewrote this scene so that Spike talked mostly about the fact that Buffy "used" him for sex -- just another attempt to create unearned sympathy for Spike and deemphasize his past role as a killer and sexual predator. And James Marsters, a good actor who has shown himself capable of the kind of underplaying this show used to thrive on, made matters worse by playing this scene as an over-the-top fit of lurching and moaning, like one of William Shatner's lesser method moments on "Star Trek." (The gratuitous shirtlessness just adds to the comparison.) Any interesting stories about a vampire with a soul have already been told on "Buffy" and "Angel"; with Spike, all we've been getting is a lot of half-naked posturing.

But it's not just the overemphasis on Spike that's the problem; it's the way this emphasis has betrayed one of the most appealing themes of the show: that it's OK to be uncool. "Buffy" began with a high school girl, formerly cool and popular, who discovers that she has a destiny that will prevent her from ever having a "normal" life. But she finds some comfort when she befriends people at the school who are social outcasts for other reasons: Willow, a shy computer geek; the loyal but socially awkward Xander; and Giles, head of a school library that none of the other students ever seem to visit. The bond between these four characters was the heart of the show for the first four seasons, more than anything else, even romance (there were many episodes where Buffy's love interest, Angel, didn't appear or was relegated to one or two token scenes). Every week, these characters proved what we'd all like to believe when we're outcasts in high school: that the uncool kids, the ones no one takes seriously, are really the coolest and most heroic of all.

To make this clear, the monsters on the show were often portrayed as the twisted embodiment of high school coolness. In the pilot, Xander's friend Jesse goes from "an excruciating loser" to an effortlessly cool bad boy after he is turned into a vampire. Another episode, "Reptile Boy," made frat boys the villains. And Spike, when introduced in Season 2, was exactly the kind of smartass punk who makes high school a miserable place for geeks: Arrogant, cocky and contemptuous of anyone who wasn't equally cool, he was a superficial, self-confident Fonzie type who deserved to get smacked down by our awkward heroes.

With the transformation of Spike into a lovable antihero, "Buffy" has stopped celebrating the uncool outcasts; instead, it celebrates the cool punk, the guy who would push the first-season Willow or Xander out of the way in the school halls. And it's not just Spike. Willow's new love interest, Kennedy, is a confident loudmouth with a privileged upbringing, who obnoxiously admires Willow not for her intelligence but for her power. Spike's nemesis, Principal Wood, is described in one of the scripts as "The Coolest Principal Ever." And Andrew, the show's answer to "The Simpsons'" Comic Book Guy, is constantly mocked for his geekiness, because a show that was once on the side of geeks now portrays them as buffoons or villains. And whereas the early seasons usually showed the characters learning how to defeat monsters by researching them in Giles' books, they now find everything they need on the Internet -- a far cry from Giles' wonderful first-season speech about the superiority of books over computers. It seems that on a show where an unrepentant mass murdering monster can be a hero, there's no more room for a celebration of the power of book learning, or the nobility of uncool people.

Which brings us back to "Happy Days," and the Fonz. Just as "Happy Days" went on for years with Fonzie even after Ron Howard left the show, there are rumors that the character of Spike may go on after the end of "Buffy" -- perhaps moving to "Angel," or perhaps to a spinoff. The character is popular; cool characters often are. But "Happy Days" was a better show in the first two years, when it was just about the uncool Richie Cunningham. And "Buffy" was a better show in the first four years, before Spike fell in love with Buffy, before Spike started taking his shirt off in every episode, and when the focus was on four uncool people and their quest to rid the world of ... well, of characters like Spike.