Blacks have a better chance surviving a slasher movie than making it to the end of a reality TV show. 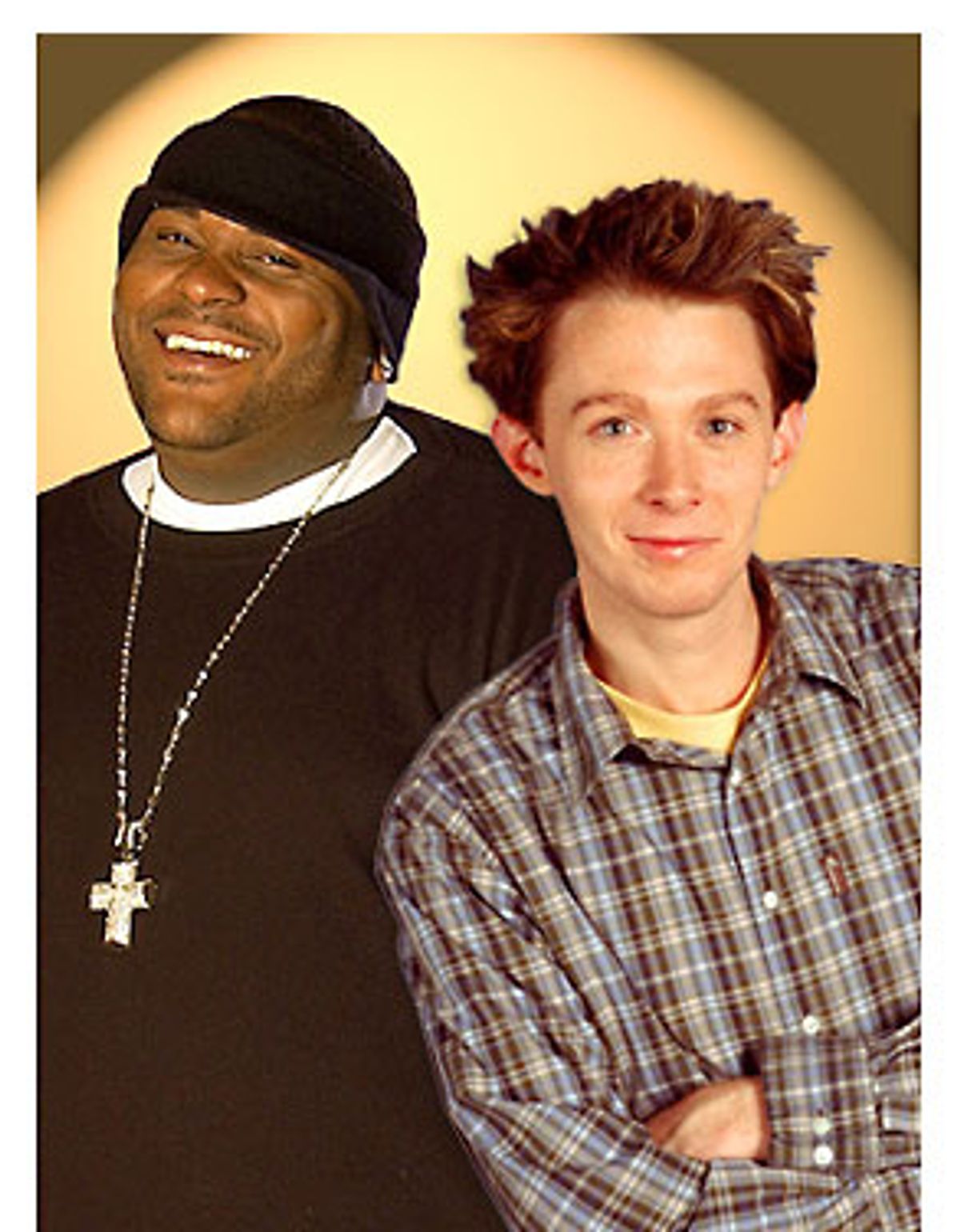 Last year we witnessed the remarkable ouster of Tamyra Gray from "American Idol," which left the far less talented Kelly Clarkson and Justin Guarini to vie for the show's top prize (and the honor of being financially screwed by the show's producers). Many were stunned when Tamyra, and her multi-octave range and vulnerable delivery, waved a tearful goodbye. Many will be equally devastated tonight if the extravagantly talented Ruben Studdard gets cast off by America, too.

But they shouldn't be surprised.For one thing, anyone stunned by what happens on "American Idol" is measuring idolatry by a fairly irrelevant variable -- talent.

Over the past half century, how many teen idols have really been that talented? Elvis Presley, for all his charisma, never wrote a song and had a vocal range of three notes, at best. The '70s brought us Leif Garrett and a TV show centered on Donny Osmond. The '80s brought us Boston's New Kids on the Block, Caucasian clones of another group with nearly the same name. The '90s? Britney, et al. 'Nuff said.

The commonality between all of those idols is that they were cute and white. That's how teen idols tend to look. Talent? There wasn't a New Kid that could hold a vocal candle to New Edition's Ralph Tresvant, but outside the black community, how many can name four of N.E.'s five black members? But while N.E. came and went, New Kids were a brief, but very bright, pop phenomenon -- one managed by New Edition's old manager, coming from the same city as N.E., and essentially a whiter and less talented version of the original. And people were actually surprised that Tamyra got the boot?

Reality TV is holding a mirror to American attitudes on race, and anyone paying attention has to be a little uneasy about what is reflected. On this year's "Mr. Personality," the mandatory mask could not cover one gentleman's black skin color -- and he was the first to get the gate. No black contestants on "The Bachelor" or its clones have come close to a final round. Yes, Vecepia Towery won "Survivor" last year. But most blacks have been voted off quickly. Let's not mince words: Blacks have a better chance surviving a slasher movie than making it to the end of a reality show.

MTV's reality programming has been particularly painful to watch through the years. The first four seasons of the "The Real World" had clichéd black roommates; each one had aspirations of being an entertainer. More followed with the same goal. But more often than not, they were characterized by disagreeable (to put it mildly) behavior. Writer Kevin Powell became infamous for his aggressive behavior on the show's first season. The second season saw David Edwards tossed out for pulling castmate Tami Akbar's blanket off -- and getting tossed from the show. There have been house meetings called because New Orleans' David was being an "asshole" and because Hawaii's Teck let his cadlike behavior interfere with his duties on the job. Aneesa (Chicago), Arissa (Las Vegas) and Ayanna (Road Rules, "Semester at Sea") all got into fights, with Ayanna getting booted from a show after whacking a Nordic castmate who used a racial epithet without realizing exactly what he was doing. Edwards made a return engagement in this spring's "Real World/Road Rules Battle of the Sexes," only to completely melt down after a fight with another castmate (the notorious Puck) and to leave the show in ignominy.

Those shows take place in a vacuum-tight fantasy world. ("The Real World" takes place in a world where no one has to pay rent -- as close to heaven as is attainable on earth.) "American Idol," on the other hand, is as real as these shows can get. Studdard, Clay Aiken and Kimberley Locke have not been "cast" as roommates, for example. They're entertainers competing for a greater share of the market, in prime time, with viewers voting in real time. Like any other budding stars, they have been required to jump through hoops. The quest for a record deal is typically a series of performances for people who may love you or hate you, all dependent on their predispositions. And you are required to give a damn about what they think.

No matter what mathematics may say -- that the odds are against one white competitor facing two black competitors -- there is a fantastic likelihood that Clay Aiken, talented but intangibly unimpressive, will be crowned American Idol. And the clearly superior Ruben (and nominally superior Kimberley) will get the shaft.

The best description of Aiken may have come from Africana.com's J. Danielle Daniels, who dubbed him "technically perfect, emotionally empty." Accurate as that description may be, it's curious that such a statement would fit a man who states on the "American Idol" Web site that the last concert he attended was James Taylor's, and his favorite song is "Unchained Melody." None of the simply expressed yet poignant emotional resonance of Taylor's work is present from Aiken, who seems as free and comfortable moving onstage as a man playing the guitar tied to a chair.

Aiken had a hard time squeezing fun out of "Build Me Up Buttercup." Comparing the feeling in his rendition Tuesday night of "Unchained Melody" to the Righteous Brothers' classic is a task I won't dare undertake, and I can't begin to think of Aiken and Al Green's definitive cover of the song at the same time. But not to call him the odds-on favorite of this competition would make you a fool.

Just keep in mind last year. No matter how much Ruben sounds like a young Luther Vandross, his time is probably up. Incomprehensibly, he's already been in the bottom two of the voting. (Perhaps that was punishment for his bizarre decision to sing "Sweet Home Alabama" on country-rock night? Let's just hope Ruben doesn't really think the folks in Alabama "all did what they could do" about George Wallace.) The comparison to Vandross easily starts with his size -- reminiscent of Luther in the early '80s -- but the similarity runs deeper. Vandross was able to evoke a sweetness in his voice rarely heard in misery-laden R&B. Each note Luther sang rang with a sense of optimism, a rare and beautiful quality that helps set Ruben apart from the "A.I." field, just as it set Luther apart from every other singer of the past 20-plus years.

But there's a strong possibility that Wednesday could be his last night on the "American Idol" stage. Should that happen, déjà vu could set in with those who followed the show in both seasons. Kimberley Locke is biracial, making this nearly the same scenario from which Clarkson emerged last year. And Locke, who got back in Simon's good graces by relaxing her hair -- a suggestion that is curious at best and offensive at worst -- is not likely to win (like Justin Guarini before her), because of her inability to milk any passion out of the songs she sings.

This is where the human measurement comes into play. Those voting on the idol are future fans. And considering all the research done on the digital divide, there's little doubt who's stuffing the online ballot boxes. So it's not a stretch to predict Aiken will be the winner before he sings another note. That is a function of "A.I." reality. Would white teenagers have preferred to hear and see Elvis Presley or Jackie Wilson? Jerry Lee Lewis or Little Richard? New Kids or New Edition? A young John Lennon or Chuck Berry? History has shown us that the white star was preferred in each scenario. Yes, there's been some teen-idol exceptions -- Michael Jackson, Beyoncé Knowles and Lil' Bow Wow come to mind. But on a show as realistic as "American Idol," there's no reason to expect any difference.

That's not insidious in the way the precast reality shows are, where casting directors appear to follow a template, looking for people to fit certain roles, with "angry young black man" a perennial favorite. There's something strangely alluring about these contraptions, reality as conceived by television producers (and we all know how grounded they are) that pose interesting "what if" scenarios and allowing the world to watch them play out. They're experiments in human psychology, both for the "cast members" and viewers. Cast members are willing guinea pigs, thrust into situations that are typically different from their own lives. And viewers are prodded along by shows that tap into their predispositions and prejudices on a number of topics, including, invariably, race.

"American Idol" is no different. History gives me a hunch that Clay Aiken will soon be a millionaire with a recording contract. If for some reason if he's not, it wouldn't just be an upset. It would be unreal.