She loved my "little Timmy" -- but when I tried to end the affair with my biggest client, I got shafted. 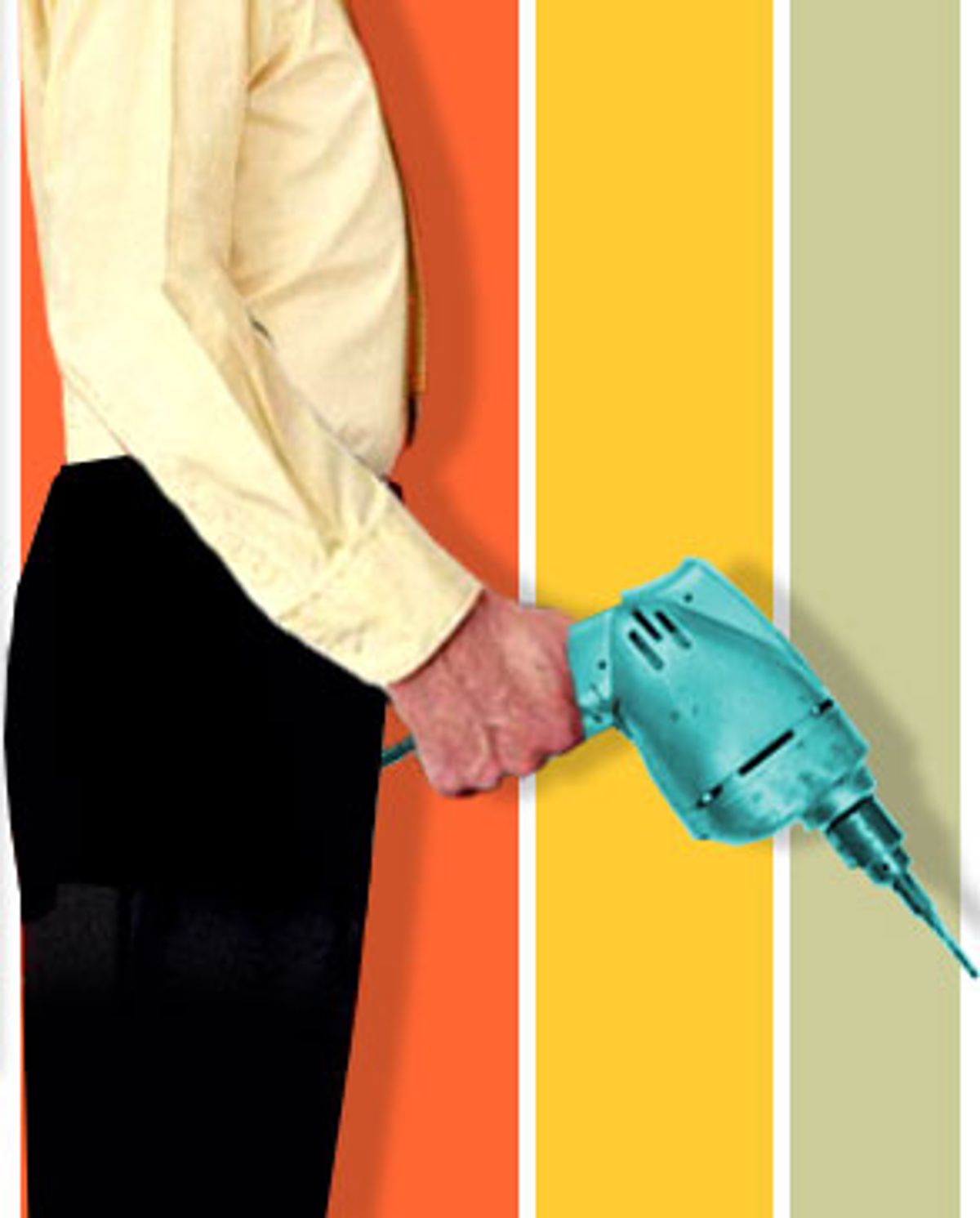 Tim was once a salesman for a printing company.

I hate to tell you this. I mean, I'm pretty embarrassed. But I was working at a company until last year, where I'd been for 10 years. There was the "A Team" and the "B Team" and I was always on the "A Team." They were the salespeople that sold more than $10 or $12 million dollars a year of printing. So there were cruises every year, golf vacations, stuff I won all the time because I sold so much.

I'd never done that sort of thing before because I knew how dangerous it can be. But she had made it very clear that she wanted me. And, once we'd consummated the affair, how much she wanted Timmy. "Timmy" is what she called my penis. "Little Timmy" actually. She had names for every part of me. My balls. (I won't tell you what she called them!) My tongue. My right hand. But Timmy was always Timmy.

She loved Little Timmy, who she said filled her up. Also he had talents at the entrance to the Tunnel of Love. Her skin was very soft there, like little flesh tulips, sort of. And she loved it when Little Timmy kissed her there or, you know, sort of mooshed around, up and down, in and out a little bit. Kind of playing with her there at the entrance for, you know, a long time! Used to drive her to distraction if you want the truth.

Something happens when you display that kind of interest. That kind of playfulness. I was amazed at what power those sorts of "nothing" actions can have. But they do! They have real power. But what happens sometimes is that you get to places where you feel immune to ever being caught, like those securities traders at big companies who lose billions for the company and their clients. Because they feel they'll never be seen, that their abilities to hide money transactions show how smart they are and how they'll get away with the whole thing.

The same thing happened here, only I wasn't trading billions of nonexistent dollars. I was just mooshing around. Like a dummy, I got panicked. I couldn't stand the pressure. Those meetings with my VP of Sales every month, when he'd ask me, "So, Timmy, how's Beth doing over there at the bank?" Of course he meant, "How's the account doing?", not "How's Beth's love life?" But every time he'd ask a question about her, I worried that maybe he knew what was happening.

No, the pressure got to be too much. So I asked Beth, could we stop? Please! Couldn't we just go back to the way it was? Her response was to get so angry with me that she threw me out of the office. Then she called me, time and again, many times. I'd talk with her, but she couldn't understand what my problem was. Weren't we happy? Didn't I love her? She came to my house one night and confronted me with wild weeping. I had to ask her to leave, which only made her more furious.

So my VP called me in after a few weeks and asked me "What's this about Beth?" I asked him what he meant. He told me that she had called him and asked that I be removed from the account. I was untrustworthy. I wasn't responding to her calls. I'd become indifferent to the account, she said, and here she's got a half dozen printers a day calling her for her business.

I mumbled a few answers, which he interrupted by calling Beth while I was there, and asking for an appointment with her. Could we both come to see her? She said yes. So we went. When we got into the office, she went into a monologue about what a silent salesman I'd become, how it was that I seemed so absent, that I didn't care for the account anymore, that I didn't return phone calls, that I didn't send her paper samples, that proofs were always wrong, that I missed appointments -- it was all a lie, but it got me fired, finally.

She had gone on to say that any company that would hire someone like me, any vice president of sales that would hire a guy like me, didn't deserve her business. The VP guy told me later he'd never been so pissed in his life, sitting there taking shit like that, getting blind-sided like that. He said he'd always thought I was a stand-up guy, and here I'd been deceiving the company about my activities. Not returning phone calls! "How could you do this, Timmy?"

I never admitted to him the truth of why Beth was so angry because I felt that if I did he'd not only fire me, he'd probably kill me as well. So I'm out! The company's out. Little Timmy and I got fired, and he's the reason I've got such a bad cash flow problem right now.

You know I worry very much about this. It's as though my penis were my personality, and what's that all about? Power? Maybe, but I'm the one who's powerless now. I thought I wouldn't get caught, and it was all for that feeling of release, that clutch that coming gives you, and all the liquids and the writhing and the movement. It's all so glorious. But in this case it was also all so misleading. I just worry that I'm hanging off the end of it, instead of it's hanging off the end of me.

The father of all letter carriers

John is a printer of religious books in Atlanta. He speaks in a very refined way with a deep Southern accent.

When I was in high school I read a lot. This was a kind of secret endeavor because my friends were the guys on the football team, student government types, and guys who owned and worked on cars. Reading was not their first choice of something to do.

What I read drove me even further into a kind of secretiveness. I liked parlor novels. So, "Little Women" has always been a favorite of mine. I can read Jane Austen over and over again. Barbara Pym is a true model for how to write such stuff. "Mrs. Dalloway." I was a guy, nonetheless. I mean, a guy. I did sports and became an outdoorsman, a skier, a hiker. Women have always told me that that's a source of my appeal, that I am such a guy.

What they haven't always known is that this particular guy is interested in 19th century women's dress, in the unexpected revelation of love in a letter to the heroine from an unknown admirer, in the details of a ride through the English countryside in a chaise-and-four. In the way sisters help each other find a beau. In the worried meddling of mothers. Even when I've told women about my reading, they still have told me "Gee, that's wonderful, especially in someone like you who's so obviously -- a guy!"

So a few years ago I decided to just look at myself. I mean, literally. In the mirror! I hadn't thought about it much, if ever. What does a guy look like? I mean, I know what a guy looks like, but I'd never really looked steadily at myself to see what it is that makes me a guy. There were a lot of things. My chest is big, muscular. My legs, too. The feet and hands aren't so big, but they're thick, especially my fingers. When they're resting on my chest, they wouldn't be mistaken for a woman's hands. I looked at all kinds of things. My upper legs. The way my feet approach the floor when I walk. All kinds.

But what I found myself not looking at was my penis. It was as though I wasn't supposed to look at it. It's not something that I've paid a lot of attention to in my life in any case. It's just a part of me, and I haven't much thought about it as a being unto itself. But when I realized that I was being prudish, that I was being shy about my own penis, I decided to go ahead and have a look.

This was a revelation because I quickly realized that I was observing the part of my body that is most spectacularly intimate. It's the channel that delivers my entire genetic make-up to someone else! The whole message that I have to give is contained by that penis for those few seconds of passage, as my sperm surges up it in a mad race for release, for embrace, for connection, the intimate connection with someone else's message. It's filled with nerve endings, and each one of them is seeking release, a glut of release. So it plunges into the closest of intimacies, and glories in it when it gets there.

Knowing this, I look at my penis now whenever I have the chance. The father of all letter carriers! This has also helped my reading. I now know that novels are a similar form of intimacy to what I found in my penis. They bring the glut of feelings and thoughts that the writer has to offer. The book is the penis that, in a desirous frenzy of words, gives me the message.

What I've always liked in the novels I read is the sensuous detail. The women and men who write such books understand that perfectly, so Jane Austen, with all her delicacy, is writing all the time on every page about sensuality. I wonder if she realized that, pen in hand, she was fashioning a penis of her own.

James is a wealthy man with a tight, pursed demeanor who parlayed millions in inherited money into many more millions through his management of a group of news and media companies. He is 60 years old and a very conservative Republican.

I was going back to Yale for my second year, and my father was driving me to the railroad station. Whenever you looked at my father, no matter what time of day or night, chances are he would be wearing a dark blue suit, a white shirt, dark tie and black shoes. I'm not sure he even owned a pair of brown shoes. He was a gruff man. His patrician clothing and frigid manner, his distance from everyone around him, belied his very occasional salty humor.

During our drive to the station in his Packard, he engaged me in the first conversation I ever had with him about male sexuality, the function of the penis, about my sexuality and my penis in particular.

"James," he said, turning a corner, "we've had to send too many of your sheets to the laundry lately."

That was it. I went back to Yale. The remark was typical of my father. Deadpan. Understated. Dry. Hilarious. But I have a large regret about that day. That is, that one of the most humorous opening gambits toward a really important conversation I've ever heard was not an opening gambit at all. It was a closing gambit, an endgame. My father and I never talked about sex again.

Terence Clarke is a novelist and screenwriter in San Francisco.