It was a story that thrilled all America. Too bad it wasn't true. 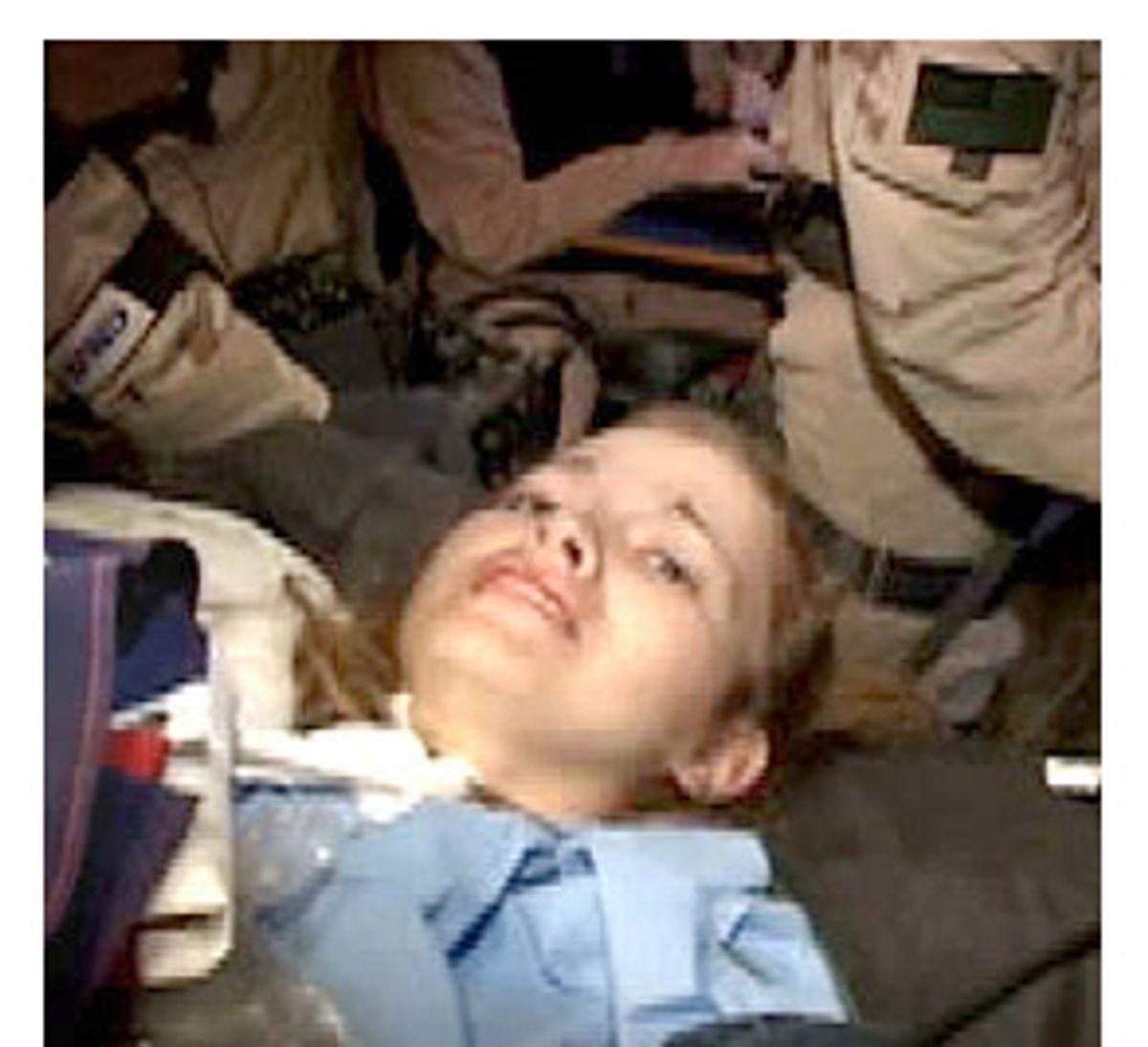 Editor's Note: It was one of those daring escapades that define a war in the public's mind: On April 2, a band of U.S Navy SEALs boldly swept into an Iraqi hospital to rescue teenage soldier Pfc. Jessica Lynch from hellish captivity, an act of heroism captured in dramatic fashion by the raiders' video cameras. But according to recent press reports, several coming from Canada and the U.K., it now appears that the Defense Department's account of the storming of the Nasiriya hospital was grossly inaccurate and heavily dramatized by the Pentagon's savvy propaganda experts. As John Kampfner, who hosts a BBC exposé on the raid that airs this Sunday, wrote Thursday in the Guardian, "[Lynch's] rescue will go down as one of the most stunning pieces of news management yet conceived. It provides a remarkable insight into the real influence of Hollywood producers on the Pentagon's media managers, and has produced a template from which America hopes to present its future wars."

But if the foreign press has revealed the official version of the Lynch "rescue" to be a patriotic fairy tale, the media at home has generally been loath to let go of the thrilling yarn that they eagerly sold to the American people. And NBC is still at work on a TV movie about the saving of Pfc. Lynch that the network hopes will further captivate the public.

Barry Lando, an award-winning producer for "60 Minutes" for 30 years, offers the following satirical look at the wave of panic that might have been set off in NBC's corporate suites as the foreign press began to demolish the Lynch story. Any resemblance between NBC executive "Martin Skolnick" and his dutiful employee "Irene Kramer" and real-life network officials is purely coincidental.

Re: Saving Private Lynch: The Made for TV Movie

We've got problems. We thought it was to be the story of Gulf War II: winsome, courageous, blonde 19-year-old U.S. private from West Virginia, caught in an Iraqi ambush after her unit takes a wrong turn and taken prisoner by brutal Iraqi soldiers. Her family, her home town, all America, despair. Ten days later she's dramatically rescued: While Army Rangers stage a diversionary raid, Navy Seals -- with a military cameraman along to capture the whole incredible story -- storm the Iraqi hospital where she's being held; come under fire as they leave but chopper her to safety; then tearful reunion with family and proper medical treatment, at last, from caring American doctors and nurses.

We're racing to get the film out first. We've dug up a slew of facts to flesh out the tale. Unfortunately, it isn't quite the Sylvester Stallone saves Meg Ryan saga first put out. For instance, the Washington Post's breathless account right after the rescue quoted a U.S. official saying that the valiant supply clerk continued firing at the Iraqis even after she sustained multiple gunshot wounds and watched several other soldiers in her unit die around her. "She was fighting to the death," the nameless official said. "She did not want to be taken alive." That story ran around the globe. Unfortunately, it was later knocked down by the Army colonel who runs the military hospital in Germany where Jessica was taken. He said the evidence "did not suggest that any of her wounds were caused by either gunshots or stabbing."

OK, then comes the period of captivity. Another glitch in the story line. Some witnesses say she was slapped around by Iraqi military guards, but it's still not clear how seriously she was mistreated.

We can finesse that, but the problem is that the Iraqi hospital staff did everything possible under very tough conditions not only to protect Jessica from her captors, but also to care of her as if she were one of their own family. This according to reporters from CNN and several newspapers who have interviewed hospital staff since the rescue.

The Iraqi doctors say Jessica arrived with several fractures and a cut on her forehead, probably incurred when her vehicle overturned after it was hit by a rocket-propelled grenade. At the same time, however, the hospital was overwhelmed with casualties -- more than 2,000 wounded, another 400 dead, almost all of them civilians. Despite severe shortages, the staff tried to give the wounded American soldier the best of whatever they had, from a platinum plate to mend one of her fractures, to two bottles of their own blood, because hospital stocks were totally depleted.

So she wouldn't feel too homesick, they brought their children around to visit with Jessica and managed to scrounge orange juice and cookies for the frightened soldier. Her Iraqi nurse, Khalida Shinah, who has three daughters herself, did everything she could to comfort the young private, constantly reassuring her, singing her to sleep some nights. Jessica supposedly told her she was going to take her back to America with her.

So that kind of muddies the waters further. Just the same, we find a way to deal with that plot twist: Good Iraqis fight bad Iraqis to save Jessica.

But now comes the kicker. When the Navy Seals, armed to the eyeballs, crashed their way into the hospital -- there were no Iraqi troops there. They had left almost two days before, when it became apparent that the U.S.-led coalition was about to take Nasiriya.

Which raises a sticky question: After the rescue, a military briefer told reporters that there were firefights not inside the hospital but "outside the building getting in and out."

Hostile fire from whom?

According to the hospital staff, all the military and Baath Party officials who had earlier been using the hospital as a headquarters stripped off their uniforms and military boots and hightailed it out of town.

But -- and this is the wildest part, as Dr. Harith al-Houssona told the Guardian and the Toronto Star, two days before the American raid, a few of the senior hospital staff attempted to send Jessica back to the Americans in an ambulance. "I told her I will try and help you escape to the American Army," he said, "but I will do this very secretly because I could lose my life." They bundled her into an ambulance and instructed the driver to take her to the U.S. checkpoint, just a kilometer away. "But when the ambulance got within 300 meters, they began to shoot," said Dr. al-Houssona. "There wasn't even a chance to tell them, 'We have Jessica. Take her.'"

So the ambulance brought her back to the hospital.

Now comes Rambo: Just after midnight April 2, the hospital staff suddenly hear Special Operations helicopters circling above. Fearing the worst, they race for the X-ray department, which has no outside windows. The power is cut. There are explosions, and American raiders come blasting through the locked doors. An American screams: "Go! Go! Go!''

According to the Star, "Seconds later the door burst open and a red laser light cut through the darkness, trained on the forehead of the chief resident. 'We were pretty frightened. There were about 40 medical staff together in the X-ray department,' said Dr. Amar Uday. 'Everyone expected the Americans to come that day because the city had fallen. But we didn't expect them to blast through the doors like a Hollywood movie.'"

The doctors said they then led a U.S. medic to Lynch's room.

But it didn't end there. As the London Times tells it, "Four doctors and two patients, one of whom was paralyzed and on an intravenous drip, were bound and handcuffed as American soldiers rampaged through the wards, searching for departed members of the Saddam regime."

OK, they were plastic handcuffs.

Some of the staff also led the troops to a nearby graveyard, where they recovered the bodies of nine American soldiers. All were dead on arrival, the doctors said.

The doctors said the Americans were there for about three hours. "When they left," said one, "they turned to us and said, 'Thank you.' That was it."

Not quite. The hospital staff found that, altogether, 12 doors had been broken in the raid, a sterilized operating theater contaminated, and the specialized traction bed in which Pvt. Lynch had been placed was shredded. Also, according to the London Times, a hospital administrator who had taken shelter in Lynch's room was seized by the departing U.S. soldiers and taken to their base, where he was held for three scorching days in an open-air prison camp.

Three days after the raid, an American military doctor showed up at the hospital. He came, he said, to thank them for the superb surgery.

"You do realize you could have just knocked on the door and we would have wheeled Jessica down to you, don't you?" Dr. Mudhafer Raazk replied.

Which raises another ticklish question: According to two different reporters, the day before, the raid, a waiter from Nasiriya's al-Diwan restaurant is approached near the hospital by U.S. Special Forces with an Arabic interpreter, and they ask him if any Iraqi troops are still in the hospital. "And I say, 'No, they're all gone,'" the waiter replied.

There's more: Fox News reports that, to confirm Jessica's location, "officials with the Defense Intelligence Agency equipped and trained an Iraqi informant with a concealed video camera. On the day of the raid, the informant walked around the hospital, videotaping entrances and a route to Lynch's room."

If true, wouldn't the military planners have known there were no Iraqi forces inside the hospital when they made the raid? Were the slam-bang commando tactics mostly for show? According to different interviews with the doctors, there were anywhere from one to three cameramen in uniform with the raiding team.

These days, when told of stories that Lynch was abused while in their care, the hospital staff are outraged. Said Nurse Shinah: "This is a lie. But why ask me? Why don't you ask Jessica what kind of treatment she received?"

In fact, the Iraqi accounts of good treatment for Pvt. Lynch were corroborated by Pam Nicolais, a cousin serving as a spokesman for the family, in an interview with the Herald Dispatch in Huntington, W.Va. "That goes along with what Jessi told us," she told the paper.

Yet the same day, Fox News ran the story that Jessica can't remember anything that happened after her unit was ambushed through her 10 days of captivity. "She basically has amnesia and has mentally blocked out the horrible things we strongly believe she went through," one official told Fox.

So there you are, Marvin -- one of the messiest story lines I've ever had to deal with. Over to you.

Kiddo, don't worry about the mess. That's what our high-priced writers get paid to clean up. It's a question of shaping, trimming, like keeping a plane on course. What people remember are the first sensational reports they heard, not the page 17, nit-picking follow-ups. We'll keep the issues uncomplicated, black and white, like G.W. Bush: evil vs. good. Don't muddy the waters by asking too many whys, putting in too many shades of gray.

For that matter, Gulf War II itself was a made-for-TV film, from the first breathtaking sound and light show over Baghdad, to George W. B's sensationally scripted jet landing on the Abraham Lincoln.

You gotta understand that what people want is something simple to believe in. Jessica's rescue gave Americans that; it gave us -- and our president -- a shot in the arm when we most needed it. And believe me, that's the way we'll tell it.

P.S. Re your memo: Thanks. I've deleted it from my hard drive and backup. Make sure you and your staff do the same.