Harley-Davidson's new motorcycles are built to meet noise and pollution standards. But bikers say they miss "the sound of rebellion." 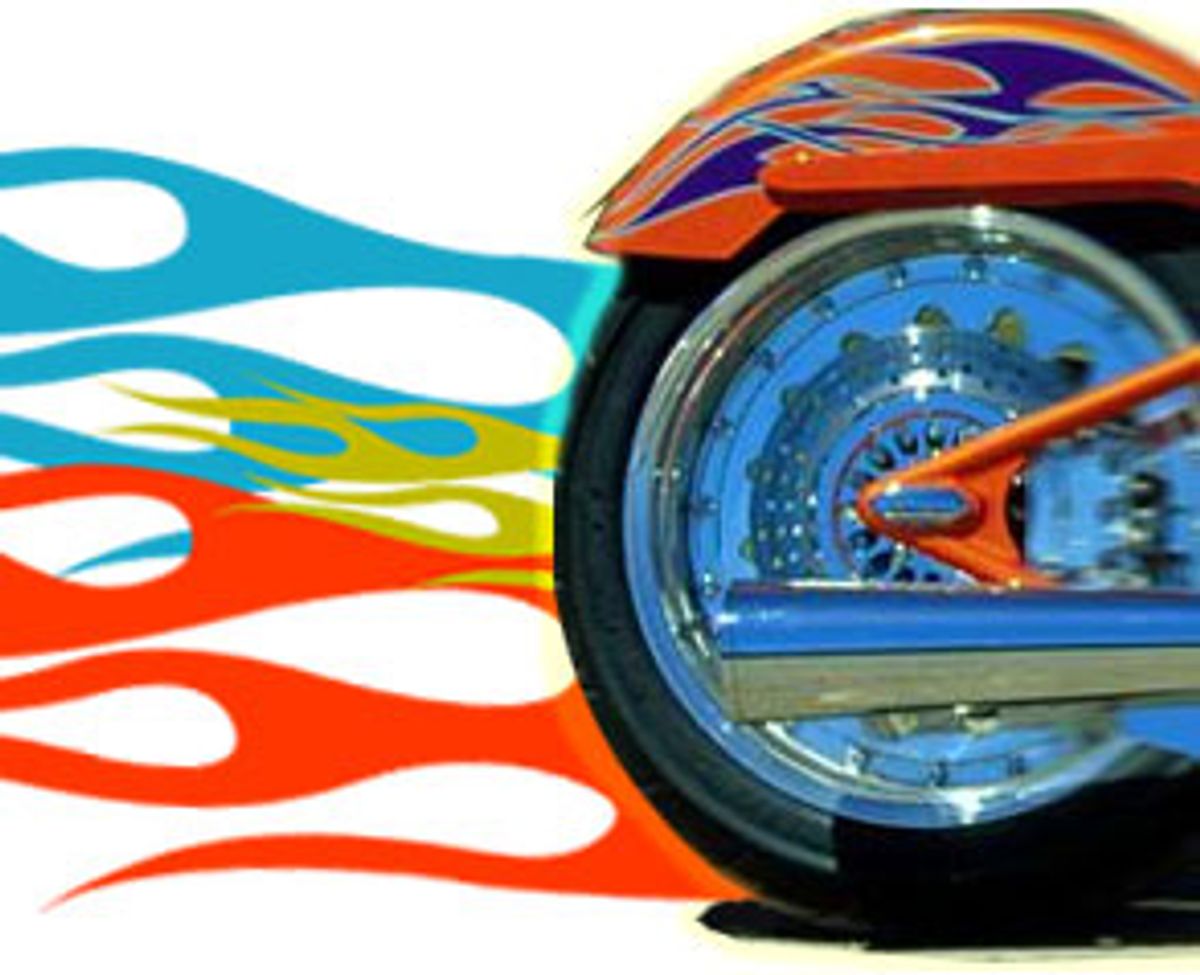 Back when he was the editor of Cycle magazine, Phil Schilling wrote what could have served as the Harley-Davidson Motor Co.'s official mission statement for much of its hundred-year existence.

Mechanically, Harley-Davidson motorcycles have improved considerably since Schilling wrote his edict 20 or so years ago. But the spirit behind the words hasn't altered one bit. The better Harleys get, the less some purists like them.

"Harleys have become civilized over the past few years and that's a shame. The last thing most people want is a mannerly motorcycle," said Elliot Borin, former editor in chief of Supercycle magazine. "Harleys don't even sound right anymore."

The classic Harley sound is pure machine music -- valves clattering, push rods jamming up and down, gears whining -- all rattling up through that thumping exhaust noise in an ascending roar. But the sound is a big problem for Harley-Davidson engineers, who have to carefully incorporate new technology into their factory-fresh models to suit modern environmental, noise, pollution and performance standards without destroying the sound, which the company considers to be a trademark and one of the fundamental reasons many people opt to purchase a Harley.

"I was 5 years old the first time I heard a Harley. I thought the heavens had opened up and that Thor was smashing the world to atoms," Dave Nichols, editor of Easyriders magazine, recalled. "You could hear that Harley thunder coming from miles away. It was, and is, the sound of rebellion. It is a sound as unique as American rock 'n' roll.

"Is the Harley sound as big an attraction to sales as Harley-Davidson thinks? Abso-fuckin'-lutely!"

The sound was created by engineering techniques that may have been cutting edge, or at least acceptable, when the first H-D hit the road, but they are not considered correct or efficient now. William Harley created the thumping staccato in 1907 when he opted to graft a second cylinder onto his one-cylinder engine design rather than whip up a true two-cylinder engine. Harley used a connecting rod to join two pistons to a single crankshaft. This, combined with Harley's V-shaped engine design, resulted in a rough rumble caused by pistons that don't fire at even intervals. And so the sound was born.

Spine-rattling vibrations that stress the bike's structure and components were a byproduct of that design choice. Due to all that shaking, rattling and rolling, classic Harleys tend to age rapidly, needing a lot of loving care to keep them road worthy. Happily the company over-engineers almost every component of the bike, so Harleys don't exactly break -- they just leak, snap, crackle and pop, something that more than a few of their owners can relate to.

But while the faithful want their Harleys to sound just like they always have, some of Harley's newest customers prefer to have the Harley look without the attendant performance and maintenance issues.

Finding a balance between building a contemporary bike that people can hop on and ride without spending three days in the garage prepping it, a bike that doesn't threaten to Mixmaster its riders' internal organs, and maintaining the Harley mystique is a major design and engineering challenge, but one that Harley-Davidson executives believe is absolutely essential to the continued success of their product.

The team responsible for keeping Harley's heart roaring is the 32-person "noise vibration harshness" engineering team, headquartered at the Harley-Davidson Product Development Center in Wauwatosa, Wis. The facility is closed to the public, even during the frequent factory tours that Harley sponsors for H-D devotees. Company employees of the non-engineer sort are also mostly kept out of what is one of the most sophisticated mechanical sound engineering facilities in the world.

NVH team members are involved in every step of the design process and are responsible for ensuring that any tweaks to the bikes that are intended to improve performance or to bring them into line with noise and environmental regulations also "protect or enhance" the classic sound, according to Deane Jaeger, manager of sound and vibration technology for Harley-Davidson.

"Changing an engine's specifications, even seemingly inconsequential changes simply intended to make the engine look better, can dramatically alter the sound," Jaeger said during a recent meeting of the Society of Automotive Engineers in Traverse City, Mich. "Every proposed change is evaluated for both performance and sound quality."

Harley-Davidson's NVH facility has a anechoic (echoless) chamber used for testing engines and transmissions and a semi-anechoic chamber for testing entire bikes. Naked prototype parts or complete bikes are placed in the chambers and cranked up full throttle. Robotic arms with an array of microphones and sensors then slowly rotate around the bike, capturing its sound and creating a digital profile of the noise and vibration it's producing.

The data is fed into Silicon Graphics workstations and analyzed using custom applications along with sound analytic software from LMS International. With the data collected from the chamber tests engineers can predict how sound from an isolated engine will sound when it's bolted onto a bike frame or how new design suggestions will dampen or amplify the engine's tone.

The sound data is also digitized and transformed into graphed sound waves and acoustic holography images so that engineers can visually check rhythm, roughness, and tone.

It's not all done with technology. Harley engineers are encouraged to trust their ears. And Harley's NVH facility also has a listening room where "juries" of 15 or so Harley-riding employees are occasionally ushered in to listen and pass judgment on new designs, voting on whether the bike sounds right. Similar tests are conducted off-site with Harley customers.

But despite all that effort and care, some loyal customers are less than thrilled with Harley's latest engines. The V-Rod, introduced in 2002, has been particularly castigated. Few fault the performance of the liquid-cooled, 1,130-cc, 60-degree V-twin engine, which Harley co-developed with Porsche. But the sound -- the classic sound officially described in court documents as the "potato, potato, potato" by Joseph Bon, Harley's trademark attorney, just isn't there. Some riders dismiss the V-Rod as nothing more than a "sweet potato."

"The V-Rod is the first Harley-Davidson engine built pretty much totally with computer engineering," said an H-D engineer who requested anonymity. "There were no actual prototypes built until right before we went into production. I think the computer work resulted in a great engine, but it is without that indefinable soul that our other engines possess."

"Harley-Davidson does an excellent job of balancing the mystique of their brand while moving ahead with technological improvements," Easyriders' Nichols said. "The V-Rod is a leap forward for Harley, and though sales are off to a slow start, the biker world will soon get used to the V-R platform. All you have to do is ride a V-Rod and you'll forget most of the reasons you thought your old shovelhead was so cool."

But some still aren't quite convinced.

"I took a V-Rod for an extended road test the other day -- more extended than the dealer probably expected, actually," said Cosmo, a longtime Harley rider from Brooklyn, N.Y. "Great ride, but it wasn't a Harley as far as I'm concerned. My ol' lady didn't hear me coming from a few blocks away, which confused and pissed her off. She likes having that early warning system."

Fortunately for people who like loud motorcycles, there's the Harley aftermarket -- a billion-dollar-a-year industry, much of which is devoted to producing and selling exhaust systems that take advantage of an important legal loophole: Exhaust makers can evade legal penalties for busting state noise-level laws by labeling their systems "for off-road use only."

"Everyone who rides a Harley and wants people two miles (or even 10 feet) away to know it, bolts on an "off-road use only" aftermarket exhaust," Borin said.

"EPA noise limits and emission requirements -- especially in California -- put paid to the classic, almost wide-open Harley pipes used on pre-Evolution-engine Harleys," Borin added. "The factory has tried very hard to tune their exhaust systems to match that sound, but there is no way in today's regulatory environment they can allow that much volume."

A good part of the official Harley accessory catalog is also devoted to loud exhaust systems, and many dealers strip off the stock exhausts and replace them with louder pipes before even putting the bikes on the showroom floor. And besides just liking the sound, many bikers firmly believe that loud pipes save lives, since drivers in four-wheeled "cages" so often just don't notice quiet motorcycles until right after their cars pull out directly in front of the bike.

"I'd much rather they hear my pipes than they hear the thud of my body as it lands on their hood and the smash of glass as my head goes through their windshield," Cosmo explained.

"The people at the motor company have to deal with a lot of governmental restrictions on emissions and sound levels, so yes, the new Harleys are fairly quiet," Nichols said. "Most folks do bolt on a set of aftermarket pipes to get back a little of that Harley rumble of old."

"But stock pipes or not, a Harley still sounds like a Harley. And to the faithful, it's sweet music indeed."

Michelle Delio is a freelance journalist based in New York City.