Flying in from the U.S., I joined the female "jockeys" who sold themselves to tourists for rum and money. But I did it to find my father. Part 1 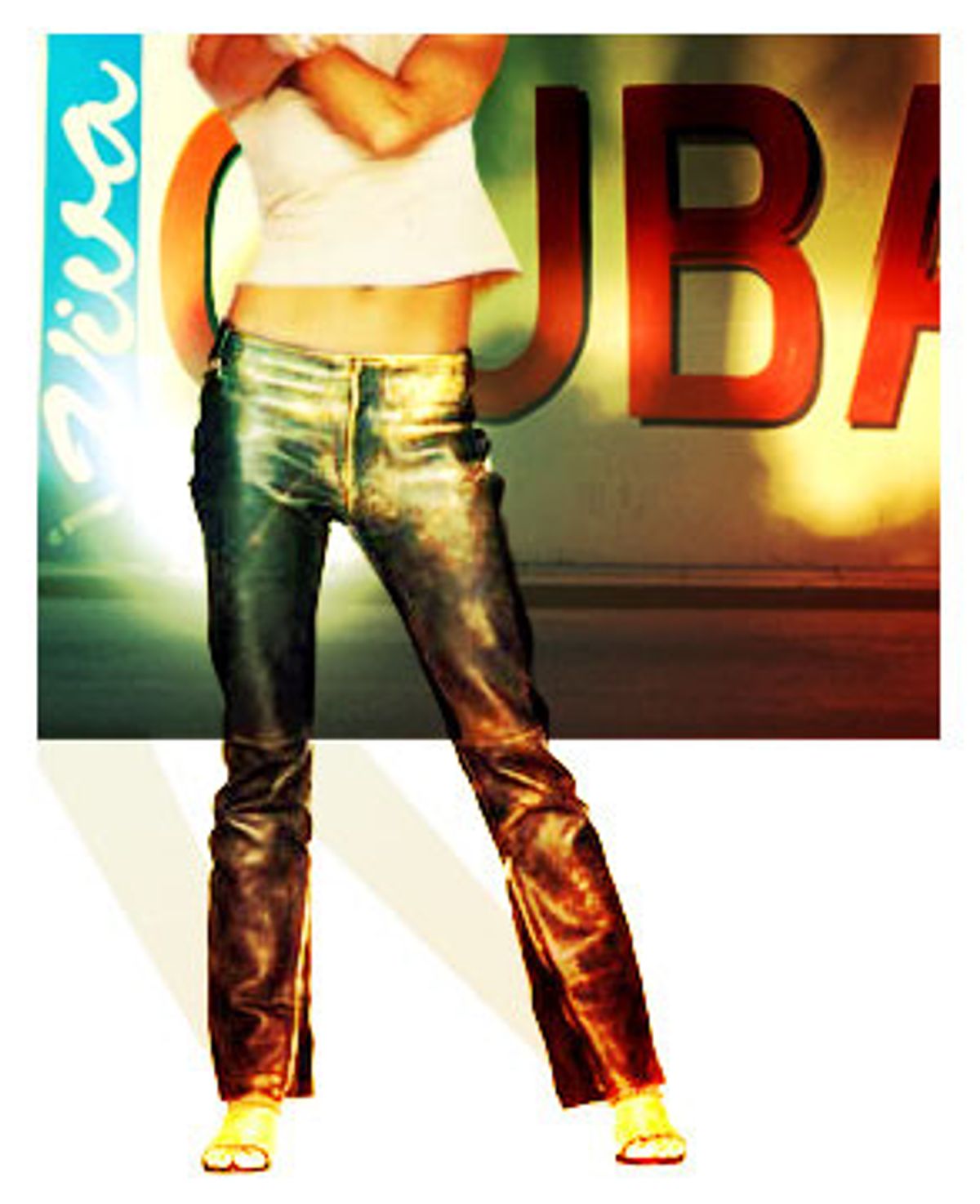 I feel his hand on my bare shoulder, and it's all over.

In the oppressive April afternoon, another's touch has the chilling effect of ice on a radiator. I've been sitting alone, in a cafe in Havana near the former Hilton hotel -- the one ransacked by communists and renamed Habana Libre. Free Havana.

The stacks of papers on my table are askew, some stained by the cafe con leche I chain-drink to keep my spirits up. He approaches me from behind. I look up, into a tanned face and silky blue eyes framed by deep lines. Late 50s, I guess, and not unattractive. He asks to sit. I shrug casually. He asks if I speak English. I nod. Then he asks for advice -- best bars, best beaches. My advice warrants a rum over ice, or so he measures, and he offers to buy me one.

I sigh. The papers are in a fantastic mess in front of me -- evidence of my baneful investigation -- and today has not been revealing the clues I'd hoped for. I pile the papers neatly. What the hell. A rum would be nice.

He smiles. I pretend, despite the mounting evidence to the contrary, that I'm a first-world girl in a first-world city being offered a friendly drink by an attractive man. That at the end of this exchange, we will trade business cards and a flirtatious smile and in a few days I'll find a message on my cellular and, who knows, there might be dinner and maybe a movie or a stroll and, you know, a date.

But I am not in the United States, my home, and he assumes he isn't sparring with an equal, a woman of his socioeconomic rank, give or take a few rungs in either direction. He rolls an ice cube on his tongue, momentarily losing himself to the pleasure of coolness amid the humid soup that is springtime Havana.

Another drink, then another. He talks only of himself in determined pontification, and asks no questions of me. It's how he signals he's expecting to pick up the tab. This one, and the next.

I ask where he's from. "America," he says with a mixture of pride and complicity, as do all Yankees who sneak into Cuba.

"It's Norte Americano," I say, playfully scolding. "We Cubans are offended that you claim the entire continent for yourselves." He isn't listening. Greedily, he takes in the size of my chest, the green jade of my eyes, the curve of one thigh crossed over the other.

"So," he says, leaning across the table. "I'm on the 11th floor of the Habana Libre." He looks at me expectantly, while holding the check in his hand. "What'll it be?"

I can't blame him necessarily for the blunder. The cafe's bathroom mirror is not kind in its judgment; cracked and faded, it reflects my freak-show appearance. These clothes, bought new in Miami nine months ago, are frayed from wear and harsh soap and sun. I carry my things in a plastic sack -- the Cuban girl's purse -- as my leather one had been stolen months before. My body, once a healthy Size 8, has shrunk to a gaunt Size 4. Hip bones jut out for the first time in my life. I am easily bruised. A Cuban diet does these things.

I am an American, in the sense that my passport says so, in that my university degree and professional stints and taxes paid cement my belonging to her. But I am Cuban. My first breath 25 years ago was Havana air, and my father -- as I recently discovered -- circulates the blood of Cuba in his veins.

I am Cuban-American. I noisily roll the moniker around in my head, like marbles in a tub: Cuban-American. The hyphen is the fulcrum, the teeter-totter that swings up and down. Some days I'm more heavily Cuban. On others, I weigh in more American.

But today, this day, as the man's condom-covered cock slides between my thighs and his chest spreads my breasts, as he heaves over me, pushing and pulling and pushing harder still, and as I run my nails hard down his spine, a painful reaction to the pleasure I didn't expect to feel, as his face crinkles and he collapses and rolls over and dresses and throws American scratch at my knees and as I gather the bills from the floor and tuck them into my bra -- isn't that what prostitutes do? -- and as I take the elevator 11 floors to the lobby and walk past the smirking guards, and as I pass through the doors into the cruel sun of the afternoon, it is then that I realize the teeter-totter has landed with a thud.

At that moment, I am only Cuban.

The lever on the 1970s Russian pay phone is stuck. Jiggle. Jiggle. Twenty centavos more do the trick.

"Camilla!" I shout, at last getting through the hospital switchboard. In the rapid, syllable-clipping Spanish everyone here speaks, I confess: "I slept with someone."

"Finally!" she says with her tinkling laugh.

She laughs harder. "You're a Cuban girl now," says my best friend here, a respected Havana heart surgeon a few years my senior. "Tell me."

Talking faster than a wet parrot, I relay the details of the afternoon into her sympathetic ear. Camilla's morality is like that of the majority of Cubans: Sleeping with foreign men and getting paid, usually in the form of clothes and perfume and money for family emergencies -- for something always seems to come up when a love-struck foreigner is around -- isn't actual prostitution.

There is a word, in fact, for women seeking out a rich boyfriend, either for marriage or regular remittances, and that word is "jinetera." Spanish for "jockey." Jockeying boys and girls are the hopeful light of their supportive families. For to jockey is to dream of a successful future, to dream in a country that feels so bereft of hope, of promising careers, of stable relationships. It's also the only way for many to make dollars, in a country where lawyers earn $18 a month and a meal in a restaurant costs twice as much.

I have no idea, so I root around in my bra for the money. "Two hundred," I say, a bit surprised.

"Dios mio. You're going to put us all to shame," she says, laughing again. "You blondes are always worth more. When do you see him again?"

"I didn't," I say, feeling I have let her down. "I refused to see him again, and so he made some snide comment about how if I wanted to be a good capitalist, I'd better learn to set a price upfront."

Camilla sighs. "You weren't being a bad capitalist, you were being a bad Cubana. These men here aren't looking for a one-night stand, they want a Cuban girlfriend while on holiday." Then, wistfully, her voice trailing off, she says: "If he gave you $200 for an hour, imagine a whole week."

Camilla is 33 and one of the sexiest women in a country of sexy women. Her hair is cropped short to showcase a graceful neck and a dancer's erect body. The $20 monthly surgeon's allowance doesn't pay for much, so Camilla has acquired a handful of foreign boyfriends who deposit money into her account each month. When they arrive in town a few times a year, she dutifully attends to them.

"I'm not going to be anyone's girlfriend," I say. "I've got more important things to do."

"Any news on your father?"

"I'm off to check," I say, and hang up. The raging sun is starting to set, and the line across the street for peso ice cream stretches down the block. La Rampa, as the street is known, is packed with boys who cuff their jeans like James Dean. Boys looking for men who love boys. Men with money to spend.

Shivering in the heat, I make my way home.

My landlady is asleep on the couch wearing polyester underwear in functional beige. A Cuban novella blares on the radio: A woman is sobbing because her husband won't stop banging her sister.

But my landlady doesn't stir. Pilar is a biomedical engineer, so depressed by the lack of satisfying work that she's sleeping her 30s away. I tiptoe past into the high-ceiling, Spanish-tiled rooms I rent illicitly. Our landlord-tenant arrangement is black market; the web of neighborhood-watch types she has to bribe to keep quiet is too complex for me to unearth.

I read my messages and dial. "Victor?" I ask into the receiver.

I wait by the side door for my Cuban spy. A government worker, Victor has access to classified records. He watches me carefully.

"You look different tonight," he says. "Anything wrong?" I shake my head, and we crouch on the creaky wooden staircase. Victor pulls out his notes, and modulates his vocal cords down to a whisper.

"Your family lived here in Havana under Mr. Carter, and was employed at the U.S. Interests Section." Victor adjusts his glasses. I stare at a slick chunk of hair that has slid rebelliously over his forehead. Victor's hesitation tells me he doesn't want to say what he's found.

"Your stepfather was born in Connecticut, worked in the diplomatic corps. Your mother, she was also American."

"From California," I say impatiently.

"Like all Americans, they were under routine surveillance while living here. The notes I found indicate your mother had repeat encounters with one Cuban male in particular. They appear to be, to have been, romantic."

I nod. My mother had told me as much, shortly before her death two years ago. In the haze of medicines that made her last days bearable, answers weren't forthcoming. She fondly remembered my father, insisting that he loved me, that he was in Havana, his whole family waiting, and that I should go find them.

The first year I came and went. No answers. No luck. Real penetration in Cuba is not for the foreigner. About eight months ago, I made the decision to stay. If my father was alive, as my mother believed, then I should find him, before what happened to my mother happened to him.

Victor gives me the papers. "I have dates, and a description of what may be your father. It's all in there." I take them gleefully, thinking I can cross-check them with my mother's meticulously kept agenda, copies of which I'd been poring over for weeks.

"Did they follow him? Was there an address, a place where they were secretive?"

Victor swats away the errant hair. "I can find out," he says. I interrupt him with an enthusiastic nod. "That, of course, will take some time."

It always takes time. It took six months to find Victor, to find someone with both access and willingness to disclose information. Using the same bills from the afternoon encounter, I pay Victor his bribe and kiss his cheek. It's the first concrete confirmation of my mother's account, and I'm both encouraged and daunted by the news.

Alysia Vilar is a writer who lives in Havana.